Review: Until Julius Comes, by Hannibal Elector, aka Richard Poplak 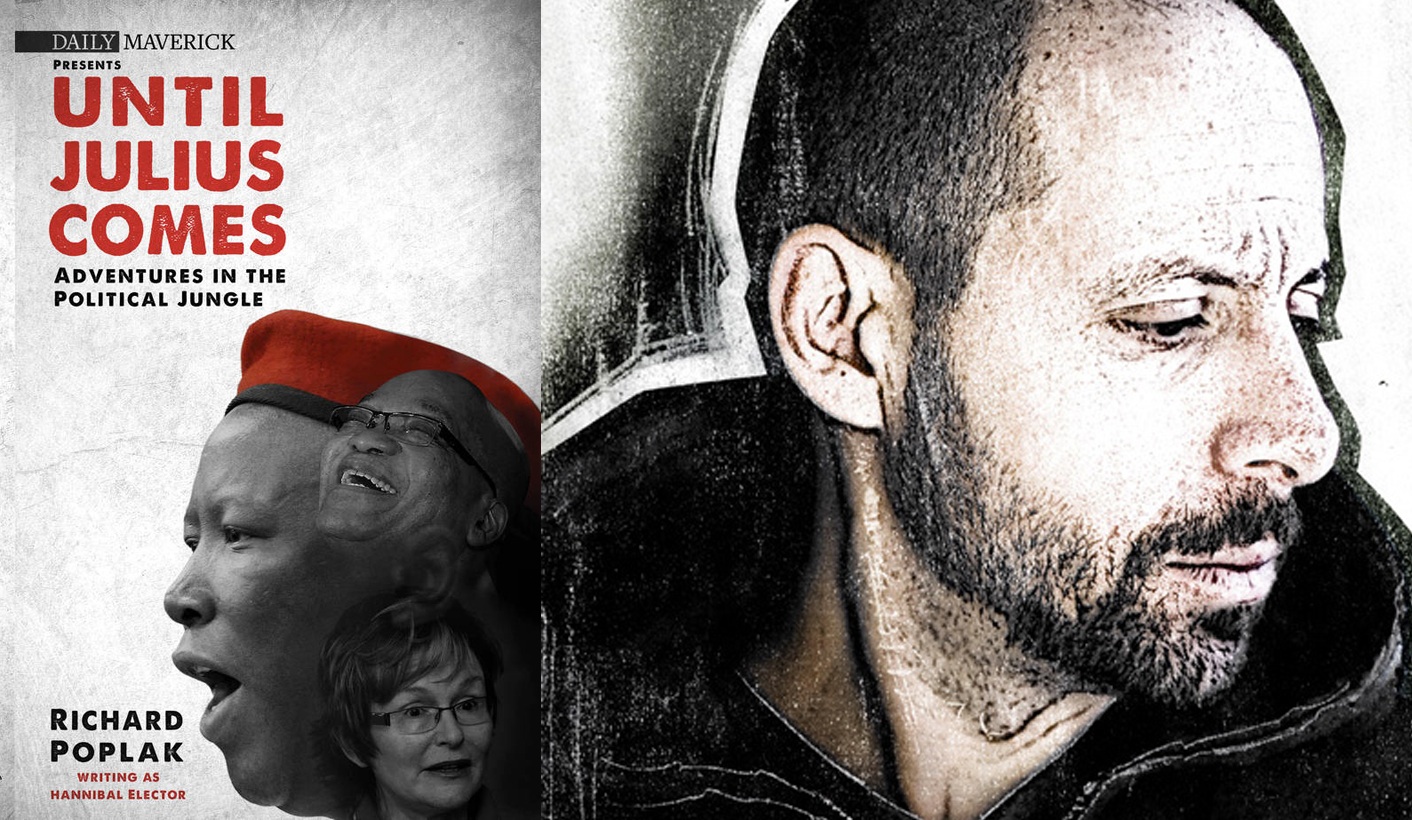 Richard Poplak takes the reader through a decidedly uncomfortable satirical ride through the South African political jungle. There are few survivors and it’s not for the faint-hearted. But you won’t be sorry you went. By MAUREEN ISAACSON.

Richard Poplak, aka Hannibal Elector, whose series of brilliant columns for the Daily Maverick, written in the heat of South Africa’s 2014 campaign trail are collected in this exciting offering, provides an unnecessary disclaimer.

The essays or reports, styled on Hunter S. Thompson’s gonzo journalism, aren’t intended as analysis; the author is bearing witness. The collection was not planned originally as a book; it ended up being one after a joint brainwave by the writer, Daily Maverick editors and the enthusiastic people from Tafelberg. But the salivating Hannibal Elector’s intentions were always made clear as he macerated his ambitious subjects, almost always severely compromised in the rush for the win.

Poplak’s sophisticated psycho-socio-philosophical literary framework reflects the manipulated reality that is the SA political landscape. The reckless pursuit of power and dictatorship which is the inevitable outcome of revolution, is a leitmotif. Its source is George Orwell’s 1984. Prince Mashele, the co-author with Mzukisi Qobo of The Fall of the ANC; What Next?  just so happens to be reading the book, when he comes along to his interview with Poplak. His prognosis is hardly encouraging.

Erich Fromm’s Escape from Freedom, which outgoing minister in the presidency Trevor Manuel quotes in his interview, stresses that “in the long fight for freedom those who fought against oppression sided with those enemies of freedom when victory was won and new privileges were to be defended.” It’s the way the privileges are sought and the justifications for these that make this battle of the titan zombies portrayed here so amusing and the portrait of Manuel is scathing.

Nelson Mandela’s death following the sham showbiz clamour throws us into a blank present where warring political parties such as the Democratic Alliance (DA) conjure metaphors of the past as they go about their futile business; in one instance, marching for jobs on Luthuli House. Helen Zille, in her avatar as Opposition leader, conjures a Braveheart warrior image – ever ready to swallow the livers of the vanquished – not unlike Elector himself, whose canvas is populated by the grossly grandiose men and women, unequal to the task of governing.

Zille appears to have used a software program to evaluate racial representivity before choosing her academically achieved party candidates and she has inadvertently produced a new brand: the Blue People. “A blue person can have any coloured skin or religion,” is her inclusive war cry. The spectacle of political campaigning is overlaid is with a layer of state bullying executed by the fraudulent matric-faking Hlaudi Motsoaneng, arch censor and acting-COO of SABC who finds reason not to air adverts by the DA as well as the Economic Freedom Fighters (EFF). Motsoaneng clearly overestimates the public broadcaster’s power and its refusal to air material does anything but cause the substance of it to go away. Anyway, the DA’s not going anywhere, its failed attempt to merge with Agang notwithstanding, the EFF’s not only here to stay – but its Commander-in-Chief (CIC) Julius Malema will replace Jesus finally, as per a quote from one Moss Mamashaite’s The Moving Finger Writes Vol 2.

German cultural theorist Walter Benjamin provides the lens through which we are shown that the fusion of politics and aesthetics has only one destination: war. Poplak writes: “Transformed into images, these are no longer people with inner lives and local needs, but units of exchange for power.” The EFF’s Wiekus Kotze, the Afrikaner man wrongly depicted as a confused buffoon afflicted with a chronic case of jungle fever turns out to be not so bad after all.  With two decades of grass roots organising under his belt, Wiekus is actually valid. Suspended from Agang by Mamphela Ramphele, whom he calls “the worst party leader alive” he was quickly snapped up by the EFF and welcomed at a public rally as if he were an Idol. Just why Ramphele is really deserving of this pejorative is spelled out by Poplak’s unpacking of “the poisonous packaging of her biography”. His description: “She looks shaved to the bone, raw, the only thing keeping her from dissipating into the dust is her makeup. She attempts to smile but it doesn’t work. Her face looks like a death mask.”

The absence of mercy, the facility for insult, like his fluent and often lyrical prose, is the strength of this gifted satirist, though every now and then I catch my breath – for instance the descriptor of Motsoaneng as ‘trash’ doesn’t sit easily with me, albeit possibly in keeping with the rambling writing on the hoof for the “dustbin of history”. I don’t think Poplak gives a damn whether his readers sanction his expressions or perceptions, including that Wiekus’s mixed-race child is an “embodiment of reconciliation”; though Poplak’s surely not serious about this. EFF commissar for land and agrarian reform, Andile Mngxitama’s talk about “the impossibility of reconciliation”, is more comprehensible than its counter by the DA’s Mmusi Maimane that “reconciliation lies in each individual recognising the unique identity of every other individual.”

Laugh we may, but the reading of this book is uncomfortable and bruising because it throws up the shocking contrasts of inequality we live with. The husk of the planet in the sci-fi movies that are his reference reflects the fierce clash of the desperate conditions of places such as Bekkersdal with, for instance, those of Cape Town (a colonial way station to top up on craft beer, sashimi and seaborne air while keeping natives underfoot).

The deep faultlines of poverty are threatening to blow up in our faces, as we read; for we all bit-players as subjects of Flappy Zuma, the creature in the eponymous game, who at least in this game will forever succeed in dodging the law and therefore be forever in charge. And the SA of which he is in charge is nothing less than a botched smartphone app. Its consequences are dire and their portents are dark, for this it is: this no-holds-barred uncritical landscape of South African politics that makes possible attacks by Phumlani Mfeka, the 25-year-old CEO of Mazibuye African Forum (MAF), a new radical forum in KwaZulu-Natal on the Indian community. The call for Indian exclusion from affirmative action and black economic empowerment programmes is backed by the similarly racist sentiments of ANC’s first president John Dube and the organistion is not alone; the Imbumba Empowerment Business Group first called for Indians to be banned from KZN tenders then denied it.

The often funny and informative chapters about the ANC leaders and their often irrational justifications as well as those of Julius Malema, notwithstanding, Poplak’s gifts of portraiture stand out in this collection. Ronnie Kasrils, interviewed in his Killarney apartment redolent with the aromas of the traditional Jewish cooking of neighbours who dislike him because of his dislike of Israel is one of the few to get out of the Elector project alive.

Kasrils comes out well not only because he’s succeeded in preserving his Marxist Leninist culinary preferences – for a ‘man salad’ symptomatic of the apparently simple lifestyle which conjures a past where Comrades used to live AMG-less lives, in a future that could not have foretold the current upmarket eateries and raspberry juice. His Sidikiwe Vukani campaign entreating voters to cast their ballot for anyone but the ANC is a bold move, coming as it does after five decades of struggle by the man once armed and dangerous. It takes us back to a time “when men and women with ideals went to fight for something other than kickbacks”.

Key among the achievements of this collection is its successful dismantling of not only the ANCs Good Story and of every other attempted good story, all of which fall down in the face of overwhelming venality and opportunism. The story Poplak brings to the table is not a happy one, but his telling of it is superb. DM

Until Julius Comes: Adventures in the Political Jungle by Richard Poplak is published by Tafelberg.