Prince Albert Arts Festival: An ancient space in the heart of the Karoo, regenerated 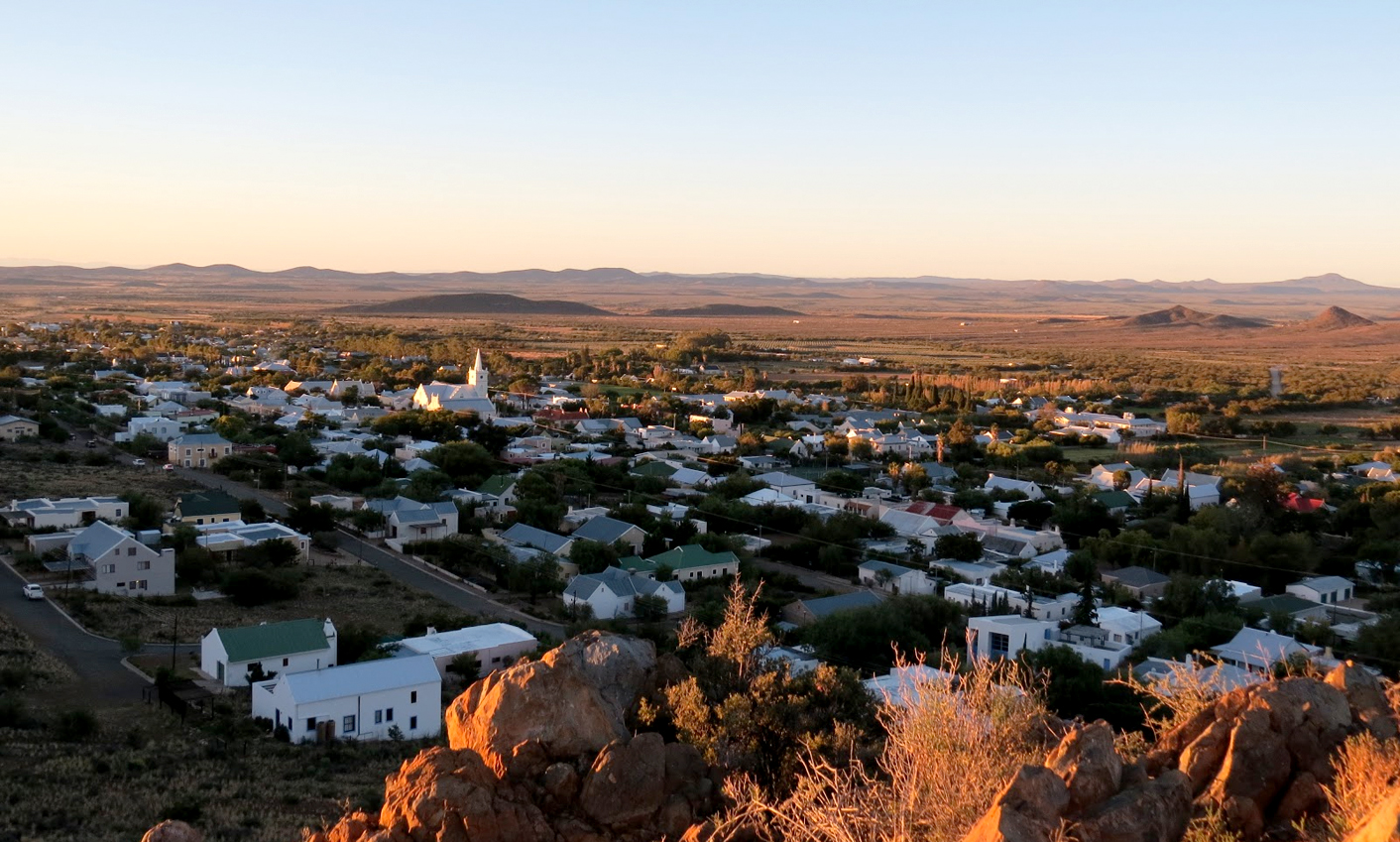 The first artists to make their mark near the Karoo settlement of Prince Albert were the Khoi-San, who interpreted this beguiling arid, ancient stretch of territory on the walls of caves and rock faces. In the 21st Century a host of significant contemporary artists will be exhibiting work during the town’s second arts festival from September 18 to 24. By MARIANNE THAMM

Prince Albert is not on the road to anywhere. It is a Karoo (from the Khoi word Karusa) dorpie you have to plan to visit. There are three roads to the village; over the breathtaking Swartberg Pass or via Meiringspoort or from N1, linking the Central Karoo to the coast.

Prince Albert, 390km from Cape Town and “home” to the character Anna K in JM Coetzee’s 1983 Booker prize-winning novel, The Life And Times Of Michael K, is a geographical space heavy with intersecting histories and cosmic significance. In Coetzee’s novel, Michael K returns to the farm of his mother’s birth to find it abandoned by its white owners, the labourers forcibly removed, the territory hostile to his very existence.

There is no place in South Africa today where the ghosts of history do not prowl, howling to be seen, heard and acknowledged, and Prince Albert is no different. But the alluring and spectacular beauty of the landscape cannot help but beguile and mesmerize, and it is this that has no doubt attracted a new generation of settlers (a word too not without controversy in South Africa) as well as visitors from across the globe.

From its ancient arid plains and those who first roamed here through to the establishment of the first farm in 1762, the mini gold-rush that took place in 1891, the Anglo-Boer War, the forced removal of Apartheid-era South Africa to the more recent phenomenon of a reverse migration of professionals to the village, Prince Albert offers not only “deafening silence and peace” but also an opportunity to engage with a variety of issues.

Prince Albert, population around 15,000, has been abuzz these past few weeks. There are two issues that have got townsfolk talking and both are somewhat interrelated. The first is a paper published by two Wits academics, Melissa Styen and Haley McEwan, and titled “Hegemonic epistemologies in the context of Transformation: Race, space, and power in one post-Apartheid South Africa”. The paper offers a searing critique of, well, as the title pretty much suggests, the competing historical, cultural and political currents that swirl beneath the apparent rural tranquility.

In 21st Century post-Apartheid South Africa these are not issues that those who might fall into Steyn and Haley’s category of “semigrant power elites” are unaware of or are unwilling to address or grapple with. These are new migrants who, while they might isolate themselves geographically from bigger cities, are conscious of the legacy – cultural, political and also environmentally – that cannot be ignored.

The organisers of this year’s festival, Prince Albert Gallery owner, Brent Philips White, co-owner Mary Anne Botha and occasional resident Jennifer Cohen, describe the village they call home as “a rural town with limited prospects for young people. And twenty years into our democracy, few have the confidence to engage socially, or to participate as citizens of a new South Africa. We aim to switch people onto art – we can introduce new skills and ways of solving problems. We can change mindsets and nurture an understanding of creative thinking and the value of art in communities like our own”.

The first festival, held in 2012, proved enormously popular with variety of artists including William Kentridge, Strijdom van der Merwe, David Goldblatt and Michael Subotsky exhibiting in some 17 venues. The impending second arts festival, titled PArt14 and which takes place from September 18 to 24, has seen much frenetic preparation in the village. Around 80 artists will be exhibiting at various venues that will also host workshops, lectures and film screenings.

Botha, an artist, has lived in Prince Albert for 15 years and attributes the migration of professionals to the village to technology and the greater mobility connectivity to the Internet offers those who are able to work from anywhere in the world.

The village has also attracted a community of creative people, including the South African-born artist who now lives in Belgium, Philip Badenhorst, as well as author Eben Venter, among others. It is also a popular tourist destination that has helped to revive the economy somewhat.

“There has been an influx of people who would not have, in the past, relocated here. There has been a lot of development and building. The village also has a unique character and a Karoo aesthetic that people find attractive,” she said.

However, it was also a town still typically beset with divisions imposed by Apartheid, with the majority of the region’s coloured inhabitants confined to North End Township on its outskirts.

Tourism, said Botha, had brought a measure of employment to the region but it was still plagued, as are so many small South African villages, towns and cities, with many issues including poverty and unemployment.

“The gap between the rich and the poor exists here as it does everywhere else and there are some initiatives that attempt to address these. We still have a way to go,” she said.

The more recent inhabitants in the traditionally white part of the village include people from across the globe, more English-speaking South Africans in what was traditionally an Afrikaans-speaking region.

“Falko1 is coming from Cape Town and will create several pieces of public art and Usha Seejarim is creating a pebble mosaic in an attempt to link the socially divided space,” said Botha. (Seejarim created the official portrait for Nelson Mandela’s funeral in Qunu.)

Some of the exhibitions and projects include a showcase of photographs by Peter Magubane titled “The Struggle is no Struggle without documentation” on loan from ABSA, a series of artists workshops underwritten by Thupelo and that will see the work of 20 selected artists in the Skougrond, as well as a group show curated by artist Alex Hamilton and featuring the work of Hannelie Taute, Conrad Botes and Brett Murray.

There will also be photography and painting workshops, including landscape and portraiture classes, as well as participatory art projects will be ongoing throughout the week, including an Instagram photo walk.

Unlike the West Coast town of Darling, that has seen a revival mostly due to the arrival of two of its now famous inhabitants, Pieter-Dirk Uys and Evita Bezuidenhout, the Prince Albert revival is more of an organic social phenomenon with no single, identifiable point of regeneration. The prices of farms and plots in the region as well as property prices have been steadily rising and it is impossible to find anything with an existing house in the village for under R1 million.

The idea of reverse migration, where the poor are forced to move to big cities while the mobile rich retreat to rural enclaves is a distinctly 21st Century global phenomenon. It is a movement that is still in progress and the ultimate desired outcome – more for everyone – is an imperative collective objective.

There might be those who scoff at the ability of art to address the social problems and needs of a region so steeped in history, but as someone once said, and I forget who, there are three ways to make sense of the world: religion, politics and art. And the first three are unreliable. DM