The Morning Men: A glimpse into waste collectors’ lives 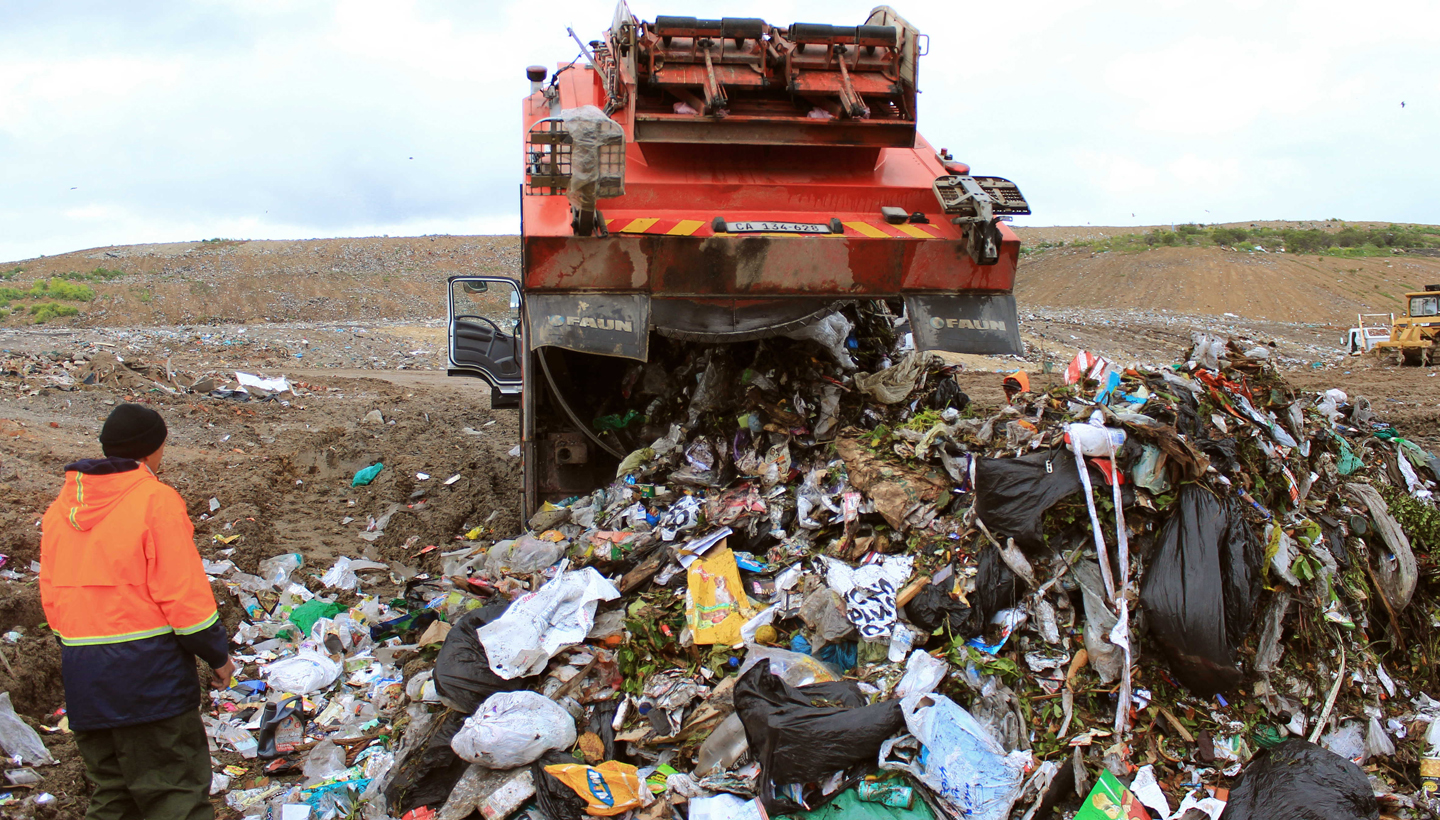 Each day, Cape Town collectively produces 6,000 tons of waste. Cape Town’s solid-waste management system is designed to both clean the city and encourage action amongst the general public to minimise waste. But they are best known to the suburbs as those sulphurous trucks that collect our rubbish once a week. By BRAD HARRIS.

To spend a day with these men and women is an eye-opening experience. The Woodstock depot on 25 Beach Road is buzzing by six thirty in the morning, with orange jackets darting in the sheets of rain between the trucks and grey buildings, and voices rising above the downpour to organise their near departure. Unexpected is the cleanliness of the depot – perhaps from the storming downpour, the trucks are glistening and the floating smell is only earthy, not unpleasant.

Nomathemba Mpofu, referred to as “the inspector” by crew members, gathers the Rondebosch crew to inform them of a journalist’s presence. It’s all smiles, friendly taunts between the crew and urgent hoots from the trucks in the background. This crew is made up of five men: Ivan Marcus, the driver, Ismail Fritz, Redewaan James, Rashied Isaacs and Patrick Mettler. All of them have been working in the solid-waste department for around twenty years. In fact, Ivan is now coming up on his thirty-year anniversary within the government department. They are professionals of the service industry.

If they work at a pace, the hold could be filled within one and a half hours.

They are eager to tell their stories of what they have collected along the way, as strange and disturbing they may be. Ivan remembers sadly how babies have been found inside the bins in the Mitchell’s Plain area, although he admits this is seldom. In amongst the waste they collect in Rondebosch, Ismail says they have found working computers, a PVR and even R200 in notes. They need to get the items cleared at the police station, but can keep anything they want to.

The trucks leave on schedule, just before seven in the morning, and within ten minutes this crew of five is on the Rondebosch streets. The route is second nature to Ivan, so when the truck stops and the hold starts turning, there is hardly a breath taken. The efficiency of their collection is impressive: bins are kicked out, wheeled and hooked onto the truck, then a short lever is pulled, the bin flips over to pour out its rubbish and they are wheeled back from whence they came. It sounds so simple. It is simple, but not nearly as easy as it sounds. There is no break.

Gulls dominate the skies at Vissershok Landfill, stealing what garbage they can to survive.

“Ja, we could fill the truck in an hour and a half… if they work at a pace like now, because of the rain,” remarks Ivan. “A full load is about thirteen tons, but the truck’s hold will stop turning when it’s full. So we can’t overload really.”

Ivan started as a fuel pump technician nearly thirty years ago and worked his way up. He now drives a different route each morning, always working with a different crew. His upcoming pearl anniversary gets him thirty days of paid leave, which he could exchange for cash, but shrugs to inform that he probably won’t.

The crew with their inspector – left to right is Nomathemba Mpofu, Rashied Isaacs (front), Patrick Mettler, Ismail Fritz (middle) and Redewaan James (back).

What they refer to as “the council” are trying to change a policy that has been around since the horse-and-cart days. At the moment, the crew can go home whenever they finish their work. This means that they can work as hard as they want, and often get to travel home around two o’clock. For some who travel far, like Redewaan James, whose home is in Mitchell’s Plain and who wakes up at four-thirty each morning, this is precious time.

Ismail Fritz still finds joy in the day, despite the muddy mess of landfills.

The council wants them to stay until at least three in the afternoon. The change in policy is only a rumour now, but they don’t feel like they have a choice in the matter.

“The guys don’t even take tea or lunch breaks,” says Ivan, while Ismail bites into a ham sandwich. “We just eat on the go.”

“They never ask us questions, not even when they hold meetings,” says Ismail, packing the remainder of his sandwich away. “They just tell us what’s going to happen and do it.”

Yet the job does not attract many complaints from the crew. They remark how the men you work with turn into your family and, while Rashied jokes about starting a band, Redewaan debates the Israeli-Palestinian conflict while hanging onto the back of the ever-advancing truck. These men spend most of their time together, and time spent doing this unglamorous job serves as a deep bonding experience for the workers. It is soon apparent that there is far more behind their smiling greetings than a simple satisfaction to be employed.

Ivan Marcus, the crew’s driver, takes a break to smile.

“I think it’s got a lot to do with trust,” explains Redewaan, jumping off the truck as it squeaks to a stop. A resident has left their gate open and Redewaan simply walks through to collect the bin from their patio. “We understand if people forget to take it out… if I could sleep later, I would.”

But he cannot sleep later, or he risks being late for work and faced with disciplinary action, and soon may only arrive home later.

Redewaan James believes his job has a lot to do with trust.

That sour and sulphurous smell begins arriving as the truck gets heavier with residents’ waste and, by twenty past nine, Ivan makes the call to empty the hold.

The truck would usually empty at the Athlone plant, but it has been closed for eighteen weeks and the council has given little reason why. Presumably it is being renovated.

Rashied Isaacs dons his blue poncho to work through the pelting rain.

“They’re killing us,” says Ivan, frowning. “We’d usually get it offloaded so much quicker, but now we have to drive out to the Vissershok landfill. That’s like forty minutes!”

Still, the drive is made and during the forty minutes is debated the role of their unions. SAMWU, South African Municipal Workers Union, and IMATU, the Independent Municipal and Allied Trade Union, look out for the crew’s interests when they cannot do so for themselves. Yet they are making little effort to fight another rumour of their annual sick days being reduced. In a job where other people’s unknown waste is handled constantly, the council is, according to the crew, considering reducing their twelve annual sick days and the unions are not in disagreement.

“We don’t understand it,” says Ivan, turning into the Vissershok landfill entrance. “But what can we do if it happens?”

The officials calling him onto a ramp distract anyone from answering him and, after it has been cleared, Ivan moves the truck between the rising waste piles.

Vissershok landfill is enormous. Once inside, you cannot see its borders and the sky is almost blacked out by gulls, crows and other scavenger-birds. This morning’s heavy rain has turned the roads and piles of waste into blue-grey sludge that makes loud squelching noises when you walk. Here, against one of the lower peaks of waste, Ivan parks the truck and Ismail jumps out to look for obstructions. Upon Ismail’s call, Ivan presses a button and the truck begins spewing out its morning’s collection: over fourteen and a half tons of residential waste. It only takes ten minutes and then the crew are in a rush again, to return to Rondebosch and finish their job – they never need to collect more than two loads, which means they are halfway through the day. In lifted spirits, they leave the landfill and max out the truck at one hundred kilometres an hour all the way back to the suburbs.

Every morning they run past residents’ doors, smiling while emptying their rubbish bins in the winter-rain or cold morning-air. Perhaps not happy to do the job, but neither are they unhappy, because it isn’t their entire life. It is only a job and they are professionals. DM

Main photo: Emptying the 14.54 ton load at Vissershok Landfill before returning to fill the hold again. All photos by Brad Harris.