The language debate: Lets talk about everything else… in Afrikaans 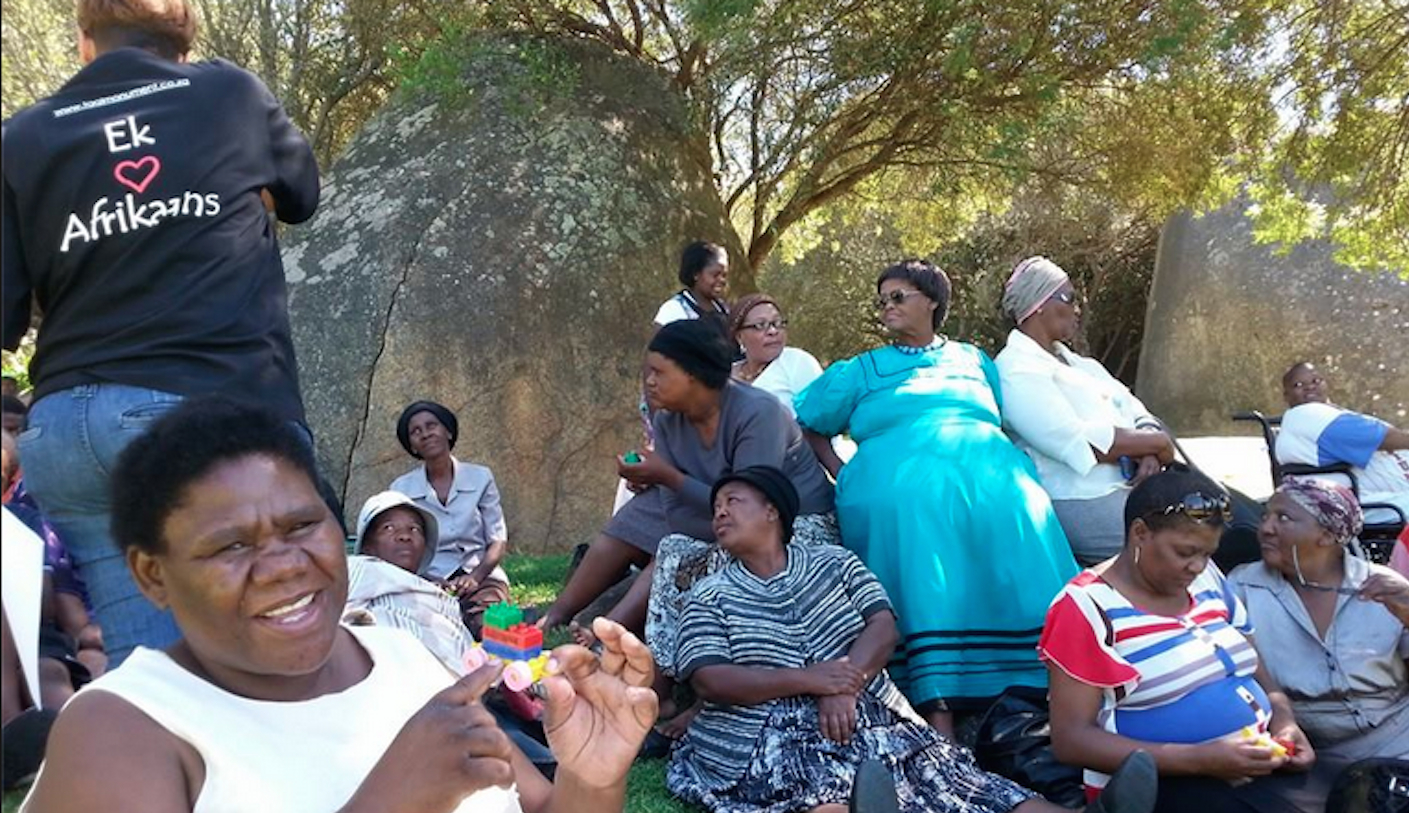 Publicly and in the media, you’d swear the only thing Afrikaans speakers talk about or debate in their own language is the language itself. Like an ox wagon jammed in a rut, some language activists have shut down the horizons of conversation and public discourse. By MARIANNE THAMM.

There’s a little station in the small West Coast town of Darling where satirist Pieter-Dirk Uys made his home after taking a wrong turn en route to McGregor in 1995. It was clearly pre-GPS, because McGregor is in the opposite direction, in the Breede River, about 220km from Darling. While Pieter Dirk Uys’ satirical compass is spot on, his map reading skills clearly leave much to be desired.

It is in this small town, nestled among dairy farms, that Pieter-Dirk first bought an old house and later the derelict station in Arcadia Street, that he turned into Evita Se Perron and which has since become a world-renowned theatre and tourist attraction in the region.

Over the years, Evita se Perron has grown and now sprawls out of the original corrugated iron station building. There’s a restaurant, a public garden next door as well as an arts and crafts gallery. Uys has also curated an extraordinary unofficial museum – his Boerassic Park – that attracts not only international visitors, but also a healthy crop of Afrikaans speakers from across the country who spill out of tour buses regularly throughout the year.

The walls of Evita se Perron are covered in Afrikaner memorabilia, artifacts and political kitsch from the Boer War through to the height of the Apartheid era from 1948 to the late 1990s. There are tapestries of the Voortrekker Monument, old “whites only” signs, busts of some of the most illustrious Afrikaner leaders including Hendrik Verwoerd, the architect of Apartheid. Today Verwoerd serves as a lampshade. Throughout the day, old, popular Afrikaans folk songs, many last heard in the previous century, loop through the venue.

Uys says he has not attempted to make any statements about what visitors should think or feel about what he has chosen to display in his “museum”. He would prefer people to experience and mine their own responses to what they find there. Uys says he often spends time in his dressing room while transforming into Evita eavesdropping through the thin walls on the conversations between three generations of Afrikaners who visit his theatre/museum.

“The older people who remember Verwoerd, the grandparents, come in and they get all nostalgic about seeing all the stuff. They can’t help themselves and often haven’t seen it for years. Their children laugh it off or think it is awful. It’s then that the grandchildren, the New South Africans, ask questions like ‘Granny, what is this Whites Only sign?’ And then it is up to Granny or Grandpa to explain,” said Uys with a twinkle in his eye.

This week the Daily Maverick visited Darling and the Perron for the filming of Uys for the 21 Icons Project series, currently being screened on SABC3. While we were there, a busload of Afrikaans- speaking tourists from Kimberly arrived and shuffled through the venue, clearly delighted and surprised to find so many reminders of a contested past and language on display. I watched a little old lady perk up visibly as she took a bite of her melktert and the old folk song “Die Oukraalliedjie” drifted from the speakers in the restaurant.

At first she seemed unsure that she was allowed to enjoy a song she clearly knew and loved. She looked around at other diners for some direction but soon surrendered to nostalgia and began bobbing her head and tapping her fingers, a smile spreading across on her face.

And that’s the thing about history. How much of it can you salvage if you happen to be white and to have found yourself on the wrong side of it? How much of it are you still allowed to remember fondly, how much nostalgia are you allowed to feel for a song, a photograph, a popular Nationalistic painting or tapestry that once hung almost in every Afrikaner household?

How do you wrestle your language from the cold and ruthless grip of history and politicians who used it as a weapon against fellow South Africans? Post-war Germans grappled with this question and many still do. White Afrikaans speakers, too, continue to re-imagine themselves in post-democratic South Africa but debate about the language has grown increasingly shrill in the past 15 years.

Part of the reason for this is that conservative organisations and language activists – including Dan Roodt and singer Steve Hofmeyr – are well organised, know how to work the media and attract a disproportionate amount of publicity in the English press because of their usually controversial statements or attacks on others. Progressive white, Afrikaans speakers, their achievements and their participation in the wider transformation of the country seldom get a look in. What is of concern is how younger speakers – both white and black – of the language can and will define themselves in the midst of all this clamour.

Afrikaans is one of 11 of the country’s official languages and is, according to the 2011 census, the third largest language in South Africa, spoken by about 13.5 percent of South Africans of ALL races. By all accounts it is thriving, as I pointed out in a column last week. And just this weekend it was reported that three Afrikaans films, Pad Na Jou Hart, Faan se Trein and Vrou Soek Boer, were the highest grossing local films at the box office with Pad raking in R11.5 million between January and June.

There are those who lay exclusive claim to Afrikaans and feel that the language is under threat and “dying”. Among those is the reactionary Dan Roodt, who angrily drowns out any debate or discussion.

But the thing is, Afrikaans, as a language, existed long before the idea of an Afrikaner nation was conjured. It was the slaves in the kitchens of Dutch settlers who developed it and the first known writings in this “kitchen Dutch” were in Arabic script and written in the 1830s. A movement to create Afrikaans as a “volkstaal” began in 1896 with the first Afrikaans Taal congress that took place in Paarl (where the Taal Monument is situated today).

Afrikaans only became an official “language” in 1925 and its founders, in an attempt to remove traces of its “creole” roots and origin, attempted to have it viewed as a Germanic language, labelling it Afrikaans-Nederlands.

JC Kannemeyer, an authority of Afrikaans literature, in his “Die Afrikaanse Literatuur 1652 – 2004” writes, “In Kaapstad is Afrikaans hoofsaaklik deur die gekleurde bevolking gebruik” (In the Cape, Afrikaans was largely used by the coloured population).

In a PAESA occasional paper titled “The Rise and Possible Demise of Afrikaans as a Public Language”, Professor Hermann Giliomee wrote, “By the 1930s there were fewer than two million people who spoke Afrikaans as a first language. Yet the language would achieve something exceptional. Heinz Kloss observed in 1977: ‘Unless we consider Arabic an African tongue… Afrikaans is the only non-European/non-Asiatic language to have attained full university status and to be used in all branches of life and learning … All other university languages have their main basis in either Europe or Asia.’ He added: ‘There is a strong likelihood that of the new university languages outside Europe (new ones as against old ones such as Japanese, Arabic or Chinese) only Hindi, used by some 250 million speakers, Indonesian by 100 million speakers, and Hebrew match the development of Afrikaans.’”

Giliomee goes on to cite Jean Laponce, author of Languages and Territories who remarked that Afrikaans, Hindi, Indonesian, and Hebrew “are possibly the only languages that in the course of the twentieth century were standardised and came to be used in all branches of life and learning, including in both undergraduate and postgraduate teaching, and in science and technology”.

Of course there are continuing concerns about the survival of Afrikaans as there are for other indigenous languages in South Africa as English has become the dominant means of communication. Professor Wannie Carstens, chair of the Afrikaanse Akademie vir Wetenskap en Kuns, made a considered argument at the weekend with regard to finding a solution to various issues pertaining to Afrikaans, particularly as a language of instruction at traditionally Afrikaans universities.

Carstens argued that a solution should be found for multi-lingualism on the country’s campuses.

“We must know beforehand that the only solution for Afrikaans (and African languages) lies within a multicultural context” and also that “Afrikaans and race must not become entwined”.

The station at Evita se Perron serves as a metaphor for Afrikaans speakers right now. Two opposing camps – those who are fiercely possessive and who feel threatened, sit on the one platform while those who would like to see it flourish, are seated at the other. What follows then would be the equivalent of the opening scene of Woody Allen’s film Stardust Memories, where two trains are standing idle side by side before starting off in opposite directions. Allen’s protagonist, Sandy, finds himself in a carriage with hostile and unsmiling passengers with the doors and windows locked. The other train is filled with really happy people drinking champagne and having a party.

Sandy, in the unhappy train, tries to get out and begins to argue with the conductor before he and his fellow passengers are deposited on a seaside garbage dump where they wander aimlessly around the debris. Dan Roodt and his ilk are on the unhappy train while the rest of us are on the other.

Afrikaans belongs to everyone. It existed before the notion of the Afrikaner and as one Afrikaaner remarked this week that “it will exist after Afrikaners”. Hopefully by then we’ll be talking about everything BUT Afrikaans in Afrikaans. DM