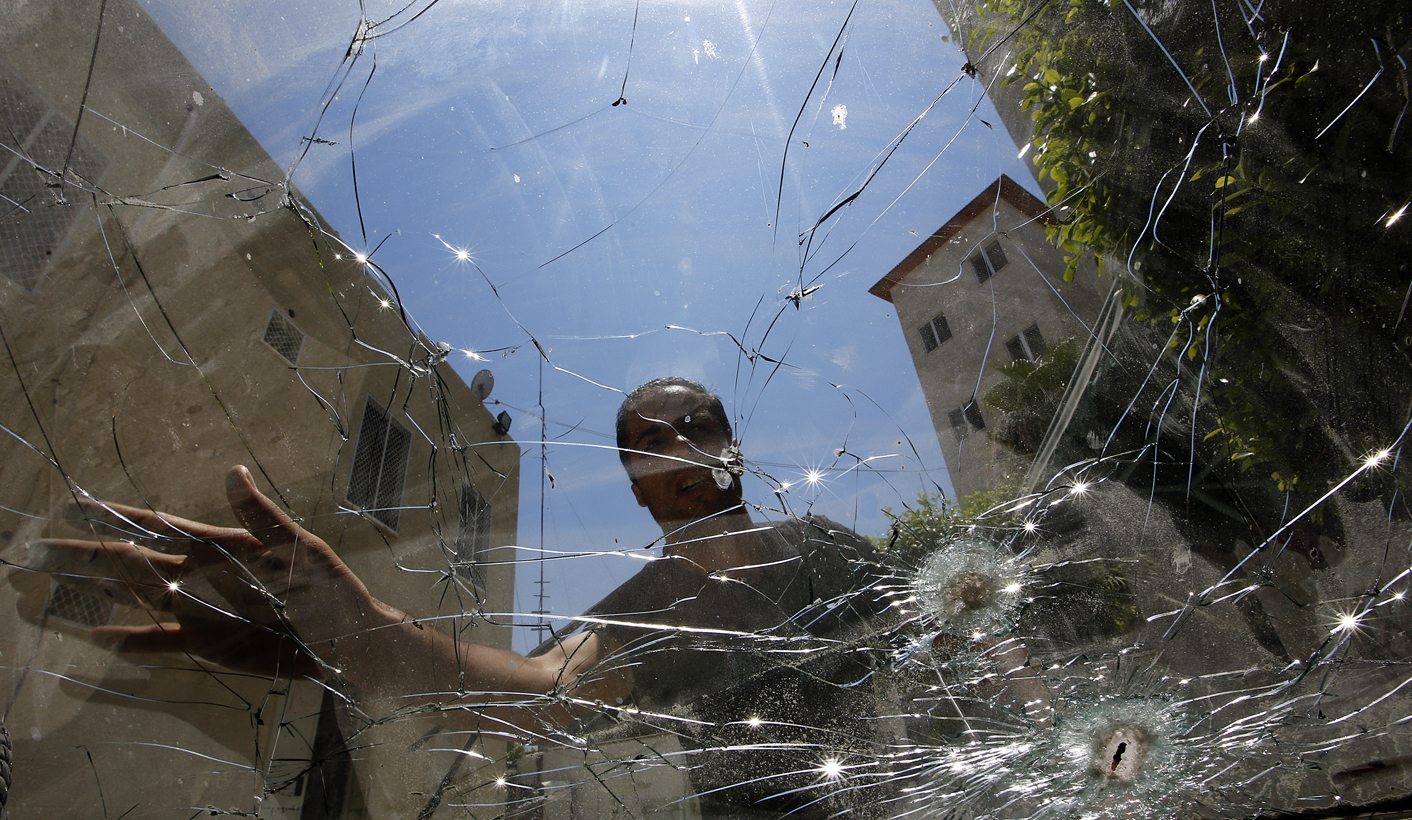 Gaza fighting raged on Wednesday, displacing thousands more Palestinians in the battered territory as U.S. Secretary of State John Kerry said efforts to secure a truce between Israel and Hamas had made some progress. By Nidal al-Mughrabi and Crispian Balmer for Reuters.

In a blow to Israel’s economy and image, American aviation authorities extended a ban on U.S. flights to Tel Aviv for a second day, spooked by rocket salvoes out of the Gaza Strip, with many other global airlines also avoiding the Jewish state.

Hamas leader Khaled Meshaal, speaking in Qatar, praised the group’s fighters, whom he said had made gains against Israel and said he supported a humanitarian truce but a ceasefire would only be acceptable in exchange for easing Gazans’ plight.

“Let’s agree first on the demands and on implementing them and then we can agree on the zero hour for a ceasefire… We will not accept any proposal that does not lift the blockade… We do not desire war and we do not want it to continue but we will not be broken by it,” he said.

Adding to the pressure on Israel, U.N. High Commissioner for Human Rights Navi Pillay said there was “a strong possibility” that it was committing war crimes in Gaza, where 687 Palestinians, mostly civilians, have died in the fighting.

She also condemned indiscriminate Islamist rocket fire out of Gaza and the United Nations Human Rights Council said it would launch an international inquiry into alleged violations.

Israel denied any wrongdoing. “Get lost,” Justice Minister Tzipi Livni said on her Facebook page in response to the investigation.

Kerry met Palestinian President Mahmoud Abbas, U.N. Secretary General Ban Ki-moon and a grim-faced Netanyahu on Wednesday. He was due to return later in the day to Egypt, which shares a border with Gaza and has mediated with Islamist Hamas.

“We have certainly made some steps forward. There is still work to be done,” said Kerry, on one of his most intensive regional visits since the peace negotiations he had brokered between Netanyahu and Abbas broke down in April.

Kerry has been working through Abbas, Egypt and other regional proxies because the United States, like Israel, shuns Hamas as a terrorist group. Hamas brushed off the U.S. diplomat’s appeal, saying it would not hold fire without making gains.

“Our interest and that of our people is that no agreement should be made before the conditions of factions of resistance are met,” Hamas spokesman Sami Abu Zuhri said.

Israel launched its offensive on July 8 to halt rocket salvoes by Hamas and its allies, which have struggled under an Israeli-Egyptian economic blockade on Gaza and angered by a crackdown on their supporters in the nearby occupied West Bank.

After aerial and naval bombardment failed to quell the outgunned guerrillas, Israel poured ground forces into the Gaza Strip last Thursday, looking to knock out Hamas’s rocket stores and destroy a vast, underground network of tunnels.

“We are meeting resistance around the tunnels … they are constantly trying to attack us around and in the tunnels. That is the trend,” Israeli military spokesman Lieutenant-Colonel Peter Lernersaid on Wednesday.

Israel announced that three of its soldiers were killed by explosive devices on Wednesday, lifting the army death toll to 32. Three civilians have also been killed in rocket attacks out of Gaza, including a Thai labourer hit on Wednesday.

The military says one of its soldiers is also missing and believes he might be dead. Hamas says it has captured him, but has not released a picture of him in their hands.

Many other foreign carriers, on heightened alert after a Malaysian airliner was shot down over a combat zone in Ukraine last week, followed suit. Israeli carriers continued to operate.

“Hamas’s success in closing the Israeli air space is a great victory for the resistance, a terrible failure for Israel that wrecks the image of Israeli deterrence,” said Hamas’s Abu Zuhri.

The Tel Aviv stock exchange and Shekel were flat, with traders showing little concern about the flight stoppages.

Clouds of black smoke hung over Gaza, some 65 km (40 miles) south of Ben Gurion, with the regular thud of artillery and tank shells filling the air, sending thousands of civilians fleeing from the town of Beit Hanoun in the northern Gaza Strip.

“This is not war, this is annihilation,” said 17-year-old Hamed Ayman. “I once dreamt of becoming a doctor. Today I am homeless. They should watch out for what I could become next.”

Palestinian medics said two worshippers were killed and 30 wounded in an attack on a mosque in the heart of the densely populated Zeitoun neighbourhood in eastern Gaza City.

A Palestinian protester died after a confrontation with Israeli forces in the West Bank.

And in southern Abassan and Khuzaa villages, residents said they were besieged by Israeli snipers who wounded two Palestinians as they tried to emerge from hiding with white flags in hand.

The Israeli army also seized Wafa hospital in eastern Gaza, saying it had been used to shelterHamas fighters – a regular complaint from the military. Patients were removed ahead of time after receiving warnings of the pending assault.

Israel named four commanders of Hamas ally the Islamic Jihad, that it said it had killed in recent days.

Egypt has tried to get both sides to hold fire and then negotiate terms for protracted calm inGaza, which has been rocked by regular bouts of violence since Israel unilaterally pulled out of the territory in 2005.

Hamas, which refuses to recognise Israel’s right to exist, has balked at Cairo’s original proposal, wanting its conditions to be met in full before any end to the conflict.

These demands include the release of hundreds of Hamas supporters recently arrested in the nearby West Bank and an end to the Egyptian-Israeli blockade of Gaza, which has stymied the economy and made it near impossible for anyone to travel abroad.

The war is extracting a heavy toll on impoverished Gaza, with Palestinian officials saying that at least 475 houses had been totally destroyed by Israeli fire and 2,644 partially damaged. Some 46 schools, 56 mosques and seven hospitals had also suffered varying degrees of destruction.

“There seems to be a strong possibility that international humanitarian law has been violated, in a manner that could amount to war crimes,” the U.N.’s Pillay told an emergency session at the UN Human Rights Council (HRC) in Geneva.

Netanyahu reacted furiously to news of the planned U.N. investigation, aware of the damning report into Israel’s 2008/09 Gaza operation, which killed more than 1,000 Palestinians.

“The decision today by the HRC is a travesty,” he said in a statement. “The HRC should be launching an investigation into Hamas’s decision to turn hospitals into military command centers, use schools as weapons depots and place missile batteries next to playgrounds, private homes and mosques.” DM