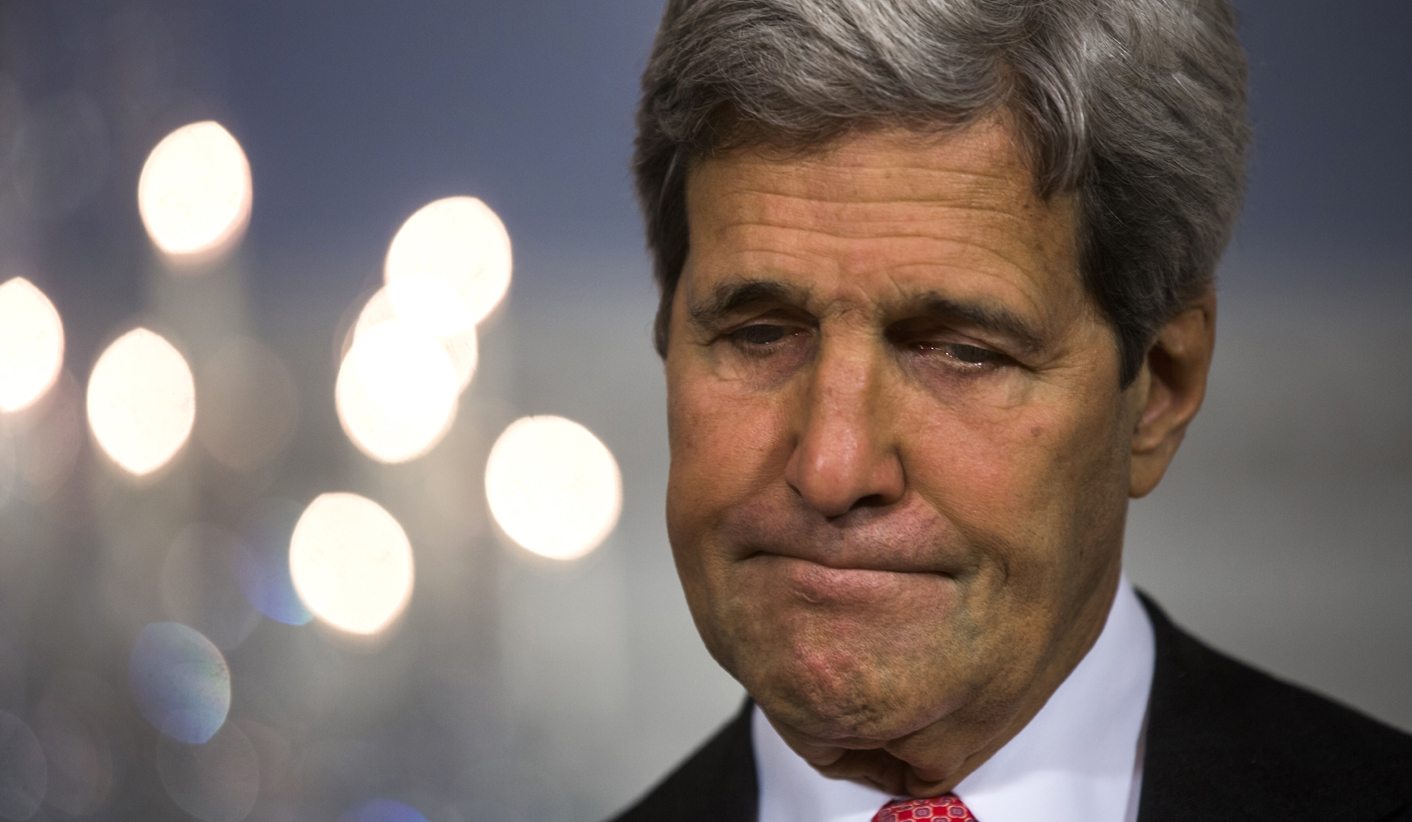 U.S. Secretary of State John Kerry began a diplomatic push on Monday to secure a cease-fire between Israel and Hamas, but senior U.S. officials acknowledged this would be difficult. By Arshad Mohammed and Yasmine Saleh for Reuters.

More than 500 people have died in the Gaza Strip fighting, the vast majority of them Palestinians, as Israel has pursued an air and ground offensive to stop rocket attacks on its territory from the Hamas-dominated Gaza Strip.

Kerry began his consultations, which are expected to include meetings with top officials in Egypt and possibly elsewhere in the region, by meeting U.N. Secretary-General Ban Ki-moon in Cairo on Monday night.

“We’re deeply concerned about the consequences of Israel’s appropriate and legitimate effort to defend itself,” Kerry said as he and Ban posed for pictures before their talks, according to a U.S. reporter who attended the picture-taking session. “No country can stand by when rockets are attacking it.”

“But always, in any kind of conflict, there is a concern about civilians – about children, women, communities that are caught in it,” he added, announcing that the United States would provide $47 million in humanitarian aid to help Gaza residents.

Kerry plans to stay in Cairo until Wednesday morning and has no currently scheduled end to his trip, which may entail talks with officials from Qatar. The Gulf state has relatively close ties to Hamas and hosts its leader, Khaled Meshaal.

“Our goal is to achieve a cessation of hostilities as soon as possible,” one senior State Department official told reporters as Kerry flew to Egypt. “We don’t expect it will be easy, though. This is a very complicated dynamic.””

Among the complexities are the fact that the United States has no direct contact with Hamas, which it views as a terrorist group, and so must work through proxies such as Egypt and Qatar, which have their own tensions with the group and each other.

Qatar was a strong supporter of the former Egyptian government led by Mohamed Mursi, which was ousted by the Egyptian military and its then chief Abdel Fattah al-Sisi, who has since been elected Egypt’s president.

“The effort to reach a cease-fire this time around is going to be in some ways more complicated than it was in 2012,” said a second U.S. official. “The region is more divided now.”

Mistrust between Egypt and Hamas has also complicated efforts to end the bloodshed in Gaza, where 536 mostly civilian Palestinians, including almost 100 children, have been killed according to Gaza health officials. Israel says 25 of its soldiers have also died, along with two civilians.

Hamas, an offshoot of the Muslim Brotherhood, has rejected Cairo’s truce proposal, saying it was not consulted and that the terms were unacceptable.

But there are signs that Egypt, which has long regarded itself as the most effective mediator in the Arab-Israeli conflict, may show some flexibility and amend the initiative, three Egyptian officials told Reuters.

“Egypt does not mind adding some of Hamas’ conditions provided that all involved parties approve,” one senior Egyptian official said, without giving details.

Among Hamas’ conditions are the lifting of the Israeli and Egyptian blockade on Gaza and the release of several hundred Palestinians arrested by Israel last month during its search for three Jewish teenagers abducted in the occupied West Bank. The trio were later found dead in a killing Israel blamed on Hamas.

But Egyptian Foreign Minister Sameh Shukri said Cairo has no plans to revise its cease-fire proposal, saying it guarantees the opening of border crossings between Egypt and Israel.

“The initiative clearly states that border crossings get opened after a cease-fire and when security stabilises,” Shukri said at a news conference with U.N. chief Ban in Cairo.

“If you really want to discuss all these conditions it will take a long time … I’m urging that unconditionally that violence must be stopped by both sides,” said Ban.

Egyptian officials suspect Hamas rejected the cease-fire plan at the urging of Qatar, a strategic player in reaching an effective deal as host to many exiled Islamists from across the Middle East, including Hamas’s Meshaal.

U.S. officials made clear that they were hoping for a quick cease-fire with few conditions attached to it, saying they would then turn to the underlying causes of the Hamas-Israel conflict.

“Nothing will be resolved by any cease-fire, temporary or long, without really getting to those issues at some point and that’s what we need to do,” Kerry said as he met Ban. DM

Photo: US Secretary of State John Kerry and Luxembourg’s Foreign Minister Jean Asselborn (not pictured) speak to reporters before holding a meeting at the State Department in Washington, DC, USA, 16 July 2014. Secretary Kerry used the opportunity to speak about Israel’s airstrikes into Gaza. EPA/JIM LO SCALZO