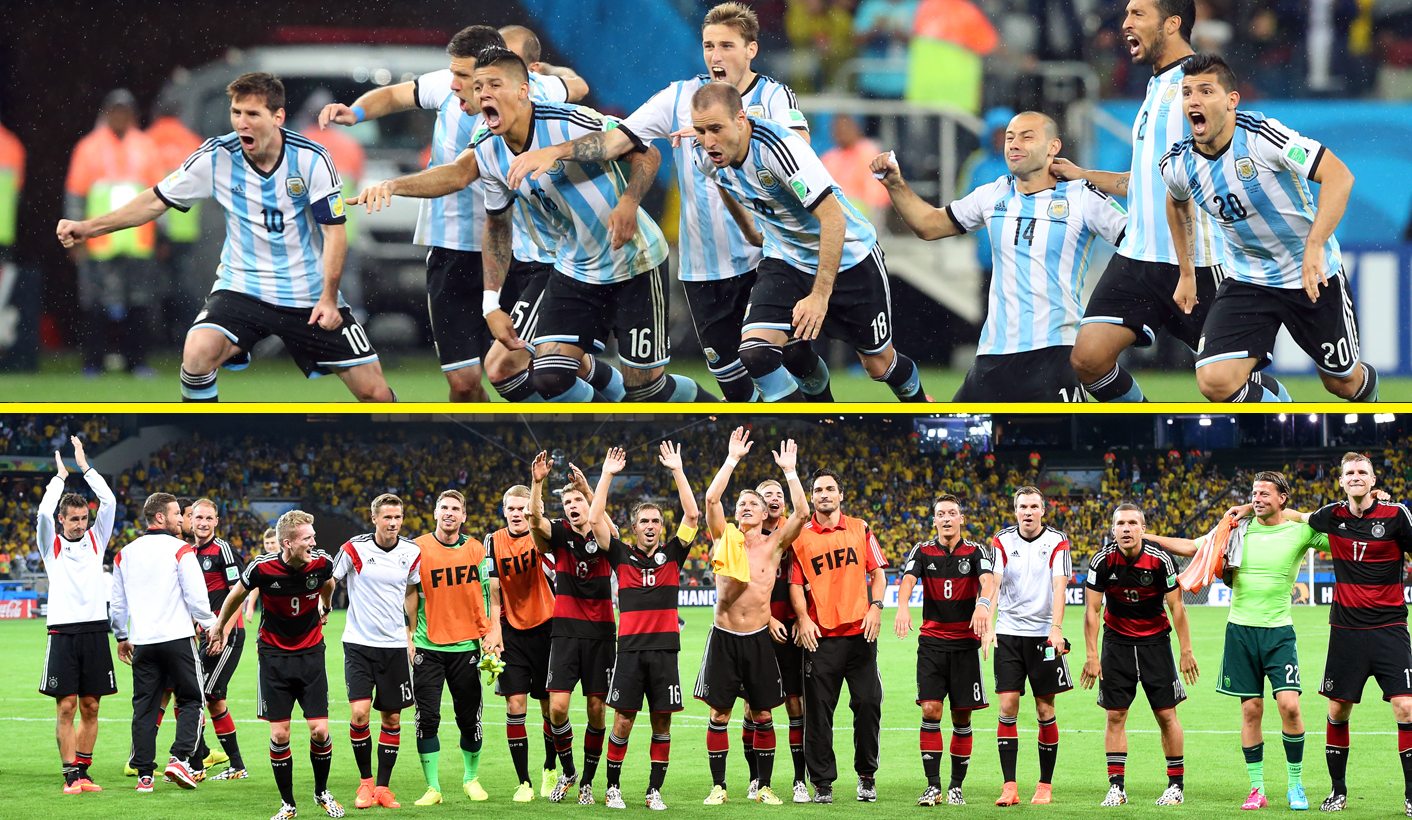 It’s almost over. One of the most enchanting World Cups is coming to an end when Germany and Argentina square off in the final on Sunday. One team has been brilliantly rampant, the other, irksome and persistent; it could be a final to remember. By ANTOINETTE MULLER.

Anyone searching for a narrative for the 2014 World Cup final doesn’t have to look far. (West) Germany and Argentina have both been here before, twice.

The spoils are shared between the two teams, so memories of playing each other in World Cup finals are mixed. Feelings over Germany and Argentina this time out will be mixed too. The two teams have been polar opposites throughout the tournament. Germany, who have been so sublime and enchanting through the tournament will come up against an Argentine team who likes to suck all the life and joy out of its opponents. So much so that their performances become the kind of thing reserved for purists, as well as anoraks through which to proclaim their superiority.

Right from the start, Germany have looked like match-winners. Barring a blip against Ghana, they have been unrelenting in their attack and composed in their celebrations. After meeting Brazil 7-1, Joachim Low stood by the touchline almost expressionless. Toni Kroos was pleased, but not jubilant and Manuel Neuer was furious after his defense made one mistake. When asked afterward why they were so subdued after such a historic win, the answer was simple: We still have one game left to play.

Argentina, meanwhile, have saddled up their luck and rode it like the Gauchos they are. Often under pressure, often with their backs against the wall and sometimes not looking good enough, they have scraped and scampered their way to this final. A combination of individual moments of brilliance, tactical precision and implosion from the opposition has led them here and now it’s time to prove they are more than just the sum of their luck.

Football is not an individual sport, but one individual must be lusting after success. Lionel Messi, brilliant and celebrated as he is with Barcelona, has a most curious relationship with his homeland. Argentina feel indifferent about him not only because he has not reached epic heights wearing the shirt of their country yet, but also because he never played in the domestic league (he was snapped by Barcelona when he was 14). Against Holland, he was mostly anonymous.

In Rosario, there is nothing to commemorate that he is one of the country’s most famous sons. Even the bars there bear no evidence that Argentina has produced such an outstanding talent, possibly the greatest of all times.

Even at the ground where he played for Grandoli FC as a kid, there is nothing to indicate an affiliation with him. This World Cup might have changed some of that as Messi has had some illustrious moments. He’s been unselfish. With the ball glued to his feet, he’d rather pass to somebody he knows has a better shot than him. But even for all his skill and dedication to the team cause, he has not yet lifted a World Cup.

Germany have proven to be far more adaptable than Argentina this year. The Argentines have often opted for a vertical counter attack, sitting deep and leaping goalwards to maximise the effectiveness of Messi, Sergio Agüero and Gonzalo Higuaín. Where they have struggled is when a side clocked what they were doing and refused to be drawn out and get caught on the counter. In March this year, Romania held the South Americans to a goalless draw by doing that. Iran nearly managed it at the World Cup and in the semi-final, Holland did the same.

Germany would have studied this and be aware of their own weaknesses. But there is unlikely to be another 7-1 thrashing. Argentina are going to try to squeeze Low’s side just like they did Holland. Germany have had the advantage of an extra day’s rest, strength in depth and the impact of super sub André Schürrle.

Detractors would say that Germany peaked too soon, that they only played for 30 minutes in their semi-final while Argentina played for 120 in theirs. But sport is played in the mind as much as it is on the pitch and Germany’s mindset is beyond focussed. They also hold fond memories of thrashing Argentina 4-0 during the 2010 World Cup in South Africa, but there is nothing to get too over confident about. No European team has ever won the World Cup in South America. History beckons for Low’s team and in their way stands a side driven by a talisman who isn’t even celebrated in his homeland. On paper, it is Die Mannschaft’s game to lose, but this is the World Cup. And it’s not just any World Cup, it’s the best World Cup in recent memory. Buckle up, things could get messy. DM

Argentina have the slight edge in all matches played between the two sides, both putting 28 goals past each other.