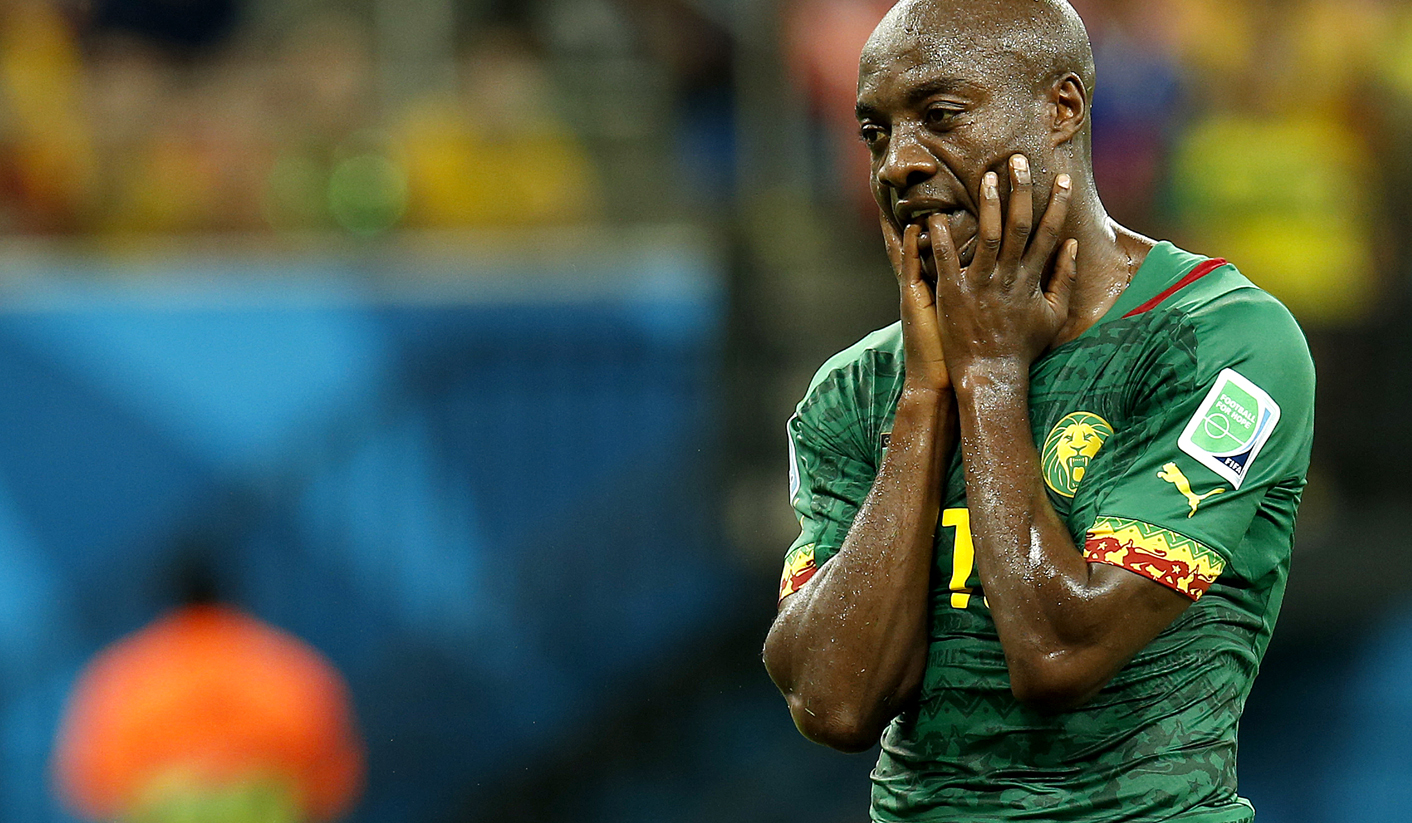 Cameroon’s World Cup campaign has been a shambolic embarrassment, not just for the country, but also for the game of football. By ANTOINETTE MULLER.

Forgive the lazy narrative, but Africa’s hopes at the 2014 World Cup are looking pretty grim. While Algeria has been the most impressive and most organised African side so far, Ghana’s showing has been unfathomable, Nigeria’s has been lacklustre, and Ivory Coast has shown flickers of promise.

And then there is Cameroon. With zero points from their games so far and Brazil to come, Cameroon looks likely to extend its embarrassing record of having lost the last six World Cup matches, the worst record of any African country.

The Indomitable Lions, perhaps, have been the most embarrassing and the most disappointing. Prior to the start of the World Cup, the Confederation for African Football (CAF) had promised they would fight for more African team spots at the World Cup, provided they had a case to show for it. Cameroon has single-handedly written off that case.

Imagine having to be the guy from CAF who tries to argue in favour of more qualifying places when all you have to show for it is poor discipline and lacklustre performances. More spots will certainly help raise the profile of African football, but as it stands, there simply is not an argument for it.

Not only have Cameroon’s performances been woeful, their general demeanour has been embarrassing. Alex Song’s elbow chop on Mario Mandzukic, which earned him a red card, was foolish and unprofessional. The 26-year-old apologised for his actions later, saying:

“I’m very sad at the moment as I feel I have let my country and myself down. It was a stupid moment and I’m truly sorry. If I could do anything to take it back I would. Please forgive me.”

Sorry he might be, but stupid he is too. Considering Song had time to think about what he was about to do, it will surely go down as one of the most foolish things of the World Cup so far. It’s easy to get swept up in the moment, but it’s not the kind of thing you’d expect from players when their team is chasing the game.

Add to that Benoit Assou-Ekotto’s head-butting of Benjamin Moukandjo, his own teammate, and his raging afterwards, and you have one volatile concoction of shameful behaviour that clearly speaks volumes of a team in disarray. Samuel Eto’o had to restrain Assou-Ekotto in the tunnel after the match to stop him from running after Moukandjo in a blind rage.

Coach Volker Finke had to try to explain exactly what happened afterwards and could not understand what exactly caused the bust-up.

“It’s unimaginable. I saw this happen and I need to find out exactly what happened, why exactly these two players exploded. I hate to see that. It’s not the image of Cameroon I want to project,” said Finke.

But the coach should not be surprised. Assou-Ekotto’s ill-discipline and complete disregard for playing for Cameroon is nothing new. In 2011, he was fined $1,980 for not appearing at the tournament in Morocco despite being called up. The fine was later rescinded, which perhaps tells you all you need to know about the federation: they do not set an example of discipline.

Should a player who behaves like that really be part of the team? Of course you want your best eleven out on the pitch for all tournaments, but when those players cannot be bothered to behave cordially, they do not deserve the privilege of a World Cup place.

Cameroon’s problems do not end there. There was also the pre-tournament drama of arguments over win-bonuses. The team reportedly refused to board a plane to Brazil until they managed to secure better bonus payment deals. But they have not won, and that incident is only making them look like a group of prima donnas with an inflated sense of what they deserve.

Cameroon has been in seven World Cups, more than any other African team. Yet they have managed to progress from those group stages just once, back in 1990, when the team was the surprise package of the tournament. Since then, they have done nothing but fall from grace. Roger Milla’s hips did not lie for this disaster.

The implosion of the team the World Cup is nothing new. Anyone who has followed or watched this team over the last few years will know that this World Cup shambles is simply the embodiment of a deeply fragmented and divided side. This is not a professional sports team, it’s a dysfunctional family which has now aired its dirty laundry for the world to see. And, for lack of a more creative narrative, it has shamed its continent too.

Player strikes have been part and parcel of their reputation, with Eto’o often leading the rebellion. He was banned for eight months in 2011 for a leading a player strike. Initially suspended for 15 games, the ban was changed to be only for eight months after the president of country asked officials to reconsider the sanction. Then, in 2012, while on duty for his country in a qualification playoff match for the Africa Cup of Nations, Eto’o refused to play. He said there were issues that were “amateurish and poorly organised” within the national set-up. Once again, politicians had to intervene to convince Eto’o to play and he agreed to do so in the second leg. The team still failed to qualify for AFCON.

Eto’o is one player who has often been outspoken about how much the officials of African football disrespect its players. But has anyone ever questioned the disrespect shown by players from Cameroon to their country? While they might have reason or frustration, there has to be a certain amount of professionalism shown by the players on duty.

Eto’o often speaks about the problems facing the team in the broadest sense, but never really elaborates. From the outside looking in, it looks like powerplay and manipulation from both sides. It cannot go on.

So what is the solution? If there is an issue with money, then FIFA needs to investigate where exactly the problem lies and implement the necessary measures. CAF cannot be trusted with such delicate matters and while FIFA has its flaws, it has task teams who can deal with such matters. If there is foul play of such catastrophic levels as players suggest, then ban the federation until they can get their house in order.

While Eto’o was once loved and adored in his home country, when he still had success on the pitch, it seems as if even those who once backed his tantrums are backing off. In the wake of the refusal to board the plane to Brazil, a newspaper editorial accused the four-time African Footballer of the Year and his team mates of “high treason”.

The team also refused to receive a symbolic flag from Prime Minister Philemon Yang at the end of their last warm-up international against Moldova in Yaounde before the World Cup. Coach Finke, a German international, had to accept the flag. It’s something which did not sit well with fans and the public.

“The flag is a symbol of the nation. We can blame those in power (for our problems), but insulting the national anthem or trampling the flag is a sacrilege,” read the piece in the daily Mutations newspaper.

“That is the great sin of the Indomitable Lions, when they rushed as one man into the locker room and refused to receive the flag from the Prime Minister.

“A player who goes to the World Cup is a soldier at the front. If he does not want to board, that is high treason that deserves punishment!”

The team’s campaign has been catastrophic and if there were such a rule as expulsion from the World Cup for bad behaviour, Cameroon should have been booted before they had even arrived. From the refusal to board the plan to Song’s red card and Assou-Ekotto’s head butt, Cameroon’s behaviour has been astronomically disrespectful not just to their country, but also to the beautiful game. DM

Photo: Pierre Webo of Cameroon reacts during the FIFA World Cup 2014 group A preliminary round match between Cameroon and Croatia at the Arena Amazonia in Manaus, Brazil, 18 June 2014.