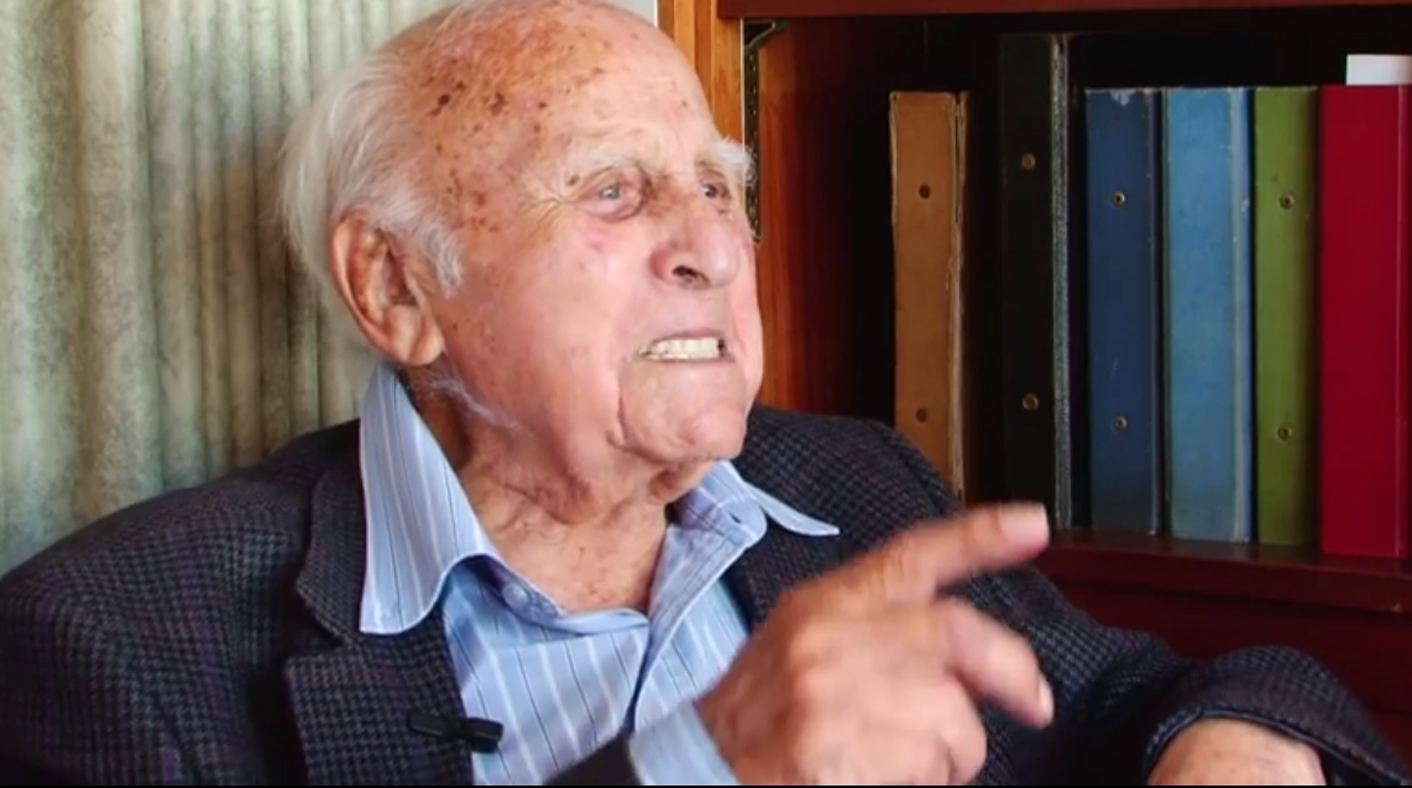 Simmy Lewis is 96 and a South African veteran of World War II. To commemorate the 70th anniversary of D-Day, GROUNDUP spoke to Lewis about the war, his views on race and living with increasing frailty. By NATHAN GEFFEN.

Lewis volunteered to fight in 1940. At the battle of Tobruk on 20 June 1942, he was captured by the German army. He spent the remainder of World War II as a prisoner, first in Italy then Germany. Interestingly, being Jewish didn’t affect his treatment by the German army while he was a POW.

After the war, Lewis worked as a civil engineer for the City of Cape Town for most of his life. He was also one of Western Province’s top chess players. As a youth, he was a competent amateur boxer and in recent decades he has been one of the world’s foremost experts on the sport, helping select candidates for boxing’s Hall of Fame.

He was outspoken against Apartheid. For example, he wrote a letter to the Apartheid government on behalf of the South African Chess Federation in defence of the late anti-Apartheid activist Donald Woods (who was also a chess player). He has also written letters to the media in defence of Palestinian rights.

Below are five short video excerpts from the interview, with lightly edited transcriptions below each video.

“I think I’ve lived an interesting life,” Lewis said during the interview. After watching these videos (or reading the transcripts), you might agree.

On joining the army and being captured

When South Africa got involved [in the war] as a Jewish guy I thought it was my duty to fight Hitler and go and volunteer. An entire group from Cape Town went to volunteer. I joined the anti-aircraft.

On 20 June [1942] the Germans bombed non-stop and Tobruk [in Libya] had been evacuated except for our group of anti-aircraft. I can’t confirm but the belief is we shot down about 17 planes.

We got a message that we had ran out of ammunition. My personal feeling was that now I’d had it. If the planes come again we can’t fire, we’ll all be bombed to hell. And then a message came through that Tobruk had surrendered. I had a sigh of relief, because now I thought I’d see the war through. Then the Germans came through and said, “For you my friends, the war is over.”

An interesting thing [happened while I was a prisoner] which affected my future thoughts. We were all semi-starved; there was hardly any food. The Germans had used mostly black South African prisoners [to work]. And then they moved these guys next to us and they were given food and new uniforms. We were in torn and tattered clothes without food and cigarettes. So our chaps were bumming from the new prisoners, so that’s when I lost my colour bar instincts. The realisation came to me that what happens in life is just chance… there’s no superiority or inferiority between people; there’s just individual characteristics.

Before I was captured we went on leave to Cairo. We were waiting for some transport. There were a number of white guys and a few non-white guys and we just presumed the white guys got preference. When I became a prisoner and I saw how whites were bumming for food, cigarettes and handouts from black prisoners … that completely altered my vision. As an onlooker, I saw that your circumstances change but not your personality. One is equal to another. And that has been my attitude ever since.

On being a Jewish prisoner of war

We had these medallions with your religion because if you were killed they knew where to bury you. Nearly every Jewish guy that I came across had destroyed their Magen David [medallion showing that you’re Jewish], except Cyril Jaffe. Cyril said, “To hell with the bloody Germans. I’m Jewish and if the Magen David shows it, then that’s how it is.” I think it was purely coincidence but he was in the first week of guys sent to the coal mines. But there was no specific anti-Semitism from the German guards. There was a letter from my mother saying that she’d been to Shul and that it was Rosh Hashanah, but nothing came of that.

The [POW] camp we were at was on the Oder River and the Russians were advancing, so they [the Germans] moved us out of the camp and we just marched in circles. I’d estimate for two months we did a minimum of 500 miles. The Americans were coming from this side, the Russians from the other, so they were marching us in circles. At one stage the Germans said that the sick guys could assemble at a station and go by train.

A friend – he afterwards became my best man at my marriage – said he had done enough marching and he was staying there. I said, “Okkie, you’re wrong.” He asked why. I said, “The Americans are coming from this side and the Russians from the other and we’re walking in circles. So sooner or later we’ll get released. But if you go on the train they’ll take you to Siberia and you won’t come out.” But he said he’s not walking, finished and klaar. This happened on 6 February 1945. He was released on the 9th and I on the 12th, so it worked out well.

But the main attitude was you don’t have all the facts so you have to make up your mind for good or bad. So if you think A and your friend says B, and you’re against it but stick to your friend and it goes wrong, you blame yourself. But if it goes right, you think it would have gone [more] right the other way. And if it goes wrong on your own choice, well there’s nobody to blame. So that was my determination: we don’t know the facts and I think this and he thinks that, [so] I stick to what I want to do for good or bad. Fortunately it turned out ok.

On declining health and death

I realise my health is declining and there can’t be very much left. I can’t defy it [death]. Roundabout 1980, 81, I got an illness, Guillain-Barre syndrome. I was paralysed. I [spent] six and a half weeks at Groote Schuur [Hospital]. They gave me medication and therapy. I came out and I could walk ok. But while I was there, I thought to myself, “Well, so that’s that. So I’ll be on crutches for the rest of my life.” I was prepared to face something and if I can’t avoid it I must do the best I can. Well, what helps was that I had a wonderfully happily married life [for] 52 and a half [years]. [Lewis met his fiance before the war and married upon his return.]

I’ve certainly got no belief in the upstairs or downstairs. You see my attitude was this … the rabbis, and probably the priests, tell a person who is having great difficulty in life – poverty and hunger and so on – but he’s honest, he’s kind, he helps people, he prays and he goes to church or Shul, they tell him he’ll get his reward in the world to come. And the guy who’s living on the fat of the land, a bastard of the first order, they says his punishment will be in the world to come. Well that’s two things I don’t accept. The world is here – finished and klaar. DM