Mubarak 2.0: The coronation of yet another Egyptian strongman 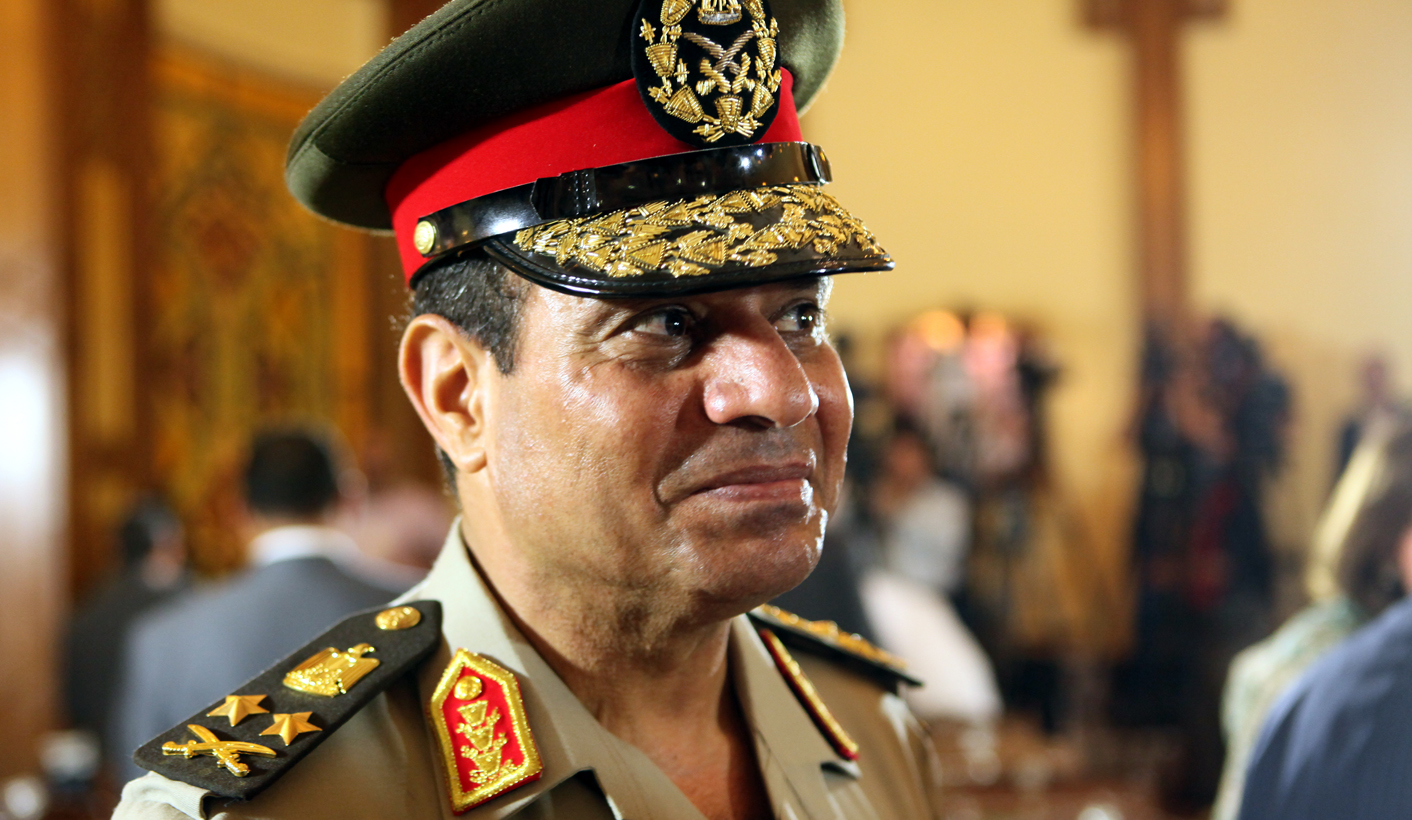 Egyptians began voting for a new president on Monday. They’ll continue to do so on Tuesday, not that the result is in doubt: Barring a miracle, former field marshal Abdel Fatah el-Sisi will be elected with an overwhelming majority. Yes, Sisi’s style is uncannily reminiscent of a certain Hosni Mubarak, but that’s no hindrance – in fact, it might just be the secret of his success. By SIMON ALLISON.

In ancient Egypt, the coronation of a new pharaoh took about a year. It hasn’t taken Abdel Fatah al-Sisi quite as long – it’s been just 11 months since he led the coup which toppled elected President Mohamed Morsi – but the result will be the same: once Monday and Tuesday’s votes are counted, Egypt’s future will, once again, rest in the hands of just one man.

Sisi’s election is a fait accompli, and has been ever since he formally threw his field marshal’s cap into the ring. It helps that there are only two candidates for the position, after some were banned (most significantly the Muslim Brotherhood) and others boycotted; and that the resources of the state are being fully mobilised in support of Sisi. His face graces newspaper front pages, his speeches are televised live, and critics of the martial law he imposed are intimidated into silence.

His one opponent, Hamdeen Sabahi, is a veteran worker’s rights activist who has been arrested 17 times in the last five decades. He’s campaigned hard, but has been nearly invisible compared to the blanket coverage given to Sisi. He claims to be the last defender of the revolution that started in Tahrir Square in 2011, but has been criticised by other activists for participating at all, and thereby bestowing a sheen of democratic credibility on the process. Success for Sabahi will not be a victory, which is considered impossible; but merely to prevent a Sisi landslide and demonstrate to the former army chief that he will not have it all his own way. Even this modest goal seems unlikely.

Sisi is genuinely popular. It has not hindered him in the slightest that his career trajectory, political views and ruling style seem to mirror those of former President Hosni Mubarak, overthrown in that 2011 revolution. In fact, the echoes of Mubarak have struck a chord with many Egyptians fed up with the last three years of chaos. To them, Sisi represents stability, and offers the best chance of getting the country back on its feet.

There’s a bit of truth in this assessment. The Muslim Brotherhood-backed President Morsi never succeeded in getting his administration under control, never mind the state. The army, led by Sisi, has imposed a certain degree of order and predictability. A good example is in northern Sinai, where a heavy-handed military response has curbed a violent insurgency from Islamist groups in the area. Defence Ministry statistics show 85 attacks in February, 80 in March, and just 15 so far in May. (What the Defence Ministry neglects to point out, however, is that the insurgency was inflamed by the army takeover in the first place, and the subsequent crackdown on the Muslim Brotherhood in particular and Islamist groups in general.)

Sisi is also popular because he’s made sure there just aren’t any other serious options. The military regime has locked up more than 16,000 people, including almost the entire top leadership of the Muslim Brotherhood, as well as many secular revolutionaries. Independent media has been shut down or subordinated, or worse – there are four Al Jazeera journalists still in prison on blatantly trumped-up charges, and dozens more who don’t receive as much media attention.

Stifling free speech and opposition may guarantee Sisi’s election, but it won’t solve any of Egypt’s many serious problems. In the new president’s in-tray are a daunting set of challenges, most importantly figuring out how to restart Egypt’s stalled economy. Key to that will be bringing tourists back to Egypt; from being one of the most popular tourist destinations in the world, western governments now warn against travel to Egypt because of the risks associated with the political instability. Sisi must also deal with an impending water and related food crisis, and figure out a compromise with Ethiopia over Ethiopia’s plan to dam the Nile.

When Egyptians took to the streets in their millions in 2011, demanding the end of Hosni Mubarak’s dictatorship, it’s unlike that Abdel Fatah al-Sisi was the kind of man they envisaged to replace him. He is, however, exactly the kind of man that Egyptians are used to. In their thousands of years of recorded history, Egypt has only ever been ruled over by pharaohs, sultans, kings and dictators. Sisi is just the latest in a long line of strongmen – and that might be the secret of his success. DM

Photo: Then Egyptian Minister of Defense Abdel Fatah al-Sisi is seen during a press conference for Egyptian President Mohamed Morsi and the Greek President Karolos Papoulias at the presidential palace, in Cairo, Egypt, 18 October 2012. EPA/KHALED ELFIQI