Drones: Coming to the skies above you, like it or not 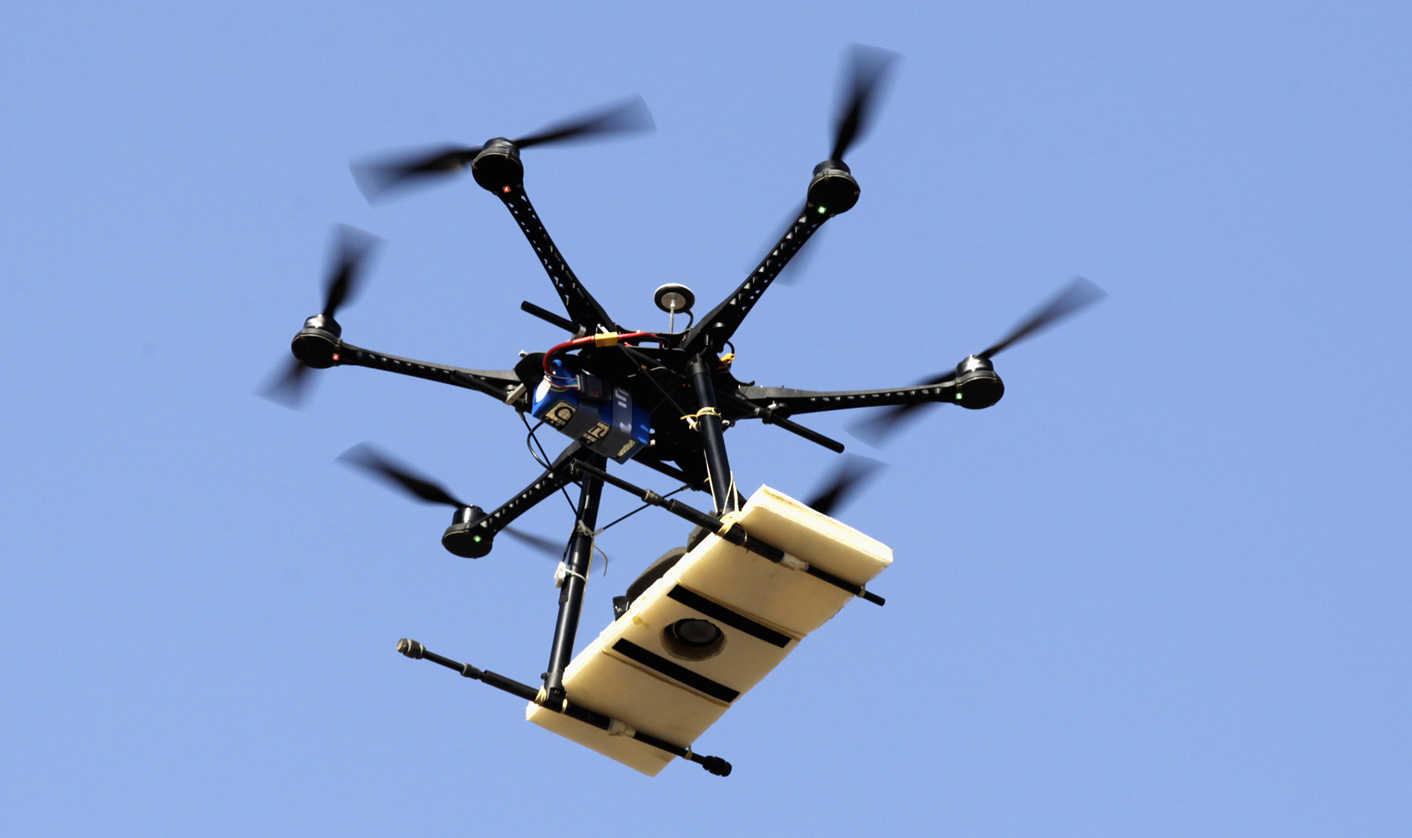 The use of unmanned aerial vehicles (UAVs), more commonly known as drones, has stirred up intensive debate in recent months. Despite valid arguments from both sides, all are in agreement: drones will soon fill our skies. But what are the possible benefits? Hazards? From delivering goods and supplying internet, to a near collision with airliner in Florida in the United States and a possible R50 thousand rand fine, here’s a closer look at these robots that will soon change our lives. By SCOTT FIRSING.

Drones are coming to a sky near you, if they are not over your head already.

Your first physical encounter with a drone is not likely to be with a Northrop Grumman Global Hawk operated by the United States military. The Global Hawk is the size of a huge airliner with a wingspan of 39.9 meters. You probably won’t come face to face with a Reaper/Predator drone shooting hellfire missiles any time soon, and if you do, this will likely be your last encounter with a drone. The first time you lay eyes on a drone will most likely be something like this.

A few months ago, while sitting at my dining room table, I heard a small buzzing noise outside the front of my house. I opened the front door to a black flying object hovering over my driveway with birds flying around it. Was it the CIA spying on me like in the Jason Bourne movies? Was it Phil Dunphey from Modern Family filming the complex for real estate purposes?

I am being a bit too dramatic here. I saw the object in the store a few months earlier and like a seven-year-old kid, I wanted immediately to buy it. It was the Parrot AR Drone 2.0 with built in HD camera. The toy can be bought at Dion Wired and other stores in SA. My 10-year-old neighbour was piloting this particular drone with his iPhone. To my wife, if you are reading this, our five-year-old daughter really needs one, so can we buy it? Yes honey, I know the answer to the question… sorry for asking.

The Global Hawk and the toy are two ends of the spectrum. One, a large killer drone operating in Afghanistan being piloted by an American in America and the other is a fancy gadget whose battery dies after 25 minutes and can’t fly very far. It is the middle ground that is the exciting part.

The last few months have been filled with articles on drones. Most have already read about Amazon’s plans to deliver packages to your door using drones. Others might have heard of Facebook’s plans to buy Titan Aerospace and help bring Internet to rural Africa and Asia. Perhaps you saw the headlines of a near collision with an airliner in the United States or that Iran managed to reverse-engineer the RQ-170 Sentinel drone which was shot down in December 2011 over Iranian airspace. One can get a sense of the positives and negatives of these machines just by reading the headlines, but lets take a closer look.

However, before I go any further, please note that I am simplifying the terminology here because there are distinct differences between UAS, UCAVS and others. However for this article, lets just use the term drones. It’s a great word. Reminds people of Arnold Schwarzenegger and the Terminator. What a classic.

The good, the bad and a lot of work to be done

Drones are not just about killing terrorists. In fact those particular machines are very advanced. The ability to carry that type of payload, the science behind the pure avonics and the basic operating such an aircraft is extremely complex. This is why it will take many years, even decades for some countries to have the know how to be able to fit a missile onto a drone and operate it around the world.

However, most countries have aerospace companies that produce ‘low end’ drones. I earlier mentioned Iran. China successfully flew a stealth drone a few months prior, causing goose bumps in nearby countries and as far away as Washington. South Africa itself has companies that produce drones, mainly parastatal defence firm Denel and my former employer, the privately owned Paramount Group.

Drones are not just about warfare between countries either. China for example has recently developed a smog-clearing drone in its fight against pollution. South Africa has used drones in the battle against rhino poaching. Kenya is doing the same after a successful pilot project in major protected wildlife area that saw drones reduce poaching up to 96%. The Kenyan government plans to deploy drones in all of its 52 national parks and reserves to monitor and stop rhino and elephant poaching.

It is almost an endless array of possibilities. Drones are already playing a large role in weather, agriculture, and border control monitoring. This will increase dramatically in near future. Drones are now even being deployed over Joburg skies to help monitor traffic.

For Africa, perhaps the most exciting possibility for the further advancement of drones is their ability to deliver, literally deliver. Flying robots carrying cargo are known as ‘flying donkeys’ or simply ‘donkeys.’ Those in that particular area do not like the term drones.

Think: you are a business that urgently needs a specific item. Can’t wait for the delivery truck? Drone it in. Can you imagine sick children who desperately need some sort of medicine in an area where delivery is nearly impossible due to poor roads? Here comes a drone, delivering supplies to the local clinic.

Although with the good usually comes some bad, or what is perceived as such.

Firstly, briefly getting back to combat, the thought of robots fighting our wars in Africa can be scary. America and France have a drone base outside the capital of Niger. The US also operates surveillance drones out of Djibouti, Ethiopia and the Seychelles. The United Nations started using drones in the eastern DRC in December bought by an Italian company, and just this week the UN requested drone usage in Mali.

It’s a touchy subject, especially when they are operated by foreign powers on African soil. US personnel have increased beyond the initial 100 troops US president Barack Obama recently said he deployed. There is no transparency in a country like Niger when it comes to the military issues. However, at the same time, most Nigeriens and Africans in general are strongly opposed to al-Qaeda in the Islamic Maghreb (AQIM), Boko Haram, al-Shaabab and others.

These drones have worked and have proven effective. In March, AQIM fighters were spotted in the Amettetai Valley, in the Kidal region in Mali, by French forces operating the US-made Reaper drones. This led to the death of Islamist militia leader Omar Ould Hamah, a commander of the Movement for Oneness and Jihad in West Africa (Mujao) and AQIM.

The US Pentagon announced yesterday that the US is flying drones around Nigeria to help #bringbackourgirls.

Military usage aside, the over-flooding of a country’s airspace is a real concern for governments. This leap in technology and affordability has far outpaced legislation and accidents look set to occur.

A drone nearly collided with an American Airlines Group jet on 22 March as the pilot approached the Tallahassee runway en route from Charlotte, North Carolina. The pilot swears the drone hit the jet, however, there was no sign of damage. The drone was at an altitude of about 700 metres, with the big concern being the aircraft being sucked into the jet’s engine.

The Federal Aviation Authority or FAA is in charge of managing America’s skies and drones are making this a difficult task. The FAA investigated this particular incident, but was unable to identify the pilot or the drone’s operator.

US Congress and President Barack Obama are on the FAA’s back to reduce drone restrictions by next year, which could open up American airspace to 30,000 drones by 2030. How to do that and keep everyone safe is a real challenge, especially as drones do still crash quite often.

Some towns in the US were not waiting for the FAA and suggested taking the law into their own hands. Deer Trail, Colorado, with its population of 561, has become famous for its proposal to issues hunting licences for shooting down drones. In the end, they finally voted against it.

Back home in SA, the South African Civil Aviation Authority (SACAA) released a statement in April after a growing number of drones took to the sky. The SACAA has not given any concession or approval to any organisation, individual, institution or government entity to operate drones within South African civil aviation airspace. Therefore those flying any type of drone, big or small, plane or helicopter, pink or purple, are doing so illegally and face fines of up to R50,000, a prison sentence of up to 10 years or both. Ouch!

The bottom line is laws related to civilian drone use do not yet exist in African countries, and most countries around the world for that matter. The key word there is ‘yet’.

The SACAA is working with the Commercial Unmanned Aircraft Association of Southern Africa, other regulators worldwide and the International Civil Aviation Organisation (ICAO) to develop policies, procedures, regulations and standards to ensure drone operations are done in a “safe, harmonised and seamless manner comparable to that of manned operations,” to steal the SACAA’s wording.

With that said, there are a lot of question marks around the use and future use of drones in Africa and in the world. I myself am fascinated by the possible benefits of such vehicles and will be attending an intensive course on the topic next month in the US. Expect more articles on drones from me whether you like or not. If it is the latter, look out of your window. DM

Photo: A drone flies over the archaeological site of Cerro Chepen as it takes pictures in Trujillo August 3, 2013. REUTERS/Mariana Bazo