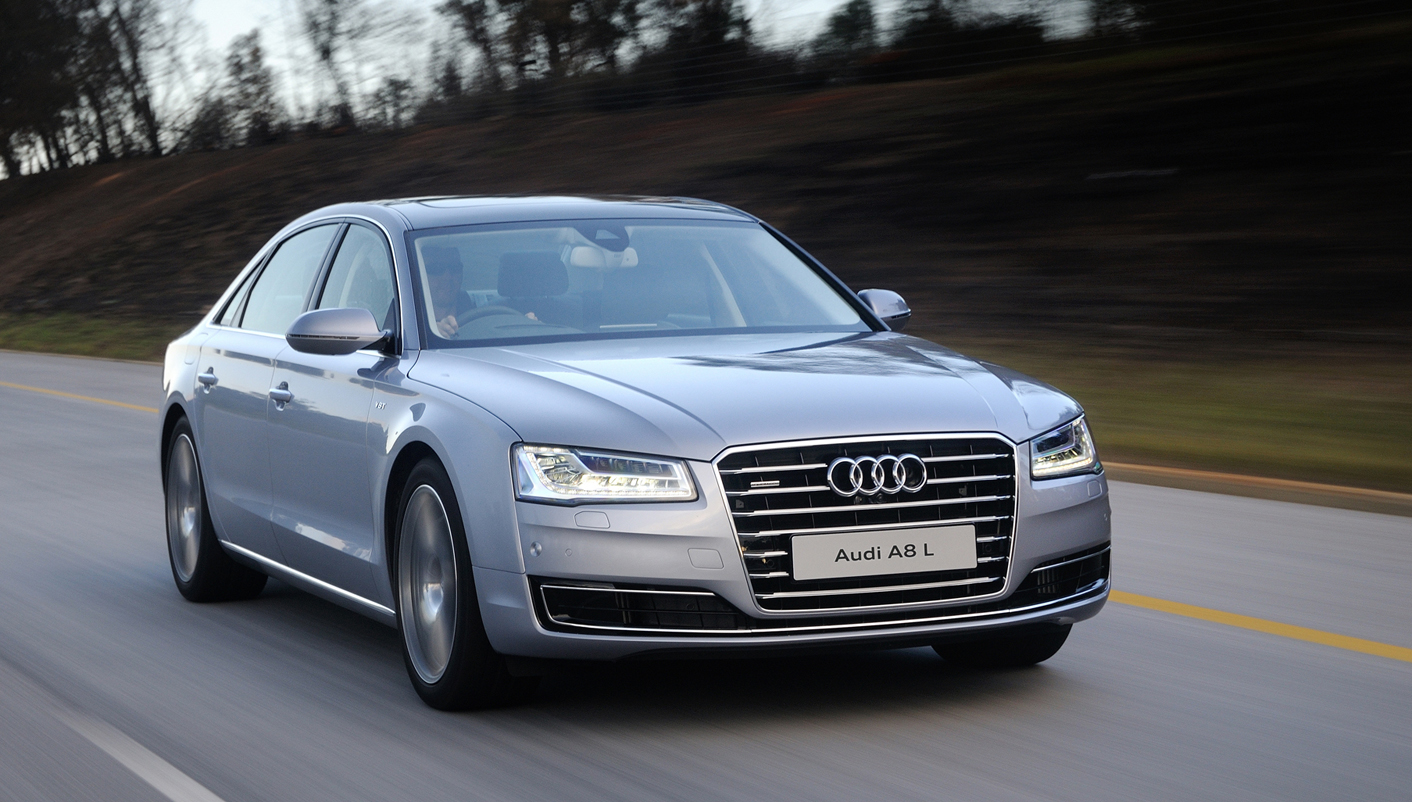 The top-end luxury car segment isn’t the most important from a volume perspective. But given the R1-million-plus price tags these limousines command, even modest sales tallies represent an attractive proposition for the brands that offer them. Which explains why Audi has just updated its flagship A8 range. DEON SCHOEMAN drives the high-tech behemoth in Cape Town.

There are some compelling reasons why a significant number of Audi A8 buyers will rarely, if ever, get behind the wheel of their imposing steeds.

For starters, there’s the space. Sitting in the back of the A8, and particularly the extended-length A8 L, is like being ensconced in the first class cabin of an airliner: stretch-out legroom, super-comfortable armchairs, high-resolution colour screens, and engaging surround sound.

No, there isn’t space for the pretty airhostess and the drinks trolley. But you do get to savour a hand-crafted interior, with a level of execution that is indisputably upper end, and that can even be customised to suit personal taste and preference.

Progress might not be as swift as a Lear Jet at 42,000ft, but the Audi A8’s ability to cover ground with unruffled ease, almost regardless of conditions, becomes clear as soon as you hit the open road. And, of course, there’s a huge luggage compartment with the ability to swallow a small mountain of luggage.

The A8 even offers on-the-move connectivity, creating a Wi-Fi hotspot for Internet and e-mail access, and dovetailing with Google Earth to provide actual satellite imagery and street-level views, rather than the mundane graphics of lesser systems. Of course, hands-free telephony is also included, either via dedicated phone in the centre console, or via Bluetooth.

Thus, while Jeeves the chauffeur pilots the car, the owner gets to appreciate the finer things in motoring life from the rear seat, making the most of what would have been unproductive time behind the wheel.

Audi South Africa reckons there are enough potential customers of cars like its A8 to sell 150 examples this year alone – at prices ranging from R1.1-million to R1.54-million. And that’s before you adds some tempting extras.

Okay, so let’s engage reverse gear for the moment, and start at the beginning. The Audi A8’s natural rivals are the BMW 7-Series, and the Mercedes-Benz S-class. The battle between these three protagonists has been raging for decades now – and at present, one could argue that the latest-generation Mercedes, launched late last year, has the upper hand in sheer technology terms.

And indeed, it’s loaded with everything that’s considered cutting edge in automotive terms, including pre-emptive, sensor-driven suspension, intelligent lighting, night vision assistance and a raft of safety features and systems.

The 2014 A8 is Audi’s response to that tech-fest. And while the updates appear minor, their combined impact is greater than the sum of its parts.

In styling terms, the package hasn’t changed much: A8 connoisseurs may notice a more keenly styled bonnet, and updated single-frame grille, a slightly different headlight shape, and a new front bumper.

The headlights deserve closer scrutiny. Bi-xenons are fitted as standard, with full, super-bright LED units an optional extra. But for those with an appetite for cutting edge tech, and no budget constraints, the all-new Matrix LED headlights are a must-have.

The system uses 25 separate elements, each of which can be individually controlled to provide optimum lighting for any given conditions, especially as far as approaching traffic is concerned, or when cornering.

The rear tail light clusters have been reshaped, while the new bumper hosts new, rectangular exhaust tailpipes. But really, all of this amounts to little more than visual fine-tuning, and the A8 silhouette remains unchanged.

The shape is unashamedly imposing, but the A8’s bold, muscular presence is tempered by a sleek sophistication that manages to mask the sedan‘s outright bulk, especially from a distance. Of course, with an extra 130mm, the L version borders on the ostentatious.

The full benefit of that extra length is applied to the rear footwell, creating a truly hedonistic space for rear occupants. Perfect than for those owners who want to be driven, rather than drive themselves.

The cabin is an exercise in smart, but feel-good design. A sense of bespoke craftsmanship permeates the interior, thanks to the hand-stitched leather, the contrast between gloss lacquer and matt real-wood finishes, and the precise, almost surgical operation of the switchgear.

As one would expect, the standard features list is extensive. From keyless entry and a motorised boot to four-zone climate control, a multi-speaker audio system, integrated navigation, WLAN hotspot connectivity and Audi’s established MMI interface, A8 occupants want for nothing.

Even so, it’s the small touches that leave the most lasting impressions: the doors that gently pull themselves completely closed, the way the bootlid can be remotely opened, the seamless shutlines, and the heirloom-like solidity of the car. It feels, well, special.

From an engineering perspective, the key updates of the 2014 model revolve around the engines, and the TDI turbodiesels in particular. Both the 3.0 V6 TDI and the 4.2 V8 TDI boast more power than previously, while efficiency and emissions have been improved, too.

That’s also vindicated by the performance data: 4,7 seconds for the 0-100km/h dash, and top speed limited to 250km/h. And yet, claimed combined fuel consumption is as low as 7.4 litres/100km. However, take those claims with a pinch of salt – 11 to 12 litres/100km is a more realistic expectation.

But here’s the thing: as much as the A8 4.2 L is a big, two-ton monster that demands circumspection and concentration in parking lots and driveways, it can wind its way through the twisty stuff with the agility of a car half its size and weight.

That big V8 TDI suffers from a little bit of low-down hesitation, but once it overcomes the inertia, there’s just no let-up. Acceleration is relentless, and the gear swaps come thick and fast. Shift paddles are better for real driving enjoyment – and frankly, this is a car for the driver to savour.

In Du Toitskloof Pass, the A8 impressed with its ability to soak up poor road conditions, despite those big 20-inch wheels and low-profile rubber. It tucked into corners nicely, and the steering felt positive and engaging, even when having to deal with all that inertia under braking.

The R43 linking Worcester to Villiersdorp and, ultimately, Grabouw, is one of those wide-open, undulating routes that is as challenging as it is revealing. The A8 was in its element here, covering ground almost voraciously, yet making it feel so easy.

The A8 comes with Audi’s Drive Select system, which allows manual adjustment of dampers, throttle mapping and steering. But it’s best left in auto mode, which adjusts everything quickly and precisely, leaving the driver to concentrate on the important stuff – like keeping the A8 on the road.

The updated A8 L 4.2 V8 is a real executive express; a low-flying monster that needs to be treated with respect. In fact, the same goes for the 3.0 TDI version, regardless of wheelbase. But for once, Jeeves may be in trouble. You see, the latest A8 is so engaging, that even committed back-seaters may well want to experience those talents for themselves. DM