In the thick of Ugandan hate rally 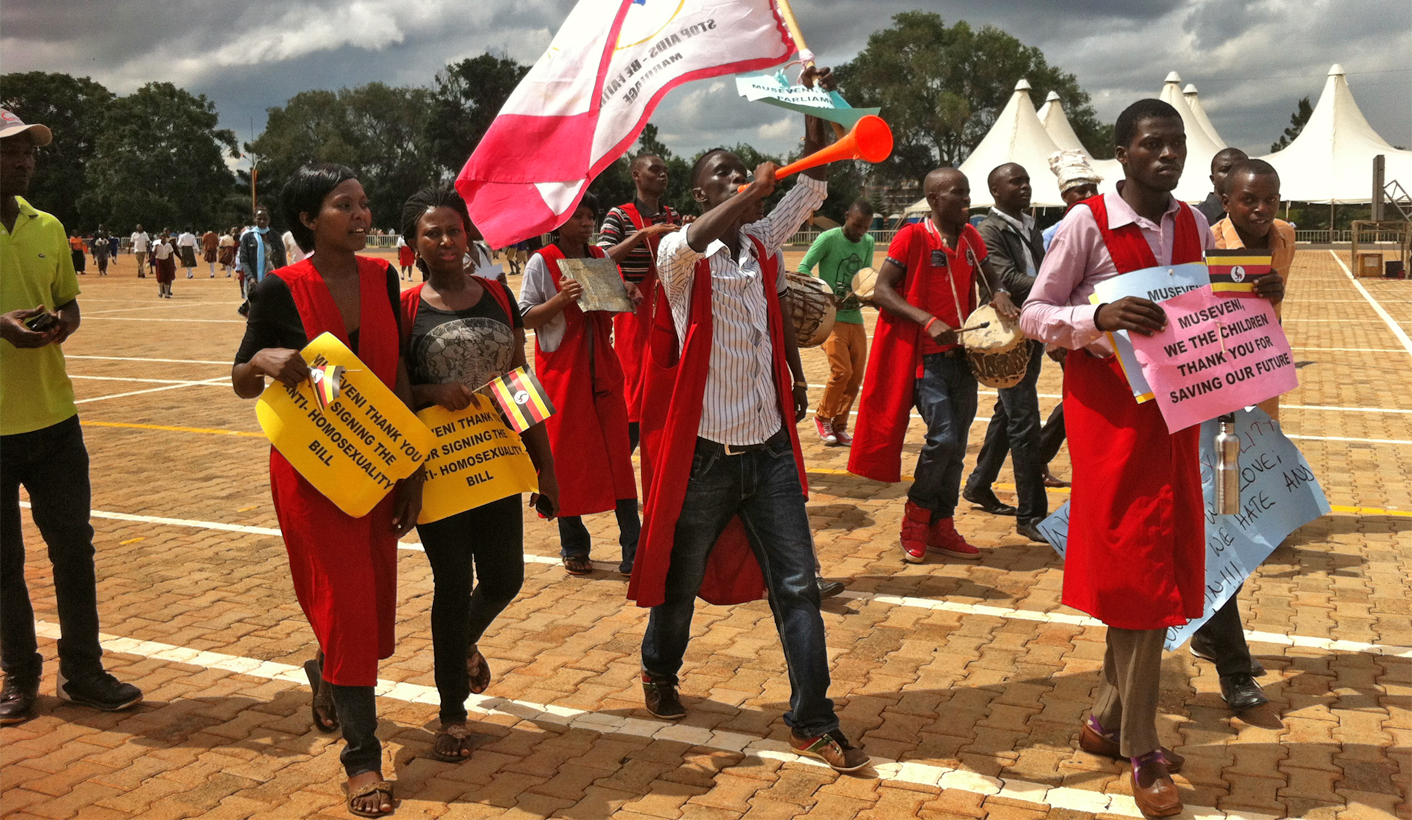 At a stadium in Kampala, 30,000 Ugandans gathered to give thanks to President Yoweri Museveni for passing the Anti-Homosexuality Act. The event combined the fanfare of a mass political meeting and a cultural festival. By REBECCA HODES.

“There is a fundamental misunderstanding between us and the liberal west. They say that homosexuality is sex. But it is not sex.” These were President Yoweri Museveni’s introductory remarks at the national rally in support of the Anti-Homosexuality Act, organised by the Interreligious Council of Uganda, and held at Kololo stadium on 31 March.

Museveni continued: “There are other words (in Luganda) for sex. I won’t tell you those words.” The crowd laughed, enjoying the coy omission. “But if you take homosexuality, they (the Ugandan people) don’t call it ‘sex’. They call it ekifire.” A neighbour wearing a Ugandan flag on her head translated: “It means they are half-dead, yet they are still living.”

Museveni spoke at the service without notes, ad-libbing with a jocularity that resonated with the mood of the crowd. Many of the audience members had travelled from the districts, and had already endured long hours of speeches. Over the course of the morning, the crowd poured in by the thousands, filling Kololo stadium to capacity. Museveni was the highlight of the speaker’s bill, and was kept until almost the very last. The audience cheered wildly as he strode to the podium, but silence descended once his speech began.

On the surface of it, Museveni’s opening gamut was pure demagoguery – a jab at the West and an absurd reproach against gay zombies. But, in the context of the day’s events, and Museveni’s own skilful politicking around the anti-Homosexuality Act, his remarks revealed much about how homosexuality has been politically loaded in Uganda, presented as a proxy for all the geopolitical and moral evils besetting the nation, derailing economic and spiritual advancement, and darkening the future.

Many of the speakers condemned the threats made by European donors, that aid would be withdrawn should the Anti-Homosexuality Bill be legislated. A leader from the Interreligious Council stated that the European Union should “respect the sovereign rights of other nations and desist from tying homosexuality to development aid,” to deafening applause. He thanked Museveni for “reminding President Obama that Uganda is a sovereign country.” A previous speaker had cribbed Obama in assuring the crowd that “Yes, we can rid Uganda of homosexuals. Yes, we can!” after announcing: “They can stop their dollars, but they have no authority to come here and spread homosexuality.”

Museveni himself shrugged off threats of aid withdrawal with a somewhat petulant avowal: “We don’t need aid… because a country like Uganda is one of the richest on earth.” This must have rung false for audience members, who travel daily along Kampala’s dirt roads, and many of whom live without access to basic amenities. Mulago, the nation’s flagship public hospital, saw a recent outbreak of diarrheal disease in its paediatric ward after water supplies had been cut due to the hospital’s failure to pay its bills. Political pundits blamed the incident on international donors.

The spectre of the homosexual lobby loomed large in numerous speeches, and featured in a booklet on sale by the ushers. Written by George Oduch, a Senior Pastor of the Victory Church of Christian Ministries International, the text was peppered with quotes from the “Gay manifesto,” testament to “the kind of aggressiveness that was in Sodom and Gomorrah… the same with which the homosexual community is promoting this evil cause.”

Those implicated in the gay lobby constituted a weird medley. They included Morgan Tsvangirai, UN official Arie Hoekman, Albie Sachs (alleged to be masterminding the homosexual infiltration of the Kenyan judiciary), and an unnamed Swedish “homosexual doctor” who was claimed to abuse his patients as a prelude to performing their sex change operations.

The ostensible health effects of homosexuality were another key focus of both speeches and educational materials, and the spread of disease a productive refrain. “Homosexuality = AIDS = 100%,” declared one placard, while Museveni instructed the audience that: “The mouth is for eating, it is not for gonorrhoea.” George Oduch’s booklet provided a list of homosexual acts which, it its scatological preoccupations, bore a closer resemblance to the writings of the Marquis de Sade than a Christian treatise. Oduch’s various descriptions, and their accompanying pictures, exceeded the bounds of mere prurience. They were explicitly pornographic, of the gonzo not vanilla variety, and audience members (particularly school children) spent much of the day pouring over them with fascination.

For a nation that styles itself as beset by sexual secrecy, mired in taboos that preclude public discussions about intimate physical acts, these explicit descriptions and images were surprising, but only fleetingly. As soon as these acts were described, they were consigned to the realm of perversity, cast as the practices of “criminals”, “animals” and “devils”. More surprising by far was the atmosphere of celebration and joyfulness – just plain fun – that pervaded the proceedings.

Interspersed with the condemnations of homosexual deviance were jivey musical interludes, dance performance and songs by school choirs. A young woman with a voice like a lark had the audience singing and swaying in unison (the lyrics of the song chorus: “Say ‘no’ to sodomy. No! No! No! No! No!”). The day’s surreal highlight was an act by an acrobatics troupe, which did flik-flaks down the red carpet towards the VIPs, causing a momentary fracas among the president’s security detail.

A range of snacks were on offer throughout the proceedings – sweets, biscuits, and popcorn in paper cones. On the grassy areas of the stadium grounds, braais were lit. The venue was emblazoned with Ugandan flags, paper copies of which were handed out for free at the entrance, while a roaring trade in Yoweriana (keyrings and laminated A4 pages with images of Museveni) was conducted.

The presence of so many children concentrated the jovial nature of the service. They ate messily, slept, and listened to other things on their earphones. They rolled up their placards, bearing slogans of homophobic hatred, and attacked each other with them good-naturedly. When the acrobatics troupe botched an attempt at a complicated human pyramid, they laughed themselves hoarse.

But children featured solemnly in many of the speeches. Speaker after speaker entreated the younger generation to continue the moral crusade that they had begun, to shape the future of Uganda according to local values. The Anti-Homosexuality Act was presented as a beacon of national pride, to be passed on from the current generation of leaders to the next. As one cleric explained, the Act had turned Uganda “from being a beggar to being a nation that gives away to other nations. People will come to Uganda to receive your help.”

As Museveni reminded the audience, Kololo stadium – the site of the day’s festivities – was also the site of the nation’s genesis. It was at the stadium, on 9 October 1962, that the Union Jack was lowered, independence inaugurated, and the national anthem sung for the first time. As I left the grounds, I passed a sculpture that commemorates this day, built in 2012 to mark fifty years of Ugandan independence.

Photo: “The Journey” at Kololo stadium, sculpted by Gregory Magoba

The sculpture was surrounded by school kids, animated by its scale, novelty and emotive force. The sculpture features five Ugandans, a young family perhaps, each figure representing a decade of freedom. They are led by a man, wielding a flag, and followed by a woman and three children. The figures are placed at an angle, so that they seemed to be ascending – propelled forwards as a nation united, into an idealised future. DM

Main Photo: Students of Makerere University make their way towards the stands at Kololo stadium