One year later, Hugo Chavez is remembered with pomp and...

One year later, Hugo Chavez is remembered with pomp and protests 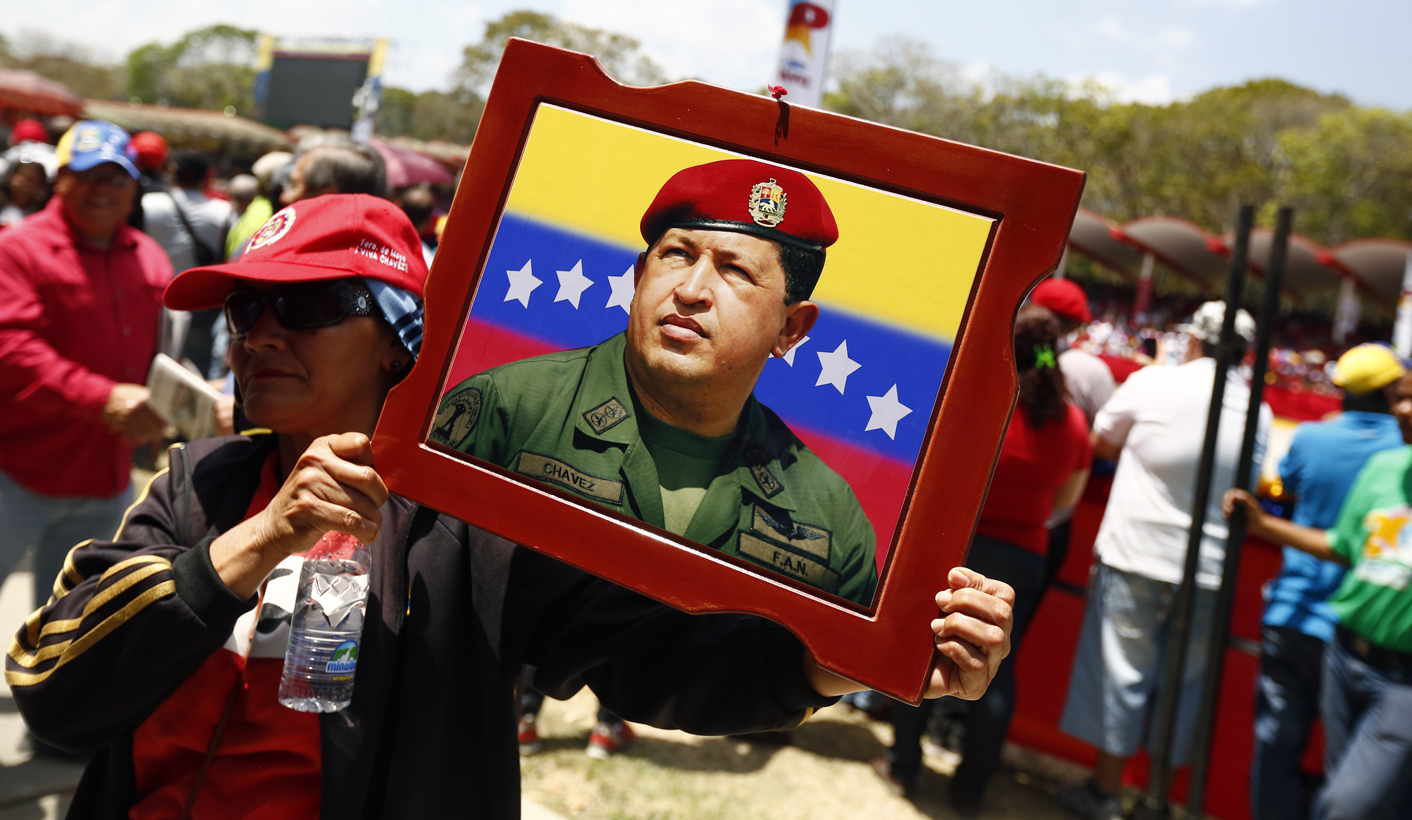 Followers of late socialist leader Hugo Chavez flooded the streets of Venezuela on Wednesday for the anniversary of his death, an emotional but welcome distraction for his successor from violent protests raging for the last month. By Andrew Cawthorne and Girish Gupta.

A year after Chavez succumbed to cancer, his self-proclaimed “son,” President Nicolas Maduro, faces the biggest challenge to his rule from an explosion of anti-government demonstrations that have led to 18 deaths since February.

Though the protests do not appear likely to topple Maduro, neither do they seem to be going away. A hard core of students are determined to maintain street barricades and militant opposition leaders organize daily rallies around Venezuela.

Wednesday’s military parade and other events to honor “El Comandante” gave Maduro, 51, an opportunity to reclaim the streets and show that he too can mobilize his supporters.

“This anniversary is enormously sad. There’s not a single day I don’t remember Hugo,” Chavez’s cousin, Guillermo Frias, 60, said from Los Rastrojos village in rural Barinas state, where the pair used to play baseball as kids.

“He changed Venezuela forever, and we cannot go back. Maduro also is a poor man, like us. He’s handling things fine. Perhaps he just needs a stronger hand,” he told Reuters.

Tens of thousands of red-clad “Chavistas” gathered for rallies in Caracas and elsewhere in honor of Chavez, whose 14-year rule won him the adoration of many of Venezuela’s poorest, while alienating the middle and upper classes.

Cannon-shots marked the precise time of his death, 4:25 p.m.

Maduro used the occasion to announce the breaking of diplomatic and commercial ties with Panama, whose conservative government he accused of joining the United States in “open conspiracy” against him.

“We’re not going to let anyone get away with interfering with our fatherland, you despicable lackey, president of Panama,” Maduro said in fiery language reminiscent of Chavez.

Throughout the day, demonstrators used trash and old furniture to try to spoil the commemorations by blocking streets in Caracas and other cities nationwide from before dawn.

Police fired teargas at stone-throwing demonstrators in one upscale district of the capital. In western San Cristobal city, opponents hung puppets of Maduro from traffic lights and blocked a border crossing with Colombia.

Maduro presided over a parade in the capital before leading crowds up to the hilltop military museum where Chavez led a 1992 coup attempt that launched his political career. His remains have been laid to rest in a marble sarcophagus there.

“Hugo Chavez passed into history as the redeemer of the poor,” the president said, comparing his mentor to both Jesus and South American independence hero Simon Bolivar.

Chavez’s humble roots, anti-U.S. rhetoric, network of grassroots political organizations and lavish spending on slum projects made him a hero for many. Yet his tough line against opponents, sweeping nationalizations and rigid economics such as price and currency controls angered many others.

One year after his death, though, debate in Venezuela is no longer about Chavez but his would-be heir.

Maduro, a former bus driver and union activist, lacks Chavez’s charisma and grip on the ruling Socialist Party, and he has been unable to fix Venezuela’s many problems, ranging from soaring prices to deteriorating services and runaway crime.

Yet “Chavistas” largely remain loyal to their hero’s dying wish that they support Maduro. So far, the protests have not spread far from a middle-class core and the military seems loyal, making a Ukraine-style change of government improbable.

Oil shipments from South America’s biggest exporter have not been affected, though the unrest has hit small businesses.

A long six-day national holiday for Carnival and now the anniversary of Chavez’s death have taken some wind out of the protests, but a rump of demonstrators stay out daily.

“Various presidents are here and we want to show them that Venezuela is sick,” said Silvana Lezama, a 20-year-old student, standing in front of a Venezuelan flag as she stood guard at a barricade in the upscale El Cafetal district of Caracas.

“We’re not insulting Chavez, but when he died last year there was a week of mourning. Now we have 18 people dead from protests and they declared five days of Carnival holiday.”

Firebrand opposition legislator Maria Corina Machado led a march in the western city of San Cristobal where protests began and which has seen the worst of the unrest.

“We demand the immediate exit of Mr. Castro and the Cubans in our armed forces,” Machado said, reviving a common opposition complaint of Cuban meddling in Venezuela’s affairs.

The numbers of demonstrators seldom go beyond a few thousand, however. That is a far cry from the vast street protests against Chavez that led to a brief military coup against him in 2002.

State media have rolled out round-the-clock hagiographical coverage of the late president. Some Chavez loyalists seem barely able to use the word “death,” preferring euphemisms such as his “physical disappearance” or “sowing in the sky.”

Government supporters interviewed by Reuters were disdainful of the demonstrators but also frank in criticism of Maduro for failing to right the economy or forge his own path.

“Maduro’s had it tough. He has to find his own path, his own ideas, his own speech. He’s not Chavez. The commander is gone; we can’t mourn him permanently. There’s so much work to do, errors to correct,” said Marisol Aponte, a diehard “Chavista” and community activist from a poor zone of west Caracas.

She urged Maduro to purge his cabinet and modernize Chavez-era social programs.

Some of Chavez’s highest-profile friends, including the leaders of Bolivia, Suriname, Nicaragua and Guyana, were in Caracas. “It’s our duty to defend elected presidents … We do not accept coup attempts,” Bolivia’s President Evo Morales said, standing next to Maduro at the presidential palace. DM

Photo: A woman carries a portrait of Venezuela’s late president Hugo Chavez during a military parade to commemorate the first anniversary of his death in Caracas March 5, 2014. Followers of Venezuela’s late socialist leader Hugo Chavez flooded the streets on Wednesday to mark the anniversary of his death, a sad but welcome distraction for his successor who has faced a month of violent protests. A year after Chavez succumbed to cancer, his self-proclaimed ‘son,’ President Nicolas Maduro, faces the biggest challenge to his rule from a month-long explosion of anti-government demonstrations that have led to 18 deaths. REUTERS/Jorge Silva