The world responds to Uganda’s anti-gay law. Africa, not so much. 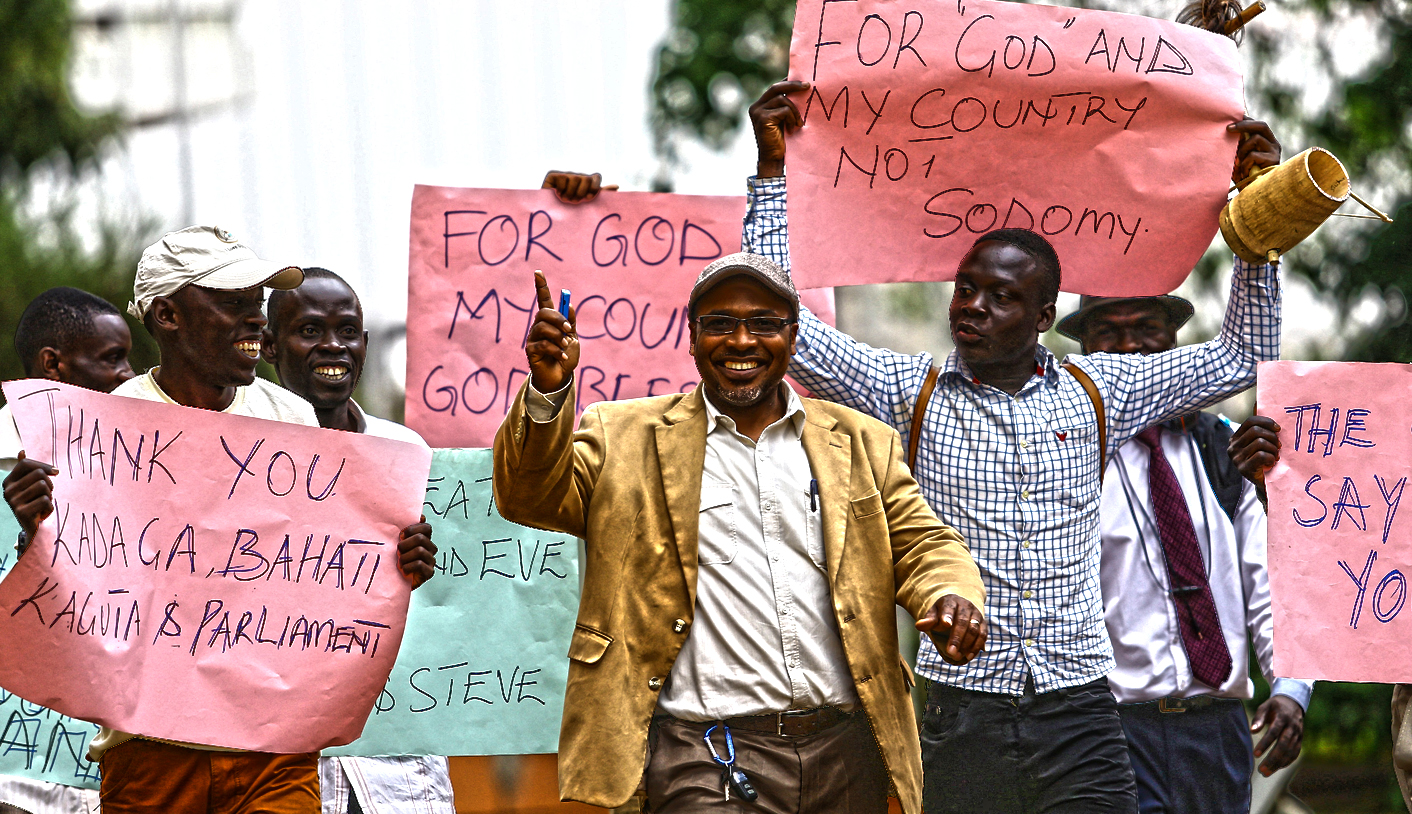 With a stroke of a pen, President Yoweri Museveni made it even more illegal to be gay in Uganda. And don’t even think about “promoting homosexuality”, whatever that might mean. Condemnation of the harsh new measures from western leaders has been swift and categorical. From African leaders, on the other hand, there’s been an ominous silence. By SIMON ALLISON.

On Monday, Ugandan President Yoweri Museveni struck a blow for “African morality” against the “social imperialism” promoted by the West. After months of wrangling, and in defiance of intense international pressure, Museveni finally signed the notorious anti-gay bill into law – a decision which he maintains will rid his country of “un-African” homosexual behaviour.

He’s got science on his side. Well, Ugandan science. According to a report specially commissioned by the president, homosexuality is not genetic. Therefore, it is a choice – a choice that can be un-chosen, apparently. “We reject the notion that somebody can be homosexual by choice; that a man can choose to love a fellow man; that sexual orientation is a matter of choice,” Museveni said. “They should rehabilitate themselves and society should assist them to do so.”

This, then, is Museveni’s plan to rehabilitate Uganda’s homosexuals: laws that make it a crime, punishable with a life prison sentence, to be gay or lesbian; laws that make it a crime to promote homosexuality in any form, presumably targeting gay rights and equality activists; laws that create a whole new category of crime called “aggravated homosexuality”, which encompasses having sex with a minor or while HIV-positive (by implication, we can conclude that heterosexuals in Museveni’s world don’t do these things).

The rest of the world is not so enthusiastic about Ugandan science, or Museveni’s solution to the “abnormality” of homosexuality. Even before the president had signed the bill, his US counterpart Barack Obama had made his feelings on the issue quite clear, describing it as “a step backward for all Ugandans”. Jay Carney, Obama’s press secretary, was even blunter on Monday: “Instead of standing on the side of freedom, justice, and equal rights for its people, today, regrettably, Ugandan President Museveni took Uganda a step backward by signing into law legislation criminalising homosexuality.” Carney went on to describe the law as “abhorrent”.

These words were echoed by Britain’s foreign secretary William Hague, who questioned whether the new laws were compatible with Uganda’s constitution. “There can be no doubt that this Bill will increase persecution and discrimination of Ugandans, as well as damage Uganda’s reputation internationally,” he said.

International human rights organisations were similarly outraged. “This legislation will institutionalise hatred and discrimination against lesbian, gay, bisexual, transgender and intersex people in Uganda. Its passage into law signals a very grave episode in the nation’s history,” said Michelle Kagari of Amnesty International.

­Although Uganda’s government has already brushed off the criticism, and Museveni complained again about how the West seeks to enforce its philosophy on others, the international response is not without teeth. Already, in reaction to the anti-gay law, the Netherlands has frozen over $9 million in aid to the Ugandan judiciary, while Denmark and Norway announced they will each redirect $8.5 million in budget support away from the Ugandan government (sending it to NGOs instead).

Curiously, closer to home, Uganda’s neighbours have not joined in the chorus of condemnation. Or perhaps not so curious: there are few countries in Africa that are openly accepting of homosexuality, and even fewer that confer any kind of legal protection. It is an exceptionally difficult continent on which to be gay.

One exception to this rule is South Africa, where freedom of sexual orientation is enshrined in the constitution and same-sex couples enjoy similar rights to heterosexual couples. Yet even South Africa has remained silent. On Tuesday, home affairs minister Naledi Pandor batted away questions from journalists on the issue. “Countries pass many bills and we don’t really comment on them, so I don’t know why you need a special comment by the government on this,” she said.

More insight into the South African government position was offered by John Jeffrey, deputy minister of justice and constitutional development. At a civil society workshop on LGBTI rights, he explained that South Africa was concerned by the Ugandan law, but that a public attacks is not necessarily the best way to handle the situation. “Our government has been criticised by some because they believe that government hasn’t taken a strong enough position on the anti-gay laws of other African countries. But let me assure you that South Africa is involved, and very actively involved, in trying to mediate or bring about a better understanding of the importance of the protection of gay rights. Our track record at the UN proves this. But it’s also about the way we approach diplomacy. We don’t practice what I like to call ‘megaphone diplomacy’, in other words, standing on the rooftops and shouting ‘we condemn, we condemn’ with a load-hailer, because we know that that approach achieves very little. We believe it is better to try to play a more mediating role.”

Jeffrey is outlining yet another example of South Africa’s infamous ‘quiet diplomacy’ in action. It’s hard to shake the suspicion, however, that it’s too late for quiet words and mediation – at least in Uganda. If South Africa was going to make any difference, it would have already. But now the bill has become law, and Uganda’s homosexual community is in genuine danger. By refusing to provide a public, dissenting voices from Africa, South Africa risks tacitly condoning Museveni’s belief in an “African morality” that excludes homosexuality.

Besides, South Africa’s ambassador to Uganda is a certain Jon “call me names but gay is not okay” Qwelane, who was found guilty of hate speech by the Equality Court for a nasty tabloid column in which he described homosexuality as “against the natural order of things” and encouraged politicians to change the constitution to make gay marriage illegal. If he’s the conduit of South Africa’s quiet diplomacy, then it’s more likely that South Africa has been encouraging Museveni.

Fortunately, there is another counter-narrative out there, not least from Africa’s gay community itself. “It is sad that they disapprove of me and consider me to be evil, unnatural and un-African because of my kind of love. What should it matter to anyone who I love?” asks Dr Paul Semugoma, a Ugandan gay rights activist (who recently avoided deportation from South Africa due to fears for his safety at home). “It’s simply politics of destruction. We [homosexuals] are convenient scapegoats to be used when they need to boost their political power.” DM

Photo: Ugandan anti-gay activist Pastor Martin Ssempa (C) leads anti-gay supporters as they celebrate after Uganda’s President Yoweri Museveni signed a law imposing harsh penalties for homosexuality in Kampala February 24, 2014. Museveni signed the law on Monday, defying protests from rights groups, criticism from Western donors and a U.S. warning that it will complicate relations. The new bill strengthened existing punishments for anyone caught having gay sex, imposing jail terms of up to life for “aggravated homosexuality” – including sex with a minor or while HIV positive. It criminalised lesbianism for the first time and made it a crime to help individuals engage in homosexual acts. Gay rights activists in Uganda said they planned a legal challenge. REUTERS/Edward Echwalu