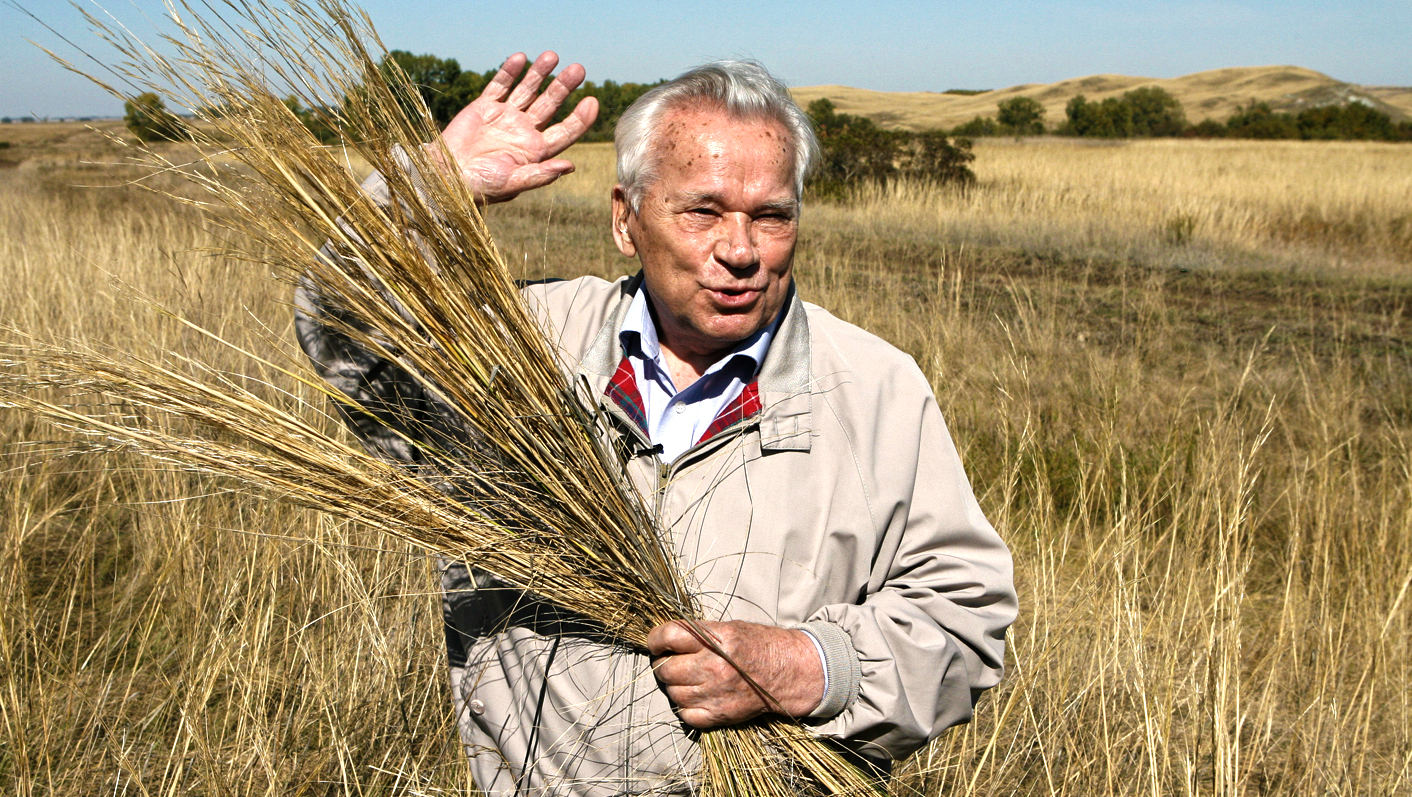 Mikhail Kalashnikov, the designer of the assault rifle that has killed more people than any other firearm in the world, died on Monday aged 94, Russian officials said.

Mikhail Kalashnikov, the Russian designer of the AK-47 assault rifle which has killed more people than any other firearm in the world, died on Monday aged 94, officials said.

Kalashnikov, who was in his 20s when he created the AK-47, died in his home city of Izhevsk near the Ural Mountains, where his gun is still made, a spokesman for the Udmurtia province’s president said on state television.

No cause of death was given. Kalashnikov was fitted with a pacemaker at a Moscow hospital in June and had been in hospital in Izhevsk since Nov. 17, state media reported.

A son of Siberian peasants who never finished school, Kalashnikov invented one of the Soviet Union’s best-known and most imitated products.

Shortly after fighting in World War Two, he created the AK-47, whose number stands for the year 1947. The “A” is for “avtomat” – automatic rifle – and the “K” for Kalashnikov.

Later versions of the AK-47 are still a mainstay of Russia’s armed forces and police more than 60 years after the original rifle went into service in the military in 1949.

At a Kremlin ceremony on Kalashnikov’s 90th birthday, then-President Dmitry Medvedev bestowed upon him the highest state honour – the Hero of Russia gold star medal – and lauded him for creating “the national brand every Russian is proud of”.

But Kalashnikov said pride in his invention was mixed with the pain of seeing it used by criminals and child soldiers.

As well as being embraced by armies, anti-Western revolutionary movements and leftist leaders around the world, the relatively cheap and simple rifle has been used by gangsters, drug traffickers, militants and rebels of all stripes.

Thirty years later, invading U.S. troops found a gold-plated Kalashnikov reportedly given to Saddam Hussein’s son Uday at one of the Iraqi leader’s palaces in Baghdad.

Osama bin Laden, the al Qaeda leader killed in 2011, posed with a Kalashnikov in videotaped diatribes against the West.

Bearded Taliban fighters in Afghanistan and Liberia’s gangs of young thugs wearing flip-flops, Somali hijackers and South American guerrillas – all seem to admire the rifle that enthusiasts say continues to work in dust, sand and swampland.

“It is painful for me to see when criminal elements of all kinds fire from my weapon,” Kalashnikov said in a videotaped address to a Russian arms conference in 2009. “I created this weapon primarily to defend the borders of our fatherland.”

At first, the upstart Kalashnikov received a cool reception.

Renowned Soviet arms designers scoffed at the first, primitive gun the young sergeant crafted in 1942 while being treated in hospital in Kazakhstan after he was pulled, severely wounded, from a burning tank during World War Two.

Five years later, his AK-47 was chosen by the military over models proposed by some of the same designers.

Kalashnikov used to say that simplicity and reliability saved lives in war situations.

“So this has been my lifetime motto – I have created weapons … to be simple and reliable.”

Those qualities have led to much imitation. About half of the world’s roughly estimated 100 million Kalashnikovs are counterfeit copies produced without licences.

“This powerful rifle … is the quickest, easiest, and cheapest way to turn a farmer, teacher, peasant or even a teenager into an effective killing machine,” Larry Kahaner wrote in his book “AK-47: The Weapon that Changed the Face of War”.

“Many western military experts consider it a piece of junk,” he wrote. But he added: “Some U.S. soldiers prefer the AK especially in Iraq where dust tends to jam their M-16 rifles but does not affect the AK.”

The Kalashnikov is officially in service in 55 countries of the world. Several national emblems feature the rifle, and some boys in developing nations have been named “Kalash” after it.

Mikhail Timofeyevich Kalashnikov was born on Nov. 10, 1919 – during the civil war that followed the Bolshevik Revolution – into a large peasant family in the village of Kurya in the remote Altai region of southern Siberia.

In Soviet times, he was twice honoured as “Hero of Socialist Labour” and became a Stalin Prize and Lenin Prize laureate. Once a Red Army sergeant, he was given the rank of colonel in 1969 and subsequently rose to become a two-star general.

In the West, his invention might have made him a millionaire. In Russia, despite all the Kremlin plaudits and decorations, he was not a rich man and lived in a modest Soviet-era apartment in Izhevsk.

After meeting M-16 designer Eugene Stoner in the 1990s, Kalashnikov said the American was flying his own plane, while he could barely afford the ticket from Izhevsk to Moscow. DM

Photo: Mikhail Kalashnikov, the inventor of the rifle named after him, walks in a field near his native village Kurya in Russia’s Altai region, in this September 16, 2007. Kalashnikov, the designer of the assault rifle that has killed more people than any other firearm in the world, died on December 23, 2013, at 94, Russian state news agency Itar-Tass reported. Picture taken September 16, 2007. REUTERS/Andrei Kasprishin