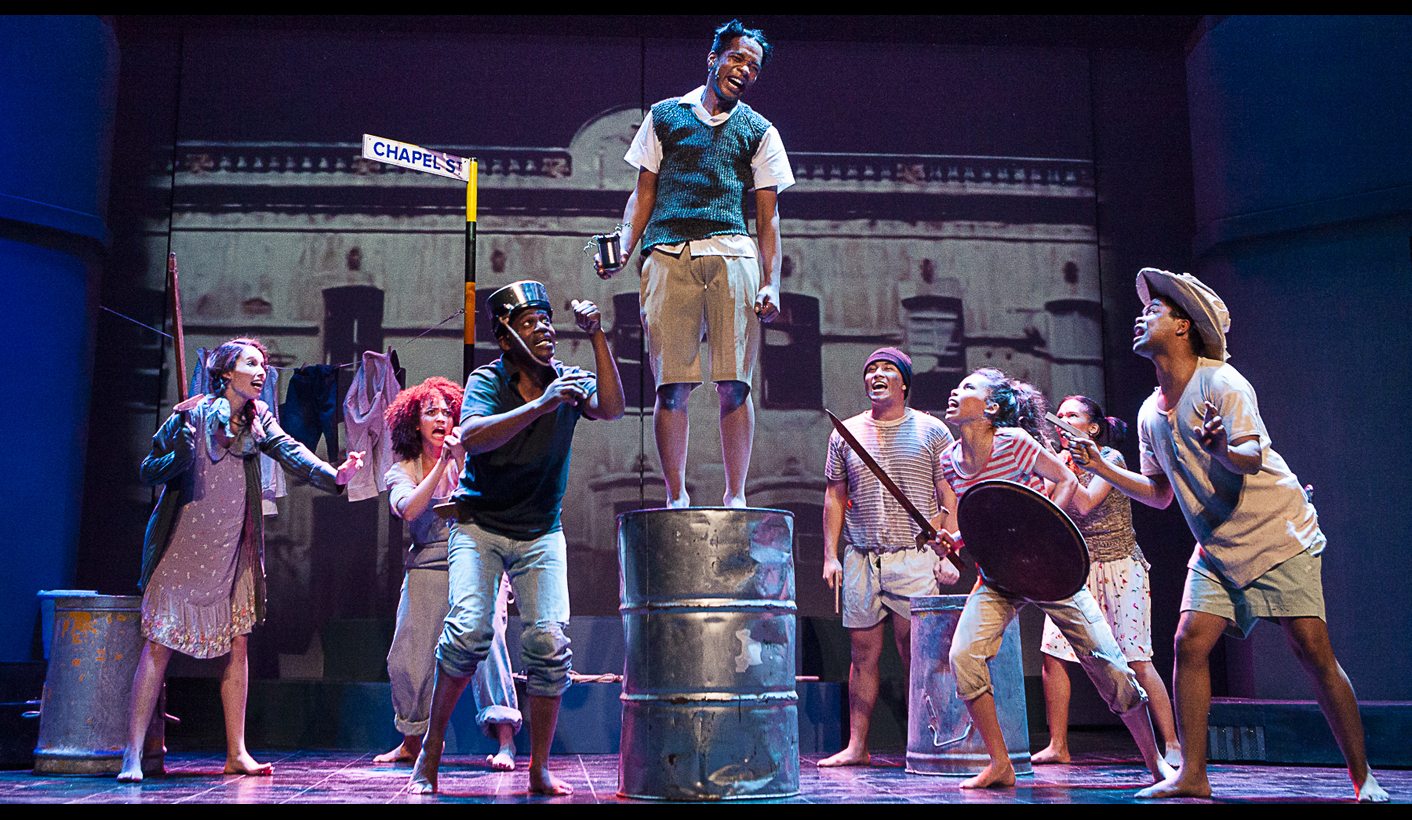 David Kramer deserves huge kudos for being the only man to have ever persuaded British playwright Willy Russell to allow one of his scripts to be adapted to a different setting. And better yet, it really works. By LESLEY STONES.

Transporting Blood Brothers from grimy Liverpool to Cape Town’s District Six works so well that you’d think the musical was written specifically for that setting. By David Kramer himself, no less, since the music, the lyrics and the style all bear those distinct Kramer touches that made his previous shows like District Six and Kat & the Kings so successful.

Yet it’s so localised that a Joburg audience may have trouble interpreting the Cape-tinged Afrikaans that permeates the script. I’d have stood more chance of deciphering a Liverpudlian accent than these colourful characters, although I didn’t miss any of the plot, just some of the pithier quips and clashes.

The story remains the same, and it’s a timeless, placeless tale of twins separated at birth because the mother can’t afford another mouth to feed.

The highlight is undoubtedly Bianca Le Grange as the mother, upon whose slim shoulders the success of the show largely rides. She not only carries it, but elevates it, and at the end when a tear was threatening, it was her quivering voice that put it there.

Buhle Ngaba as Mrs Lyons, the surrogate mother, appeared a little wooden in what should have been a strong supporting role.

The brothers are played with gusto by Dean Balie as Eddie and Ephraim Gordon as Mickey, with Andrea Frankson as their friend Linda. The plot sees Balie, Gordon and Frankson playing their seven-year-old selves for much of the first half, and I felt it worked well. They achieve the necessary bravado and childishness of youth, and you quickly get used to seeing the actors tapping into their inner children.

Frankson is another highlight, with a voice that can move you by its power or by its softness in the duet ‘I’m Not Saying A Word’ with Balie. That song was a solo in the original production, since the actress who first played the role couldn’t sing. Russell was never happy about that compromise and has used this adaptation to address that longstanding niggle. It works superbly, now becoming one of the strongest elements of the score.

Russell is the dramatist, lyricist and composer who wrote Educating Rita and Shirley Valentine, weaving bittersweet but magical stories of downtrodden people triumphing over their circumstances. Blood Brothers is a bleaker tale, the story of a secret pact and good intentions going terribly awry.

It ran for 24 years in London’s West End, and with such an excellent pedigree I expected the show to reach more joyful highs and more heart stirring lows. Instead it maintained a steady pitch of emotion, without erupting into moments that really linger.

Although there are no show-stopping songs, the finale ‘Tell Me It’s Not True’ is a poignant ensemble number where the sound is at its strongest.

The story is introduced by Elton Landrew as the narrator, who remains constantly present, loitering in the shadows or circling the characters menacingly as a portent of the tragedy being spun as the women connive to keep their sorry secret.

It’s an extremely slick production, with a clever set featuring sliding doors that allow easy scene changes that serve to enhance the flow. The costumes by Penny Simpson are authentically down-at-heel, the lighting is slick and the band never drowns out the singers as they perform the now distinctly Cape-flavoured tunes.

But it’s the story itself that remains most memorable, with sad lives temporarily uplifted by optimism and love, until they are eroded by grim reality.