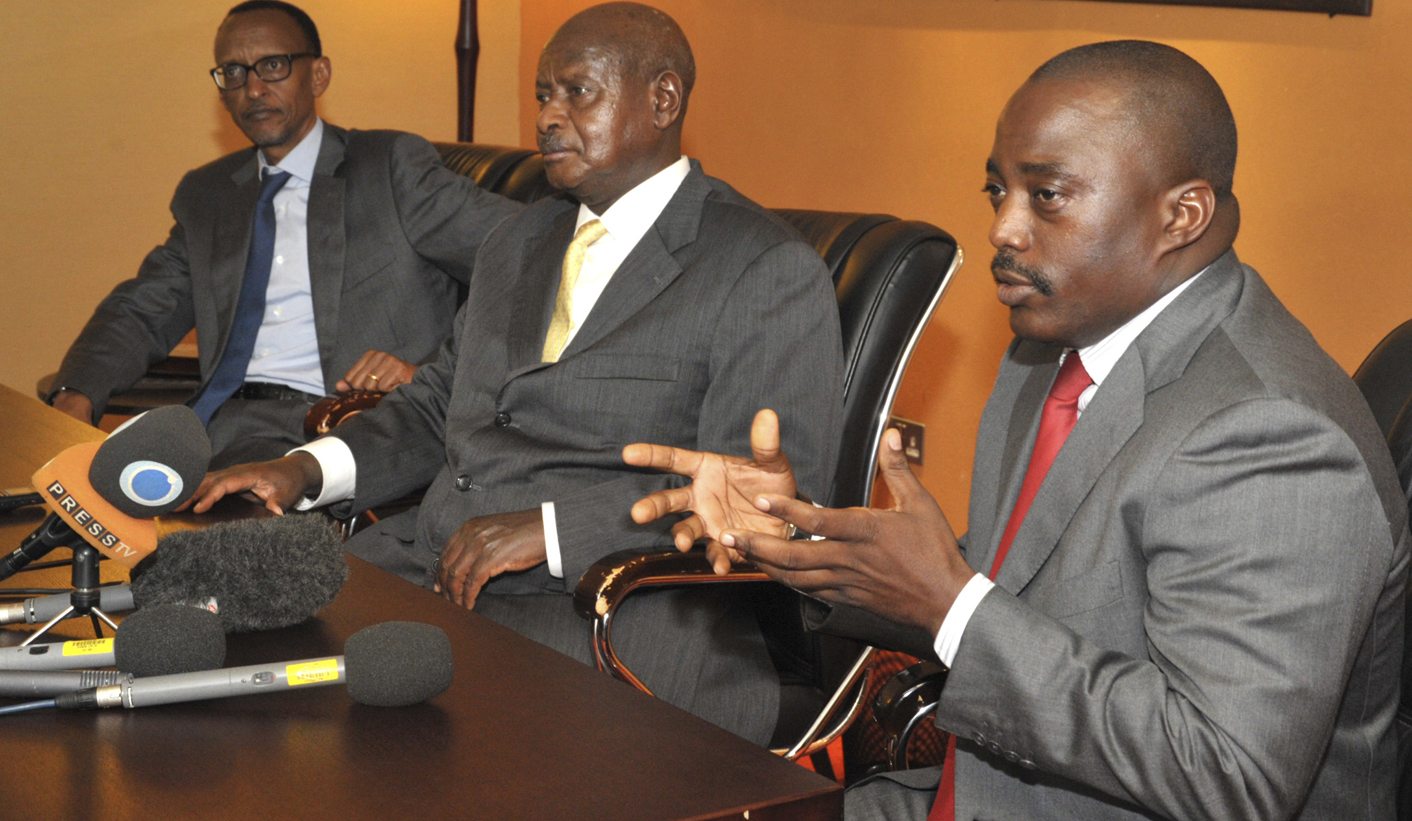 The Congolese government delegation has quit Ugandan-hosted talks with M23 rebels, saying Kampala's support for insurgents was to blame for the failure to sign a document due to officially end Congo's latest rebellion. By Pete Jones and Richard Lough.

Congo’s accusations against Uganda shows the deep mistrust in the region, a barrier standing in the way of long-term peace despite the defeat of the M23’s 20-month insurgency by Congo’s United Nations-backed army.

Okello Oryem, Uganda’s junior foreign affairs minister, did not immediately comment on the accusations, but said he expected it would take a few more days before any deal could be signed to end the most serious Congolese uprising in a decade.

“Uganda remains the only reliable peace partner for DRC. What affects them, affects us,” said Lieutenant Colonel Paddy Ankunda, spokesman for the Uganda mediation team.

Congolese and rebel negotiators failed to agree on the wording of the document meant to cap the army’s swift military gains that led to M23 last week abandoning its uprising in Congo’s mineral-rich border zone with Rwanda and Uganda.

“What are we supposed to sign? No country in history has signed an agreement with a movement that has declared its own dissolution,” said Lambert Mende, a spokesman for Democratic Republic of Congo’s government.

Mende said Kinshasa wanted the rebels to pledge not to take up arms again but Uganda was blocking this. “Uganda seems now to be acting as part of the conflict. It has interests in M23.”

Uganda and Rwanda have both been accused by U.N. experts of backing M23, the latest in a series of uprisings led by Congolese Tutsi fighters in the east, which is rich in gold, diamonds and other minerals. Both countries deny the charges.

“A military victory was achieved but the political problems remain,” said Martin Kobler, head of the U.N. mission in Congo.

Still, he said he was encouraged by the fact that both parties had agreed on the content of the document, adding that the main stumbling point was the wording of the title.

Bertrand Bisimwa, political head of the M23, was not immediately available for comment. Sultani Makenga, its military chief, is being held by Uganda after he abandoned the rebels’ last hill-top positions with hundreds of fighters.

Despite the demise of M23, a plethora of other rebel groups operate in eastern Congo, which is also riddled with conflicts over land, ethnicity and access to resources.

Congo’s President Joseph Kabila is keen to capitalise on his army’s victory, the first over a major rebellion in the distant, lawless east.

But while the military success has boosted his popularity in Kinshasa and may help his long-term political prospects amid speculation that he seeks to run for a third term in 2016, some are wary of government concessions.

“I don’t see why we should sign an agreement with a group of rebels when we have proven to them that we are stronger,” said Vincent Muziga, a civil servant in the capital. “Why should we give in and go to Kampala to sign agreements?,” he added.

Envoys from the United Nations, European Union, African Union and United States had gathered in Uganda for the signing and insisted on further talks after it fell through.

“The Envoys urge the parties to resolve the differences relating to the format of the document and to remain committed to a peaceful settlement of the conflict,” they said.

A second source close to the peace talks said the Kinshasa and M23 delegations had both initialled each page.

The accord will address issues such as amnesty – for the act of rebellion, though not for crimes against humanity. That will almost certainly mean no amnesty for Makenga.