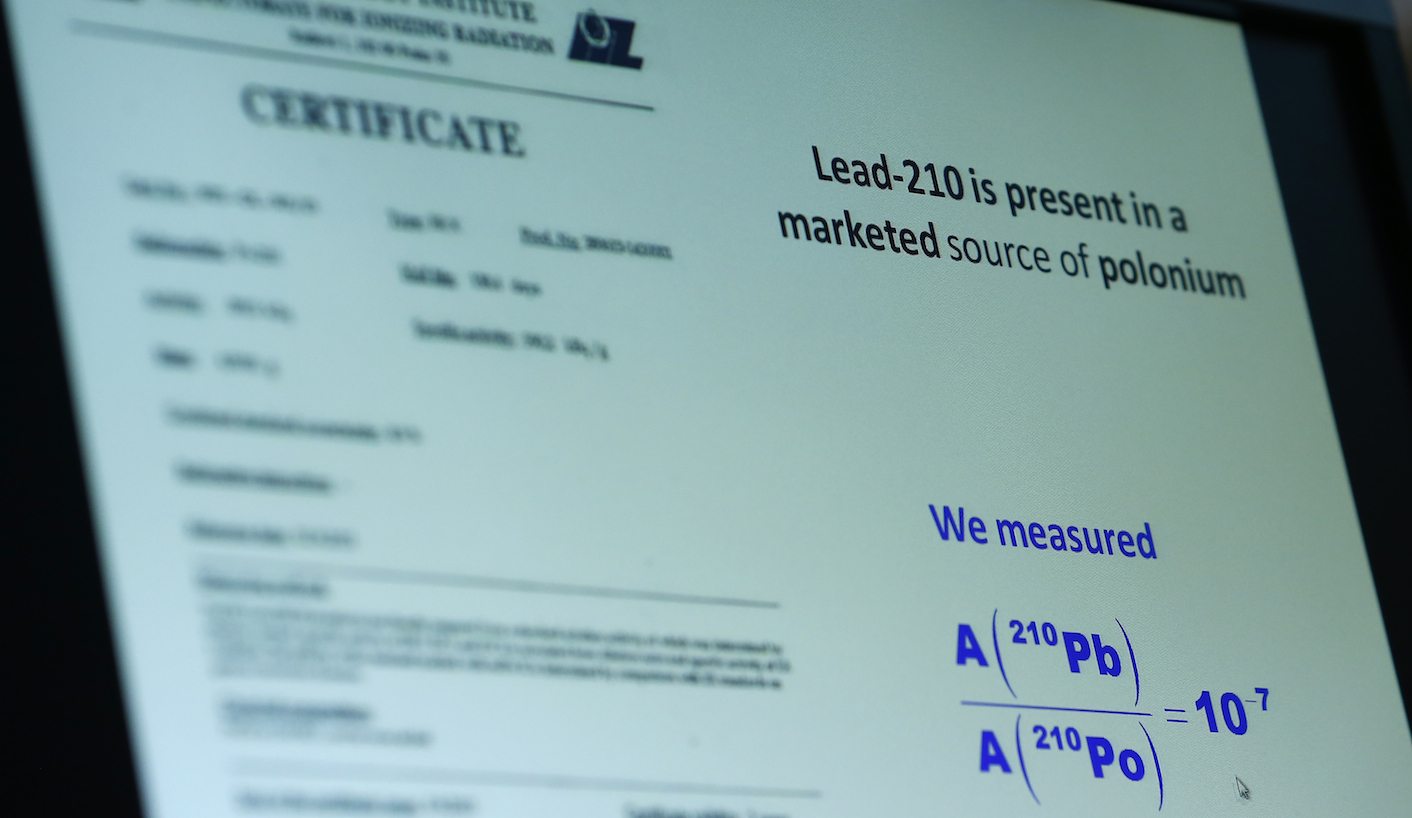 The remains of Palestinian leader Yasser Arafat showed test results consistent with polonium poisoning and should lead to a judicial investigation even if they were not absolute proof that he died that way, Swiss experts say. By STEPHANIE NEBEHAY

The two forensic experts were part of an international team that opened Arafat’s grave in the West Bank city of Ramallah last November and took samples from his body to see if there was evidence he was poisoned with the radioactive element. Their report was released on Wednesday.

“Our observations are coherent with a hypothesis of poisoning, in any case more consistent than with the opposite hypothesis (of no poisoning),” Patrice Mangin, director of Lausanne University Hospital’s centre of legal medicine, told a news conference.

Doubts remained, although they had exhausted all forensic investigations into existing specimens, he said. Biological samples taken from Arafat’s body at the time of his death in a hospital in France in November 2004 have been destroyed.

“The doubt is enough to induce more investigation, but at a judicial level, to open an inquiry to look at other kinds of evidence, not measurements, but contacts between Palestinians and other people,” Mangin told Reuters in an interview.

“From my point of view, the evidence is more in the country where President Arafat was living,” he added.

Francois Bochud, director of the university’s Institute of Radiation Physics, said the evidence was not conclusive

“Can we say with certitude that polonium was the cause of death of President Arafat? Unfortunately for those of you who want a clearly-defined answer, the answer is no. That is to say, our study did not permit us to demonstrate categorically the hypothesis of poisoning by polonium.

Bochud told Reuters: “We cannot tell how much polonium actually was ingested, only that our observations are compatible with the poisoning hypothesis.”

Arafat died in a French hospital in Nov 2004, four weeks after falling ill after a meal with vomiting and stomach pains. The official cause of death was a massive stroke but French doctors said at the time they were unable to determine the origin of his illness. No autopsy was carried out.

His widow Suha initiated Swiss testing on his personal effects in 2012 to probe whether he had been poisoned and the results lead to analyses on samples taken from his corpse, including bones, hair and his shroud.

The technical report of 108 pages was handed over on Tuesday at a secret meeting in a Geneva hotel to representatives of Suha and the Palestinian Authority, who commissioned the report and split the costs equally.

It opened “the gates of hell”, one insider told Reuters.

The report was posted in full on the website of the Qatar-based Al Jazeera’s television news channel. http://link.reuters.com/zuk54v

There are few known cases of polonium poisoning, the most famous recent example being that of defecting Russian spy Alexander Litvinenko, who drank a poisoned cup of tea in a London hotel in 2006. From his deathbed, Litvinenko accused Russian President Vladimir Putin of ordering his murder

Bochud said a few micrograms of polonium would be enough to kill somebody.

“For example, it could be put in a drink, or food would be a possibility, 5 micrograms is almost nothing at all,” he said.

“What we know about the time lag between ingestion of radioactive poisoning and death is that usually it lasts around one month. This is commonly observed in radiation poisoning and this is actually also the case that we observed with Mr. Arafat,” Bochud said.

Arafat’s widow Suha told Reuters in Paris on Wednesday: “We are revealing a real crime, a political assassination.”

“It is scientifically proved that he didn’t die a natural death and we have scientific proof that this man was killed.”

She told Reuters the polonium must have been administered by someone “in his close circle” because experts had told her the poison would have been put in his coffee, tea or water.

She did not accuse any country or person, and acknowledged that the historic leader of the Palestine Liberation Organization had many enemies, although she noted that Israel had branded him an obstacle to peace. Israel denied any involvement in his death.

Arafat signed the 1993 Oslo interim peace accords with Israel and led a subsequent uprising after the failure of talks in 2000 on a comprehensive agreement.

No autopsy was carried out on Arafat, whose official cause of death was a stroke. The Swiss report said that blood, urine, faecal and cerebrospinal samples taken during his hospitalisation in France were “subsequently destroyed”.

“Certainly if we had access to biological samples taken from Mr. Arafat in Paris (at the time of his death), if they had been preserved, we might have been more categorical,” Bochud said.DM

Photo: Analysis of results on research conducted on the remains of Palestinian leader Yasser Arafat, is displayed on a screen during a news conference at the University Hospital forensic centre in Lausanne. (REUTERS/Denis Balibouse)