Mursi faces trial in Egypt in test of democracy 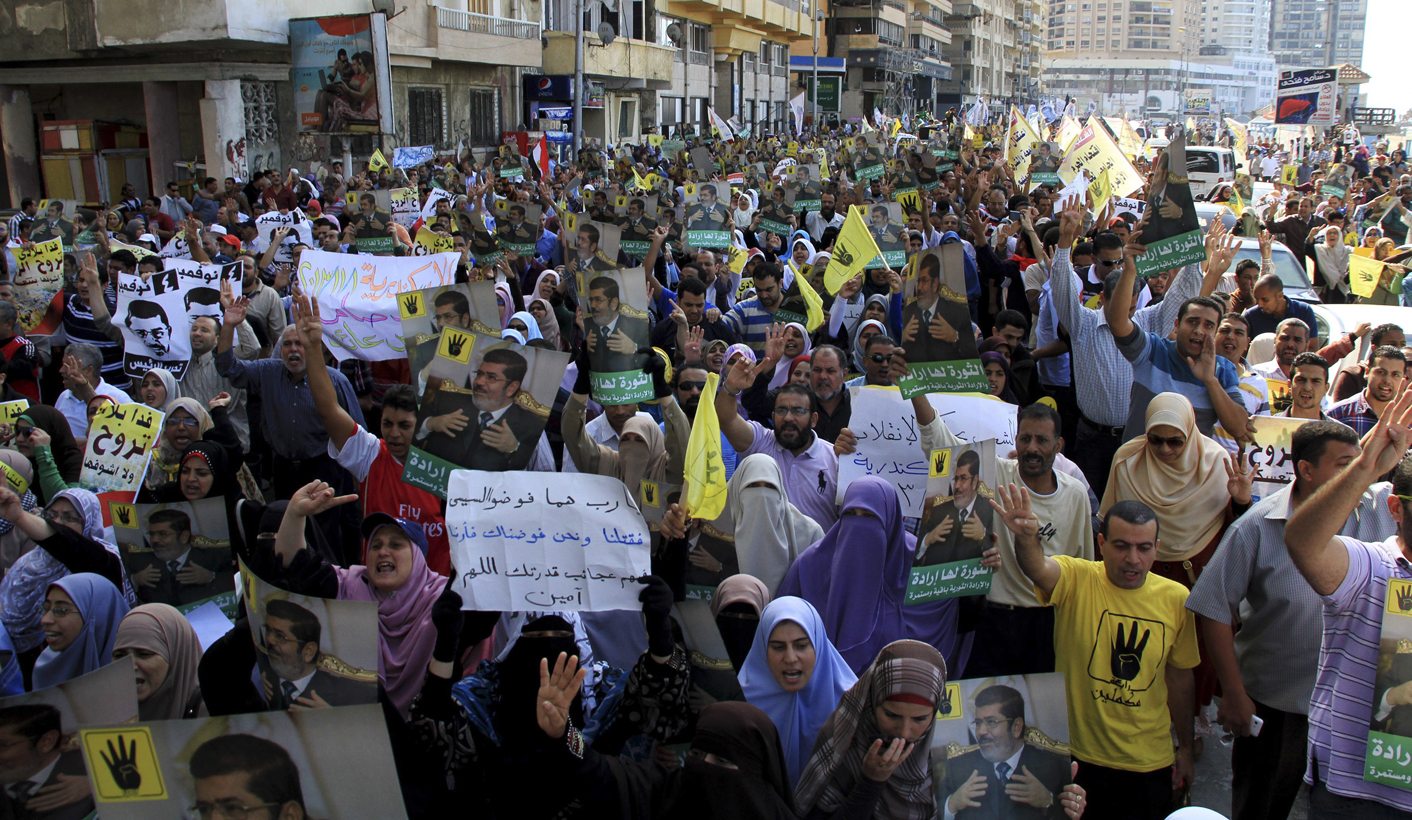 The first freely elected Egyptian president, Mohamed Mursi, goes on trial on Monday, the second time in just over two years that a deposed president has found himself in court in Egypt, a pivotal Arab nation some fear is sliding back into autocratic rule. By Yara Bayoumy.

The trial raises the fear of deepening instability in the Arab world’s most populous country, as Mursi’s Muslim Brotherhood has said it would defy a security crackdown and press on with street protests to pressure the army, which toppled Mursi on July 3, to reinstate him.

A popular uprising that ousted Hosni Mubarak in 2011 raised hopes that Egypt would embrace democracy and eventually enjoy economic prosperity.

Instead, the struggle between the Brotherhood and the army-backed government has created deep uncertainty.

The trial of Mursi and 14 other Brotherhood officials is likely to be the next flashpoint in their confrontation.

They face charges of inciting violence relating to the deaths of about a dozen people in clashes outside the presidential palace in December after Mursi enraged his opponents with a decree expanding his powers.

The Brotherhood had won every election since Mubarak’s fall and eventually propelled Mursi into power after the Islamist movement endured repression under one dictator after another.

But millions of Egyptians who grew disillusioned with Mursi’s troubled one-year rule took to the streets this summer to demand his resignation.

The army, saying it was responding to the will of the people, deposed him and announced a political roadmap it said would lead to free and fair elections.

But the promises have not reassured Egypt’s Western allies, who had hoped the stranglehold of Egyptian military men would be broken.

Mursi is due to appear in court at the same Cairo police academy where his autocratic predecessor Mubarak also faces trial. The defendants could face a life sentence or death penalty if found guilty.

On the eve of Mursi’s trial, Egypt’s Al Watan newspaper released a video on its website of what it said was him speaking to unidentified individuals during his incarceration.

Dressed in a tracksuit, Mursi described his ouster as “a crime in every way”. The newspaper did not say when the video was made.

The Brotherhood has called on its supporters to stage mass protests on Monday, but the size of their demonstrations has shrunk dramatically in the face of an onslaught by security forces.

Riot police crushed two-Mursi protest camps on Aug. 14, and hundreds of Islamists have been killed and thousands arrested, including the Brotherhood’s top leaders.

Egypt’s oldest and most influential Islamist group has also been banned and its funds seized. Army chief Abdel Fattah al-Sisi, who toppled Mursi, has become immensely popular. Few doubt he would win if he runs for president.

The Brotherhood, which is in disarray, has released a succession of statements urging millions of Egyptians to take to the streets to express support for Mursi. Few heed the call.

“We have faith that the heroic Egyptian people will not let go of their freedom, dignity and value and will instead crawl to the unfair farce of a trial to show the world they are a people … who will never yield their commitment and legitimacy,” the Brotherhood said in a statement.

“If the Brotherhood commit any violations, they will regret it.”

MOTIVES BEHIND THE TRIAL

The Brotherhood maintains Mursi’s ouster was a coup that reversed the democratic gains made after Mubarak’s overthrow.

Human rights groups believe the trial will be a key indicator of whether Egypt will return to democracy or accept domination by the generals once again.

“Tomorrow’s trial is a test for the Egyptian authorities. They should present Mohamed Mursi in court and grant him a fair trial, including the right to challenge the evidence against him in court,” said Hassiba Hadj Sahraoui, Amnesty International’s Deputy Director for the Middle East and North Africa Programme.

“Failing to do so would further call into question the motives behind his trial,” she said, emphasising that the trial cannot proceed without Mursi’s presence in court.

In the most senior visit to Cairo by a U.S. official since Mursi’s fall, Secretary of State John Kerry also called for a fair, transparent trial for all Egyptians.

Egyptian officials admit the path to democracy has been rocky, but say a proper democratic transformation will take time.

Speaking to Reuters by phone, Osama Mursi, the deposed president’s 30-year-old son, said his father had not authorised a defence lawyer and the family would not be attending the trial.

“We do not acknowledge the trial. We are proud of my father and feel strong about his position.” DM