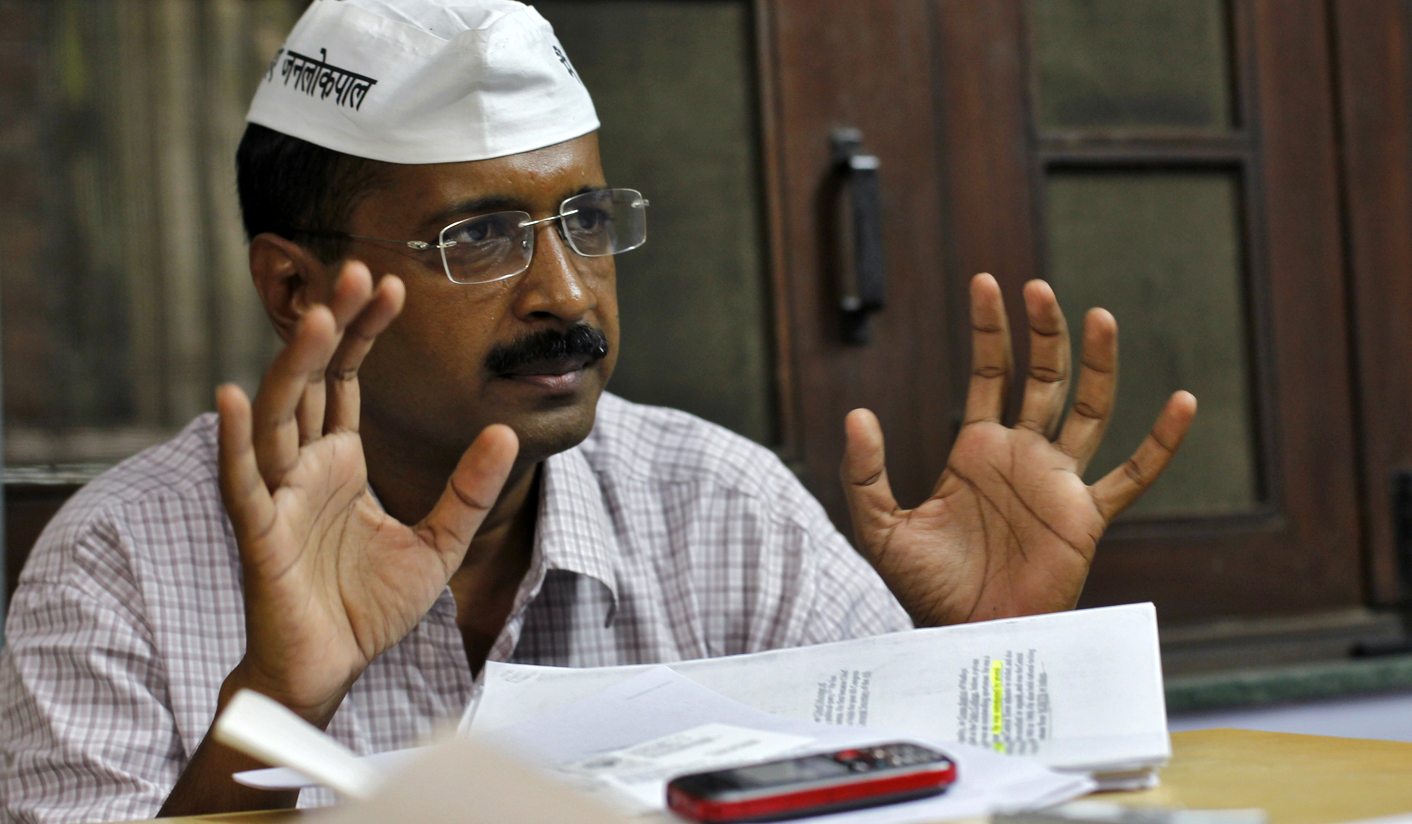 An upstart political party forged in the crucible of an anti-corruption movement that swept India two years ago was long dismissed as irrelevant and slightly eccentric. But the Aam Aadmi (Common Man) Party has suddenly up-ended the calculations of mainstream parties in the race for control of the capital, Delhi, which goes to the polls in December and will set the stage for a national election due by May. By Sanjeev Miglani

The AAP’s leader, Arvind Kejriwal, is an uncompromising anti-corruption crusader who has tapped into a vein of urban anger over the venality of the political class after a string of breathtaking graft scandals.

He is now more popular than any of his rivals vying to become chief minister of a city of 18 million.

“Delhi is the start, we will take this to the rest of the country,” the slight, mild-mannered Kejriwal told Reuters.

The AAP, which promises transparent political funding instead of bags stuffed with cash and candidates without criminal records in a nation where a third of lawmakers stand accused of crimes, may not have enough momentum to win in Delhi.

But a strong showing in its first electoral outing would be an alarming bellwether for the two big national parties on the cusp of a general election, underlining that voters are fed up with old-style politicians and their failure to deliver basic services, from clean drinking water to safer streets for women.

That makes it likely the next government will be an even more rickety coalition than the outgoing administration, which has found it hard enough to make policy and push reform while trying to keep capricious allies on board.

Throughout the interview with Reuters last week, Kejriwal sat cross-legged on the bare floor of a modest house donated by a businessman in central Delhi that serves as the headquarters of a shoestring campaign. He wore workday trousers and a shirt, not the starched-white attire of a political class that is seen as detached and aloof.

“Ultimately the country has to be saved from its politicians and real power returned to the people,” he said.

Volunteers pour in to see the 45-year-old. Some are students drawn by the former tax official’s promise to clean up public life; others have taken a break from careers in places as far away as London and Singapore to join him, brandishing the party symbol – a broom to sweep out corruption.

The boat-shaped ‘Gandhi’ caps that Kejriwal and his band of insurgents wear emblazoned with the words “I am an ordinary man” are a symbolic repudiation of politicians who live in stately colonial-era Delhi bungalows and – according to the AAP – are protected by a dozen police officers each, leaving only one policemen for every 253 residents.

“Why should a politician get more security than an ordinary man? Why do they need to travel in cars with red beacons? And why should they be living in bungalows when your people are living in pitiable conditions in slums?” Kejriwal said, his voice rising in anger.

His message has struck a chord with an increasingly urban electorate restless for change and dominated by the young, making it clear that the winner of next year’s national election will have to deal with popular anger as well as a yawning fiscal gap and fragile economic growth.

“We are all fed up. We haven’t had an honest government for as long as I can remember. We want these criminals to be brought into the streets,” said Anju Chauhan, an affluent Delhi businesswoman.

She has been visiting a slum behind her house every day, offering packets of biscuits and encouraging the poor to change their lives with a vote for the “broom”.

Some of the promises Kejriwal has made reflect the current climate of populism, suggesting that no political party can easily roll back the welfarism of the ruling Congress party.

The party, which is contesting all 70 seats in the Delhi state legislature, says that if it wins power, corrupt lawmakers will be sent to jail within six months. Every family in Delhi will get 700 litres water free every day and their water bills waived. Electricity prices will be halved at the very least.

Earlier this year, Kejriwal asked residents to tear up their electricity and water bills, saying they were inflated and the state was in collusion with power companies.

“How can you even take them seriously,” said Nitin Gadkari, who is running the BJP’s Delhi campaign. “You get these small parties at the time of elections. They come and go.”

Still, there are signs that his party is feeling the heat as the ‘Common Man’ army grows. Last week, it dropped a party warhorse as its candidate to become Delhi chief minister in favour of a low-profile doctor who is untainted by allegations of corruption or abuse of power.

The growing support for Kejriwal’s party and a mish-mash of regional parties suggests the next national government could find it hard to push through its programme, regardless of which of the two main parties comes out of the election on top.

In Delhi, Kejriwal said his group would rather re-run the poll than support either the Congress or the BJP to put together a government if the state election produced no clear winner.

“It would be cheating our voters. They didn’t vote for us so we could go inside the assembly and support these parties,” he said. “We can’t be doing things that we ourselves have long been disgusted with.” DM

Photo: Arvind Kejriwal, a social activist and anti-corruption campaigner, gestures as he speaks during an interview with Reuters in Ghaziabad on the outskirts of New Delhi October 22, 2012. From a shabby house in one of New Delhi’s grimmest suburbs, a mild-mannered former tax official has launched a salvo of accusations of corruption involving some of India’s most powerful people, rocking the political establishment. Picture taken October 22, 2012. REUTERS/Mansi Thapliyal