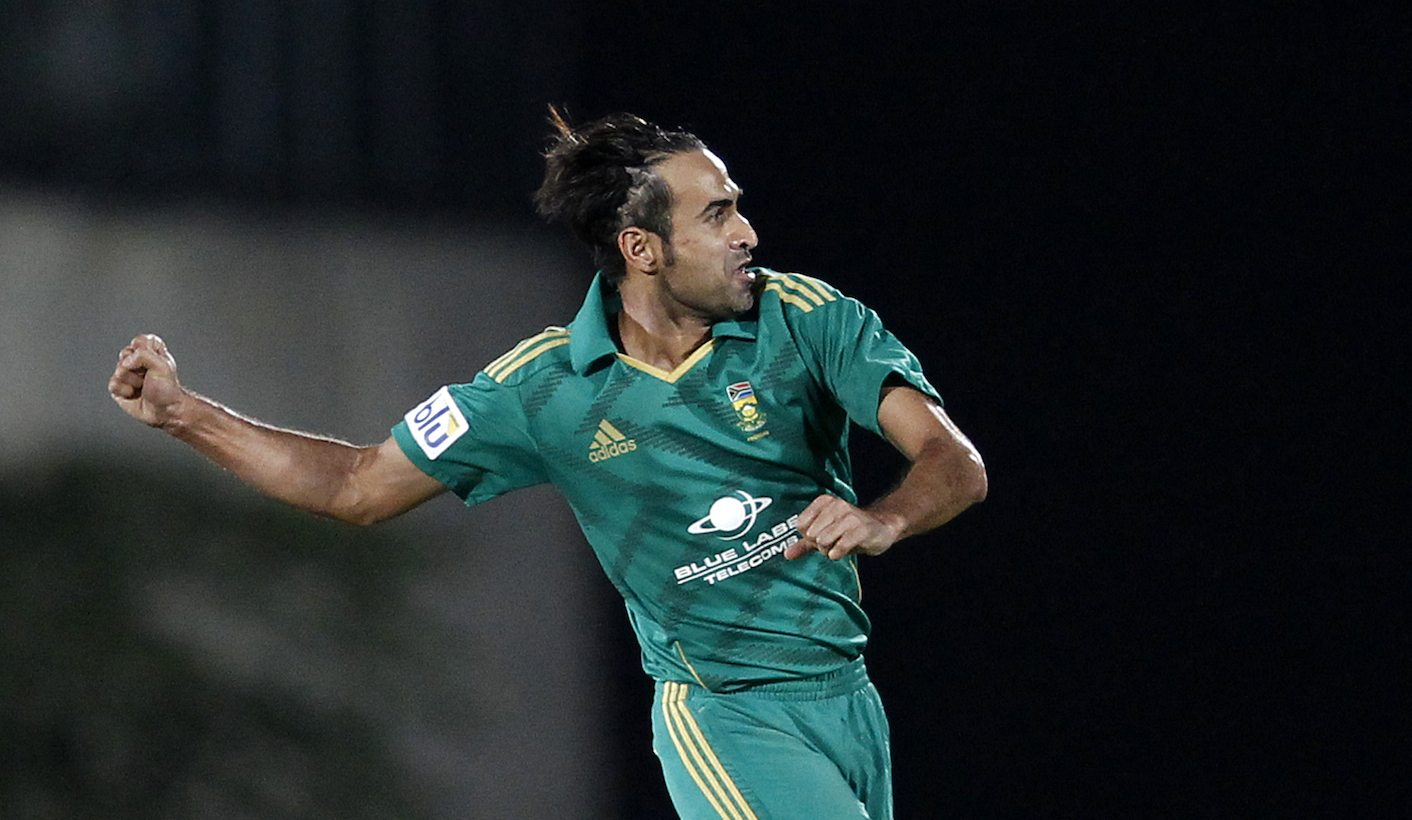 Imran Tahir returned to Test cricket in fine fashion, taking a five-wicket haul as Pakistan folded, being skittled out for 99 on day one in Dubai. South Africa returned to looking like the number one side in the world, for the time being. ANTOINETTE MULLER picks five talking points from the first day.

South Africa bounced back after their loss in Abu Dhabi by looking like the Proteas everyone has come to know over the past 18 months. Robin Peterson was dropped for Imran Tahir, and Hashim Amla, who is on daddy duty, was replaced by Dean Elgar.

After winning the toss and electing to bat first, Pakistan made a mess of the morning session as constant probing by the South African bowlers put them on the back foot. They went from 52-3 to 99 all out, losing seven wickets for just 46 runs.

Tahir returned to Test cricket with a five-wicket haul, Dale Steyn managed to take three despite being an injury concern just a few days ago and both Vernon Philander and Morne Morkel bowled with discipline and accuracy. The batsmen looked far more apt, even with Pakistan’s spinners being as irksome as usual.

The Proteas closed day one of the second Test on 128-3, 29 runs ahead with Graeme Smith still unbeaten on 67. Here are five talking points from the first day in Dubai.

Almost exactly one year ago, Imran Tahir played in a game which many at the time believed would be his last-ever Test for South Africa. He took an absolute pasting against Australia in Adelaide, conceding 260 runs for not a single wicket. After a year of hard graft and not being one for giving up, he returned in emphatic fashion.

Tahir took five for 32, the cheapest by a South African spinner since 1954. He was also the first South African spinner to take five in the opening innings of a Test since Paul Adams did so against Bangladesh in April 2003. With his overzealous and rather unnecessary celebrations, Tahir announced his return loudly and clearly.

In conditions which suit him, Tahir showed that he is a wily old fox and possess the skill to exploit those conditions. South Africa must be ruing not having played the spinner in the first Test in Abu Dhabi and Robin Peterson must be wondering whether he’ll still have a job come the South African summer.

It’s a rather convenient pickle for South Africa to be in since they could always drop an underperforming batsman and just play two spinners instead. It is conceivable that the pair will work well in tandem, but that is a worry for another day. For now, it’s all Tahir with his sprinting off and badge-kissing to boot.

Jacques Kallis hasn’t had the greatest year. In the six Tests he has played this year, he averages just 17.77, with two fifties and a high score of 60. He’s managed just 160 runs in total this year. Those struggles were only ever going to be illuminated against Pakistan. Kallis’ record against Saeed Ajmal is weak.

He’s been out to the spinner five times in four Tests now and out leg-before on three consecutive occasions. In Tests against Pakistan which Saeed Ajmal has played in, Kallis averages just 13.14. It is inevitable that the question of retirement will crop up for South Africa’s faithful servant, who has always said that he will know when it is the right time to go. There is nothing blatant in Kallis’ approach to suggest that he is on the way out and he probably just needs one good knock to kick himself back into the right gear.

Alviro Petersen is having a pretty scratchy run at the top of the order. He has now gone nine innings since passing 30 and averages just 30.92 in the last eight Tests he’s played. For an opener, that’s not quite good enough. He had a decent stint with county Somerset earlier in the year, managing 562 runs in six games at an average of 46.83.

However, county bowling is hardly international standard and although many say it’s as close as you’ll get to playing Test cricket, Petersen has failed to bring that form to the national team. Dean Elgar is the other opener in the side, but he still looks innocuous more often than not. Graeme Smith remains the mainstay of the top order, but he needs an effective partner in order to ensure prolonged success for South Africa. With the way things are looking at the moment, it doesn’t look like Petersen is the answer.

A look back to history

When England visited Dubai and were thrashed by Pakistan, they also managed to bowl the hosts out for 99 at Dubai. In response, the visitors fumbled their way to 141 all out. South Africa could very well escape that dubious honour, but it’s vital that they remember the job is far from done. Sure, Pakistan were back to their old familiar ineptitude and the bowlers did brilliantly on the first morning, but Dubai is unforgiving and if you blink, it will come back to bite you. Pakistan has never lost a Test at the venue and although the South Africans are sitting in the pound seats, Test cricket is a funny old game.

Woe is a two-match series

Whatever happens, it is a great shame that the two sides are only playing two Tests against each other. Pakistan were so wonderfully entertaining in the first game and South Africa have been so brutally destructive in the second, it’s a really shame the two teams won’t get to do it one more time once it’s all over.

The scheduling of the Future Tours Programme has been debated to no end over the last year, but there’s nothing like a proper Test tussle to serve as a reminder that it needs looking at again. Five for all tours might be far too much to ask, but a three-Test minimum doesn’t seem too unfair. Of course, Test cricket doesn’t make any money in most countries, so it gets sold short in most cases. It’s nothing short of a cricketing tragedy that the number one-ranked Test side will get to play just two more Tests this year after they conclude their series with Pakistan. The fourth-ranked team gets four Tests for the rest of the year while the fifth ranked team gets five. A crying shame of scheduling indiscretion.

Day one close of play summary: