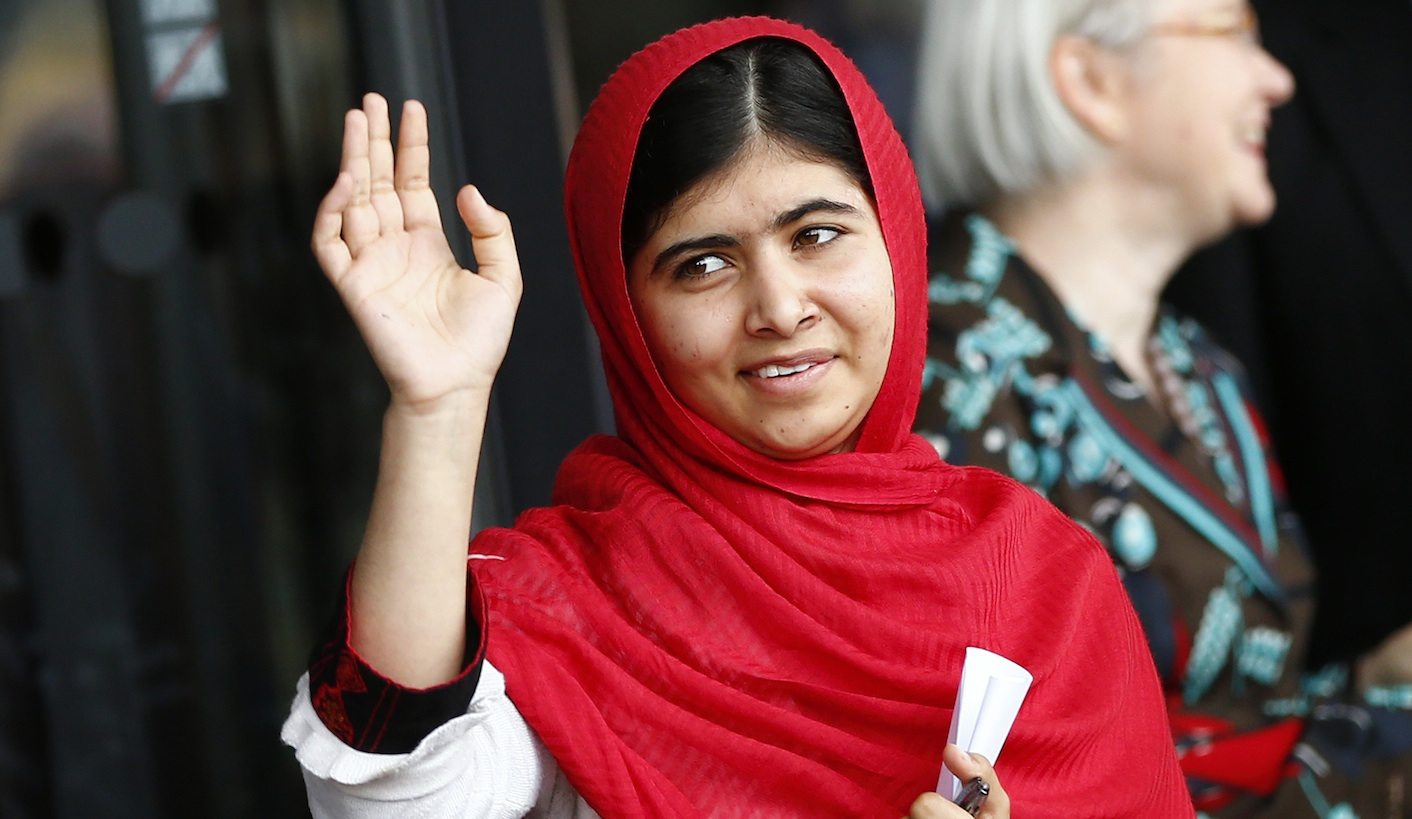 Wednesday, October 9, 2013 was the first anniversary of the day Malala Yousafzai was shot by the Taliban in the Swat valley in Pakistan. It has been quite a year for the 16-year-old. On Friday, she is tipped to become the youngest winner of the Nobel Peace Prize. By KHADIJA PATEL.

Driving through the Yorkshire countryside, BBC Radio’s news broadcasts are peppered with sound clips from an address Malala Yousafzai had given at the opening of “Europe’s largest library” in Birmingham that day.

“Pens and books are the weapons that defeat terrorism. I truly believe the only way we can create global peace is through educating not only our minds, but our hearts and our souls,” Yousafzai said to the sound of rapturous applause crackling through the radio.

“Someone must be writing her speeches for her,” my uncle, our host and designated driver, said.

He felt Yousafzai was just too young to be so erudite.

Beside him in the passenger seat, my dad napped. The previous day’s radiobroadcast, “Transfer Deadline Day”, was more attuned to his interests. But as we drove on to Liverpool, Yousafzai’s words continued to dominate the headlines and overshadow concerns that the £188m civic library was too costly.

I thought about my uncle’s comment for a few minutes, recalling as well Yousafzai’s rousing speech to the United Nations Youth Assembly in July. Her speeches certainly are well written. But the greatness of her speeches lies in more than the arrangement of the words she uses. It is the calm and confidence she shows when delivering these speeches that is astonishing.

And indeed for a 16-year-old to show such evidence of learning, to show such an awareness of the greater good, is extraordinary. Listening to clips of her speech, I was left feeling a little ashamed. My pursuits (which at that moment amounted to realising the childhood dream of visiting the Anfield stadium) felt trivial. Indeed I felt that I could probably live my entire life without ever contributing to the world as she has, or enduring the challenges she has with such equanimity.

“Her father probably helps her,” I said, thinking of the support Ziauddin Yousafzai has offered his daughter through her pursuit of an education.

It was the elder Yousafzai, a teacher who ran a co-ed school in Swat, who invited a New York Times documentary maker into his home to talk about the Taliban ban on girls attending school.

Malala was 11 years old at the time, but she quickly became the star of the show, saying, “I want to get my education. I want to become a doctor.”

Back in the car, my uncle nodded thoughtfully at my speculation of her father’s input in her speeches, and we kept listening.

The presenters were now sharing a chuckle at Malala’s pronunciation of “Brummies”, as residents of Birmingham know each other.

Addressing the crowd as “fellow Brummies”, she said she was honoured to have been invited to open the library. “Birmingham is very special for me because it is here that I found myself alive, seven days after I was shot.”

Now, a year later, Yousafzai stands in line to win the Nobel Peace Prize, certainly the most prestigious of the accolades and awards that have been showered on her this year. She really is an extraordinary young woman, and an inspiration to the millions of young people around the world struggling to find their way in an unkind world.

Certainly in our family we’re more likely to be tut-tutting 16-year olds (or indeed 25-year-olds) for being layabouts without any ambition or a care in the world.

And I doubt our family is that unique in its despair for its young ones either.

There is, on one hand, this absolute belief that young people will make the world a better place, or, in conference speak, “to influence positive change”. And then there is another image of young people as freeloading louts with nothing to offer the world except recklessness and expense.

As the Irish playwright George Bernard Shaw put it, “Youth is such a wonderful thing, it is a shame to waste it on young people.”

And yet Malala Yousafzai defies these remonstrations of young people. She exceeds the petty expectations of what young people ought, or ought not to be.

“I know that you must not be afraid of death. And you must move forward. You must go forward, because education and peace is very important,” Yousafzai said this week.

She has become an icon of the struggle for women’s education in Pakistan and indeed across the world.

Still, one Taliban commander claims Yousafzai was not attacked for her advocacy of girls’ education at all. In an open letter to Yousafzai a week after her address to the UN, Adnan Rasheed said she was not shot for promoting schooling for girls – but rather for her “smear campaign” against the Taliban.

And this week the Taliban warned that Yousafzai is still a target.

In a telephone interview late Monday night with the Washington Post “a top Taliban spokesman said the group would continue to look for opportunities to harm the 16-year-old girl as long as she remains an outspoken critic of efforts to impose strict Islamic law in Pakistan.”

In Pakistan itself Yousafzai is viewed ambivalently.

The Globe and Mail reports this week that the Malala Movement, the foundation promoting equal access to education in Yousafzai’s name, has led to a backlash in Pakistan, “where some view her as a tool of the West, used to embarrass their country, culture and religion”.

But it’s not only in Pakistan where there are reservations about the way Yousafzai’s experiences are being treated.

“This is a story of a native girl being saved by the white man. Flown to the UK, the Western world can feel good about itself as they save the native woman from the savage men of her home nation,” Baig writes.

And yet despite the great global noise that has now been attached to her name, and the outright exploitation of her deals for political expediency, despite the global scrutiny that has been thrust on her, it is just as well that Malala also defies our notions of her precociousness.

In an interview with a Canadian radio station this week, she admitted to reading Twilight (and liking it), listening to Justin Bieber (and liking that too), proving that she is also a 16-year-old saddled with the poor taste that is the curse of youth.

And back on the road in England, a BBC reporter gushes with descriptions of the new library, reporting as well that the audience was particularly charmed by Yousafzai’s description of herself as a “Brummie”. DM