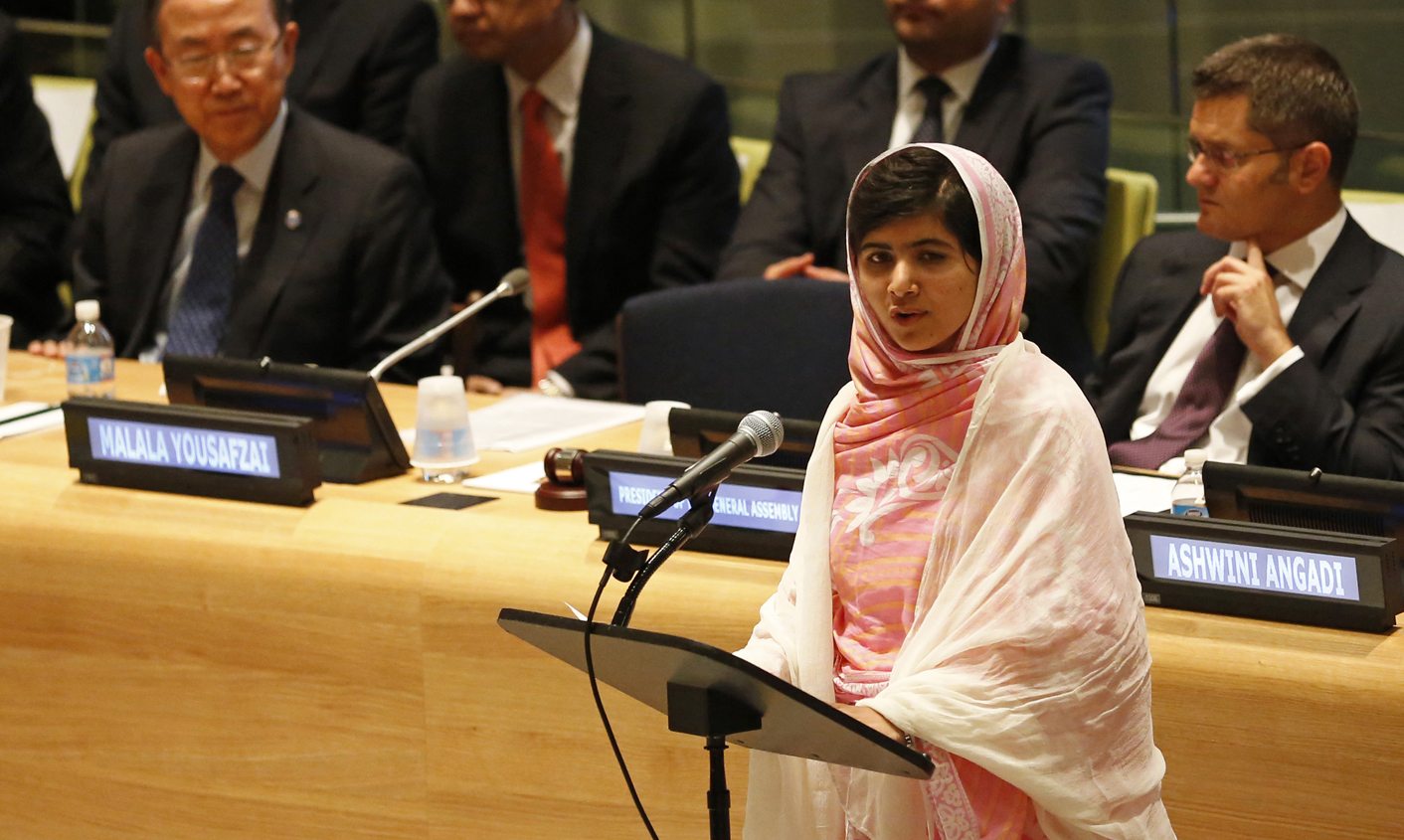 Sixteen-year-old Malala Yousafzai inspired millions of people around the world when she addressed the United Nations on Friday. She persuasively called for “all governments to ensure free, compulsory education all over the world for every child and [to] fight against terrorism and violence”. But is her experience being used to further the political ambitions of others? By KHADIJA PATEL.

Malala Yousafzai addressed the United Nations general assembly on Friday afternoon with a confidence that belied her years and personal circumstances. Propelled to the international spotlight after the Taleban shot her last year, 16-year-old Yousafzai has become an icon of the struggle for access to education in Pakistan.

And yet, when she spoke in New York on Friday, she sought to point out that she was not that unique, that many, many more people were struggling for the same rights without the benefit of global support.

It was the commitment she showed to conciliation, the restraint she showed against avenging her personal injuries that was remarkable.

She said, “I want education for the sons and daughters of the Taliban and all the terrorists and extremists. I do not even hate the Talib who shot me.”

Her message was a stark contradiction to a presentation played ahead of a screening of her speech at Wits University. One slide read, “Kill the Taliban”.

“Even if there was a gun in my hand and he was standing in front of me, I would not shoot him. This is the compassion I have learned from Mohamed, the prophet of mercy, Jesus Christ and Lord Buddha. This [is] the legacy of change I have inherited from Martin Luther King, Nelson Mandela and Mohammed Ali Jinnah,” Yousafzai said.

Professor Mary Metcalfe, who was a speaker at a panel discussion at Wits that followed the screening organised by One Young World, said she felt uncomfortable by the “sermonising” in the presentations that were aired ahead of the screening.

“This anti-Muslim thing was offensive to me and we all need to keep that critical ear and eye,” Metcalfe said.

Tasneem Essop, secretary of the Wits Students Representative Council, spoke too of the apparent disjuncture between Malala’s actual advocacy and the swirl of global conversation that has erupted around her.

“Behind this story, for me, is that brutality is not arbitrary. Brutality does not come out of nowhere.”

She too, took umbrage at the presentations played ahead of the screening of Yousafzai’s speech.

Essop’s invocation for more context to be tempered into media coverage of Malala’s brutal attack, or the Taliban’s reprehensible denial of education to girls, was a call ultimately for Malala not to be expropriated by the political ambitions of others.

Political battles are often waged with women’s bodies as their emblems, and Western Islamophobia is no exception. So, too, Malala’s advocacy and her experience at the hands of the Taleban, cannot be used to justify the CIA’s drone programme in Pakistan, which blurs the distinction between civilian and combatant, child and adult.

Essop noted that the right to a basic education could no longer be termed debatable. Chinezi Chijoke, an education advisor at consulting firm McKinsey, agreed, noting that the right to education was unequivocal – but adding that impediments towards that right continue to exist.

“It shows up in ways that are not as extreme as Malala’s experience,” Chijoke said.

And Malala’s own speech addressed the global challenges to education.

“In India, innocent and poor children are victims of child labour. Many schools have been destroyed in Nigeria. People in Afghanistan have been affected by extremism,” she said. “Young girls have to do domestic child labour and are forced to get married at an early age. Poverty, ignorance, injustice, racism and the deprivation of basic rights are the main problems, faced by both men and women.”

Closer to home, Nthabi Pooe, formerly a researcher at Section27 and now a clerk at the Constitutional Court, spoke about such impediments in Limpopo, where the decision by a community to establish its own school was met with resistance from the Department of Basic Education, who felt learners should attend the school in a neighbouring village.

“The community said, ‘Our children are attacked by baboons, they are bitten by snakes and they are raped by men – and how do you expect our children to go there?’”

And it is ultimately through these struggles that Yousafzai’s own struggle for an education resonates.

She said, “So let us wage a glorious struggle against illiteracy, poverty and terrorism, let us pick up our books and our pens; they are the most powerful weapons. One child, one teacher, one book and one pen can change the world. Education is the only solution. Education first.” DM

Photo: Malala Yousafzai gives her first speech since the Taliban in Pakistan tried to kill her for advocating education for girls, at the United Nations Headquarters in New York, July 12, 2013. Wearing a pink head scarf, Yousafzai told U.N. Secretary-General Ban Ki-moon (top L) and nearly 1,000 students from around the world attending a Youth Assembly at U.N. headquarters in New York that education was the only way to improve lives. REUTERS/Brendan McDermid