Malala Yousafzai: The crime of wanting an education 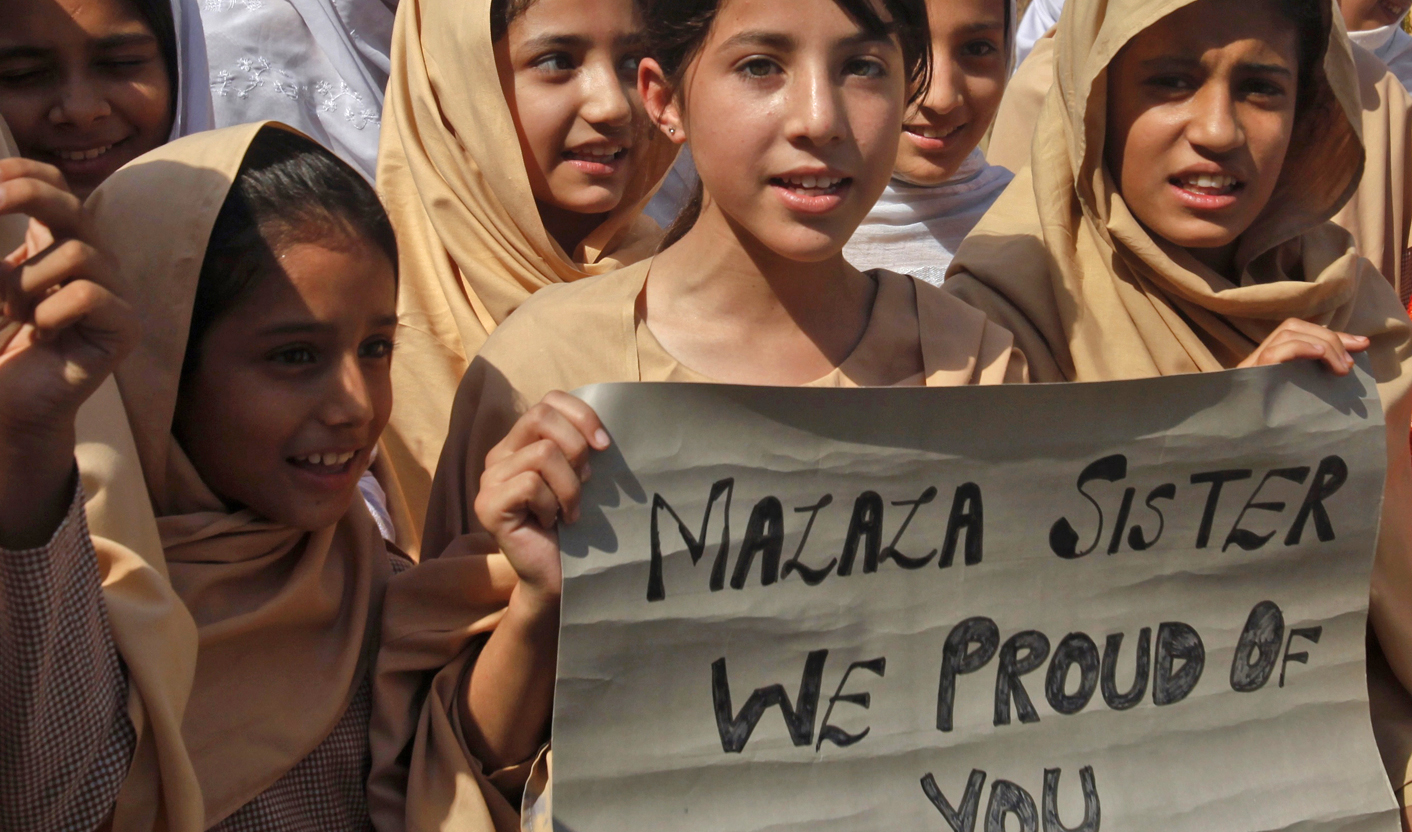 A 14-year old Pakistani girl is recovering from a gunshot to the head after Taliban militants attacked the minibus she was travelling in. But this was no random attack. The girl was targeted, and her assailants have sworn that if she survives, they will come after her again. Her crime? Wanting equal access to education for girls. By KHADIJA PATEL.

Malala Yousafzai was 11 years old when she began writing for the BBC’s Urdu Service under a pseudonym. As conflict waged swept through her town in north-western Pakistan in 2009, Yousafzai wrote about her passion for education — she wanted to become a doctor, she said, on her way to becoming a symbol of resistance to the Taliban insurgency in Pakistan.

And though control of her hometown has since been wrested back from the Taliban, Yousafzai, now aged 14, continues to be iconic of the Pakistani struggle against the Taliban. Last year our own Archbishop Emeritus Desmond Tutu nominated her for the International Children’s Peace Prize. The Pakistani government awarded her with the National Peace Award for Youth.

As she continued to be celebrated by international media, Yousafzai also spoke candidly about her dream to someday form and lead a political party in Pakistan that would focus on the right of girls to receive an education.

“I want to become such an inspiring leader to lead the nation, Pakistan,” she said. “Along with that, I also want to serve humanity in whatever shape and form that may be.”

But it was not just the international media that had taken notice of her ambitions.

This week Yousafzai finds herself in hospital, recovering from a gunshot wound to her head, after the minibus she was riding from her girls’ school was attacked on Tuesday.

Within hours of the shooting in Mingora, the largest city in the Swat district, the Tehrik-i Taliban Pakistan claimed responsibility for the attack.

While she recovers from surgery, her doctors upbeat and her family hopeful, a government sponsored aircraft waits to whisk her away to Dubai for better treatment, should she be strong enough to make the journey. Condemnation of the attack has been expressed across Pakistan, by government, angry protesters and even Jamaat-ud-Dawa, the charity wing of the militant group Lashkar-e-Taiba, who tweeted, “Shameful, despicable, barbaric attempt. Curse b upon assassins and perpetrators.”

Why was a mere girl such a threat to men with guns?

A spokesman for Tehrik-i Taliban Pakistan told Radio Mashaal in March that Yousafzai had been placed on a “hit list.” And it was not the first time the Taliban had issued de facto death warrants on girls who dared to seek an education in the region.

In December 2008, Taliban commanders in the Swat Valley who had banned girls from attending school threatened to kill any female students who dared to defy the ban. They had already destroyed scores of government-run schools, leading some to set up private schools in their homes to educate girls. Yousufzai’s father ran one of the last schools to defy Taliban orders to end female education.

At the time, an official at the Pakistani education ministry was reported to have said there were more than 1,580 schools registered in Swat and that militants had destroyed 252 schools, “mainly those where girls and boys were studying together.”

In Afghanistan, the Taliban, who are well known to have prohibited schooling for girls while in power, have softened their approach to girls’ education in areas they control. They have struck a deal with government, where in exchange for not attacking students or teachers, Taliban commanders in the field dictate what is taught in the schools, and by whom. The Abu Dhabi-based National newspaper reported early this year that hundreds of schools had re-opened in this manner. “Most are schools for boys, but a number of girls’ schools have also started re-opening in the last several months,” the report said.

Significantly, however, the reopening of these schools is not the result of government capitulation alone. Some of these agreements are actually the result of Afghan public pressure. There is a demand for access to education.

The attack on Yousufzai, however, has brought into sharp focus the contested level of access to education for girls in Pakistan.

An estimated 20 million 5 – 16-year-olds are not enrolled in a formal education. According to the United Nations Educational, Scientific and Cultural Organisation (UNESCO), there are 7.26 million children out of school at the primary level, and 58 % of these are female.

Statistics show that since the split of the original nation of Pakistan into modern-day Pakistan and Bangladesh, the education of girls in Bangladesh has outstripped that of girls in Pakistan, despite Bangladesh having a far poorer initial resource base. Of all Pakistan’s neighbours, only Nepal has a worse record of girls receiving an education.

Access to education in Pakistan is unequal, but the disparity is not just based on gender.

The disparities are complex, based on gender, rural-urban divide, geographic placement, income, and language of instruction. Quality in many government schools is poor. Enrolment in private educational institutions is 34% of total enrolment. The move towards private schools has not helped improve the state of government schools, but education specialists say even private schooling is often inadequate.

British charity Oxfam puts it like this: “Pakistan’s education system is at breaking point.”

In rural areas, the failings of the education system are more acutely felt.

Only one in every three women has ever attended school. Researchers claim poverty, crowded classes, outmoded teaching methods, and dilapidated school buildings are to blame for the poor enrolment of girls. Parents are reluctant to send their daughters to schools without sanitation facilities, and many view early marriage as a higher priority for their daughters than an education.

Deeply entrenched social norms that emphasise girls’ modesty, protection, and seclusion are said to limit parents’ willingness to send their girls to school. These are also said to be prevalent among the provincial and district education officers responsible for building and provisioning new schools in relatively poor rural areas, as well as among the teachers who staff the schools.

The most traditional attitudes toward girls’ schooling tend to be held by the least educated, leading to a perpetuation of disadvantage.

In recent years, however, there has been a significant rise in private school enrolment at the primary level in rural Pakistan, leading some to suggest that there actually is an unmet demand for girls’ schooling in rural areas. But beyond actual resources, this need competes with culture, politics and conflict. And Malala Yousufzai remains a flag bearer of the struggle to have that need recognised and met. DM

Photo: Students hold a placard during a rally to condemn the attack on schoolgirl Malala Yousufzai in Peshawar October 11, 2012. The Pakistani schoolgirl fighting for her life after being shot by Taliban gunmen was transferred on Thursday from a hospital in a province that is a militant haven to a specialist hospital in the army garrison town of Rawalpindi. Yousufzai, 14, was unconscious in critical condition after being shot in the head and neck as she left school on Tuesday, but doctors said she had moved her arms and legs slightly the night before. REUTERS/Fayaz Aziz