In search of Cape Town’s own Great Gatsby 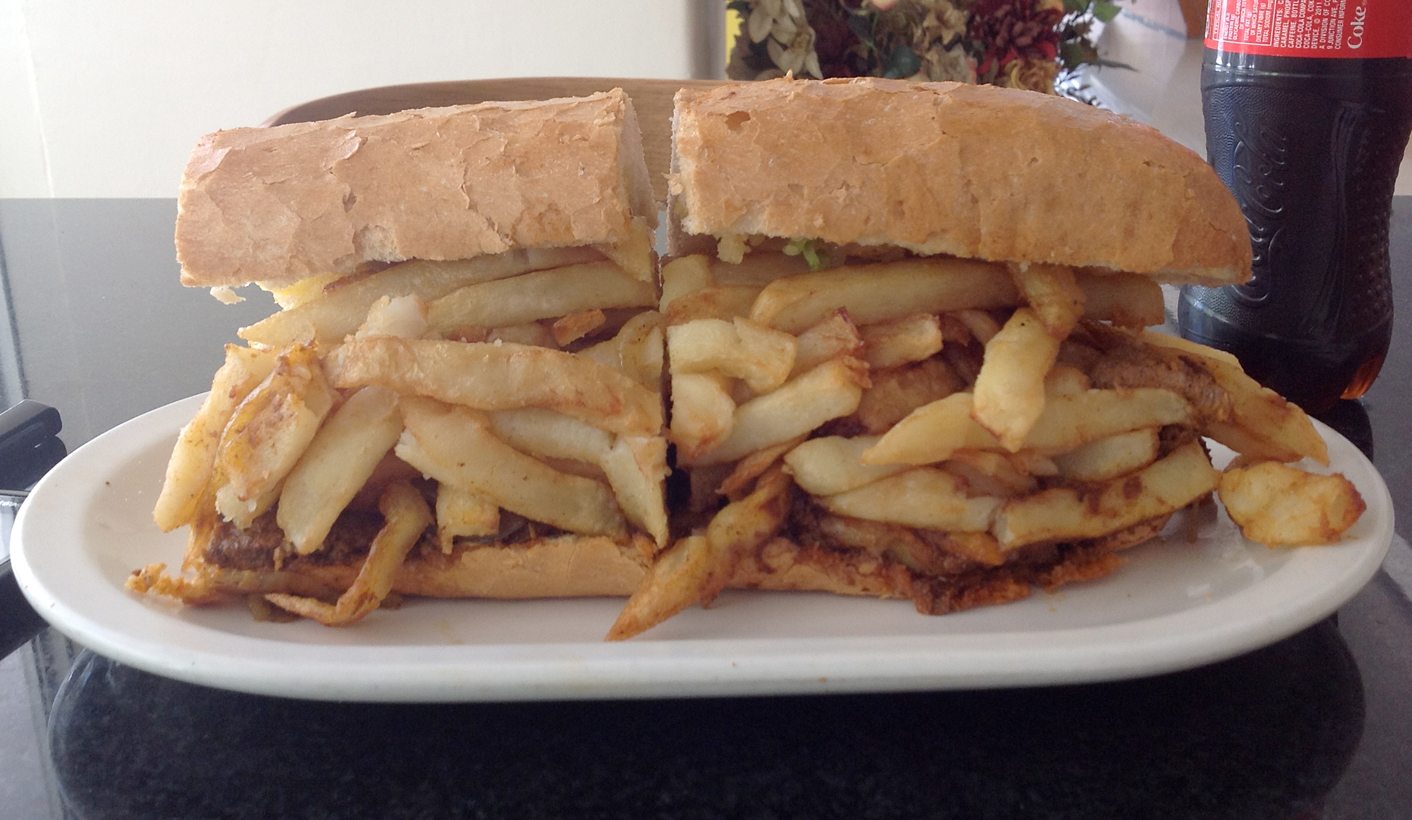 One of Cape Town’s most beloved fast-foods is also one of its least healthy. The Gatsby: traditionally a French loaf halved and filled with slap chips, meat and variables ranging from egg to fried calamari. This is National Nutrition Week, and on Tuesday, an initiative held at the V&A Waterfront aimed to do the unthinkable: prove that a healthy Gatsby was not just possible, but also tasty. Yet as divided reaction on social media showed, the Gatsby is hallowed territory. Gatsby-novice REBECCA DAVIS picked her way through this culinary minefield.

Jay Gatsby, the title character in F. Scott Fitzgerald’s 1925 novel, The Great Gatsby, was a man who strove to keep his background a mystery. The iconic Capetonian uber-sandwich which bears his name has similarly indistinct origins. One creation story simply holds that Cape Flats residents have for many years filled long rolls with meal leftovers to feed multiple people at once – though that wouldn’t explain how the meal acquired its unusual name.

Rashaad Pandy, the man who claims to be Cape Town’s F. Scott Fitzgerald – Gatsby’s creator – is the proprietor of a fast-food store in Athlone called Super Fisheries, which he founded in 1974. On Tuesday, Pandy was one of the guests of honour at a Waterfront event which saw chefs prepare a Gatsby of over 8 metres in length. Given the colossal size of a regular Gatsby – sometimes nicknamed an AK47 partly because it can be cradled in the arm in a similar manner – it appeared only slightly bigger than normal.

But this was no ordinary Gatsby. This was, organisers claimed, South Africa’s “first official heart-healthy Gatsby”. Heleen Meyer, author of Cooking from the Heart, said in a press release put out by sponsor Pharma Dynamics, that the modifications she had made to this Gatsby “translate into a delicious, nutritious Gatsby that is lower in total fat, unhealthy saturated fat and salt, and higher in fibre, making it a better choice for the heart.”

The original Gatsby is a beast of a very different nature. Rashaad Pandy, a neat, grey-haired man, told the Daily Maverick that he created the dish spontaneously one night in 1976. “It happened by accident,” he said, with the air of a man who has told the story many times before.

“I’d hired four guys to clear a plot for me. When we finished that night, there was nothing left in my house for us to eat. So I took a round Portuguese bread, cut it open, and filled it with chips, polony and atchar. One of the guys, Froggie, he reckons: ‘This is a Gatsby smash!’”

There was, Pandy explained, a “bioscope” across the road showing the Robert Redford version of The Great Gatsby film at the time. (The Jack Clayton-directed adaptation was released in the US in 1974, but it seems plausible that it might have been 1976 before it would make its way to Athlone cinemas.)

“Froggie must have seen the film,” Pandy says. “He was a very vibrant kind of guy, he knew My Fair Lady, all that kind of stuff.” What Froggie meant, in describing the food as a “Gatsby smash”, was that it was a massive hit.

Froggie was right. The next day, Pandy experimented by producing a few for customers to try. They were bought and raved about as fast as he could make them. The only major modification he made to his original dish was to substitute the round bread for a long loaf, because it made for easier sharing. “I never knew it was going to take off,” Pandy says. “But it was from the late ‘80s that they really became popular.”

How can Pandy be so sure he invented it? He spreads his hands out and shrugs. “Nobody else came forward,” he says.

Today the Gatsby is a staple of Cape Town fast food outlets, particularly on the Cape Flats, but in parts of the CBD as well. While its specific Cape Town incarnation seems unique, many food cultures have some form of hearty, filling sandwich beloved of workers needing substantial food – and often those seeking to soak up alcohol.

Durban is known for its bunny chow (half a loaf of white bread filled with curry). Greece has its gyros, with meat, tomatoes and chips rolled into a pita. The USA gave the world the submarine, with exotic variants like the Louisiana po’boy: a French stick filled with fried shrimp and oysters.

On Urban Dictionary, the adjective ‘Gatsby’ is listed as meaning ‘excessive, extravagant’ in colloquial usage these days. It’s a derivation from the word’s literary roots – the opulent lifestyle of Jay Gatsby – but it might be applied just as well to its Cape Town food referent. Not in terms of its price or, indeed, the quality of its ingredients: ‘mixed-meat’ products like polony or garishly-coloured Viennas often feature. But simply in terms of the sheer quantity of food one is presented with.

Then again, the Gatsby is fundamentally a sharing food, with the middle piece in most demand. “No matter where you buy your Gatsby I know you fighting over who gets the middle piece while you unwrapping it on the bonnet of your car,” one online commentator wrote.

But the fact remains that the Gatsby is huge, greasy and carb-laden. When Paleo-diet advocate Professor Tim Noakes has nightmares, it is probably the Gatsby that appears before him.

And so, this National Nutrition Week, Heleen Meyer and her team accepted the challenge to “overhaul” the traditional Gatsby, turning its dripping excess into a lean, heart-friendly version.  The Gatsby 2.0 exchanged deep-fried chips for oven-baked chips, polony for “baked beans and lean red meat”, the white French loaf for a wholewheat roll.

Photo: Heleen Meyer and her team “overhauling” the traditional Gatsby

On stage at the Waterfront, Pandy was asked to try it. He pronounced it delicious. When asked later if it he would put it on the menu of Super Fisheries, he showed slightly more hesitation. “Well, I don’t know,” he said. “But if people want to eat healthy…”

If people want to eat healthy, many might be tempted to respond, they probably just shouldn’t order a Gatsby in the first place. While the project is a creative and commendable one in a country with a burgeoning obesity problem, trying to turn the Gatsby into a health food seems a little like if Scotland were to announce it was re-purposing the deep-fried Mars Bar as a salad.

Before arriving at the Waterfront on Tuesday, I had never eaten a Gatsby: a shameful admission for someone who has lived in Cape Town for many years. I sampled the healthy Gatsby in its delicate portions and wasn’t particularly sold. It was edible, but a bit dry and unexciting. It struck me overall as something which might not be out of place on a Subway menu, but which you might not hurry to order twice.

What I needed was the real deal. I got in a taxi and asked its driver to take me to Mariam’s in the CBD, a joint which has attained legendary status among Gatsby aficionados. A Twitter poll revealed other celebrated outlets:  the Golden Dish Halaal Take-Aways in Gatesville (slogan: Often Eaten, Always Remembered); Aneesa’s in Wynberg; Cosy Corner, also in Wynberg. Mariam’s won by virtue of proximity.

“You live in Cape Town and you’ve never had a Gatsby?” my taxi driver exclaimed with horror when I explained my mission, turning his head to examine me in case he was driving a Martian. “What have you been doing all this time?”

What indeed. He told me he ate at least a Gatsby a week, and that his preferred spot was the Golden Dish. There, he said, a popular Friday night activity was to pick up a Gatsby and go drag-racing, though he was at pains to stress that he didn’t participate himself.

There was a silence. “I’m lus for a Gatsby now,” he mused.

At Mariam’s, I was served from their seemingly spotless kitchen a half-portion Gatsby which was nonetheless so enormous that I almost swooned when it appeared. I understood when I saw it why the woman at the counter had asked “How many cuts?”, a question which confused me at the time. I panicked under pressure and had opted for the loaf divided into two, but a sixth might have sufficed.

From the crisp white contours of the loaf overflowed a cornucopia of sauce-laden delights: slap chips, steak, onions. To tackle this behemoth with a knife and fork seemed absurd, like an ant trying to topple an elephant, so I took a deep breath and went for it, attempting to dislocate my jaw like a python ingesting an antelope.

Reader, I chowed him. I grazed. I vreeted. I mowed down. There’s no elegant verb for it. I laid waste to that Gatsby, at least for six or seven satisfying bites, until I realized I couldn’t physically go on. Not out of a lack of desire: the spirit was willing; the flesh frightfully weak.

Undoing a jeans button and waddling to the counter, I asked to speak to the proprietor, but the man who came to talk to me asked not to be named. He was, he said, a “humble” man.

The Gatsbys were made to his mother’s recipe, he said. They were popular with an entirely multi-racial crowd: “Coloureds, Africans, whites – all eating with their hands”. It was the quality that kept them coming back, and the fact that it made for an economic lunch option because of its sharing potential.

Western Cape Premier Helen Zille was a fan of Mariam’s, he claimed. On his phone he pulled up a Timeslive article link to prove it: in a 2010 interview, Zille recommended Mariam’s for “the best spicy toasted chicken in Cape Town”. She didn’t mention the Gatsbys.

I explained the concept of the healthy Gatsby, and asked for his thoughts. He looked at me as if I was mad. “Nobody’s worried about health,” he said flatly. “If we give them a health option, they’ll say: Don’t be crazy.” If someone insisted upon it, the kitchen could make them a Gatsby on a wholewheat roll.

He disappeared for some minutes and then returned. “I forgot to say, in November we’re opening a whole health bar,” he said. “Smoothies, wraps, calamari, pasta.”

As I lurched for the door cradling my takeaway, the size of a small turkey, he called to me. “Next time you’re here you must try our salomies.” DM