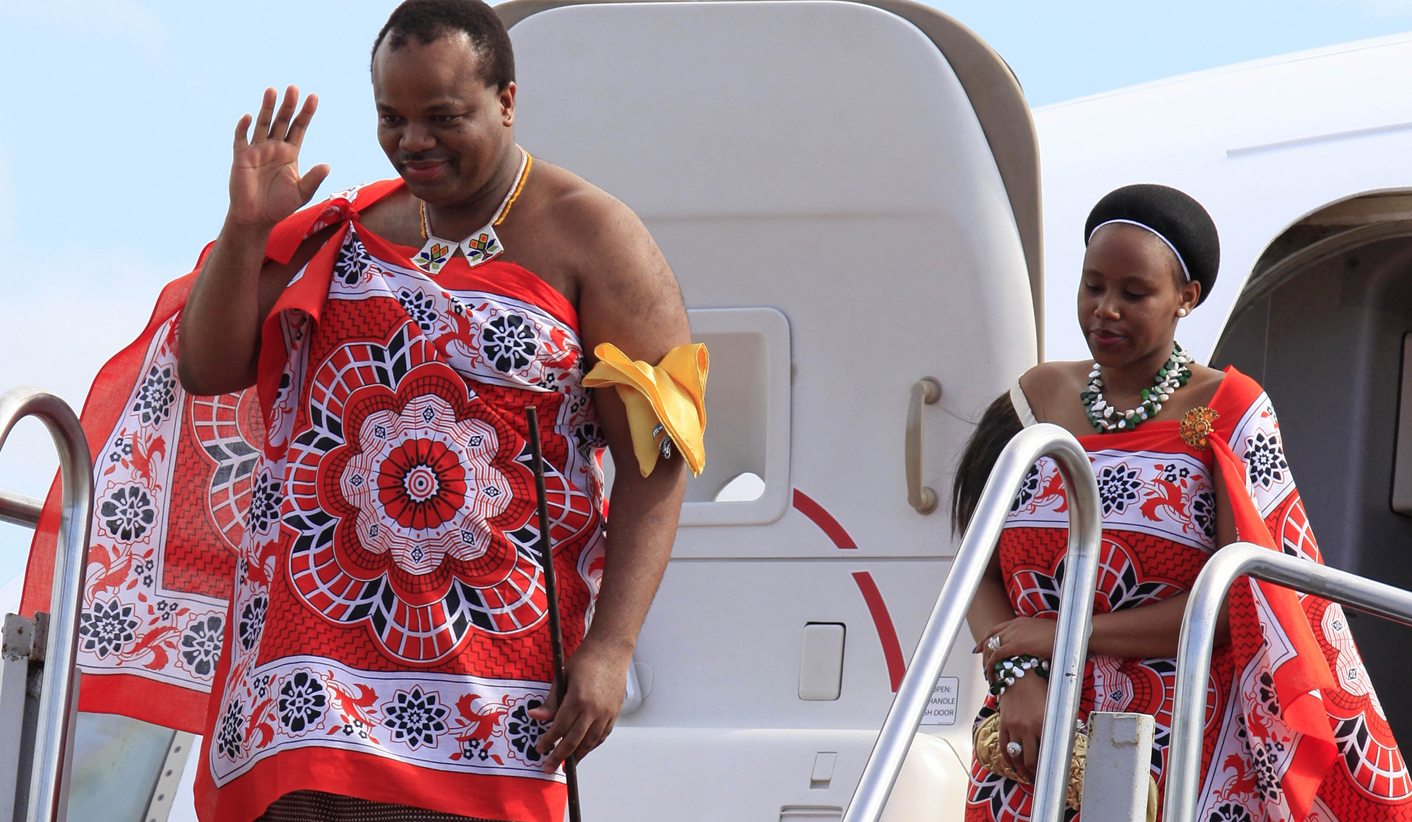 On Saturday, Swazi King Mswati III was at the country’s annual reed dance where he chose an 18-year-old beauty to be his 15th wife. Swaziland police, meanwhile, were arresting Musa Dube, a member of the Communist Party of Swaziland for campaigning to boycott the country’s elections, to be held on Friday. His arrest, on charges of sedition, is another in a long list of arrests as Mswati maintains his grip on his “monarchial democracy”. By GREG NICOLSON.

Their stories differ but they all have something in common. For decades, Swaziland has been ruled under the Tinkhundla system, after a proclamation by Mswati’s father King Sobhuza II. The system, supposed to favour democratic devolution, is criticised as allowing Mswati to rule by decree. Political parties, freedom of association, a free press and the right to choose a government are effectively banned. Pro-democracy formations accuse the police of torture and brutality. A 2012 Institute of Security Studies report called it “organised certainty”. The system heavily favours the elite. Out of a population of 1.2-million, at least 31% is HIV positive and an estimated 70% live in poverty.

These activists want to change that system. On Friday, the country will go to the polls again. The candidates are effectively vetted to support the monarchy. The activists are not only opposing the vote but want a complete political reform.

Communist Party of Swaziland Deputy General Secretary Musa Dube was arrested on Saturday. He was charged for distributing fliers calling for a boycott of the elections; in Swaziland, this is known as “sedition”. His trial has been shifted to the High Court. Earlier this month, police put an end to a Global Inquiry Panel featuring former Cosatu general secretary and South African communications minister Jay Naidoo and South African activist Bishop Paul Verryn who were in Swaziland to hear about violations of workers rights.

Message to the Swazi King: even though the SA government could hardly give a damn, if you detain two very prominent and respected South Africans, the international media won’t take it lightly. If there was any doubt, the latest round of detentions makes Mswati’s idea of a “monarchial democracy” look about as useless as the Apartheid state’s attempt to placate pro-democracy demands with the tricameral parliament.

In August, Mswati woke up in his palace after a night of storms. He had a vision from god: henceforth Swaziland would be a monarchial democracy. His spokesperson described it as a “marriage between the monarch and the ballot box” with elections providing advice and the king ensuring transparency and accountability.

It’s a ruse, and the king agreed, in a way. “No change really. It’s just a name so people can understand,” he told Reuters. “The world really doesn’t understand the Tinkhundla system,” he said in an interview. “But everybody can understand monarchial democracy. It’s an English name. This monarchial democracy is a marriage between the traditional monarchy and the ballot box, all working together under the monarchy.” It seems god now instructs monarchs on semantics, who knew?

Mswati doesn’t see the need for change. Having just added his 15th wife, and with his family living in opulence, why would he? He does see the need to get the public on his side, or at least not on the side of the activists.

Soon, however, he might have to face the music. A recent report from UK think tank Chatham House argued it might be a failed economy rather than political opposition that puts an end to his government. It reads: “Swaziland is on a non-sustainable trajectory, which the King and the government will ignore at their peril. Conditional loans have been avoided because of a Southern African Customs Union (SACU) windfall payment, but such a bailout option is unlikely to be available in the future. Although Swaziland is a lower middle income country, per capita GDP growth is lagging behind that of other [SACU] members, and external assistance has significantly declined as bilateral international donors have shifted their financing strategies to least-developed countries and countries in transition.”

Its economy depends on SACU revenues and Mswati selling his allegiance to the highest bidder. Behind the hefty shares the state receives from the customs union and the politically linked donations, such as the tidy $2-million Taiwan donates each year, there’s little to call an economy.

Activists reacted angrily to the report, which downplayed their importance. The Swaziland Democracy Campaign responded: “If it were not for the courage and determination of countless democracy activists drawn from the trade unions, banned political and faith-based organisations, youth and student movements, there would not even be the sham elections that the royal elite are now offering.

“If not for those outstanding, people-centred activists who have bravely challenged Royal rule by decree, and who, at great personal risk, have organised and mobilised against incredible odds, to expose the wholly corrupt Tinkhundla system, then even worse pillaging of national resources would have taken place. After all, it was the concerted effort of the democracy movement, and especially the Swaziland United Democratic Front (SUDF) and its campaigning wing the Swaziland Democracy Campaign inside the country and many activists from outside that helped prevent the South African bailout from going ahead.”

Both groups are right. The activists, detained by a brutal system, and the economy, deteriorated by greedy leaders, are making Mswati’s rule less tenable. This week’s vote, however, is likely to come and go. With it will come more police crackdowns. The economy won’t benefit and the politics are such a sham that it’s unlikely many will have faith in the vote.

The election will not change Swaziland’s trajectory dramatically. It’s on a path to nowhere. At some point, hopefully sooner but don’t hold your breath, Mswati must make changes – beyond semantics – before he is too broke to support his wives or the jails fill with activists. DM

Photo: King of Swaziland Mswati III and one of his wives disembark a plane after arriving at Katunayake International airport in Colombo August 13, 2012. REUTERS/Stringer