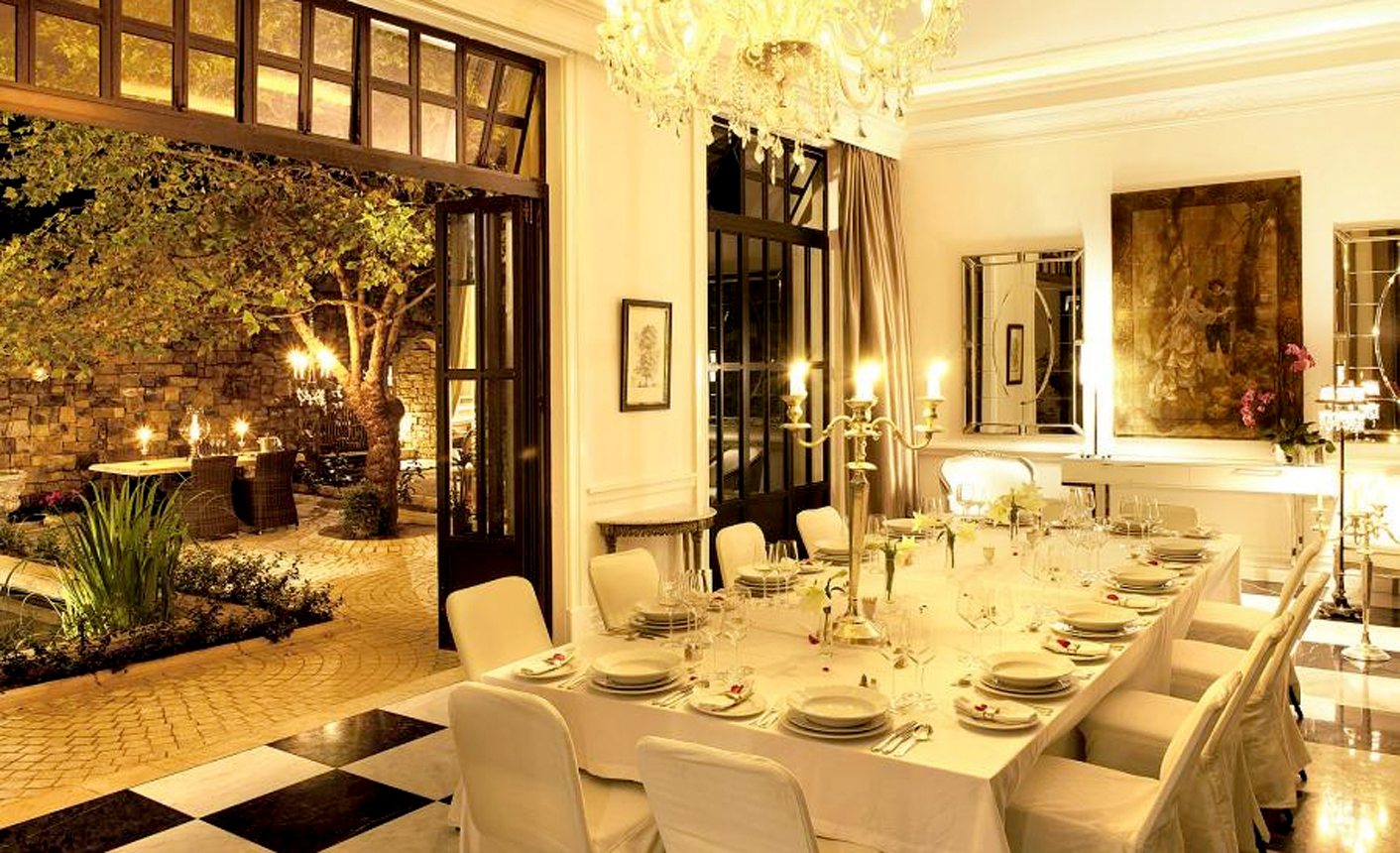 Getting a job, winning that promotion, or attracting new clients often relates more to how you interact with people than how well you can do your job. GREG NICOLSON attends Johannesburg’s new etiquette school, one of only a few in the country, to learn how to build his self-esteem, mingle and discuss his anxieties so that he can get ahead in this world, still so dominated by luxury capitalist customs of western culture.

Saying those three little words to someone important is never easy. At least this is the right venue. Le Chatelat Residence is in the elite Johannesburg suburb of Sandhurst. Its manicured lawns stretch to a pool; a fountain of cherubs sit by the entrance. The last time I said those sacred words was in Kitcheners, a bar of alternatives, drunks and hipsters, over Black Label and boxed wine. Surely Le Chatelat is an improvement. I stretch my arms over my head, assuming Usain Bolt’s victory pose, remember my achievements that day (I was on time) and whisper “I love you” into the mirror.

This is The School of Etiquette. Launched in May, it offers a range of grooming courses. Today I’m at “Outshine the competition: business etiquette”, aimed at developing interpersonal skills so that your character can shine and help you achieve your career aspirations.

Le Chatelat is a hotel that hosts guests and functions looking for luxury. A fire rages next to us as we are seated before the session starts. Paintings and mirrors line the walls under a ceiling of ornate plaster. Crystal balls sit on the coffee table and a carved bust rests on a stand. Fraser Carey, who runs this School of Etiquette session with his daughter Courtney (and who later tells us to build our self-esteem by looking in the mirror and saying “I love you”), sits down, introduces himself and tells a story about rescuing a girl from the ocean. I’m too transfixed by the gold-plated ornaments to pay much attention.

Confronting the common perception of etiquette has been one of the key challenges in starting the new business, says Courtney Carey, who runs our session and went through similar courses in the United States. People assume it’s more of a finishing school about finding the fish knife knowing your cognac (they do run those courses as well).

“I want to teach people to treat each other in a more loving, supportive, non-judgmental way,” Carey says as we begin our training. She wears a black pantsuit and is confident, blond and commands the room with her presence and smile. “Your intellect will get you the interview, but your social skills will get you the job, and this translates to every aspect of your life.” The seven other participants, who include established professionals looking to achieve their ambitions, others sent by their bosses and one student whose dad advised her to attend, nod and concentrate.

The American market is saturated with such courses, says Carey as we sit on the balcony during a break. This course capitalises on two realities. Firstly, communication and social skills are vital to succeed in a professional career, yet are hardly taught at university. Secondly, South Africa’s society is diverse and changing, but the corporate environment is still dominated by the luxury capitalist customs of western culture that forces one to conform or risk being left behind.

A TED Talk on body language plays on the screen. I’m watching, sitting while closing and opening my frame, unsure of what to do. Having my hands on my knees rather than folded on my chest should mean I’m powerful, but I’m tired of trying to sit up straight and stiff so I slouch. I don’t slouch too much. Slouching means I’m weak, maybe I don’t look interested, and so I sit up again. Perhaps just sitting straight for the sake of it means I am closed to new experiences and weak. I consider slouching again but decide against it. My neck hurts. It’s the ultimate sign of timidness if I reach to rub it, I’ve been told. Should I just hold up my hands like Usain Bolt crossing the finish line? That’s the universal sign of winning, we learned.

Understanding body language is one of the key ways to outshine the corporate competition, says Carey. We also learn about eye contact, how to conduct ourselves at events, mingling, building rapport, handshaking and making introductions. The group has identified what it wants to take out of the event and those aims are met. We wanted tips on better corporate behaviour, handling a room, building relationships, confidence and communicating.

These are interpersonal skills, but South African universities are struggling to produce students who can simply do to their jobs in the workplace. Last year, University of the Free State vice chancellor Jonathan Jansen lamented the harm of the “huge gap between what the school or university diploma says, and what graduates can actually do in the real world …  We regularly talk to employers about ‘the graduateness’ of university students; I have not yet heard a positive comment about readiness for work.” A Council on Higher Education study released last month found less than 5% of African and coloured students are succeeding at higher education institutions.

But getting a job, getting a promotion, or attracting clients often has little to do with one’s technical skills. Recent research has shown that employers are often more concerned about communication and likability than the skills you have to do the job.

During another break, after discussing how to build rapport, Fraser Carey explains why the family established The Etiquette School. Le Chatelat hosts fancy events. Fraser Carey saw professionals who didn’t know how to handle themselves in a luxury or business atmosphere. The gap in the market was obvious.

The Carey family is upfront about the kind of etiquette they teach. It’s about knowing and using social norms in a given situation to your best advantage so that your habits, fears or anxieties don’t get in the way of your ambitions. The situations they teach relate to the South African corporate environment.

Sadly, that environment is still dominated by English speakers and western culture, and with globalisation it’s unlikely to change anytime soon. There are a couple of cringe-worthy moments during the course when discussing “African” culture on issues like handshaking and eye contact. It reflects the continued subjugation of local customs and the reported lack of social interaction between people of different backgrounds.

But the environment is open and the participants are free to say what they want. There’s even the perception that the organisers will listen and add suggested improvements to the programme. Essentially, The School of Etiquette allows you to talk about the individual and collective anxieties we confront in the work environment.

In such a stratified society, where we know you can be pushed to the side if you’re young, or black, or not refined, or simply struggle to meet the right people at a networking dinner, talking about those difficulties with others who face the same problems is important. The etiquette session offers a chance to do just that and to take the advice or leave it, just so long as you can afford the price that gets you inside Le Chatelat. DM