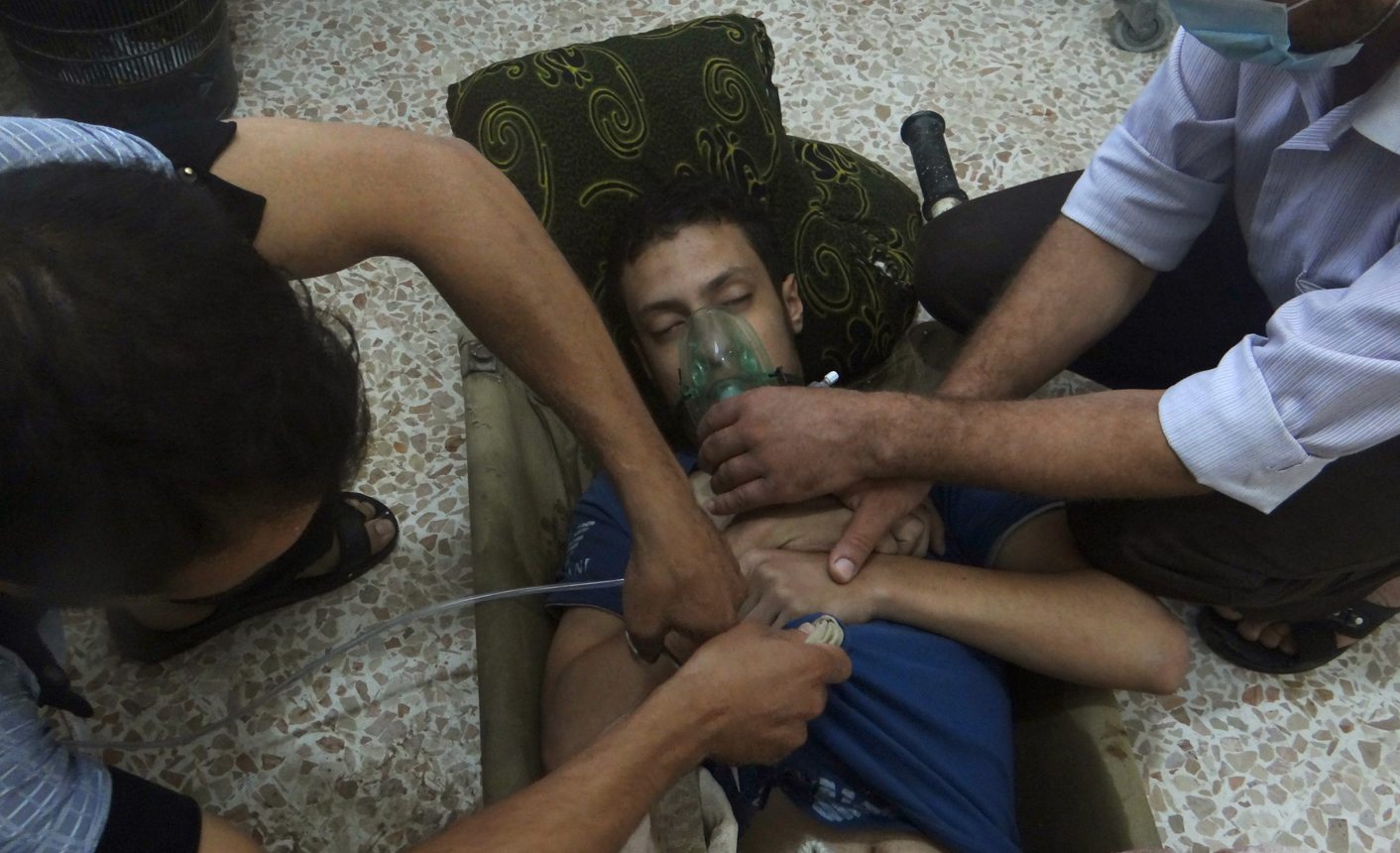 A man, affected by what activists say is nerve gas, breathes through an oxygen mask in the Damascus suburbs of Jesreen August 21, 2013. (Photo: Reuters)

Syria agreed on Sunday to let the United Nations inspect the site of a suspected chemical weapons attack, but a U.S. official said such an offer was "too late to be credible" and Washington was all but certain that the government of President Bashar al-Assad had gassed its own people. By Oliver Holmes.

The U.S. remarks appeared to signal a military response was more likely. A senior senator said he believed President Barack Obama would ask for authorisation to use force when Congress returns from recess next month.

The comments follow forceful remarks from other Western powers, including Britain and France, which also said they believe Assad’s government was behind a massive poison gas attack that killed many hundreds of people last week.

Foreign powers have been searching for a response since the killings in a Damascus suburb which, if confirmed, would be the world’s worst chemical weapons attack in 25 years.

The United Nations said Damascus had agreed to a ceasefire while a U.N. team of experts inspects the site from Monday. Syria confirmed it had agreed to allow the inspections.

The scale of Wednesday’s attack has led to calls for a strong response from the United States, a year after Obama declared the use of chemical weapons to be a “red line” that would draw serious consequences.

Washington was still weighing how to respond but there was very little doubt that the Syrian government had used a chemical weapon against civilians, a senior U.S. official said.

“Based on the reported number of victims, reported symptoms of those who were killed or injured, witness accounts and other facts gathered by open sources, the U.S. intelligence community, and international partners, there is very little doubt at this point that a chemical weapon was used by the Syrian regime against civilians in this incident,” the U.S. official said.

“At this juncture, any belated decision by the regime to grant access to the U.N. team would be considered too late to be credible, including because the evidence available has been significantly corrupted as a result of the regime’s persistent shelling and other intentional actions over the last five days.”

Syria’s information minister said any U.S. military action would “create a ball of fire that will inflame the Middle East”.

He said Damascus had evidence that chemical weapons were used by rebels fighting to topple Assad, not by his government. That argument is given credence by Assad’s ally Russia, but dismissed by Western countries that believe the rebels have no access to poison gas or the big weapons needed to deliver it.

Western leaders have been phoning each other in recent days to discuss a possible coordinated international response.

British Prime Minister David Cameron and German Chancellor Angela Merkel agreed there was little doubt the attack was carried out by the Syrian government and that “such an attack demanded a firm response from the international community,” Cameron’s office said.

“We cannot in the 21st century allow the idea that chemical weapons can be used with impunity,” said British Foreign Secretary William Hague. “We believe it’s very important that there is a strong response and that dictators … know that the use of chemical weapons is to cross a line and that the world will respond when that line is crossed.”

Hollande’s office said: “France is determined that this act does not go unpunished.”

Bob Corker, the ranking Republican on the U.S. Senate Foreign Affairs Committee, said he had spoken to the Obama administration about its plans and believed the president would seek authorisation for intervention in Syria after Congress convenes on Sept. 9.

“I think we will respond in a surgical way and I hope the president, as soon as we get back to Washington, will ask for authorisation from Congress to do something in a very surgical and proportional way,” he told Fox News Sunday.

Since Wednesday, the 20-strong team has been waiting in a hotel in Damascus a few miles from the site of what appears to have been the world’s worst chemical weapons attack since Saddam Hussein’s forces gassed thousands of Iraqi Kurds in 1988.

Their movements must be agreed with the Syrian government, and their inability to reach the site of attacks just a short drive away was symbolic of the failure of global diplomacy to have any real impact during two and a half years of war.

State television showed footage of tanks moving on Sunday into what it said was the eastern Damascus suburb of Jobar, one of the districts where the mass poisoning occurred.

Opposition activists in Damascus said the army was using surface-to-surface missiles and artillery in the area.

“The fact is that much of the evidence could have been destroyed by that artillery bombardment,” said Britain’s Hague.

Obama met his top military and national security advisers on Saturday to debate options. U.S. naval forces have been repositioned in the Mediterranean to give Obama the option of an armed strike.

Assad’s two main allies spoke out in his defence. Iran, echoing Obama’s own language, said Washington should not cross a “red line” by attacking Syria. Russia welcomed the decision to allow the U.N. investigation and said it would be a “tragic mistake” to jump to conclusions over who was to blame.

It is not clear how much impact the U.N. investigation would have on decision-making by Western countries.

In past incidents, the United States, Britain and France obtained what they said was their own proof that Assad used small amounts of chemical arms. But if the U.N. team obtains independent evidence, it could be easier to build a diplomatic case for intervention.

Throughout a war that has killed more than 100,000 people, the United States and its allies have yet to take direct action, despite saying long ago that Assad must be removed from power.

In June, after concluding that Assad’s forces had used a small amount of nerve gas, Obama authorised sending U.S. weapons to Syrian rebels. Those shipments were delayed due to fears that radical Sunni Islamist groups in the opposition could gain further ground in Syria and become a threat to the West.

However, Obama is reluctant for the United States to be drawn into another war in the Muslim world after pulling U.S. forces out of Iraq and preparing to withdraw from Afghanistan.

Senator Jack Reed from Obama’s Democratic Party said any response had to have international military support and Washington could not get into a “general military operation”.

The Syrian opposition says between 500 and well over 1,000 civilians were killed by gas in munitions fired by pro-government forces. The medical charity Medecins Sans Frontieres said three hospitals near Damascus had reported 355 deaths in the space of three hours out of about 3,600 admissions with neurotoxic symptoms.

The head of the al Qaeda-linked Nusra Front rebel group has pledged to target communities from Assad’s Alawite sect with rockets in revenge.

“For every chemical rocket that had fallen on our people in Damascus, one of their villages will, by the will of God, pay for it,” Abu Mohammad al-Golani said in a recording on YouTube. DM

Photo: A man, affected by what activists say is nerve gas, breathes through an oxygen mask in the Damascus suburbs of Jesreen August 21, 2013. Syrian activists accused President Bashar al-Assad’s forces of launching a gas attack that killed nearly 500 people on Wednesday, in what would, if confirmed, be by far the worst reported use of chemical arms in the two-year-old civil war. REUTERS/Ammar Dar