Boks vs. Argentina: Bring it home at hostile Mendoza 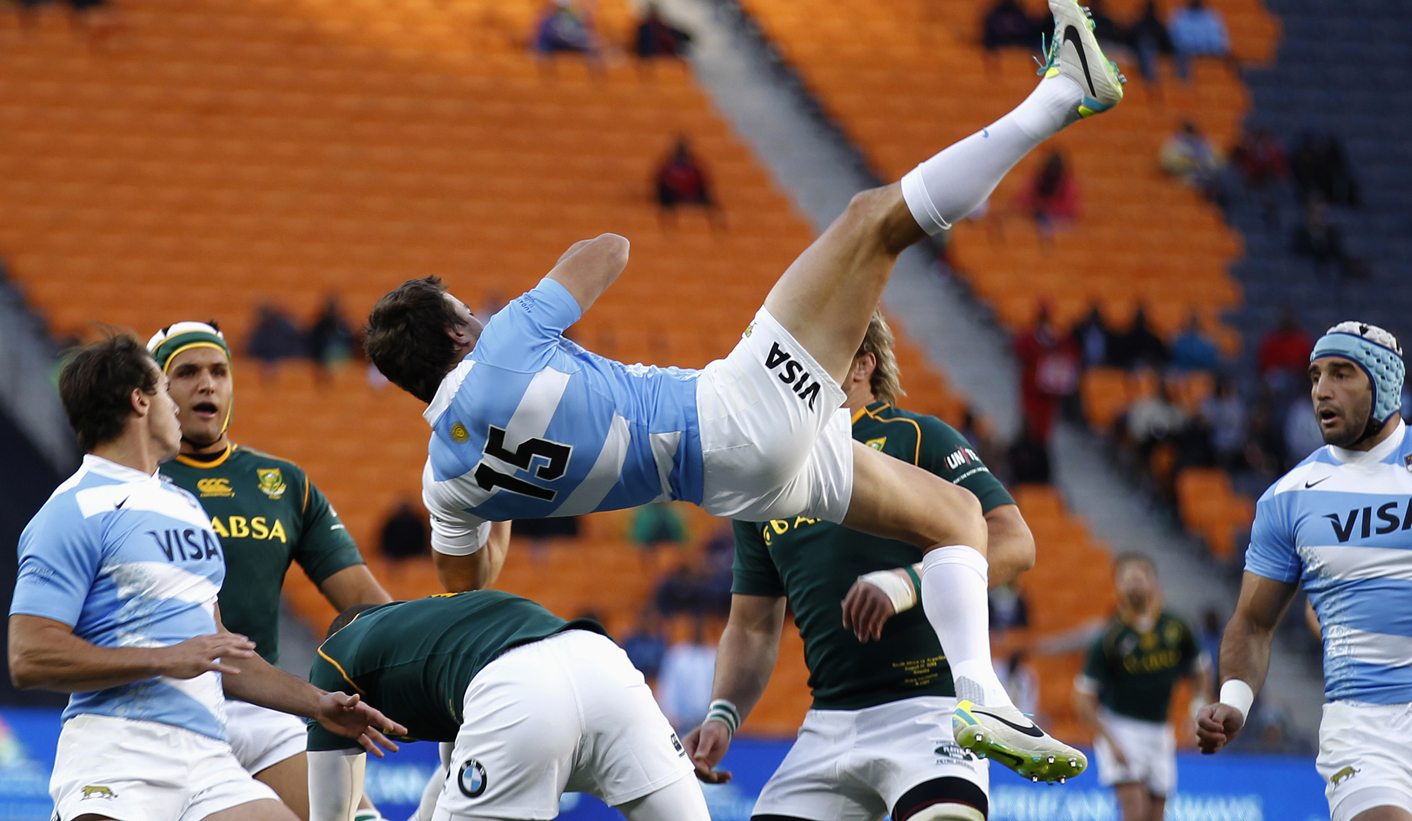 The Springboks touched the heights of greatness in the emotional, inspirational atmosphere of the FNB Stadium last weekend; the challenge will be for them to repeat that sort of performance in the hostile, unfamiliar surrounds of Mendoza in the return fixture against Argentina on Saturday night. By KEN BORLAND.

The 73-13 victory over the Pumas as the country celebrated the Nelson Mandela Sports and Culture Day was the biggest win ever in the Rugby Championship or the Tri-Nations that preceded it, and the Springboks were rightly lauded for the record nine tries they scored in producing some dazzling attacking play.

But the foundation for that win was laid up front by the massive ball-carrying efforts of Eben Etzebeth, Duane Vermeulen and Willem Alberts, and the set-piece excellence of the tight five.

Given the time and space, and the platform to shine, the backline then showed what they are capable of.

It is little surprise that coach Heyneke Meyer has chosen the same starting XV to take on Argentina this weekend, with the only change to the squad being the promotion of Jano Vermaak to reserve scrumhalf in the absence of Fourie du Preez, who will not be part of any of South Africa’s away games, as per the wishes of his Japanese club, Suntory Sungoliath.

The continuity that Meyer has engendered through his selections has allowed the confidence in the side to grow markedly through seven consecutive wins. It is still early days in the Rugby Championship, but at the moment the two sides on an upward trajectory are the Springboks and their arch-rivals, the All Blacks.

But to ensure that they keep tracking the world’s number one side, the South Africans are going to have to bend their backs and put in another big effort in Mendoza.

A year ago, almost to the day, that hunger was missing as South Africa scraped a fortuitous draw against Argentina at the same venue.

As the actress may well have said to the bishop, “it’s what you put in that counts”, and the Springboks will have to put in an even bigger effort amongst the forwards to soften the Pumas in front of their most passionate supporters.

The Springboks have obviously adjusted better than expected to the requirements of the new scrum laws but the return of the bajada, which seems tailor-made to the new engagement sequence, cannot be far off.

The loss of the injured Patricio Albacete will place the Pumas lineout under even more pressure, following the dominance of Juandre Kruger and Etzebeth last weekend, and the effectiveness of the rolling maul – there seemed to be a total lack of a defensive plan against it from Argentina – means that set-piece should once again provide a great attacking platform for the Springboks.

The improvement shown at the breakdown will be under even more scrutiny this weekend as the Springboks will have to adapt to the vagaries of referee Steve Walsh, who will have a vocal crowd on his back in the most intimate of venues. The hostile atmosphere in the sunken stadium is epitomised by its name – the Estadio Malvinas Argentinas – which literally means Argentina’s Falklands Islands Stadium, a defiant show of the country’s claim on that territory.

If the Springboks do get the same sort of front-foot ball they enjoyed last weekend, then they can be expected to canter to victory once again. The arrival of Willie le Roux and JJ Engelbrecht, and the continued spark shown by Bryan Habana and Jean de Villiers, has allowed the Springboks to bury suggestions they are dour and one-dimensional on attack.

And one of the most encouraging features of the opening round win was the crisp, snappy service provided by scrumhalf Ruan Pienaar – Meyer said it was the best game the Ulster-based veteran had produced under his coaching.

Adding Le Roux to the mix at fullback has certainly brought an extra dimension with the Cheetahs star’s vision and ability to put others in space reminiscent of the great Andre Joubert.

The form of Morne Steyn at flyhalf has also been superb in all departments all year.

The only player who didn’t shine last weekend was wing Bjorn Basson, although it’s fair to say the run of play didn’t go his way. The Bulls player will need to make himself more involved, however, if the temptation to move Le Roux to wing and play Pat Lambie at fullback is not to take seed in Meyer’s mind.

Lambie came off the bench last weekend and set up the seventh try with a superb break, epitomising the tremendous impact that the bench had. Bismarck du Plessis, Gurthro Steenkamp, Coenie Oosthuizen, Flip van der Merwe, Siya Kolisi, Vermaak, Lambie and Jan Serfontein could all easily distinguish themselves in the starting line-up and the softening-up process the Springboks employ – their subdue and penetrate style – is hugely boosted by having such a powerful bench.

The Springboks have the ideal chance on Saturday to make up for the dismal showing on the previous trip to Argentina. The confidence is there, the game plan is in place; all that’s needed now is the hunger to quell what will be a fiery Pumas response to the humiliation they suffered at the FNB Stadium. DM

Photo: Argentina’s Juan Martin Hernandez (C) takes a dive during the Rugby Championship test match against South Africa at the soccer city stadium in Soweto, August 17, 2013. South Africa is hosting back-to-back rugby and soccer internationals in the same stadium on Saturday in tribute to Nelson Mandela, and marking the start of a campaign called Unite4Mandela. South Africa’s soccer team, Bafana Bafana, play a friendly against Burkina Faso at Soccer City, which hosted the 2010 World Cup final, followed by the Rugby Championship test between the Springboks and Argentina’s Pumas. REUTERS/Siphiwe Sibeko