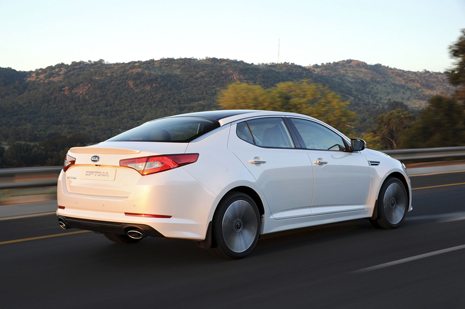 Big sedans used to be the norm. But in the 21st Century, factors such as price, economy and eco concerns have made them increasingly unfashionable. Besides, those that need the space tend to opt for MPVs or SUVs instead. The Kia Optima may be a spacious sedan, but it also has strong visual appeal, efficiency and value on its side. By DEON SCHOEMAN.

My, my – what a long way the Korean car brands have come. Two decades ago, Korean cars were typically small and cheap. They also didn’t have much of a track record, and their use of old and borrowed technology meant they were always a couple of steps behind the cutting edge.

As for styling – well, indifferent would be the kindest way to describe some of those early Korean examples.

But those who believed that the Korean car invasion wouldn’t last have had to eat their words, garnished with a healthy helping of kimchi. From the start, the Korean marques focussed on affordability, value – and customer care.

Buyers of even the most basic of models were made to feel special, and Hyundai, for one, offered weekend servicing when all the so-called big brands kept their workshop doors firmly shut. People started to take notice.

Built on those foundations of value, and a focus on customer service, the Koreans have since become an automotive force to be reckoned with. There’s nothing shoddy or second-rate about modern-day Korean cars – they’ve become desirable, with technology and execution to match.

Which brings me to the Kia Optima. We all know that big sedans have lost some of their shine, mainly because consumers generally look for cars that are more affordable to buy, and are cheaper to run.

But there’s also a status issue here: local motorists would rather be seen in a smaller car from a premium brand, than a larger model bearing a mainstream nameplate. That trend has been responsible for the rise of the Audi A4/BMW 3-Series/Mercedes-Benz C-class segment, while once-popular medium sedans like the Toyota Camry and Ford Mondeo have disappeared.

Even existing players in this segment – think VW Passat, Honda Accord, Mazda6 – aren’t exactly setting the sales charts alight. Why then would a car like the Kia Optima, which fits neatly into the medium sedan category, have any chance of success?

Let’s start with the styling: after all, for many buyers, it’s the first impression that matters most.

The distinctive, markedly Eurocentric design language created by German design guru Peter Schreyer is very much in evidence in a shape that’s cleanly sculpted and eye-catching.

Most importantly, the design is completely original – something that some Korean marques still struggle with. The Optima doesn’t attempt to echo any other styling influences: it’s confidently Kia.

The silhouette places the emphasis on smooth, wind-cheating aerodynamics, and managed to understate the sizeable proportions of the car. The low roofline, narrow glass areas and wedged waistline add an unexpectedly sporty demeanour, while those big, eye-caching wheels suggest a certain dynamic appeal.

Part of the Optima’s attraction is that it doesn’t look as ungainly as its substantial proportions might suggest. At 4.85m long and 1.84m wide, this is a big sedan. But the low roofline and flowing lines underplay the four-door’s bulk. Bottom line? It turns heads.

As important as styling is, the interior execution matters more: after all, it’s where motorists actually experience the car they’ve invested in. And because it’s such a tactile space, any shortcomings are all too clearly revealed.

The first impression of the Optima’s cabin is one of space. This is a roomy interior, even by D-segment standards. There’s stretch-out space front and rear, and the 505-litre boot is equally generous.

It feels big and luxurious – and yes, the list of standard equipment is extensive, covering everything from the two-tone cloth and leather upholstery and the multifunction steering wheel to keyless entry, a reverse camera, parking assistance, and a multi-speaker Infinity sound system.

That steering wheel is perhaps the only real bone of contention – not because of its shape or size, but because of the plethora of controls it houses: sound system buttons, cruise control switchgear, trip meter settings, and hands-free telephony controls … And let’s not forget the gear shift paddles on the steering column.

Admittedly, the layout is pretty much intuitive, and one soon becomes accustomed to where everything is, but sometimes, I yearn for a simpler era, when a steering wheel did nothing else except turn the front wheels.

Kia has worked hard to create a premium ambience, and it generally succeeds. The finishes and surfaces look and feel upmarket, and the yards of obviously fake wood panelling that used to decorate earlier luxury Kias has all but disappeared, except for dark-grained surfaces on the interior door panels.

The Optima has been around since 2012, but the so-called GDI engine under the bonnet is brand new. It’s still a four-cylinder mill, and it still has a 2,4-litre capacity. But vitally, it now features direct petrol injection, which is more precise, and allows higher injection pressures.

Also new is the variable valve timing system, which is now applicable to both the inlet and exhaust valves. The result of these changes should be improved efficiency, and thus more power, combined with reduced fuel consumption.

The factory output figures suggest that the new engine delivers on its power promise: maximum muscle increases by 16kW to 148kW, while torque improves by 19Nm to 250Nm.

Considering the sheer bulk of the Optima, the quoted kerb weight of 1,600 kg is reasonably trim. It allows the Optima to make the most of the power on offer, and so acceleration is satisfyingly brisk.

In fact, the combination of short-ish ratios for the first three gears, and a throttle response best described as razor sharp, creates the impression of a car that is quicker than the figures suggest. But you do need to pile on the revs: the torque peak only arrives on the wrong side of 4,000rpm, so that frequent use of the gearbox is must.

The transmission in question is a six-speed automatic, and the tragedy is that most Optima drivers are likely to stick to the default full-auto mode. The gearbox is fairly smooth, and reasonably responsive, but the driving experience becomes a lot more engaging once you switch to manual model, and use the shift paddles to swap gears.

Even then, don’t expect the Optima to burn rubber, or to challenge the hot hatch brigade. At 9.5sec for the 0-100km/h sprint, progress is swift, rather than outright sporty, while the 210km/h top speed is all but academic on our increasingly crowded roads.

Ride quality is good, if not quite as refined as the rest of the car’s execution suggests. Finding just the right compromise between comfort and tautness has eluded the Optima’s chassis engineers, and the result is a ride that feels smooth, but becomes slightly lumpy poorer, country-road surfaces.

The extensive safety kit not only includes six airbags and ABS brakes, but hill start assistance and an overzealous stability control system that will all but shut down the engine at the first sign of wheelspin – which can be quite disconcerting.

The Kia Optima is a fine car, and the new GDI direct-injection makes it an even better buy. It looks good, feels posh and has ample get-up-and-go, too. Even the pricing is keen.

In fact, the Optima makes a compelling argument in favour of D-segment sedans, rather than those more popular compact premium models. Even so, status-conscious South Africans won’t be as easily persuaded to swap their fancy steeds for the Optima’s undeniable attributes. More’s the pity. DM