Ashes, day one: Siddle sizzles, everything else fizzles 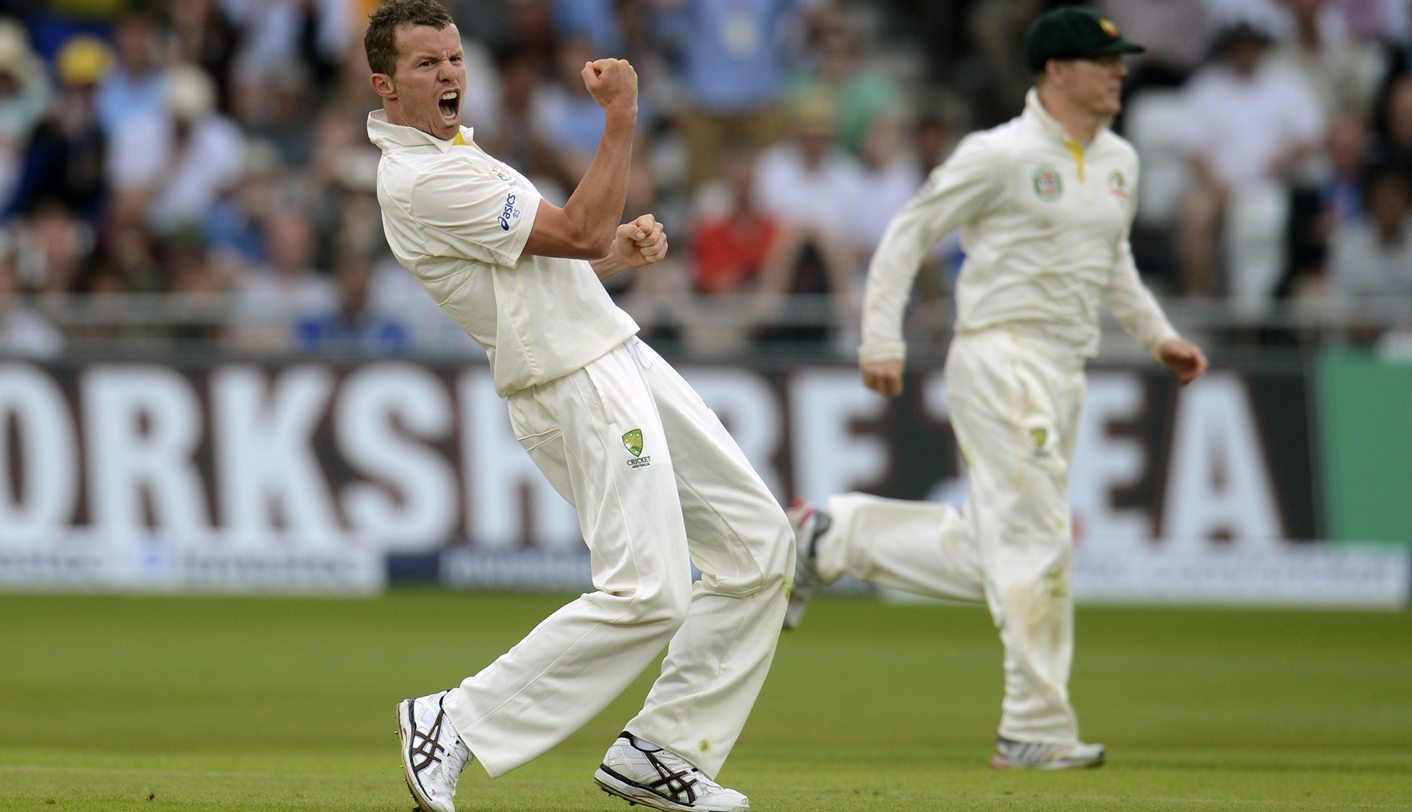 Bad cricket ruled the roost on the first day at Trent Bridge with England and Australia going head-to-head for the honour of who could produce the worst shots. Australia edged the hosts, just. Luckily for all those involved, there are four more days left to find alternative ways to entertain the world. By ANTOINETTE MULLER.

It was meant to be a walk in the park for England. When the tourists won the toss and elected to bat on the first day of the first Ashes Test of Trent Bridge, nobody would have imagined that they’d be bowling by the end of it. Nor would they have thought that they’d almost be batting again, too.

England were taken out for 215 in their first innings, with Peter Siddle bagging a five-for. By the close of play, Australia were 75-4, it was a frenetic day that was dominated by poor cricket rather than sticking to basics. That doesn’t mean things weren’t entertaining. While the state of Test cricket might be questioned if this is the kind of quality dished up by number three and four ranked sides, the first day at least kept people on the edge of their seats.

From the moment England’s openers walked out to the middle, the pressure was on and the expectations were high. With Alastair Cook and Joe Root facing up to a rather rookie Aussie attack, the stage was set for the pair to pile on the runs for the opening partnership. A comical start by the visitors, with James Pattinson starting with a wide, but the joke pendulum continued to swing. It was soon on England and ended right back with Australia.

Cook’s record at Trent Bridge was questionable already, having not managed to get a half-ton there in all of the seven Tests he played at the venue.

The skipper’s loose drive was edged through to Brad Haddin off Pattinson and soon the downfall began.

Peter Siddle, who had a poor first two overs, changed ends and accounted for Joe Root 30 (64), Kevin Pietersen 14 (23) and Jonathan Trott 48 (80) as England were soon reduced to 124-4. While Siddle was adequate in the way he used the crease and adjusted his attack, there wasn’t anything really remarkable about his bowling. Cunning, yes, but not so cunning that it should rattle the third-best Test team in the world quite so easily.

There was still hope for England, though. Ian Bell, Jonny Bairstow and Matthew Prior were all to come. Bell was a victim of one of the few good balls of the day. Returning to the attack, Siddle angled the ball away from Bell who went wafting after it and edged it through to the slips. Prior became the former woodcutter’s fifth victim, but it came from a poor delivery. Prior had only himself to blame as he went cutting after a short and wide delivery, despite seeing a man at point as clear as daylight.

The collapse was well and truly on. Mitchell Starc aimed a ball just a touch shorter of yorker length at Bairstow’s stumps. The Yorkshireman failed to use the face of his bat, though, and his stumps were rattled.

England went from 178-5 to 215 all out and despite their top six all reaching double figures, nobody managed 50. That has happened three times in the past 18 months. The total looked dismal and the crowd at Trent Bridge had gone into a lull faster than you can say: Sheila.

That was soon to change. Shane Watson and Chris Rogers must have walked out to the middle feeling rather confident. There was nothing wrong with the pitch and despite there being some swing around, doing the basics would have ensured Australia ended the first day in good position. But nerves can do funny things to players and Watson was the first to fall. Despite getting off to a brisk start with three boundaries in quick succession, the opener drove at a full delivery and was caught in the slips. Finn, opening the bowling due to an injury to Stuart Broad, struck again off his very next delivery. Next man out Ed Cowan forgot how to keep cool under pressure and chased another wide ball first up.

Reeling at 19-2, Australia looked as poor as everyone had made them out to be. A little bit of James Anderson magic soon earned the hosts the prized scalp of Michael Clarke and at 22-3, things looked set for a three-day Test. By close of play, Australia were on the back foot at 75-4, with Steve Smith and under-fire Phil Hughes in the middle. The pair survived and with sunshine expected on Thursday, both face a mammoth test.

Australia dug themselves into a hole and then they kept on digging. The first day’s play certainly didn’t live up to expectations in terms of quality, but it certainly did in terms of entertainment. Australia have two options: fight or flight.

They had those two positions since the start of play and their brains seemingly took the latter option. It is not unthinkable that it could change, but if day one is anything to go by, it seems rather improbable. DM

Day one close of play summary: