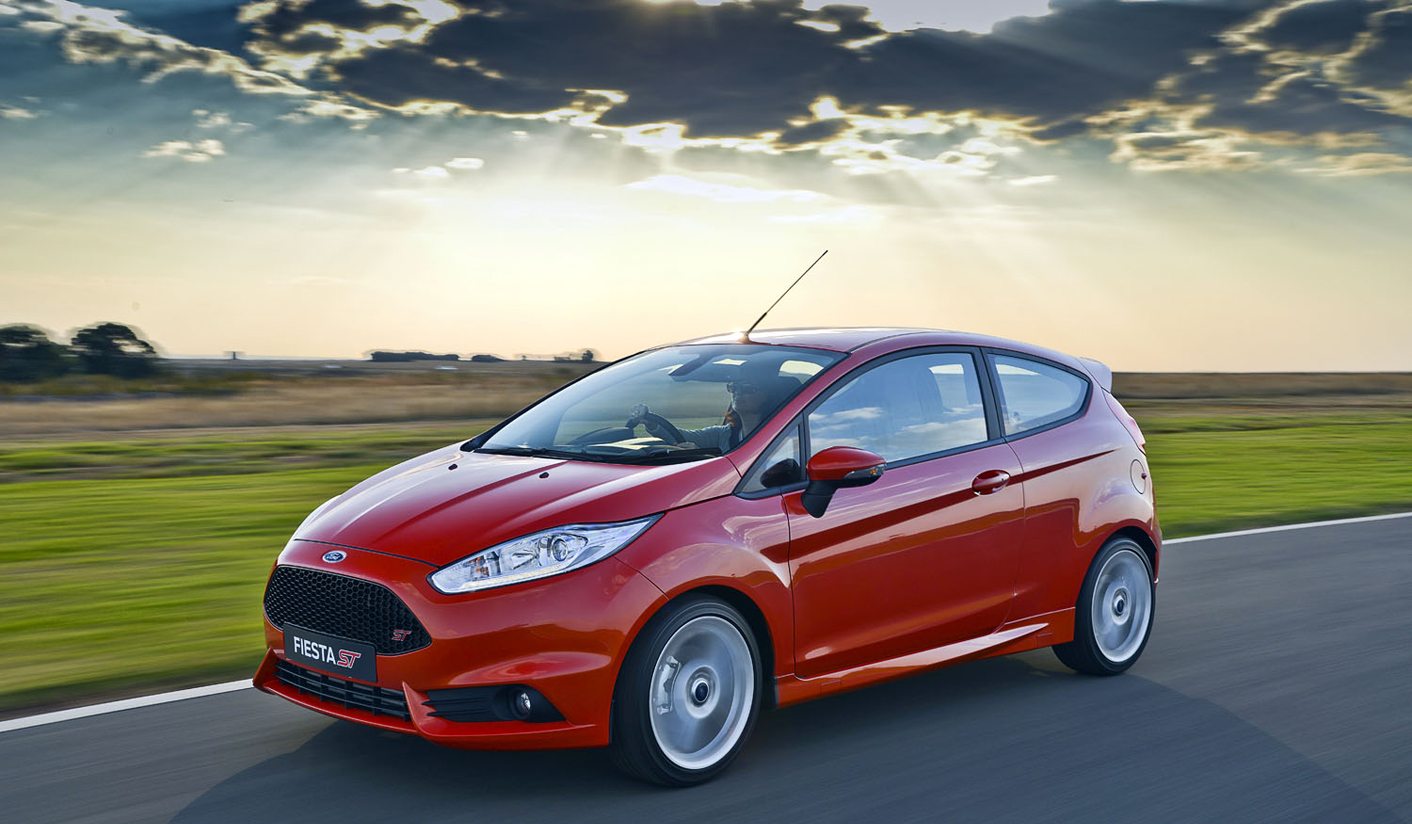 The race for pocket rocket supremacy is hotting up. Already in the starting blocks are established protagonists such as the VW Polo GTi and Opel’s Corsa OPC. Waiting in the wings are the Peugeot 208 GTi and the Renault Clio RS – both due for local launch soon. But already on our roads is Ford’s feisty contender for pocket rocket stardom: the Fiesta ST. DEON SCHOEMAN drives it.

Ford and motorsport have been synonymous for almost as long as the brand has been around.

I can’t really imagine one of Henry Ford’s original Model Ts tearing up a track, but it’s true that the Blue Oval has an extensive and illustrious motorsport heritage. It involves almost every facet of the sport: from Formula 1 to rallying, from endurance events to cross-country racing.

That heritage is also at the core of the brand’s current performance models, the Focus ST – and now, the much-anticipated Fiesta ST. This is the second-generation Fiesta to wear the ST badge, and it’s been a long time coming.

At first, Ford was adamant that there would be no ST-badged performance version of the latest Fiesta. But the popularity of the original, and the fact that the Fiesta became the Blue Oval’s weapon of choice in the World Rally Championship, always seemed to suggest otherwise.

And so, it came as no surprise that the ST badge has finally found its way onto the feisty hatchback’s rump. The only question is why it took Ford so long.

The ST has arrived just in time to square up for an epic battle – the tooth-and-nail fight for supremacy in the burgeoning pocket rocket category. Here, a new generation of lithe and lean machines are contesting the high octane-soaked turf once the domain of Golf GTIs, Focus STs and Mégane RS.

As iconic as those nameplates are, their move to more upmarket, more sophisticated territory has left the field wide open for younger, hungrier, fast-and-furious contenders. And the ST’s mix of athletic looks and dynamic promise suggest it may be a front-runner.

In the looks department, the little Ford reflects the most recent updates to the overall Fiesta range. That means it gets burdened with that awful, gaping grille – a vast aperture that is more guppy than yuppie. At least the gloss-black honeycomb effect unique to the ST provides a measure of visual relief.

That aside, this hot Fiesta is compact and handsome – especially since it employs the three-door shape. The ST treatment adds a full body kit, bigger wheels and a lower, angrier stance to the package. It’s the kind of car that looks fast, even when standing still.

It’s easy to forget that the Fiesta is a lot smaller than a Focus or a Golf. The proportions are just right, with a sense of cohesion and alacrity created by the wheels planted at each corner, the steep rake of the windscreen, the deep front airdam, and the way the roofline extends into a substantial spoiler.

The unexpected sense of generous scale continues in a cabin that, while certainly not cavernous, doesn’t feel cramped – and that despite the presence of a pair of pukka, heavily bolstered Recaro bucket seats.

They’re the kind of seats that feel almost intrusive at first, but keep you so resolutely supported that they combine confidence with comfort, even when hammering the Ford through the twisties.

The Recaros also assist in creating a driving position that feels just right: the thick-rimmed steering wheel, directly ahead, framing clearly calibrated instrument dials, while the gearshift lever is exactly where your left hand expects to find it. Even the alloy pedals are nicely spaced for heel-and-toe downshifts.

And then there is the Ford MyKey system – a programmable key that allows certain parameters to be pre-set. Those parameters include vehicle speed and sound system volume. The key can also prevent the user from switching off the stability control system.

But the cabin also has its shortcomings. Access to the rear is compromised by those very seats I like so much, even though they slide all the way forward. They’re just bulky. Rear accommodation is adequate, at best – and that’s nothing unusual in this sector, either.

However, there’s no reason why the switchgear array that’s meant to control the integrated, Sony-supplied infotainment system, has to be so messy and obtuse. Quite frankly, it’s an ergonomic nightmare.

Lift the bonnet at the business end of the Fiesta, and you’ll find a 1,6-litre four-cylinder mill with al the high-tech trimmings: variable inlet and exhaust valve timing, electronically controlled direct fuel injection – and the all-important turbocharger.

It’s that turbocharger that encourages the small-capacity engine to deliver big-capacity oomph. At 134 kW, the ST’s max power isn’t class-leading, but it’s certainly generous, as is the 240 Nm of torque. The gearbox is a tried-and-trusted six-speed manual, with the kind of slick, quick shift action that makes cog swaps a pleasure.

The big question is if the urge on offer is enough to give the Fiesta a fighting chance for the top spot in the pocket rocket battle. And unfortunately, there’s no easy answer.

Both the Peugeot 208 GTi (due for local launch only a few days from now) and the new Renault Clio RS have a lot more muscle. But the Clio will be offered with a dual-clutch, paddle shift gearbox only. And the 208 GTi has been accused of being too polished to be involving.

What I can tell you is that the Fiesta is a sharp little beast. The steering may be electrically assisted, but once you start carving your way through a mountain pass with some momentum, there’s good feedback and precision on offer.

There’s an intensity, a purposefulness to the way the ST goes about its pocket rocket business that adds a welcome edge, a keenness, to the driving experience. The boosted engine spins into the rev limiter all too easily, and it pulls strongly across the entire rev band.

For some, the suspension set-up will be too taut: stiffer springs, recalibrated dampers and thicker anti-roll bars mean that the ST’s passage is unequivocally communicated.

The chassis always remains communicative, while clever front-axle torque vectoring means that this Fiesta puts the power down without the vagaries of understeer, while benefiting from exceptional grip.

Just as well, because the ST is an eager little monster. It completes the benchmark 0-100 km/h sprint in under seven seconds, while top speed is a useful (if highly illegal) 220km/h.

While it may feel just a little too stiff in the ride department, it’s also true that the Fiesta ST’s primary target market wants to experience ever motoring moment in all its Technicolor glory. The ST is only too happy to comply – but over big dumps and through sharp dips, that may lead to temporary sensory overload.

It’s easy to understand why the Fiesta ST has been so eagerly awaited. It’s a much more focused car than its predecessor, with a strong emphasis on chassis dynamics and an unashamedly sporty personality.

It’s also more sophisticated, with a long list of standard convenience and safety features. And in that context, the pricing is attractive, too. Will that be enough to fend off the onslaught of the Peugeot 208 GTI, the new-gen Renault Clio RS, or even the Mini Hatch Cooper S?

The jury is out until we’ve driven all those key contenders back to back. But put it this way: the Fiesta ST has the spunk, the intent and the breadth of talent to tackle any challenge. DM