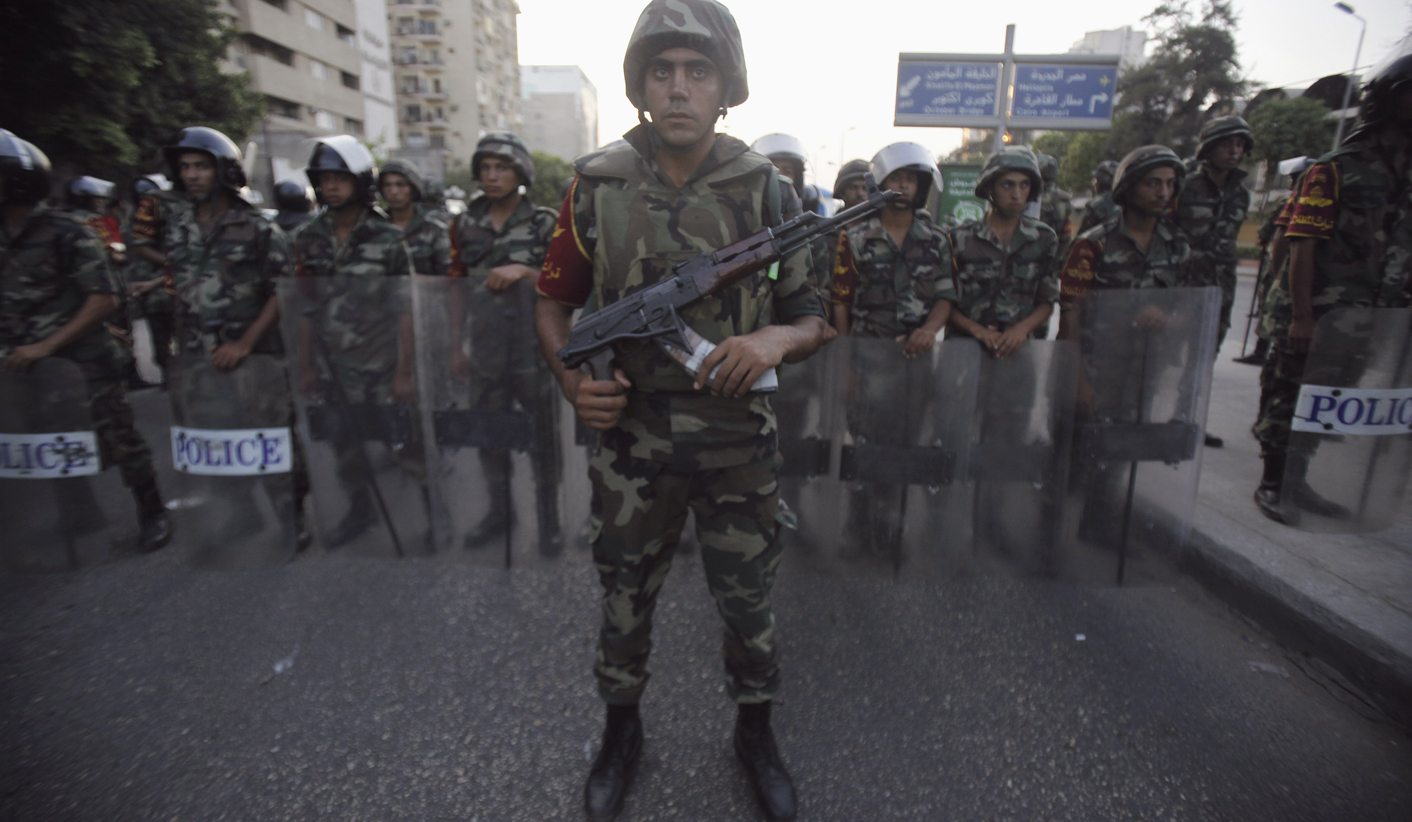 The head of Egypt's armed forces issued a declaration on Wednesday suspending the constitution and appointing the head of the constitutional court as interim head of state. In a televised broadcast, flanked by military leaders, religious authorities and political figures, General Abdel Fattah al-Sisi effectively declared the removal of elected Islamist President Mohamed Mursi.

Sisi called for presidential and parliamentary elections, a panel to review the constitution and a national reconciliation committee that would include youth movements. He said the roadmap had been agreed by a range of political groups.

Earlier, Egypt’s army deployed tanks and troops close to the presidential palace in Cairo on Wednesday after a military deadline for Islamist President Mohamed Mursi to yield to street protests passed without any agreement.

The state news agency MENA said they would make a joint announcement of a roadmap for a new transitional period and new elections two years after the overthrow of autocratic ex-president Hosni Mubarak in a popular uprising.

The Arab world’s most populous nation has been in turmoil since the fall of Mubarak as Arab Spring uprisings took hold in early 2011, arousing concern among allies in the West and in Israel, with which Egypt has a 1979 peace treaty.

The elected Muslim Brotherhood president, in office for just a year, remained out of sight in a Republican Guard barracks surrounded by barbed wire, barriers and troops, but military sources denied media reports that he was under arrest.

“For the sake of Egypt and for historical accuracy, let’s call what is happening by its real name: military coup,” Mursi’s national security adviser Essam El-Haddad said in a statement, warning of “considerable bloodshed” to come.

Another presidential aide, Yasser Haddara, said it was unclear whether Mursi was free to return to the palace where he spent the previous night. His message to supporters was to resist the “military coup” peacefully and not use violence against troops, police or other Egyptians.

Military chiefs, vowing to restore order in a country racked by protests over Mursi’s Islamist policies, earlier issued a call to battle in a statement headlined “The Final Hours”. They said they were willing to shed blood against “terrorists and fools” after Mursi refused to give up his elected office.

Armoured vehicles took up position outside the state broadcasting headquarters on the Nile River bank, where soldiers patrolled the corridors and non-essential staff were sent home.

In a show of force, several hundred soldiers with armoured vehicles staged a parade near the presidential palace, and security sources said Mursi and the entire senior leadership of his Muslim Brotherhood were banned from leaving the country.

Security sources told Reuters the authorities had sent a list of at least 40 leading members of the Brotherhood to airport police.

In a last-ditch statement a few minutes before the deadline, Mursi’s office said a coalition government could be part of a solution to overcome the political crisis. But opposition parties refused to negotiate with him and met instead with the commander of the armed forces.

As the ultimatum expired, hundreds of thousands of anti-Mursi protesters in Tahrir Square in central Cairo let off fireworks, cheered and waved Egyptian flags in celebration.

There was no immediate comment from the armed forces, and Egyptian blogger Su Zee tweeted: “And in typical Egyptian fashion, #egypt is late for its own coup.”

The Brotherhood’s Egypt25 television station continued to broadcast live coverage of a rally of tens of thousands of Mursi supporters, even as the army moved tanks into position to prevent them from marching on the presidential palace or the Republican Guard barracks.

U.S. oil prices rose to a 14-month high above $100 a barrel partly on fears that unrest in Egypt could destabilise the Middle East and lead to supply disruption.

The massive protests showed that the Brotherhood had not only alienated liberals and secularists by seeking to entrench Islamic rule, notably in a new constitution, but had also angered millions of Egyptians with economic mismanagement.

Tourism and investment have dried up, inflation is rampant and fuel supplies are running short, with power cuts lengthening in the summer heat and motorists spending hours fuelling cars.

In what may have been his last official statement, Mursi’s spokesman said it was better that he die in defence of democracy than be blamed by history.

“It is better for a president, who would otherwise be returning Egypt to the days of dictatorship, from which God and the will of the people has saved us, to die standing like a tree,” spokesman Ayman Ali said, “Rather than be condemned by history and future generations for throwing away the hopes of Egyptians for establishing a democratic life.”

Liberal opponents said a rambling late-night television address by Mursi showed he had “lost his mind”.

The official spokesman of the Muslim Brotherhood said supporters were willing to become martyrs to defend Mursi.

“There is only one thing we can do: we will stand in between the tanks and the president,” Gehad El-Haddad told Reuters at the movement’s protest encampment in a Cairo suburb that houses many military installations and is near the presidential palace.

Yet despite Islamist talk of martyrdom and warnings of civil war, the dominant mood in Cairo streets was one of elation rather than foreboding.

State media said they would make a joint announcement of a new political roadmap, with a short transition period to be followed by presidential and parliamentary elections.

The Brotherhood’s political arm, the Freedom and Justice Party, refused an invitation to meet Sisi, saying it only recognised the elected president.

Military and political sources were at great pains to deny that the army intervention amounted to a coup. Western diplomats said the international community was bound to condemn the first toppling of a democratically elected president since the Arab Spring uprisings began and to face calls to impose sanctions.

The U.S. State Department, in comments made after the military ultimatum expired, said the United States was “very concerned” about the situation in Egypt but could not confirm that a military coup was under way.

As if Mursi were still in charge, it said he must do more to be responsive to the concerns of the Egyptian people.

The state-run Al-Ahram newspaper said Mursi was expected to either step down or be removed from office and the army would set up a three-member presidential council to be chaired by the head of the Supreme Constitutional Court.

At least 16 people, mostly supporters of the president, were killed and about 200 wounded when gunmen opened fire overnight on pro-Mursi demonstrators at Cairo University.

The Brotherhood accused police of the shooting. The Interior Ministry said it was investigating and the governor of Giza province, where the clash occurred, submitted his resignation.

In central Cairo, many stores were shuttered and traffic unusually light. The stock market index recovered losses to close just 0.3 percent lower on hopes of a rapid solution to the crisis.

The Egyptian pound weakened against the dollar at a currency auction, and banks closed early, before the army deadline.

For the first time in many months, uniformed police were back patrolling the streets, and the Interior Ministry said in a statement it would “confront all forms of violence”.

“I could tell that the police are back with their full power on the streets like the old days before the Jan. 25 revolution,” said Amir Aly, 25, a protester outside the presidential palace.

Military sources told Reuters the army had drafted a plan to sideline Mursi, suspend the constitution and dissolve the Islamist-dominated upper house of parliament.

Photo: Army soldiers stand guard in front of protesters who are against Egyptian President Mohamed Mursi, near the Republican Guard headquarters in Cairo July 3, 2013. A meeting between the head of the Egyptian armed forces, liberal opposition leaders and senior Muslim and Christian clerics, has ended and a statement will be issued within the hour, the armed forces said in a statement on Facebook on Wednesday. REUTERS/Amr Abdallah Dalsh