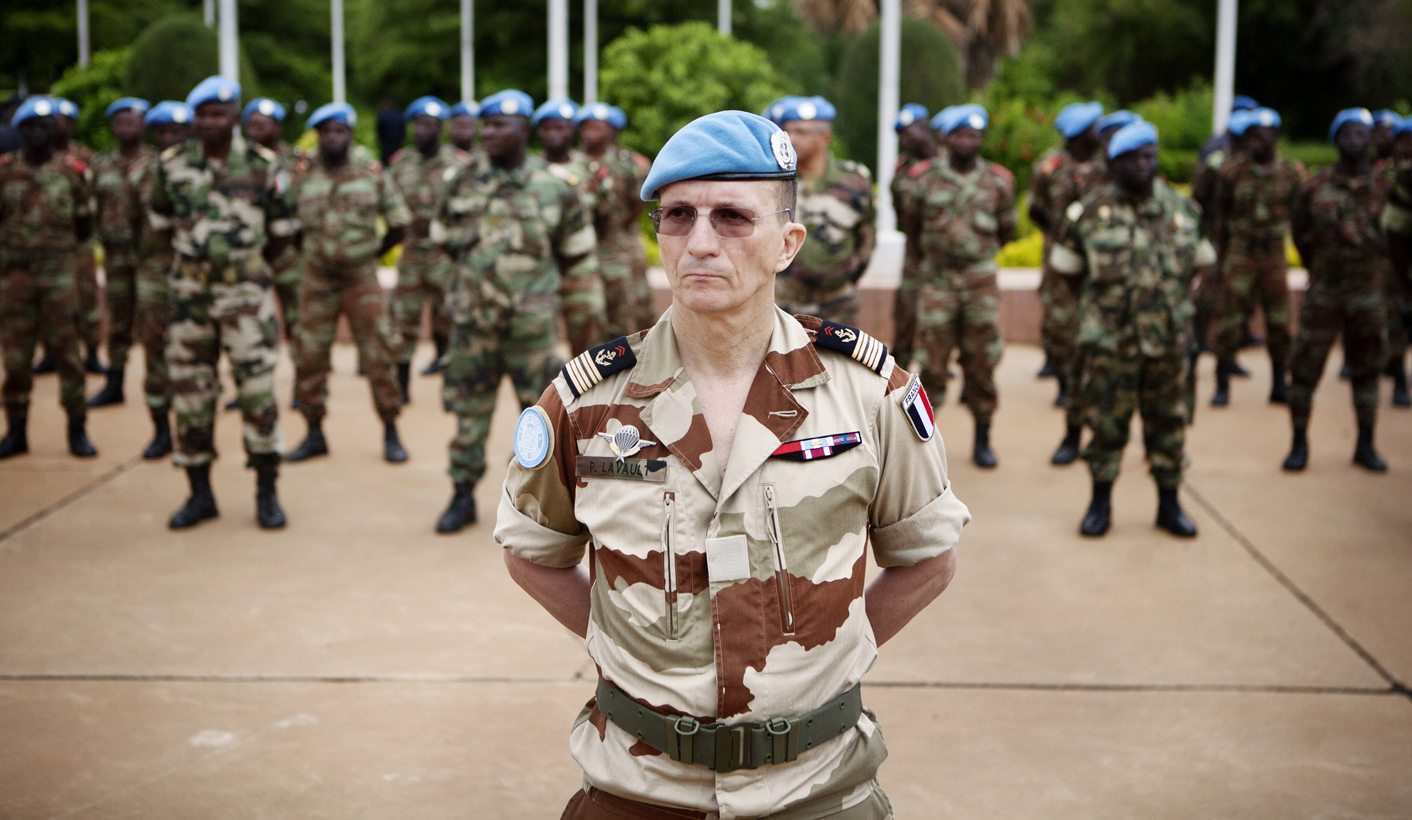 Another conflict, another acronym. MINUSMA is the new-look United Nations peacekeeping effort in Mali – an operation that will be one of the most difficult in the organisation’s history, by its own admission. Better hold on tight to those light blue hats. By SIMON ALLISON.

This is not a metaphor. Here’s Ameerah Haq, the head of the United Nations peacekeeping field support department, on what it’s really like to operate in the vast, desolate, mostly desert expanses of northern Mali: “We are unable to deploy our mobile communications system to Kidal because its sensitive components will melt,” she said, before describing the operation there as “one of the most logistically challenging missions the UN has ever launched”.

But launch it they have. Recent African history is littered with the well-meaning acronyms of international peacekeeping efforts. UNAMID, UNMIS, UNMISS, UNMIL, MONUSCO, MINURSO, MINURCAT, ad infinitum, or almost – these interventions form a blue-hatted roll call of variable utility to which we can now add MINUSMA, the United Nations Multidimensional Integrated Stabilisation Mission in Mali (see why they need those acronyms).

As envisaged in the shiny, air-conditioned corridors of the UN building in New York, MINUSMA will be a crack force of 11,200 soldiers and 1,440 policemen who will clean up a Mali that’s already on the road to recovery, with a mandate “assist”, “stabilise”, and “support”. They’ll go into northern Mali and make sure those pesky Islamist rebels don’t come back to make any more mischief, and help Mali pull off the presidential election which is less than a month away.

But, as Haq explained, it’s not going to be so easy on the ground. The logistics challenges are one thing: northern Mali is unforgiving territory, and the practicalities of mounting any kind of military organisation there – let alone one on this scale – are daunting. It’s not just melting radios. The UN is seriously worried about whether there’s enough water in the region to support its thirsty peacekeepers, and is looking at ways of extracting water from humidity in the air so they don’t put too much strain on the locals’ supply.

But the political challenges are even more complex. Take, for starters, the composition of the force. MINUSMA envisages a lot of boots on the ground – where are they going to come from? Most will drawn from the now-defunct African-led International Stabilisation Mission in Mali (AFISMA), another acronym which became extinct when its 6,000-odd soldiers drawn from various African countries put on the UN’s light blue beret in a “re-hatting” ceremony on Monday. That’s a start, but most of the African soldiers are far from ready to take up their duties; current estimates suggest it will be another four months at least before they can be fully operational (and we’ve heard similar estimates before, with few results). And the best of these African soldiers – the Chadians who were fighting on the frontlines with French, claiming some of the biggest rebel scalps – have had to be coaxed back from N’Djamena with a promise that they won’t be involved in conflict situations. The Chadians also have to be screened to make sure there are no child soldiers in their contingent, after a recent report found that Chad’s army played fast and loose with its age requirements.

France is donating 1,000 troops from the 4,000 or so still in Mali (the rest will go home). France has already committed far more troops in Mali, and for far longer, than it intended to when it launched its surprise intervention against the Islamist rebels in January this year. For the French, MINUSMA represents a get-out-of-jail free card, allowing them to bask in the glory of their successful shock-and-awe assault on the rebels without having to bear full responsibility for the long and messy clean-up.

Another 500 will come from – we weren’t expecting this either – the People’s Republic of China. This is the first time they have contributed men to a peacekeeping mission in Africa. It’s a big, bold move from the new leadership in Beijing, a sign perhaps that China is going to get more involved in African politics, to complement its economic dominance.

So that’s 7,500, give or take. Where the rest will come from remains a mystery – and, if we’re honest, the UN isn’t exactly selling the operation well with all this talk of how hard it’s going to be. Raising more troops is going to be difficult, and expensive.

When it does get into place, MINUSMA’s got more than a few daunting issues to tackle. Let’s talk about that election that they’re meant to facilitate. Given that the French intervention was only six months ago, and that the decision to hold new elections was only made two months ago, it seems ridiculous bordering on the absurd that the date for these elections was set for July 28. And Mali’s electoral commission agrees. “It will be extremely difficult to organise the first round of the presidential election on July 28,” said boss Mamadou Diamountani, pointing out that voter registration is way behind schedule, polling cards haven’t been printed, and that there’s a whole city in northeastern Mali which is still not under the control of either the transitional government army or any international force. And there’s just under four weeks until voting day.

The city in question, Kidal, is run by a Tuareg-led separatist movement who have been reluctantly negotiating with the government to cede control. This is the movement that kick-started Mali’s civil war last year, before being unceremoniously bumped off the top table by Islamist militant groups, specifically Ansar Al-Din, MUJWA and Al Qaeda in the Islamic Maghreb (there’s no honour among rebels). The separatists then joined forces with the Malian and French armies to kick the Islamist rebels out of Kidal, but want to make completely sure that their demands are heard before abandoning their main bargaining chip.

As for the Islamist groups, well, they’re still hanging around. Good reporting from northern Mali is dangerous, and therefore rare, so it’s hard to accurately assess how much these groups have been damaged by the military offensive against them. But given the absence of a major military confrontation, it’s likely that they have retreated to their mountain hideaways to lick their wounds, perhaps to fight again. Certainly, both Ansar Al Din and MUJWA as Mali-based groups have incentive to do just that (for AQIM, the territorial draw is less strong – there have already been some reports that they have set up base in southern Libya or southeastern Algeria).

For the roots of the initial conflict – the Tuareg-led rebellion that turned into a civil war – have yet to be addressed, and there is no sign that either the transitional government, or any of the administrations that might follow it, are going to do so. Mali’s army remains a threat to any budding democracy – it was the coup launched against elected President Amadou Toumani Toure which more than anything else plunged Mali over the abyss. The country’s already endemic poverty and corruption has only got worse in the chaos, creating hundreds of thousands of new refugees and internally displaced people – a humanitarian disaster that has merited its own UN response separate from the peacekeeping effort. The political demands of the northern Tuaregs look likely to be ignored, as they have been ever since Mali’s independence, a cause of simmering resentment against whatever government sits in the capital Bamako that has caused frequent rebellions and incidents of civil disobedience in Mali’s short history.

It is into this cauldron that the new-look UN peacekeeping force will be diving. However hot that desert may get, the politics will be hotter – and even more dangerous. DM