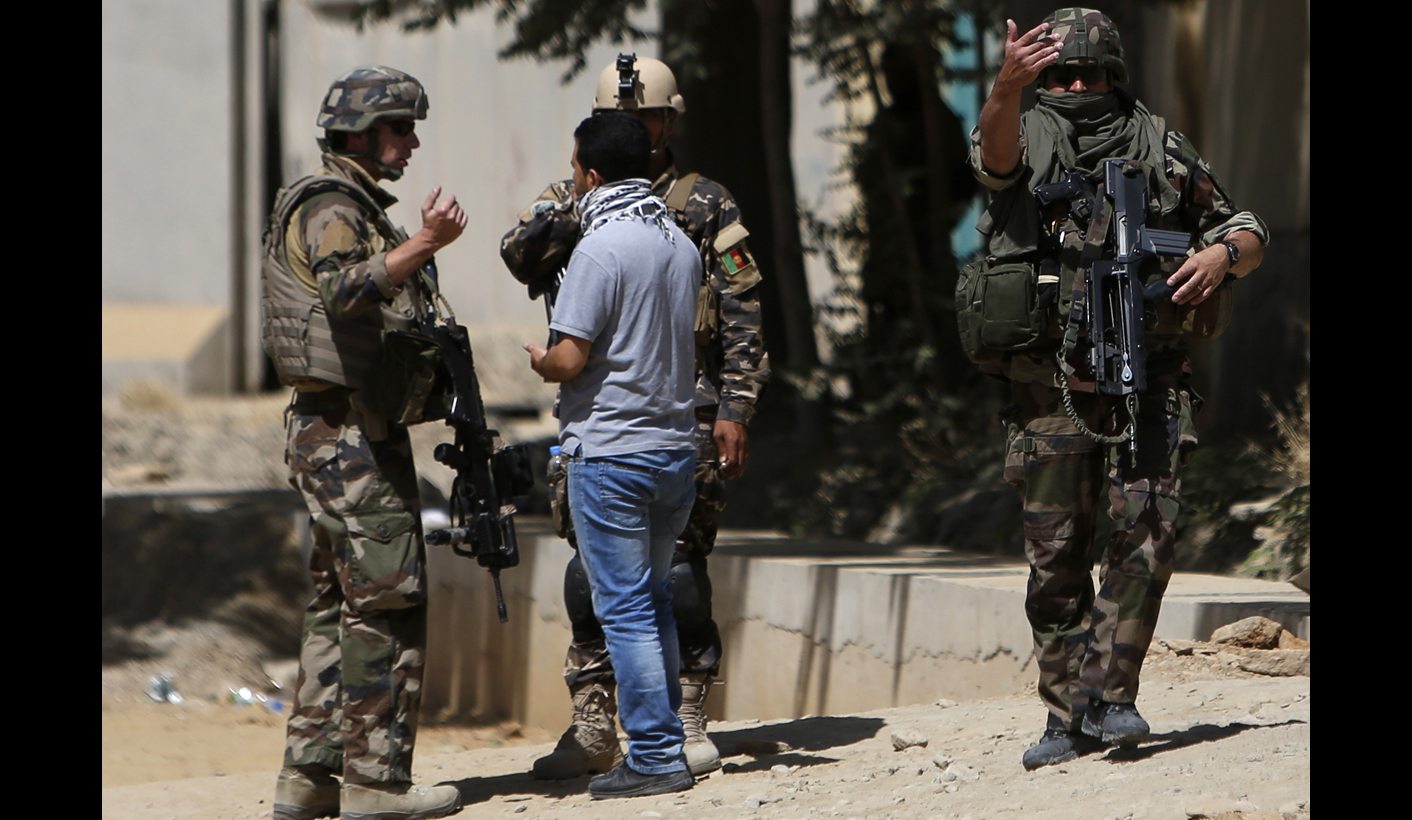 Taliban militants attacked key buildings near Afghanistan's presidential palace and the U.S. CIA headquarters in Kabul, a brazen assault that could derail attempts for peace talks to end 12 years of war. By Mirwais Harooni and Hamid Shalizi.

The Taliban, who have said they are willing to take part in talks with the United States and Afghan President Hamid Karzai’s administration, said they launched the early morning assault, which triggered a 90-minute firefight.

A U.S. envoy was in Kabul on Tuesday to try to smooth the way forward for the stalled talks in the Gulf state of Qatar ahead of the pullout from Afghanistan of most of the NATO-led troops next year. He had been expected to meet reporters at the U.S. Embassy, but the conference was called off.

Karzai was also due to attend, but his whereabouts were not known. A palace official said he was safe.

A Reuters reporter at the palace said the attack began soon after 6.30 a.m. (0200 GMT) when at least one man opened fire with an automatic rifle close to a gate to the palace in central Shash Darak district. The fighting was over before 8 a.m.

Reporters at the palace gates for security checks took cover when the firing started.

A senior government official told Reuters four or five attackers had used fake identify papers to try to make their way through security gates in the Shash Darak district, which leads to Kabul’s most tightly guarded areas.

One car made it through, but a second vehicle was stopped and those inside began shooting. Grenades were thrown.

The area is home to the presidential palace compound, the Ministry of Defence and an annexe of the U.S. embassy at the old Ariana Hotel. The U.S. Central Intelligence Agency’s Afghanistan station is based there.

Afghan forces and U.S. servicemen returned fire and explosions resounded through the area. Children walking to school were caught in the shooting, but escaped serious injury.

A thick plume of smoke was seen rising from the Ariana at the height of the exchanges.

One of the attackers was killed when he detonated a bomb on his body, the government official said, and three or four were killed by security forces. At least two Afghan security guards were killed.

The U.S. Ambassador to Afghanistan, Jim Cunningham, condemned the attack and called on the Taliban to once again commit to the nascent peace process in Doha.

“We remain steadfast in supporting the Afghan government and people against the scourge of terrorism and the violence directed against them,” he said.

U.S. officials have been trying to rejuvenate peace talks in Qatar, thrown off course after rows last week over the opening there of a Taliban office.

The U.S. envoy appointed to help Kabul pursue peace with the Taliban, James Dobbins, arrived on Monday and met Karzai and the Afghan body intended to negotiate with the insurgents.

He told reporters that Washington was trying to determine if the Taliban were willing to engage in talks.

In claiming responsibility for the attack, the Taliban said it had targeted the presidential palace, the CIA office and the defence ministry.

But Afghan security officials told Reuters they believed it had been carried out by the Taliban-linked Haqqani Network. The Haqqani Network is accused of masterminding high-profile attacks in Kabul and is believed to have close links to al Qaeda.

Adela Raz, a spokeswoman for Karzai, dismissed the suggestion that the palace had been under threat, saying any shooting had taken place far from the compound’s walls.

The defence ministry said the assault had been aimed at the Ariana.

In southern Afghanistan, a roadside bomb killed eight women, two children and an elderly man travelling in a minivan in southern Kandahar province on Tuesday, a spokesman for the Kandahar government said. DM

Photo: NATO soldiers prepare to leave the site of attack in Kabul June 25, 2013. Afghan forces put down an early morning attack by Taliban insurgents on the presidential palace and nearby buildings in central Kabul on Tuesday, with police saying all the assailants had been killed after a 90-minute gunfight. REUTERS/Mohammad Ismail