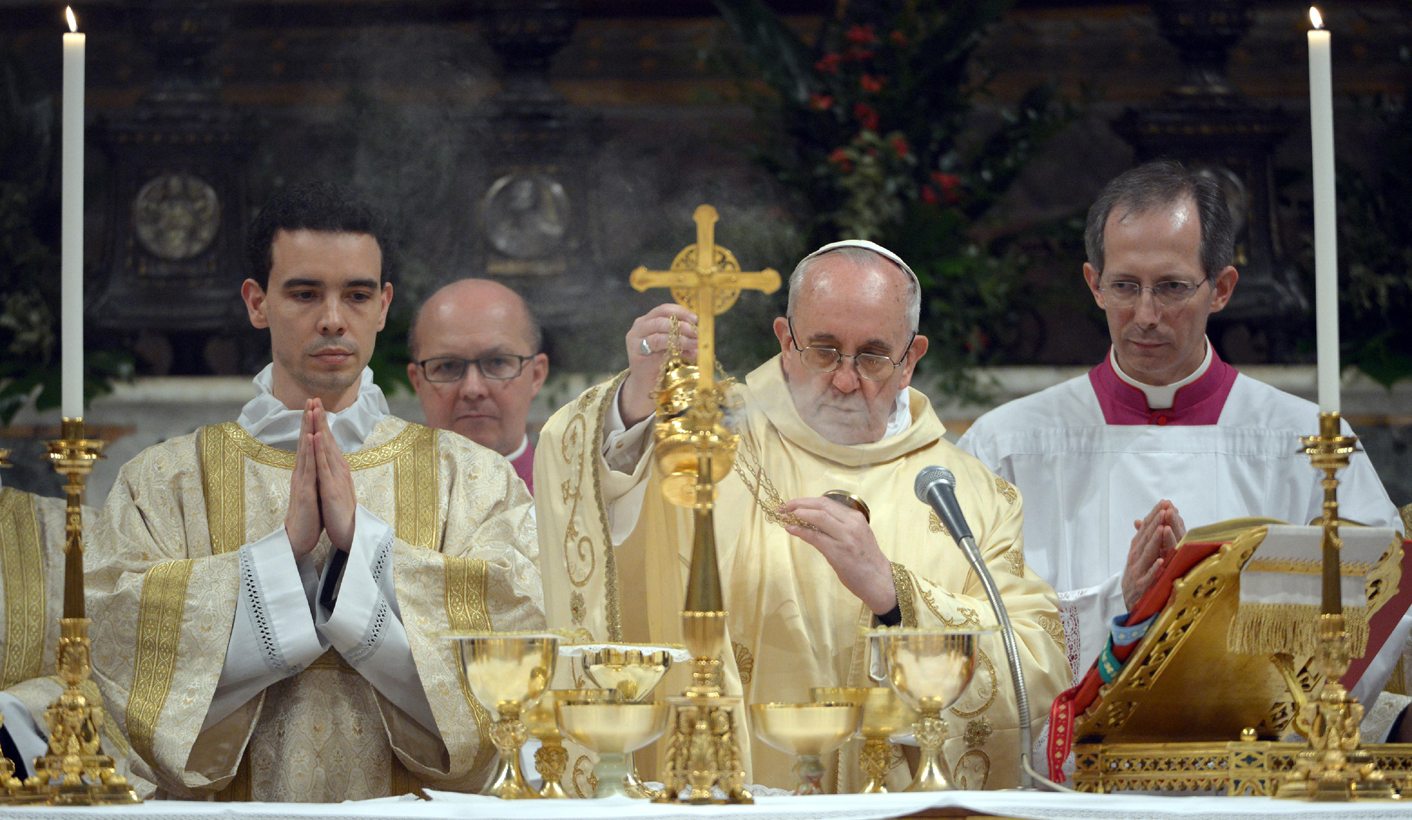 Few religious communities have gone as far in fighting climate change as a church in Queensland, Australia, which has 24 solar panels bolted to the roof in the shape of a Christian cross. By Environment Correspondent Alister Doyle.

“It’s very effective. It’s inspired some members of our congregation to install panels on their homes,” Reverend David Lowry said of the “solar cross” mounted in 2009 on the Caloundra Uniting Church, which groups three Protestant denominations.

Many religions have been wary of moving to install renewable energy sources on their places of worship, from cathedrals to mosques – or of taking a strong stand on climate change in general – despite teachings that people should be custodians of nature.

But slowly, that may be changing, thanks to new religious leaders including Pope Francis, the head of the Roman Catholic Church.

Francis’s stress on environmental protection since he was elected in March and his choice of the name of a 13th century nature lover – Saint Francis of Assisi – may make a difference for all religions trying to work out how to safeguard the planet from threats including climate change.

Under his predecessor, Pope Benedict XVI, the Vatican took green steps such as installing solar panels on the roof of the Papal Audience Hall in 2008. It says it wants to cut greenhouse gas emissions, but has no formal target.

“Religious environmentalism is slowly increasing,” said John Grim, a coordinator of the forum on religion and ecology at Yale University in the United States. “It’s very uneven. Religions tend to be very conservative in their practice and doctrine.”

Grim said the pope’s influence was significant since few other religions recognise a single earthly leader – and there are 1.2 billion Catholics, amounting to a sixth of humanity, according to the Vatican.

In his inaugural homily, Pope Francis stressed that people should safeguard the Earth.

“Let us be ‘protectors’ of creation, protectors of God’s plan inscribed in nature, protectors of one another and of the environment. Let us not allow omens of destruction and death to accompany the advance of this world!” he said.

In a 2010 book “On Heaven and Earth”, when he was archbishop of Buenos Aires, he said mankind sometimes lost respect for nature. “Then ecological problems arise, like global warming.”

Some religions have been reluctant to be associated with climate change policies because of divisions among believers. A 2012 Pew Research Center poll showed that only 42 percent of Americans agree global warming is mainly man-made, a view overwhelmingly held by climate scientists, for example.

The Church of England says it aims to cut its carbon emissions by 42 percent by 2020 and 80 percent by 2050 across widely varying energy use in 16,000 buildings, but it is an exception.

“Some churches are used all week and others used very occasionally, with only one light bulb,” said David Shreeve, environmental advisor to the Archbishops’ Council. He said other religions were now asking for advice on emissions cuts. Irrespective of climate change, big savings can be made by plugging draughts and improving heating and lighting.

Some believers object that solar panels can damage or disfigure fragile historic buildings. Some cathedrals, like the Catholic Saint Stephens in Vienna, have elaborate patterns on the roof.

Bradford Cathedral, where the oldest parts of the Nave date from 1458, installed solar panels in 2011 and said it was the first cathedral in England – and perhaps in the world – to generate its own power.

Among other examples, a planned mosque in Bursa, west Turkey, aims to use solar panels and install a vertical axis wind turbine – without big revolving blades – on a minaret.

“Mosques … can be covered with photovoltaic panels,” the mosque’s architect √áelik Erengezgin said.

Green initiatives by religious leaders and groups are not new.

The Jewish Temple Emanuel in Lowell, Mass., installed solar panels in 1978 in what is believed to be the first such system on a religious building in North America, the Lowell Green Building Commission says.

And Greek Orthodox Ecumenical Patriarch Bartholomew, spiritual leader of the world’s Orthodox Christians, has long been called the “Green Patriarch” for seeking to protect the environment, from organising conferences about fresh water to writing an encyclical in 2012 urging repentance for “our sinfulness in destroying the world”.

Saint Francis has long been a green inspiration.

In what are known as the Assisi Declarations from 1986, Buddhist, Christian, Hindu, Jewish and Islamic leaders called for people to live in harmony with nature. Baha’i, Jainism and Sikhism later added their own declarations.

In the United States, many evangelical Christians stress a broad need for “stewardship of creation”, rather than man-made climate change, as a spur to action.

Many evangelical Christians are Republicans who are more likely than Democrats to doubt that climate change is mostly caused by human activity, such as burning fossil fuels.

In Australia, Lowry said the solar panels were saving money and cutting greenhouse gas emissions for the Uniting Church, which brings together Methodists, Congregationalists and Presbyterians.

“The solar cross … doesn’t bring hordes of people into the church,” he said. “But it helps people understand that God is a presence in the world in which we live.”

The Vatican has an observer seat at U.N. talks among 200 nations who have agreed to work out, by the end of 2015, a climate deal to avert more floods, droughts and rising sea levels.

Pope Francis himself has focused on environmental protection without yet spelling out clear solutions.

Raising awareness of the environment could be a step to modernize the Church, besieged by scandal for covering up sexual abuse of children by priests and whose strict moral traditions are often at odds with a increasingly secular society.

“With Pope Francis there is new hope,” said Reverend Henrik Grape of the Church of Sweden, who is also a member of the World Council of Churches’ climate change group. DM