A beginner’s guide to the Comrades Marathon 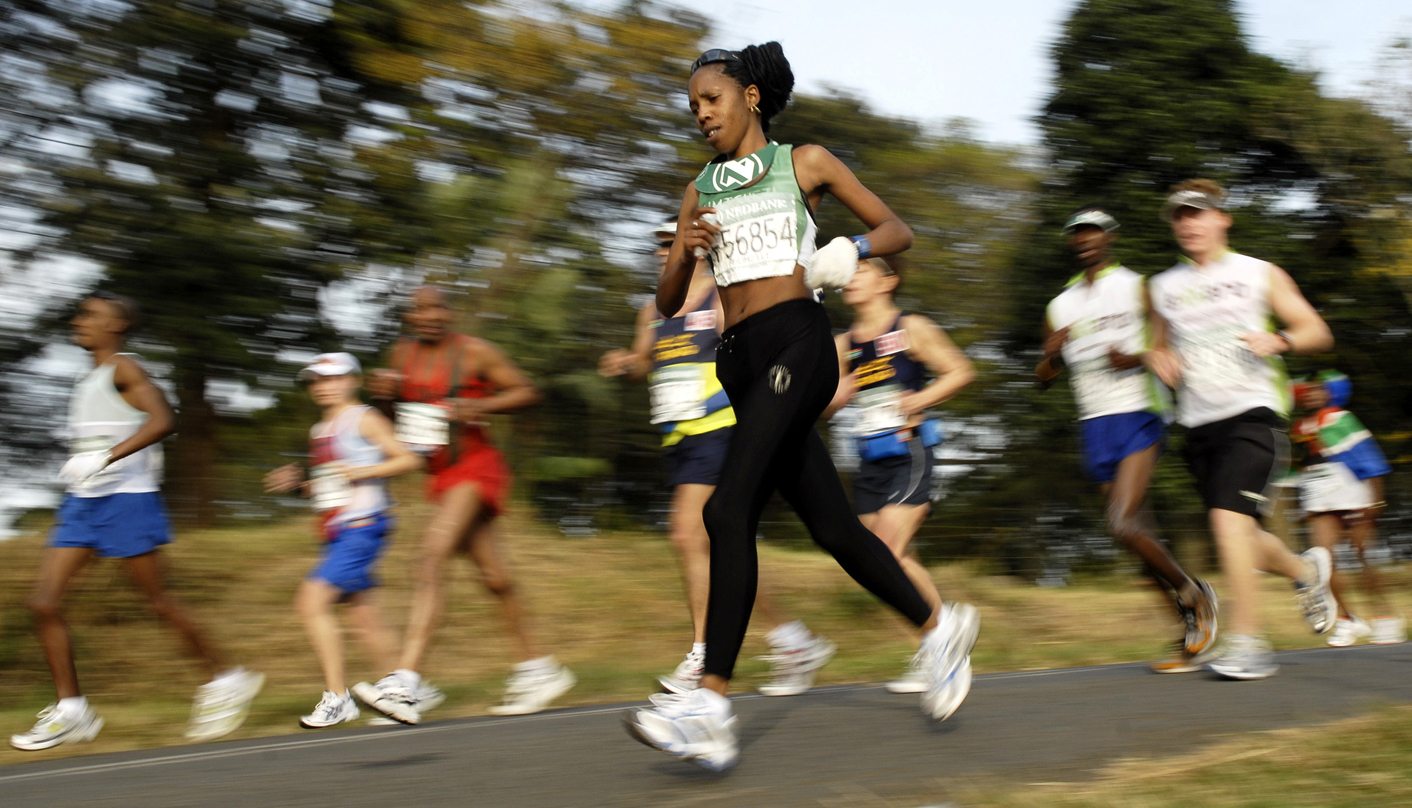 You may not have noticed it, but from cities to villages, workplaces to homes there is something especially South African going on in the air this week. It may not be visible but going on around you is a unique collective anticipation that is unifying very poor and very rich, black and white, men and women: nerves tingle, there are unsolicited palpitations of the heart, bad dreams and good dreams. Yes: the Comrades is almost here. By MARK HEYWOOD.

I am not a demographer, so cannot scientifically depict the spider’s web that fans out from the Comrades runner to her family, her real friends and Facebook friends and through South Africa’s thousands of registered athletics clubs – all now packing their bags for Pietermatizburg. But I imagine that the web stretches its way to the furthest nooks and crannies of our land.

The Comrades Marathon, to be run this Sunday, 2 June, is infamous for its near 90 kilometers. Because it has become so ingrained in our cultures, perhaps uniquely so, it’s worth offering a few insights about what this race is about.

The first myth to dispel is that the Comrades is run in a day. Generally, it is something that infects the entrant in January and remains until June. The day of the ‘race’ is really just the final lap, albeit one day that vindicates (hopefully) months of arduous, frequently tedious, training. It is the culmination of a slow ticking off of the kilometres that various experts say must be covered. It is the last in a succession of Saturday and Sunday mornings where the entrant does the opposite of what the world thinks you should do on those days: sleep in.

Neither is the Comrades just a matter of the body. In the training period it is experienced in dreams and not a few nightmares. Common are nightmares where the runner arrives half an hour after the race has started, or where despite the expenditure of energy and panic, you are frozen in time, rooted to the ground, unable to make body and mind co-operate.

The object of this ritualistic rigmarole is to acquire a state of fitness where extreme physical exertion does not lead to collapse or a heart attack. A level of fitness is to be achieved that must last for just one day. Indeed, after the mission accomplished, one of the things that strikes me is how quickly one loses the fitness – mentally and physically, the body returns quickly to its pap state.

On this day a large crowd of ostensibly ordinary people mingle with a handful of giants. Earlier this year I encountered a worker in Lusikisiki in the Eastern Cape, training in his work overalls. Vuyo Mbuli ran it twice and should have run it again this year. Last year, eight HIV-positive members of the Treatment Action Campaign (TAC) ran their first race in ‘HIV positive’ T-shirts. These and many more mortals have a day to share the stage with legends like Bruce Fordyce, Alan Robb and a thinning string of crazed ordinary people who’ve run the race 10, 20, 30 and some even 40 times.

Externally, it’s the long road. Throughout the day there is an endless succession of faces and cheers, landscapes and valleys. There are high points and low points. One high point is the 500 metres it takes to run past the Ethembeni Children’s Home for the Physically Disabled and Visually Impaired in Inchanga. Here, hundreds of disabled children line the road. People stop running to shake hands and hug. One runner told me he carries a wad of twenty R10 notes to hand out to the children. This is not done out of pity or charity, but to show affirmation and love. One year a runner, dressed as Father Xmas, carried a blown-up promissory cheque of R100,000 raised for the school and stopped the whole procession while he handed it over.

Internally it’s the intense inward focus that makes a runner forget that everyone else who is beside, behind and in front of her is going through much the same pain/pleasure. For the Comrades is not just a test of physical endurance; it’s a battle between the brain and body. Although both start off in sync, there comes a time when the brain doesn’t believe in the body’s ability to keep going. It receives signals of pain or draining energy and interprets them as reason to slow down or stop, even impending defeat. In my experience, just after reaching the high of half way, a schizophrenic war begins between two parts of the mind. One part desperately wants success, the other, less soulful, is generally only used to reading electronic signals transmitted through our nerves. They call ‘halt’!

So here we are again.

This will be the 88th running of a race that endured through most of South Africa’s tumultuous twentieth century and has a history interwoven with the contours of our politics. Although it started in 1921, it was only in 1935 that one Robert Mtshali became the first ‘unofficial’ black runner. It took until 1975 for black runners to be allowed to compete officially, albeit that they were required to run with their dompas and race numbers that indicated in big black letters whether they were SOTHO, ZULU or XHOSA. In 1981, the courageous Fordyce wore a black arm band to commiserate Republic Day – and won his most famous first victory. In 1989, Sam Tshabalala became the first black person to win. And in the same year we had the mesmerising, unfathomable win of Frith van der Merwe, in 5hrs 54 seconds – a time unmatched over 20 years later.

Several years ago, the ANC Youth League succeeded in knocking the race off its June 16th plinth and in doing so, scored an own-goal. Ironically, the Comrades Marathon is not a distraction from the values and spirit of the youth of 1976, but a way of affirming it. However, the Youth League’s approbation has not stopped millions of people admiring the spectacle on TV. With a pedigree of blood, plenty of sweat and not a few tears, the Comrades is approaching its 90th birthday with a sprightliness that lies in the fact that it has become part of our soil and soul. See you on Sunday! DM

Photo: Runners compete in the 89km Comrades Marathon between Pietermaritzburg and Durban, May 24, 2009. REUTERS/Rogan Ward