China Offers India A “Handshake Across The Himalayas” 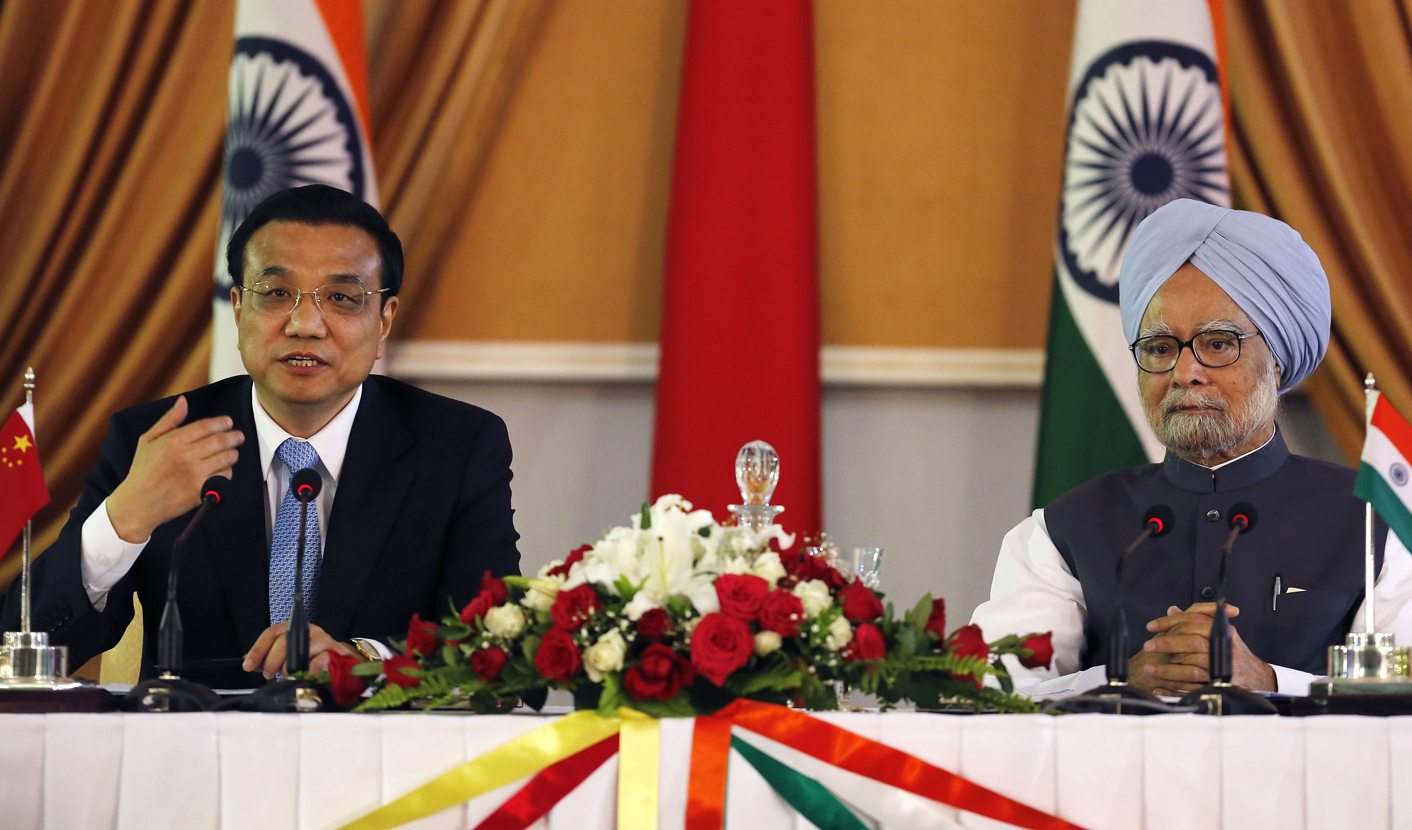 India and China will study new ways to ease tensions on their ill-defined border after an army standoff in the Himalayas, Chinese Premier Li Keqiang said on Monday on his first official foreign trip. By Frank Jack Daniel and Rajesh Kumar Singh.

The number two in the Chinese leadership offered New Delhi a “handshake across the Himalayas” and said the world’s most populous nations could become a new engine for the global economy if they could avoid friction on the militarised border.

“Both sides believe that we need to improve the various border-related mechanisms that we have put into place and make them more efficient. We need to appropriately manage and resolve our differences,” Li said at a joint news conference with India’s Prime Minister Manmohan Singh.

The two men appeared smiling and relaxed. India’s Foreign Ministry said they got on well. There were small breakthroughs on trade, but no major agreements were signed.

Among the measures being looked at to reduce the risk of confrontation is allowing higher level meetings between regional military commanders, an Indian official said.

While there has not been a shooting incident in decades, the long-running dispute gets in the way of improving economic relations between the neighbours, who account for 40 percent of the world’s population and whose fast growing markets stand in contrast to the stagnant economies of the West.

Bilateral trade reached $66 billion last year but both sides believe the potential is much greater. India runs a $29 billion deficit with China, a sore point that they sought to address in a joint statement, with specific reference to pharmaceuticals, IT services and agriculture.

However, similar promises made in previous joint statements failed to slow the ballooning trade gap.

India’s Essar Group conglomerate is nonetheless set to sign a $1 billion loan deal with China’s China Development Bank and China’s largest oil and gas producer PetroChina during the trip, sources said. They said the loan would be backed by the supply of refined products to PetroChina.

After a welcome ceremony at India’s presidential palace, Li said he wanted to build trust and cooperation.

Li said he chose New Delhi as his first destination on his four-nation tour to show how important India is for China and also because he had fond memories of visiting as a Communist youth leader 27 years ago.

Srikanth Kondapalli, an academic and expert on China said progress was at best incremental, despite the warm words from Li and a media campaign around his trip apparently aimed at cooling Indian public anger following the three-week standoff on the Himalayan plateau that ended on May 3.

“There was a lot of hype created before this visit, but the new leadership didn’t show many new ideas,” Kondapalli said.

While most observers think it will take years to resolve the border dispute, recent statements suggest China’s new leaders would like to speed things up, perhaps to shift its attention to disputes elsewhere in Asia, including the South China Sea.

Singh said negotiators would meet soon to seek an early agreement on a framework to settle the border, a goal that has eluded representatives in 15 rounds of high level talks.

The stand-off on the border was the latest reminder that sensitivity runs high. It distracted diplomats’ attention from talks on investment and trade ahead of Li’s trip and soured public opinion toward China in India.

The disagreement over who owns barren patches of the Ladakh plateau and the entire Indian state of Arunachal Pradesh means there is almost no road or rail connectivity between the giants.

At a meeting with Singh in Durban this year, Chinese President Xi Jinping said the two countries should seek a solution “as soon as possible” – a departure from previous language. His urgency was echoed in Delhi last week by foreign ministry spokesman Qin Gang, who said the two sides needed to “redouble efforts” to reach a solution at an “early date”.

It would be politically difficult for an Indian politician to concede territory to China. Protests by nationalist groups in Delhi and the northern state of Kashmir on Monday against Li’s visit highlighted anti-China feeling among some Indians.

Prior to Monday’s meetings, a senior official at the Foreign Ministry said India was sceptical of recent overtures and would wait to see if China would bring anything new to the table.

After India, Li is due to visit Pakistan, Switzerland and Germany and is likely to carry a message that China wants more open foreign relations and should not be seen as a threat. DM

Photo: Chinese Premier Li Keqiang (L) speaks with the media as India’s Prime Minister Manmohan Singh looks on during the signing of agreements ceremony in New Delhi May 20, 2013. China and India have agreed on a roadmap to reach a “dynamic balance” in bilateral trade between the two nations, Li said on Monday, following Indian complaints about the size of the trade deficit with its neighbour. REUTERS/Adnan Abidi