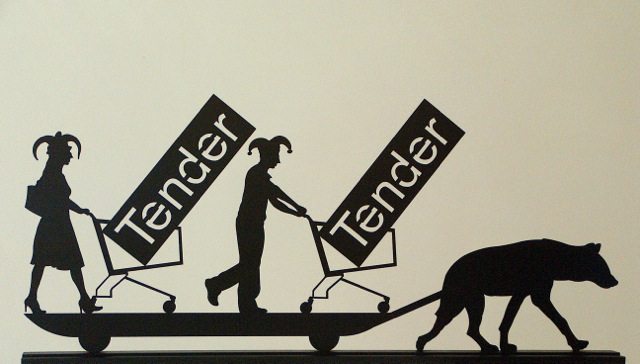 Jaco Sieberhagen’s exhibition, “The Carnival (No dogs allowed)”, though nowhere nearly as in-your-face as Brett Murray’s “Hail to the Thief”, which featured “The Spear”, is arguably far more critical of the current regime’s iniquities and two-facedness. Yet the official response to the sculptor’s work has been a profound silence. J BROOKS SPECTOR examines the startlingly different responses to two exhibitions.

Across the street from that now infamous gallery space where Brett Murray’s The Spear became the object of so much angry dialogue, debate and, ultimately, desecration last year; this time around, it is another gallery, Artspace, that is hosting its own display of dangerous art. Jaco Sieberhagen’s sculptures are now on display, grouped together in a show entitled: “The Carnival (No dogs allowed)”. This clearly seems a wink-wink-nudge-nudge reference to a certain recent comment by the South African president about the now-misaligned relationship between dogs and men, juxtaposed with the human carnival that is contemporary South African politics.

His works are beautifully crafted out of flat steel, precisely laser-cut, and then carefully painted matte black. While they are two-dimensional silhouettes, they take on a more solid sense of depth and dimensionality when they are displayed on a continuous rail mounted on plinths, with the whole ensemble placed in a stark white room with no other decoration. The rail undulates through the full length of the gallery space, turning the individual works into a procession, a carnival parade, and a caravan of jesters, fools, knaves and liars. In fact, Sieberhagen’s works are at least as subversive as Murray’s highly controversial exhibition ever was – but they take a bit more time to work their magic as the viewer reads into the jokes or feels the subtle but sharp pinpricks as they draw their blood.

Sieberhagen has actually tapped into a deep vein of art that protests and rails against all the iniquities and two-facedness of those on top. To look at the imagery in Sieberhagen’s seemingly simple silhouettes is also to feel echoes from Hogarth, Daumier, and Grosz, and – more contemporarily and locally – from William Kentridge as well. Hidden among the Sieberhagen images, for example, there are even some small dogs and an old fashioned gramophone or two with its amplifying horn, a megaphone for political messages. Perhaps this is a deliberate – or even an unconscious – homage to Kentridge’s use of that iconography in many of his graphic and film works from the 1990s.

There was a time in South Africa when politically and socially potent protest art – drawing upon subjects that clearly deserved to be protested vigorously – was often most effective when it came in the form of posters, illustrations for sometimes-ephemeral political broadsides, banners at demonstrations – and even on T-shirts. Sieberhagen has drawn upon this tradition too, but he has flattened out the images into precisely made, solid steel cut-outs that refer to more standard representational art, but without actually being that kind of work.

Still, to look at work like Tender-risers is to find meaning in both the visuals as well as in the title. The piece features a man and woman – both wearing those floppy court jester hats with bells on the end of the points. The couple are pushing shopping trolleys, each containing a large box with the treacherous word “tender” emblazoned on it. The couple and their carts are on a flatbed trailer – and a hyena is pulling the trailer, not surprisingly. Right at the beginning of the parade, there is a cut-out of a young African child with a protuberant belly. He is holding a small flag behind his back and he is standing next to a seated dog, presumably man’s best friend, despite the president’s words.

The second float in line depicts a dung beetle – Africa’s most ubiquitous insect. The beetle is pushing a large ball of what dung beetles push – with the words “Blame apartheid” on the side of the ball. In the centre of the dung ball is another one of those old-fashioned gramaphones, reminiscent of the old Kentridge leitmotif from a caustic work like The Negotiations Begin that he produced right at the end of Apartheid.

Sieberhagen’s A National Key Point features yet another jester-hatted man, this time a pot-bellied figure more than a little suggestive of Jacob Zuma. And also not a little like one of those art deco-style illustrations in a children’s book of Mother Goose rhymes from the 1920s or a picture in Collier’s magazine. The figure is seated in front of a table with an enormous meal right in front of him and the whole tableau is also on a trailer, but pulled by a vulture. Now whatever could that mean?

By most standards, Sieberhagen’s work in “The Carnival (No dogs allowed)” is harsher and more critical towards the current regime than most of what was actually in Brett Murray’s “Hail to the Thief” last year. So what explains the startlingly different responses to these two exhibitions? Perhaps the key is the way Murray’s work was irreverent and cheeky, deliberately pulling apart and mocking the most revered symbols of the new regime – its flag and colours, its emblems, its presumed ideological heritage reaching back to the state socialism of the old USSR, and, of course, the naked prominence of the president’s genitals. Murray rewrote the ruling party’s symbols of power and legitimacy – a monetary symbol smack at the heart of a party emblem, a diagonal “sold” stamped across the party’s flag. This is right-in-your-eye stuff.

Photo: Not my Responsibility

By contrast, while Sieberhagen has slyly alluded to what the rulers do; even more, he has referenced what the rulers are. Presumably that should hurt even more, but official reaction has been one of profound silence. Perhaps the point is that the rulers aren’t really concerned with all those oblique theoretical artistic, deconstructionist, post-modern critiques of the ruler, the nomenclatura and their behaviours. This may not be the stuff that raises the hackles of the crowds.

In contrast to that, what Brett Murray’s The Spear did – as the picture that caused all the trouble – was to strip away the majesty of the ruler, showing the president as a man who was pretty much like any other man – and whose expression of leadership was inextricably bound up in blunt notions of male sexuality and fecundity. This is something, after all, that he has never really bothered to deny anyway and that he often seems to flaunt in his ebullient embrace of polygamy in any case. By contrast, however, Sieberhagen has teased out his darker critique through the use of animal imagery (praying mantises, crows, vultures, hyenas, and chameleons), an apparently almost childlike illustrative quality, and his supposedly simple line drawing-like silhouettes that must be examined closely for the multiple layers that can be read from them.

Still, Sieberhagen’s work is less a broad, angry critique in the manner of a Goya or Daumier than a more private, sardonic, knowing conversation with the viewer. One critic observed that the artist has drawn upon the carnival tradition where the social hierarchies of everyday life, as well as ready-made truths, are profaned and overturned by suppressed voices. Fools become wise and kings become beggars. His works draw you in slowly and stealthily as you see more and more the allusions to other things – and as you find yet one more layered meaning in a seemingly simple cut-out of flat steel, painted in a monochrome, clean, matte black.

For himself, Sieberhagen says one of the earliest sources of his artistic inspiration was when he first heard the classic pop song, It’s a strange, strange world we live in, Master Jack. He says of that, “Forty-five years later, the carnival seems even more curious with so much more to try and make sense of.” And of this particular exhibition, he explains, “My fellow countrymen and women never cease to fill me with wonder as to the extent they would go to, to entertain us. Time and time again I am amazed by the care they would take to construct a new float or repair an old float for the parade. Some of the new floats look disturbingly familiar to those from the past, while some are quite unique in their originality.” DM

Photo: Who Let the Dogs Out

Photo: Wow, Look at me Now

Sieberhagen’s work is included in major collections throughout South Africa such as in the Constitutional Court and a variety of major corporate collections. This exhibition continues at Artspace (142 Jan Smuts Avenue, Parkwood) to 30 April.