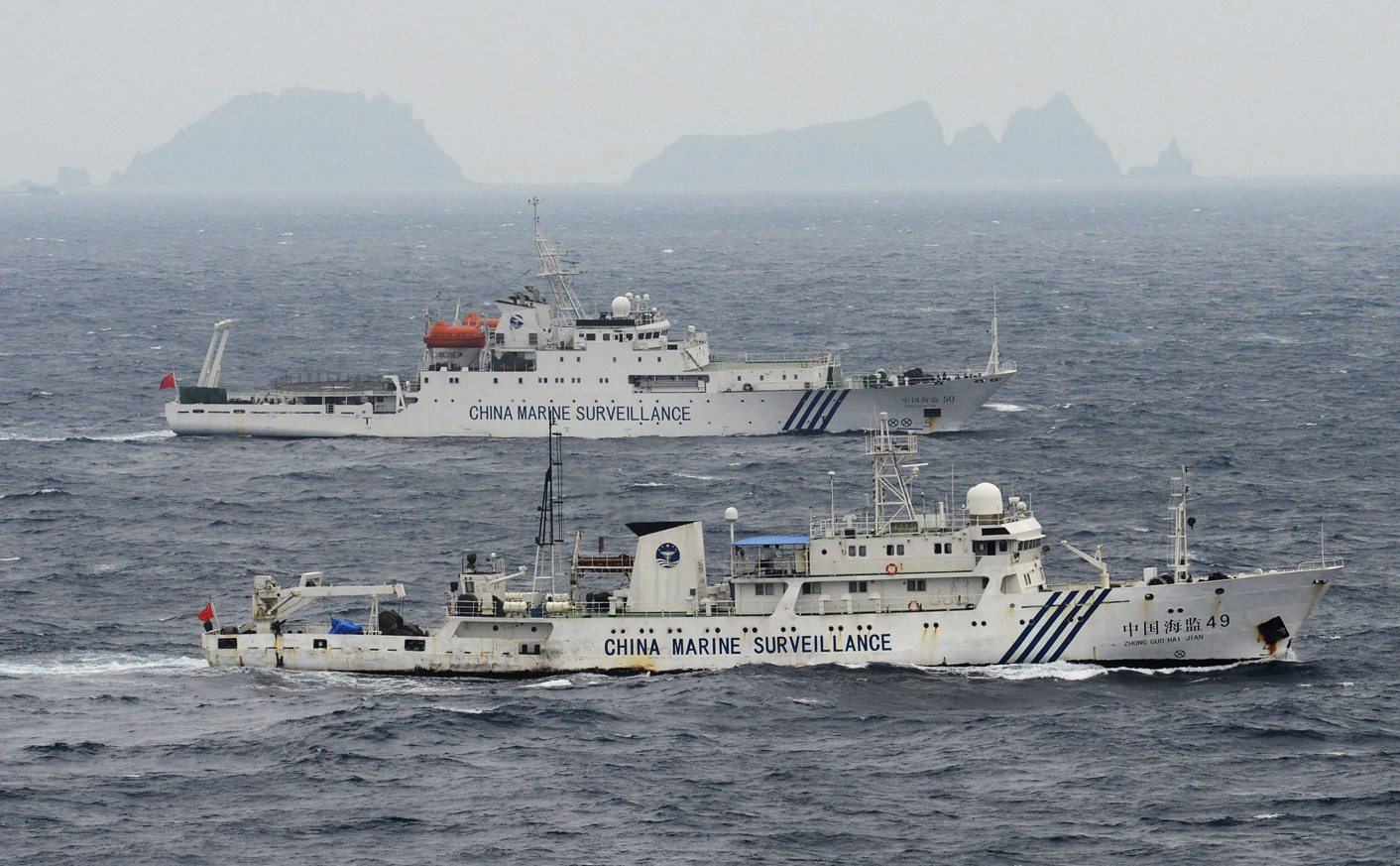 Tensions flared between Japan and its Asian neighbours after a group of Japanese lawmakers visited a shrine seen by China and South Korea as a symbol of Japan's past militarism, and Chinese patrol vessels played cat-and-mouse with a flotilla of Japanese nationalists near disputed islands in the East China Sea. By Kaori Kaneko.

Beijing protested over the voyage by 10 boats carrying about 80 Japanese activists into waters near the islands, known as the Senkaku in Japan and the Diaoyu in China.

Japan also protested at what it called an intrusion by eight Chinese patrol vessels into its waters near the uninhabited Japanese-controlled islands, which are near rich fishing grounds and potentially lucrative maritime gas fields.

Prime Minister Shinzo Abe, pressed in parliament to say how Japan would react to a Chinese attempt to land on the tiny islands, said it would be “natural to force them to leave”.

But Tokyo appeared keen to avoid a clash between the nationalists’ flotilla and the Chinese ships. Japan’s Coast Guard, which had 13 vessels shadowing the boats, urged them to leave and escorted them away.

Last year members of the same group, “Ganbare Nippon” (Stand Firm! Japan), landed on one of the rocky islets and triggered anti-Japanese protests in China, where lingering resentment over Japan’s wartime aggression has been rekindled in recent days.

In Washington, State Department spokesman Patrick Ventrell reiterated that the United States doesn’t take a position on “the question of the ultimate sovereignty over the islands.”

“We do urge all parties to avoid actions that could raise tensions or result in miscalculations that would undermine peace, security and economic growth in that vital part of the world,” he told reporters at a daily briefing.

China chastised Japan for Tuesday’s visits by at least 168 lawmakers to Tokyo’s Yasukuni Shrine, which honours 14 leaders convicted as war criminals by an Allied tribunal along with Japan’s war dead. The pilgrimage came after Abe made an offering and Deputy Prime Minister Taro Aso and two other ministers visited Yasukuni over the weekend.

“Regardless of what method or what identity these Japanese leaders take in visiting Yasukuni Shrine, fundamentally it is intentionally denying Japan’s militaristic invasionist history,” Hua said.

Some Japanese experts said that, despite the latest tensions, the Asian rivals might avoid a re-run of the violent anti-Japanese protests last September that hurt economic ties between Asia’s two biggest economies. Those protests were sparked when Japan’s government bought the islands from a private owner.

“It may be things as usual. The mood will get worse but as time goes by, it may come back to more or less the same place,” said Yoshihide Soeya, director of the Institute of East Asian Studies at Tokyo’s Keio University. He noted China had reacted most strongly to Yasukuni visits in the past when they were made by premiers, foreign ministers or chief cabinet secretaries.

South Korea, where bitter memories of Japan’s 1910-1945 colonisation run deep, has cancelled a trip to Japan by its foreign minister following the weekend shrine visits.

Asked about the cancelled meetings, the State Department’s Ventrell said “good relations between Japan and China benefit everyone in the region. That’s true also for Japan and South Korea.”

On Tuesday, a South Korean foreign ministry spokesman in Seoul said matters of history should be kept separate from efforts to cooperate over North Korea’s nuclear ambitions.

“It is helpful that the region’s countries and the international community work together and pool their wisdom to solve this problem (of North Korea),” said Cho Tae-young. “But when it comes to history issues like the Yasukuni visit, our government takes a firm stance. That must not be mixed.”

Conservatives in Japan argue they should be able to pay their respects to the nation’s war dead in their own way.

“It is natural for lawmakers to worship at a shrine for people who died for the nation and every nation does this,” Hidehisa Otsuji, a ruling Liberal Democrat Party (LDP) lawmaker who chairs the parliamentary group behind the visit, told a news conference. “I don’t understand why we get a backlash.”

The group typically visits the shrine during its annual spring and autumn festivals, although the delegation of lawmakers was unusually large this year.

Aso also shrugged off overseas rebukes. “I first visited Yasukuni on April 28, 1953 and often went there ever since,” Aso, who doubles as finance minister, told reporters.

“I go there two or three times every year and it’s not something that should be taken up now. There’s a reaction from overseas? But that’s their reaction and I don’t think it will much affect Japan’s diplomatic relations with other countries.”

Abe has enjoyed sky-high popularity ratings of more than 70 percent since he took office in December and launched his “Abenomics” plan to boost growth and beat deflation with hyper-easy monetary policy, spending and structural reform.

The prime minister, who has said he regretted not visiting Yasukuni during his 2006-2007 term in office, has been walking a fine line between talking tough in the territorial row with China and leaving the door open for dialogue.

Voters want Abe to put priority on fixing the economy rather than other issues close to his heart, such as revising Japan’s pacifist constitution, an opinion poll showed this week. DM

Photo: An aerial photo shows Chinese marine surveillance ships Haijian No. 49 (front) and Haijian No.50 cruising in the East China Sea, as the islands known as Senkaku isles in Japan and Diaoyu islands in China are seen in the background, in this photo taken by Kyodo April 23, 2013. Tensions flared between Japan and its Asian neighbors after a group of Japanese lawmakers visited a shrine seen by China and South Korea as a symbol of Japan’s past militarism, and Chinese patrol vessels played cat-and-mouse with a flotilla of Japanese nationalists near disputed islands in the East China Sea. Mandatory Credit. REUTERS/Kyodo