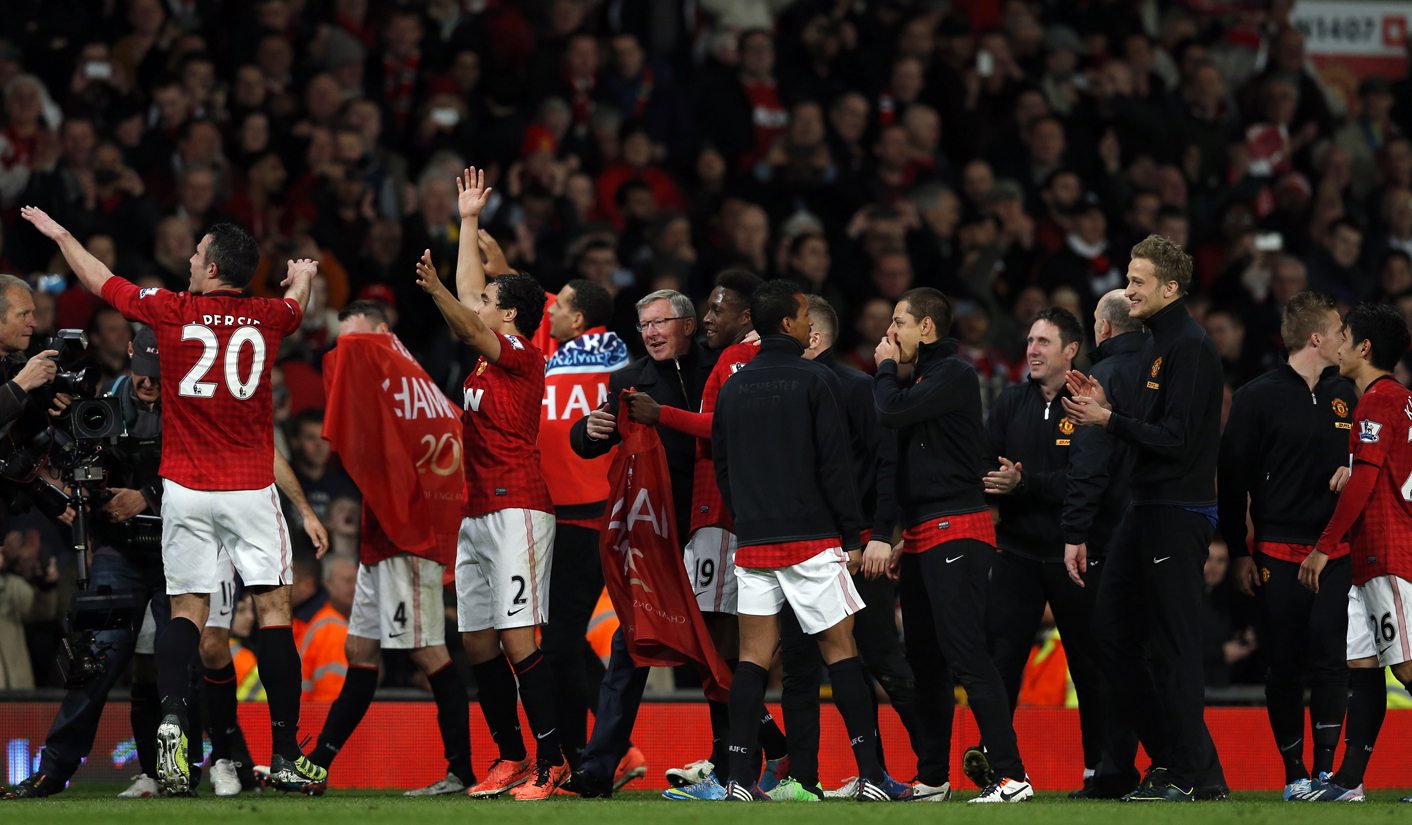 Manchester United reclaimed their Premier League crown in style on Monday as Robin van Persie's hat-trick inspired a 3-0 win over Aston Villa that gave them an unassailable 16-point lead over Manchester City and erased the pain of last season. By Sonia Oxley.

Van Persie’s goals after two, 13 and 33 minutes – the second among the best ever scored at Old Trafford – propelled Alex Ferguson’s side to a record-extending 20th league title in front of a jubilant home crowd.

After the hurt of having their crown snatched away by Manchester City on goal difference in stoppage time on the final day of the 2011-12 season, United were determined to make sure of the title with four games to spare.

“When you lose the title it’s hard to take it, the way we did (last year) it was not a nice feeling,” forward Wayne Rooney, who set up two of the goals in a performance that went some way to answering his recent critics, told Sky Sports.

“So we’ve all dug in deep, we’ve all worked together and done fantastic to get ourselves into this position and tonight we finished the job off.”

With the championship guaranteed, United still have much to play for as they aim for 96 points to beat the record points total of 95 set by Chelsea in 2004-05.

With United’s tally currently on 84 points, Ferguson’s side remain on target to overhaul Chelsea’s record provided they win their four remaining games.

Monday’s win earned the club and Ferguson, who has now won 49 club trophies in his managerial career, a 13th Premier League title.

“I’m so proud of everything I’ve achieved. I don’t get carried away, I don’t look back, only look forward,” he told MUTV.

“There is no reason why we can’t go on and improve for next year.”

Ferguson, who has secured some of his 13 championships in strange places over the years including at the gym, on the golf course and while watching snooker, would agree nothing beats doing it at Old Trafford with “champions” ringing out.

Fans had already stocked up on T-shirts, scarves and flags emblazoned with “20” before the game knowing they were unlikely to need a refund and their faith was justified with less than 90 seconds on the clock.

Rooney’s diagonal ball from his own half found Antonio Valencia on the right wing and the Ecuadorian passed to Rafael who crossed to Ryan Giggs with the 39-year-old pulling the ball back for Van Persie to tap in with ease.

The Dutchman could have scored a second a minute later when he volleyed just over, while Rafael hit the post before Van Persie produced a candidate for goal of the season to double their lead in the 13th minute.

Another superb pass from Rooney from just inside his own half set up Van Persie for an exquisite left-foot volley from just outside the box that flew past helpless Villa keeper Brad Guzan and into the net.

His third, on 33 minutes, again involved Giggs who was fed by Shinji Kagawa before finding Van Persie in the box. The Dutchman had time to shift the ball on to his left foot before sending it in off the post for his 24th league goal of the season making him the league’s top scorer.

“The important thing was to win the game and we won the game. It was great to score so early,” Van Persie told Sky Sports.

“I feel very happy, but it’s weird you know, I have waited so long for my first title – but it’s a great feeling.”

Villa, desperate for damage limitation in their relegation battle, did a better job of containing United in the second half and Van Persie was called on to demonstrate his worth at the other end of the field with a headed clearance off the line.

Kagawa missed a chance to give United a fourth, inexplicably firing high and wide, but that will be forgotten as the party gets into full swing.

Television pictures from the club’s in-house MUTV station showed the players spraying champagne around the dressing room and jumping up and down on the benches.

While the celebrations are likely to carry on into the night, United’s players will not get their hands on the trophy for another three weeks as it will not be presented until their final home match of the season against Swansea City on May 12.

United, who have 84 points to City’s 68 with their neighbours having played one game fewer, head to Arsenal in their next match on Sunday where they can continue the party in front of Van Persie’s former team mates.

Asked what he thought about going back to the Emirates as a champion with United, Van Persie replied: “Let us enjoy tonight first.”

It was fitting that the goals came from the man whose hot form has driven United’s season.

His arrival in the close season from Arsenal was a signal that Ferguson would be true to his vow that his side would never again miss out because they had not scored enough goals.

Van Persie’s treble against a young Aston Villa team, who remain a perilous three points above the relegation zone with some damage to their goal difference, took him above Liverpool’s Luis Suarez on top of the scoring charts.

The debate will rage over where this United team fits in among Ferguson’s great sides of the past, with this crop sometimes criticised for not living up to the likes of the 1994 double-winners or 1999 treble winners.

There will be few, however, that would argue about Van Persie’s place among the Old Trafford greats. DM