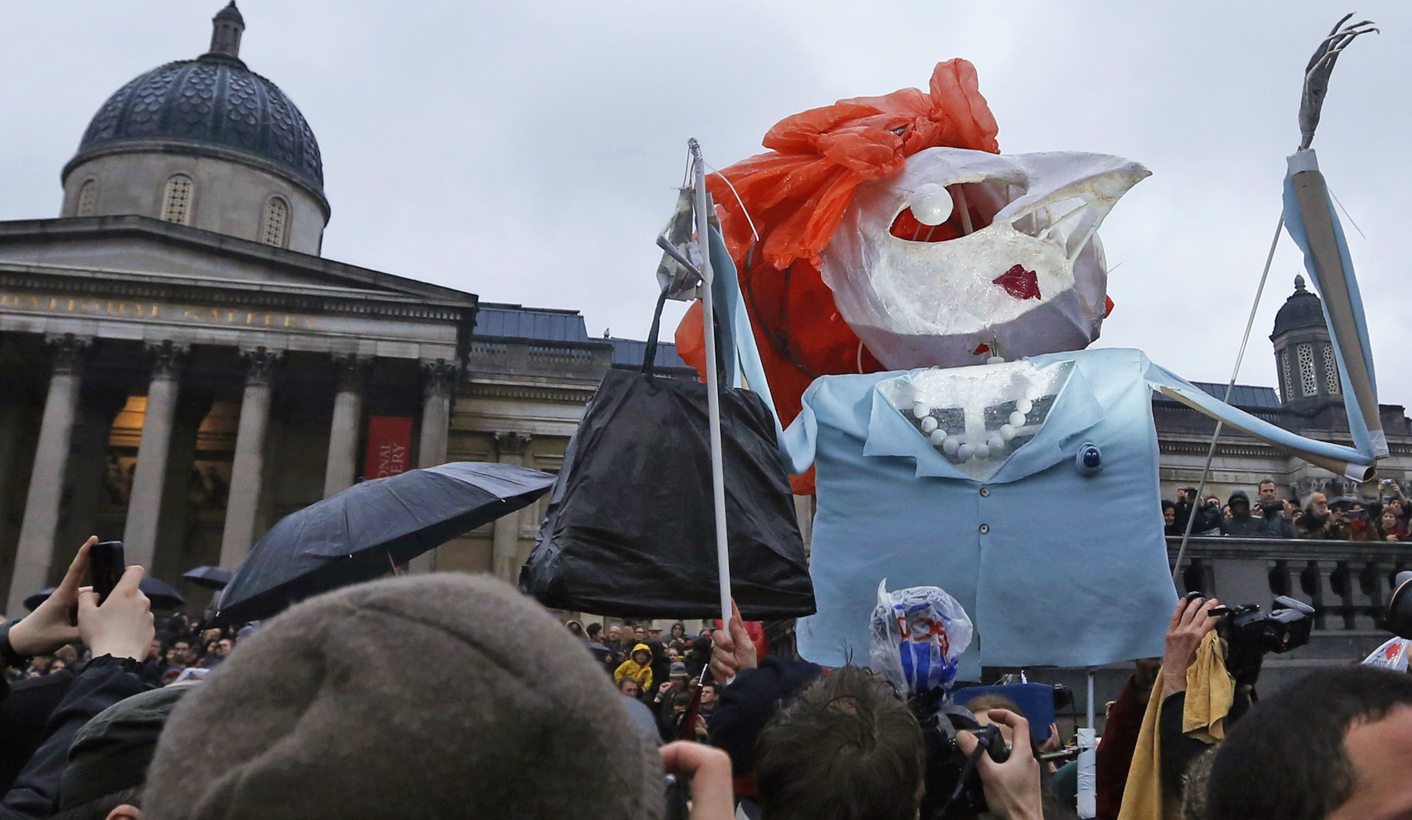 A campaign by opponents of late Prime Minister Margaret Thatcher to get the song "Ding Dong! The Witch Is Dead" to the top of the British pop charts to celebrate her death failed on Sunday although it did manage to reach second place. By Michael Holden.

Thatcher, who died aged 87 on Monday, deeply divided Britons and while some have paid warm tributes to the achievements of her right-wing Conservative governments, others said her privatisation of swathes of industry had destroyed communities.

That opposition was manifested in a Facebook campaign to propel the witch song, from the 1939 film “The Wizard of Oz”, to number one in the charts, provoking anger from politicians of all parties, right-leaning media, and members of the public.

The Official Charts Company said 52,605 copies of the song had been sold, but that was about 6,000 shy of the chart-topping track “Need U” by British DJ Duke Dumont and singer A*M*E.

The top 40 best-selling singles are played weekly on BBC Radio but the broadcaster said on Friday it would only pay a five-second clip of the song as part of a news item, leading to accusations it had caved into political pressure.

“I understand the concerns about this campaign. I personally believe it is distasteful and inappropriate,” BBC Director-General Tony Hall said in a statement.

“However, I do believe it would be wrong to ban the song outright as free speech is an important principle.”

Meanwhile, a rival campaign by the former premier’s supporters to promote the 1979 single “I’m In Love With Margaret Thatcher” by punk band the Notsensibles fared less well, debuting in 35th place after sales of 8,768.

Since the death of the “Iron Lady”, many of the divisions which characterised her time in office from 1979 to 1990 have resurfaced.

In addition to the witch song campaign, several hundred people held a “party” to mark her death in central London, chanting, drinking champagne, and waving an effigy of the leader they despised.

More protests are expected on Wednesday when a ceremonial funeral with military honours is held at St Paul’s Cathedral after her coffin is taken on a procession through central London – a tribute usually reserved for senior royal family members.

“This needs to be a fitting event for a very great lady,” Francis Maude, a minister who served under Thatcher and is responsible for the ceremony’s arrangements, told Sky News.

“It’s a free country and people must obviously be free to express their views. I would simply ask that they respect the wishes of the mourners of which there will be very many for this event to take place in a dignified and seemly way.”

But the cost to the public purse of the ceremony, estimated by commentators at 10 million pounds ($15.4 million), has been widely criticised at a time the Conservative-led coalition government is making deep spending cuts to cut a budget deficit.

According to a poll, 60 percent of those surveyed thought it should not be funded by taxpayers. Tim Ellis, the Anglican Bishop of Grantham, the eastern English town where Thatcher was brought up, said the grand ceremony was unwise.

“In a context where there is great ill-feeling … about her legacy, to then actually have a situation where we seem to be expecting the nation to glorify that with a 10 million pound funeral, I think any sensible person would say that’s asking for trouble,” he told BBC TV.

Police have said they are prepared for any trouble which could come from anti-capitalists and anarchists with a long record of violent protest in the British capital.

David Ison, the Dean of St. Paul’s who will officiate at the ceremony, said he could understand “the hurt and the anger that people want to express about the legacy” but said her funeral should be respected.

“Mrs Thatcher is not a witch or a monster,” he told BBC TV. “She’s a human being like the rest of us and part of what of we need to do in a funeral is put things aside.” DM

Photo: A puppet made to represent the late former British prime minister Margaret Thatcher is carried through the crowd at a party in Trafalgar Square to celebrate her death in central London April 13, 2013. REUTERS/Olivia Harris