South African troops fighting M23: It’s not all about us 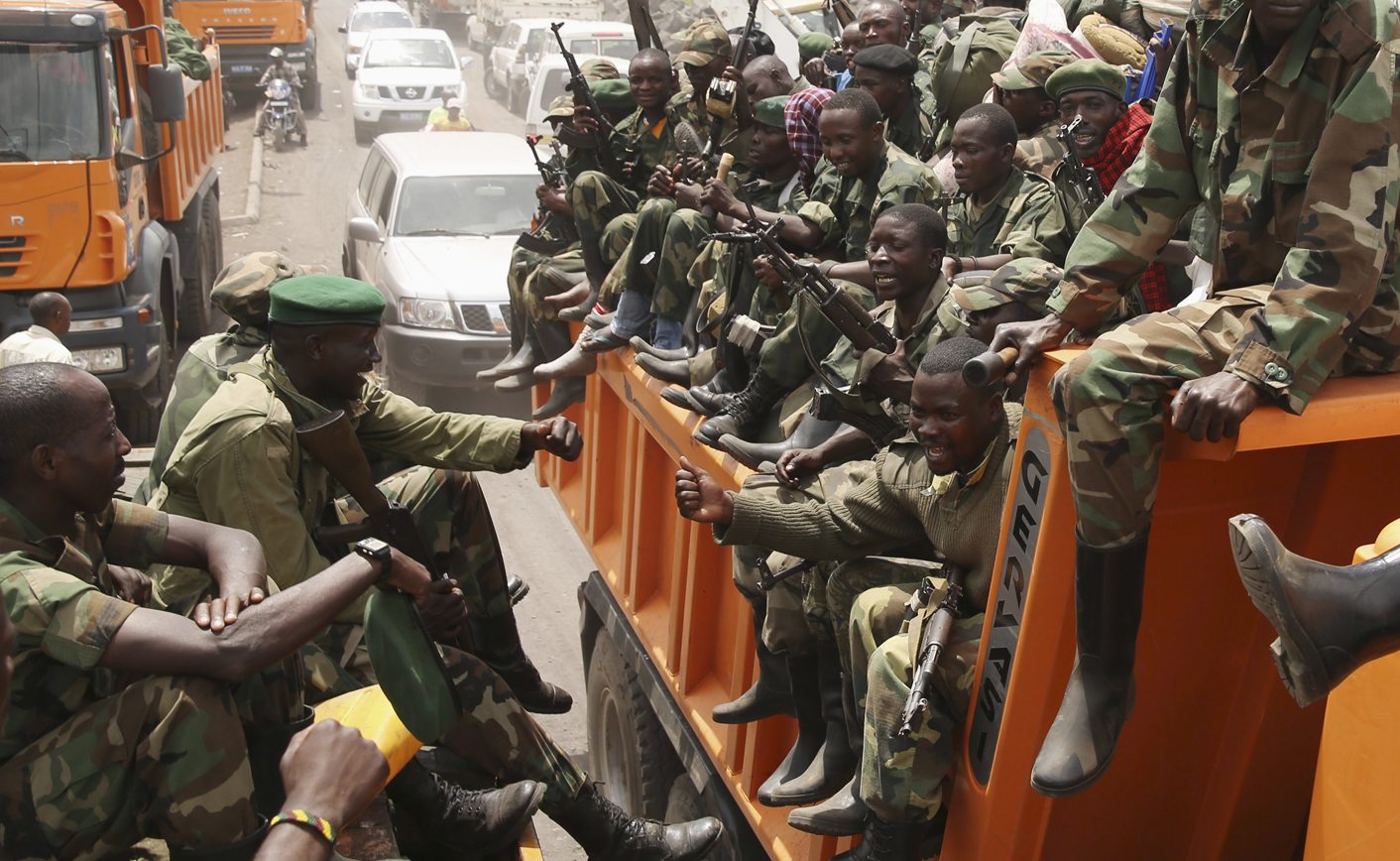 South Africans have understandably reacted with consternation to the news that the country’s armed forces will soon be at war against the M23 militia in the eastern region of the Democratic Republic of Congo. After the loss of 13 South Africans in combat in the Central African Republic, you’d forgive South Africans for expressing their anxiety at the latest military adventure across our borders. The reservations of South Africans about the involvement of the country’s troops, however, belie the greater problems attached to the formation of the United Nations brigade to fight the M23. By KHADIJA PATEL.

“As our former Chief of Staff of our glorious Umkhonto Wesizwe, a decorated soldier himself, had he been alive today, Comrade Chris Hani would have praised our soldiers who gallantly gave their lives in the Central African Republic for a peaceful, better and prosperous African continent,” the ANC said in its statement commemorating the anniversary of the death of Chris Hani on Wednesday. And even while Hani’s widow, Limpho Hani, told Redi Tlhabi of 702 that invocations of Hani that seek to speculate what the late Communist Party leader would have thought or done had he been alive today are unfair to his memory.

South Africans, however, continue to invoke Hani in this way – understandably, perhaps, considering that he is an undisputed giant of South African history.

The news of the death of South African soldiers in CAR triggered a realisation of the robust role South Africa seeks on the rest of the continent.

The ambitions of South African foreign policy are expressed in the list of the current deployments of South African troops across Africa. The SANDF is currently deployed in Ethiopia, Burundi, Sudan, DRC and Mozambique. The defence force is also fighting pirates, or at least guarding our waters from anybody (read Somalis) with ambitions towards piracy this far south of the Indian Ocean.

Last month the United Nations Security Council decided to mandate an “intervention brigade” to “neutralise and disarm” armed groups in the eastern DRC. To this end, South Africa has already committed troops and by many accounts have them waiting for instructions in Uganda.

A UN Security Council diplomat, however, revealed to Reuters that the principle purpose of the intervention force would be to “search and destroy the M23 rebels and other armed groups” in the country. The official, who declined to be named, confirmed the worst fears of the M23 movement, whose political leader Bertrand Bisimwa at the weekend warned the UN that by attacking the M23, the world’s body would be choosing war instead of peace – and that it would be at war with the Congolese people.

Last week, an open letter from the M23 implored the Parliament and people of South Africa “to consider and convince the government not to send their sons and daughters of their good nation in an absurd war against their Congolese brothers.”

South African people may be willing to listen to the rebels, lest our borders are mowed down by zealous rebels from up north. Government, however, is not inclined to listen. Last week, minister of International Relations and Co-Operation Maite Nkoana-Mashabane made it clear that the South African government would not heed the demands of rebel groups.

“Consequently, the M23 has no responsibility in this mutual massacre, which seems to be programmed just to please those who, from their air-conditioned skyscrapers in New York offices, whom have nothing but contempt and ignore our values and our pan-African beliefs,” the rebel group warned.

The population of South Africa has not been the only recipient of an open letter from the M23 rebels and its cohorts.

The rebel group also sent an open letter to US President Barack Obama, warning that a war between the United Nations and M23 would result in “among other wanton consequences, that of turning the entire Great Lakes region of Africa into a mammoth fireball, and the world far adrift will register in no small way adverse consequences thereof”.

The M23 is probably the best organised of the several dozen armed groups in the eastern Congo. They are said to number several thousand and last November they demonstrated their prowess – and disillusionment with the central government – by wresting control of the eastern region’s largest trade hub, Goma.

The M23 is different in many ways from other rebel groups. Its officers, who stem largely from the ethnic Tutsi community, are well trained and well adjusted to the strains of war. The group also has at least two websites, a radio station and a political wing.

With the aid of a tired turn of phrase, the M23 rebellion is actually a symptom of a far greater underlying condition. People of the eastern Congo, like many others across the DRC, are said to have little faith that Kinshasa will ever do anything for them. Congolese president Joseph Kabila was re-elected in 2011 in an election that was slammed around the world for being far from free, or fair. South Africa stood by Kabila’s re-election. Kabila’s government, however, has still done little to tackle the deep-rooted rot of corruption and patronage politics that ails the country.

Thus far, the United Nations has not been able to address the root causes of conflict in the DRC despite its best, and most expensive, efforts.

The UN peacekeeping force for the DRC, Monusco (which includes about 2,000 South Africans) was previously mandated to protect Congo’s civilians, with 19,000 men in uniform at a cost of $1.4 billion a year. It is the world’s biggest and most expensive peacekeeping operation. Monusco did little except watch as M23 took Goma last November.

As the Daily Maverick’s Simon Allison explained earlier this week, “Monusco’s mandate was extended by the UN Security Council to March 2014, and altered quite dramatically to incorporate an ‘intervention force’ which is empowered to go on the offensive against rebel groups if necessary. The extra troops being committed by South Africa – possibly as many as 1,000 men – will be part of this new intervention force.”

Meanwhile, this week a new round of talks between the Congolese government and the M23 began in Kampala. They are meant to discuss issues related to the political situation in the country as well as security and socio-economic issues. The Congolese government entered the talks this week expecting the rebels to lay down their arms for fear of the UN intervention brigade.

Others are not so confident about the UN’s strategy. They believe the UN is encouraging the Uganda talks to ensure an exit strategy for the intervention brigade once it fails its mandate.

And in the morass, there are renewed fears that M23 may well launch a new campaign to retake Goma.

This is all relevant, and it is necessary.

It is, however, equally relevant and necessary to realise that the fight we’re getting into is about a lot more than our involvement. The only way to bring peace, sustainable peace, to the Congo, is to address the root causes of conflict in the east of the country. DM

Photo: M-23 rebel fighters are transported on trucks as they withdraw from Goma December 1, 2012. REUTERS/Goran Tomasevic