A man who may warn ya, alarm ya and disturb ya: Andile Mngxitama 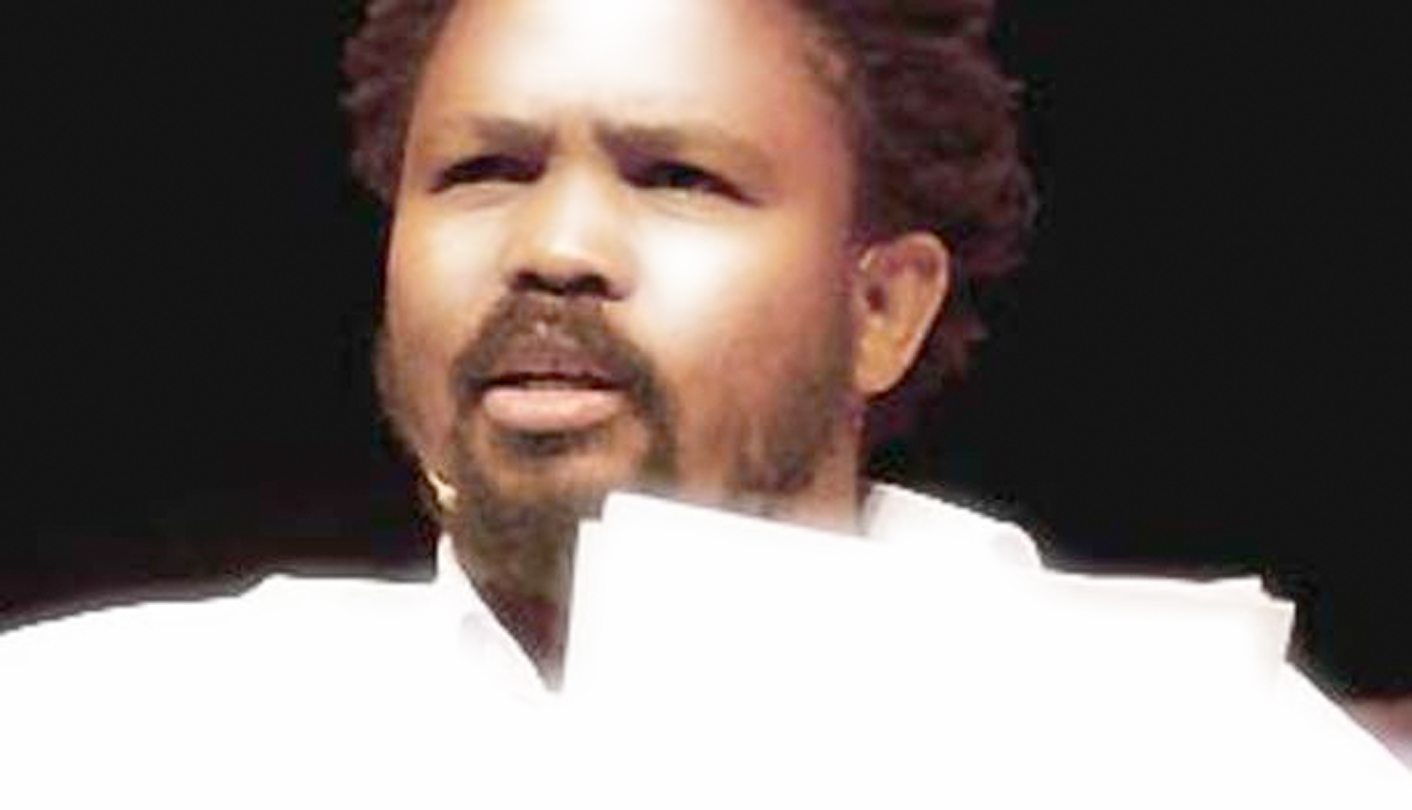 Writer Andile Mngxitama is no stranger to controversy: in fact, he seems to actively court it at every turn. But many are saying that Mngxitama has crossed a line in his calls on social media for violence to be inflicted on activist (and Daily Maverick contributor) Jared Sacks. By REBECCA DAVIS.

It doesn’t take a lot to get Andile Mngxitama worked up. He has previously called 5fm DJ Gareth Cliff “the poster boy of post-1994 racism”; accused the DA Students’ Organisation (Daso) of “selling the politics of racism as anti-racism”; and taken to Twitter to label  renowned author Jonny Steinberg a “polite fascist”. In other words, earning Mngxitama’s disapproval is not the world’s most difficult task.

It was an opinion piece that Jared Sacks wrote for the Mail & Guardian over a week ago that attracted Mngxitama’s ire. Headlined “Biko would not vote for Ramphele”, the piece laid out Sacks’s views that Mamphela Ramphele’s political philosophies could no longer be said to be predicated on Biko’s theories of Black Consciousness. “She has replaced Biko’s profound concept of Black Consciousness with an airy hope of a ‘South African Consciousness’, a nationalism predicated on the denial of the realities of race,” Sacks wrote. “[Biko] genuinely believed in the black masses and in their ability to lead the revolution and collectively build a wholly new society. The mineworkers, shack-dwellers and farmworkers of this country stand diametrically opposed to everything Ramphele believes in.”

Sacks was one of many commenters who expressed scepticism about the launch of Ramphele’s new political party platform, Agang. Another individual who voiced cynicism was Mngxitama himself, who wrote on Twitter shortly after Ramphele’s February announcement: “The tragedy of Agang is its ideological slant is its ideological slant. We don’t need another neo-liberal gang. The ANC and DA have done enough damage already.” Furthermore, in the run-up to Agang’s launch, Mngxitama made comments to the Guardian expressing extremely similar views to those of Sacks on Ramphele: “She’s linked to the white capital mining sector,” Mngxitama said. “She can’t claim to be part of black consciousness.”

Despite the overlap in their positions on this matter, Mngxitama took great offence to the piece written by Sacks. As the GroundUp website reported on Monday, Mngxitama took to his Facebook page to vent his frustrations on the same day that the article by Sacks was published online.

“I don’t easily call for physical violence but I believe if there are any real Bikoists out there whenever we see that white little bastard called Jared Sacks we must beat the shit out of him,” Mngxitama wrote. “They are now pissing on Biko’s face. They can diss Mamphele all they want, but to insult us like this? When I see Jared he must beat me up. That’s the deal.”

In response to comments on his post, he added: “I know this white boy. He goes to the township, fucks up community organisations, and now he is fucking with Biko and BC. No! This is not a joke. He better be prepared.” Mngxitama commented further: “I’m black consciousness bruh and I know what white arrogance is. Jared will pay for this.”

Sacks – who is an independent journalist, social justice activist, and founder of the NGO Children of South Africa – told the Daily Maverick that he didn’t want to comment on the matter or get involved. But a number of activists and commentators have taken up cudgels against Mngxitama since GroundUp reported on the Facebook rant. The likes of Zackie Achmat, Jane Duncan, Ayanda Kota and Nathan Geffen put their names to a letter sent to the Mail & Guardian, accusing Mngxitama of “downright unethical” behaviour in threatening Sacks with violence on a public platform.

“To want to settle a political dispute through a physical fight, which is what Mngxitama calls for on his page [accessible to more than 5,000 people] is a terrible message for a public intellectual of Mngxitama’s stature to be communicating,” the letter read. “Mngxitama comes across as a bully who can only win arguments by policing the boundaries of the discourse on black consciousness through intimidation, rather than through robust argument. It is also important that the M&G speak on this issue as well, denouncing Mngxitama’s threat of violence, to protect the freedom of its contributors and to communicate a clear message that such threats are unacceptable.”

Mngxitama, who holds an MA in Sociology from Wits, works at the Foundation for Human Rights as a policy advisor. The foundation’s director, Yasmin Sooka, told GroundUp: “The foundation does not condone violence or the incitement to violence and/or the expression of hate speech. We intend to investigate the matter fully and to take appropriate action that may be necessary.”

When the Daily Maverick contacted Mngxitama on Monday evening, he made reference to Sooka’s statement and said: “I’m not sure whether I should be talking to you. This matter is now one for my employment, and I need to deal with it internally.” He did add, however, that his anger at Sacks was due to “the quiet violence of liberalism”, and advised us to visit the Cape Town gallery where artist Ayanda Mabulu is currently exhibiting a painting of a white pig urinating on the head of Steve Biko.

Mngxitama made this same comparison – between the piece by Sacks and Mabulu’s canvas – in a letter he co-authored with Athi Joja to the Mail & Guardian a few days ago. In the letter Mngxitama makes it clear what his real issue with Sacks is: that Sacks dares to claim that he understands black consciousness. “We don’t need Sacks to talk on our behalf, nor shall we allow him to insult Biko’s name and philosophy,” the two write.

Mngxitama in this instance writes as if it is Sacks’s whiteness which renders him an improper figure to discuss Biko. But it seems increasingly clear that Mngxitama simply considers himself as Biko’s lone true heir; the one man who truly grasps black consciousness in a country full of false worshippers. He has repeatedly expressed his belief that Biko’s legacy is being misinterpreted and put to dubious ends. “Each year, Biko’s memory is appropriated to serve anti-black agendas,” he wrote last year. “His philosophy needs to be defended and elaborated by true Bikoists.”

In Mngxitama’s book, it’s hard to know who else counts as a true Bikoist other than the man in his mirror. You might recall the spat that played out in the Mail & Guardian last year between Mngxitama and Xolela Mangcu, who made the mistake of bringing out Biko: A Biography. Not on Mngxitama’s watch: he promptly denounced the work in a scathing review. “Mangcu’s grasp of black consciousness is too limited to allow him the scope to deal with Biko in a satisfactory manner,” Mngxitama wrote.

(Mangcu hit back: “[Mngxitama] wishes he had written this particular biography. Thank God he didn’t; it would have been an ‘intellectual design to deceive’.”)

These kinds of literary feuds are rather fun for anyone not directly involved. But there are those who don’t see Mngxitama’s contrarianism as funny. He has been accused of bullying before, and he has also been accused of doing precisely what he accuses everyone else of doing: using his individual interpretation of Biko’s views to fuel his own agenda. The Daily Maverick’s Khadija Patel made reference to this in February. “After I interviewed Mngxitama in 2011, on the anniversary of Biko’s death, another disgruntled Bikoist complained to me that Mngxitama perverted the views of Biko to further his own ends,” Patel wrote. “This person contended that only the Steve Biko Foundation should be considered the official representatives of Biko in the current day.”

But even if our views on Biko may differ – as they inevitably will when the contested person is no longer around to represent themselves – it would be nice to think that we could restrain our dissenting opinions to letter-writing and column pontification, rather than calling for fisticuffs. Mail & Guardian editor Nic Dawes summed it up on Twitter on Monday afternoon: “Wherever you stand on the politics of BC and social movements, threats of violence over an M&G op-ed are wrong.” DM