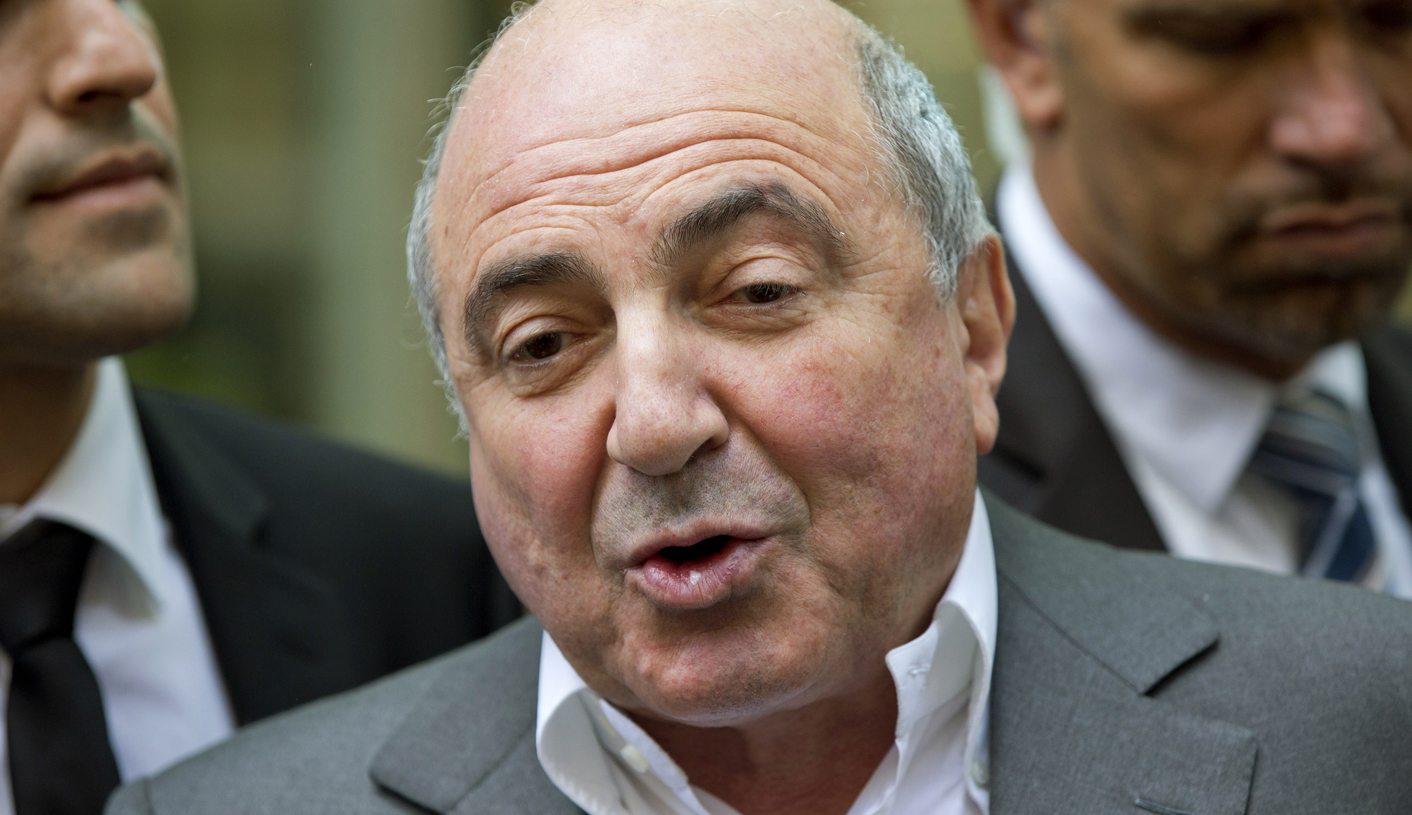 It’s never wise to be a Russian in London, a city that functions as a shopping outpost for the hyper-wealthy oligarch set – a place to buy Hermes bags, sprawling estates and football teams. On Saturday, Russian über-oligarch Boris Abramovich Berezovsky was found dead in his home. As if it wasn’t going to end this way. By RICHARD POPLAK.

For a man who basically bankrolled Vladimir Putin’s rise to power in 2000, and paid for the upstart Unity Party – a political outfit of no known ideology – Boris Berezovsky sure wasn’t popular in Russia. In fact, he wasn’t allowed into or near Russia, a country that he was so instrumental in shaping following the fall of communism. Berezovsky was one of those Forrest Gump figures who had his finger in every major Russian power play of the last two decades, from the rise of the oligarchs, the era of Yeltsin, the changeover to Putin, the war in Chechnya, to the foundation of a gangster capitalist economy – all of it. Scour recent Russian history, and Berezovsky’s fingerprints are all over it.

There is but one country on earth where a Jewish mathematician of humble means can emerge from the wreckage of a fallen system as an Orthodox Christian oil, television, airline billionaire who basically runs the government. That country would be Russia. Berezovsky earned his wealth and his influence by taking advantage of hyperinflation, and skimming profits off Russia’s largest carmaker. In 1994, he survived a car bombing – Russia’s gentle way of saying, “Welcome to the elite. You’ve arrived!”

The Federal Security Service of the Russian Federation’s (FSB) investigation into the bombing was led by none other than Alexander Litvinenko, another Russian who died in London – in his case, by famously succumbing to Polonium poisoning. By this time, Berezovsky was heavily inveigling himself with the Yeltsin camp through a newly acquired stake in the failing Soviet television station ORT. The station went to bat for Yeltsin, and Berezovsky found himself in tight with the future president’s influential daughter, Tatiana Borisovna Dyachenko. Along with other members of the so-called “Davos Pact” (they hatched their plot at, where else, the World Economic Forum in 1996), he helped acquire a war chest worth over $200 million.

These were the happy times of the notorious “loans-for-shares” privatisation auctions, where the oligarchs went from being merely loaded to becoming the richest men in the world. Berezovsky jumped into the Sibneft oil company, along with ex BFF Roman Abromovich, and managed to acquire a controlling share in the state airline, Aeroflot.

By 1998, Berezovsky was the centre of a very Russian outfit called “The Family” – a cabal of Yeltsin-ites who were looking for a successor to block the aspirations of Yevgeny Primakov, who was leaning commie and threatened to bring the whole house of cards down. They found the perfect foil in an obscure ex-KGB hack named Vladimir Putin – who had once helped a Berezovsky associate set up a car dealership in St Petersburg when he was aide to the mayor. ORT TV turned Putin into a saint, and by spring 2000, he was the president of Russia.

Which is where things should happily end – with Berezovsky worth over $3 billion, happily ensconced in the Duma. But he couldn’t help but note that the monster he had helped create was, indeed, a monster – one who wasn’t interested in playing a puppet. When Berezovsky quit the Duma over a Putin motion to have state governors appointed by the Kremlin, rather than elected by the people, Putin got angry. He made it clear that he would no longer tolerate criticism from media organs controlled by the oligarchs. “The state has a cudgel in its hands that you use to hit just once, but on the head,” said Putin. “We haven’t used this cudgel yet. We’ve just brandished it. [But] the day we get really angry, we won’t hesitate to use it.”

Berezovsky, prudently, made for London, and his associate Badri Patarkatsishvili wrote the New York Times the following plaintive note:

“The shutting down of independent TV by the Kremlin (‘Silencing Critics of the Kremlin,’ editorial, Jan. 23) follows the tactics of the Peruvian strongman Alberto K Fujimori. In 1997, the owner of Frecuencia Latina TV, Baruch Ivcher, lost his station and was slapped with an international arrest warrant after broadcasting critical reports about the Peruvian secret service. Similarly, the Russian Federal Security Service – the real power behind President Vladimir V. Putin – declared war against NTV and TV-6 for reporting on carnage in Chechnya. Thus, Boris A Berezovsky, Vladimir V Gusinsky and I, owners of the independent Russian networks, are living abroad and are facing extradition requests on trumped-up charges. But the analogy does not end there. As it happened, Mr Fujimori’s government collapsed; his security chief, Vladimiro L Montesinos, is facing trial; and Frecuencia Latina was returned to its rightful owner. Likewise, the Russian people will eventually reject the transformation of their country into a banana republic.”

That turned out to be a bit of a misreading, although Russia is indeed well on its way to becoming a banana republic. Berezovsky, meanwhile, lived out his days the way oligarchs in London do – by having bodyguards and driving Mercedes. Oh, and by engaging in lawsuits. The self-inflicted cudgel blow came when Berezovsky filed Britain’s largest ever claim against his old friend Abromovich – he wanted over $3 billion for what he claimed was a share of Sibneft he hadn’t been paid for. The case, which enriched lawyers to the tune of almost a quarter of a billion dollars, was laughed out of court by the judge, who had nothing positive to say about Berezovsky’s character.

It had all gone pear-shaped, with jilted exes suing for damages, and the money pouring out faster than it had come in. Berezovsky even penned a letter to Putin, asking for forgiveness that he had to know would never come. As of this writing, it appears that Berezovsky ended his own life in his Berkshire, although the chemical hazard police were brought in to make sure he didn’t die like Russian exiles tend to – poisonously.

It was never going to end another way, and it didn’t. Sadly, the average Russian still has Russia to deal with. That was never something Berezovsky ever seemed to have in mind. DM

Photo: Russian oligarch Boris Berezovsky speaks to members of the media after losing his court battle against Roman Abramovich, at a division of the High Court in London August 31, 2012. Chelsea Football Club owner Abramovich won a court battle on Friday against Berezovsky, a former business partner who had sued him for billions of dollars over claims he was intimidated into selling prize assets at a knockdown price. REUTERS/Neil Hall.