Obama Says Iran More Than A Year Away From Nuclear Weapon 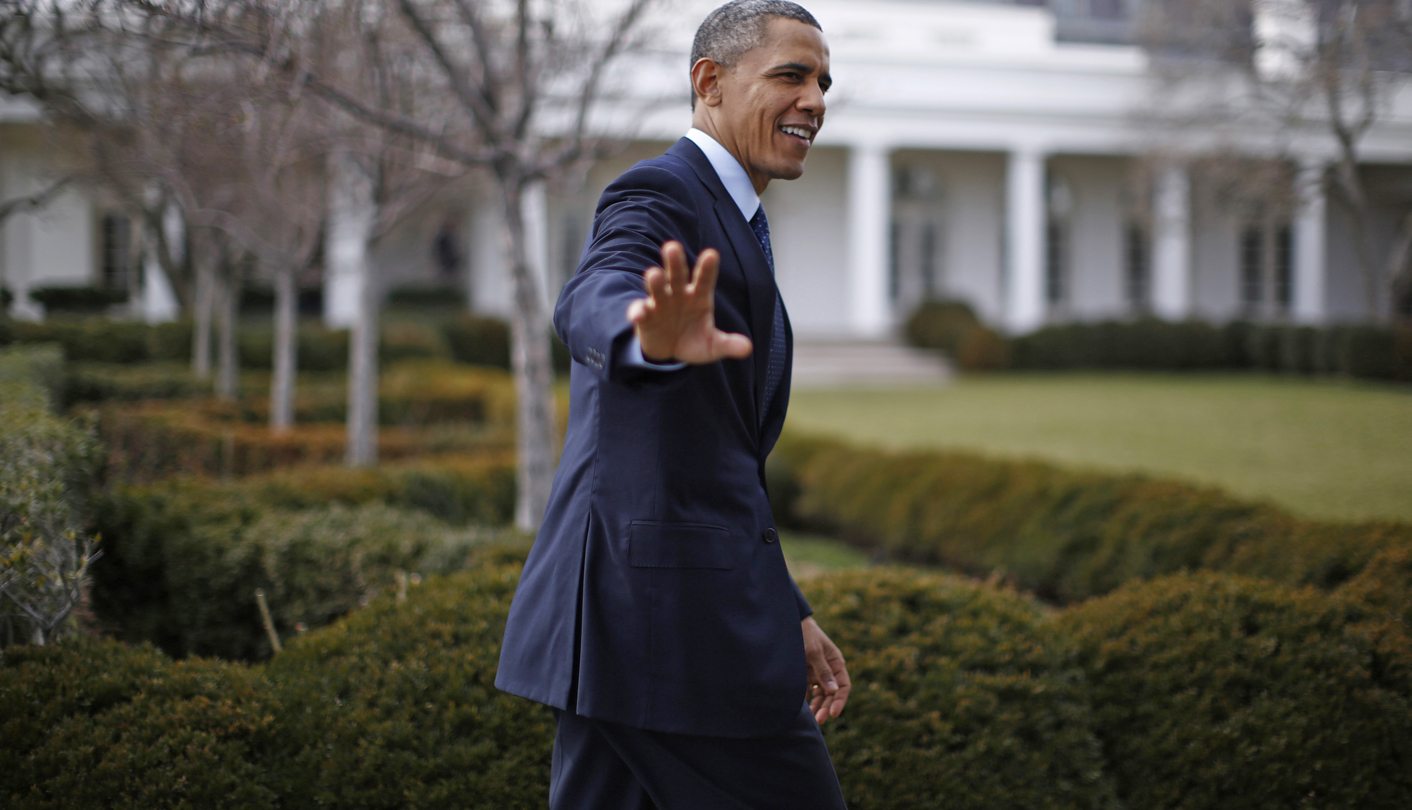 President Barack Obama told Israelis Iran is still more than year away from developing a nuclear weapon and sought to reassure them that military force remains a U.S. option if sanctions and diplomacy fail to thwart its nuclear ambitions. By Ari Rabinovitch and Matt Spetalnick.

In an interview with Israeli television broadcast on Thursday, just six days before his visit to the country, Obama appeared to send a message to Prime Minister Benjamin Netanyahu of the need for patience with Washington’s Iran strategy while also showing U.S. resolve to confront Tehran if necessary.

Iran’s nuclear standoff with the West will be high on the agenda during Obama’s first presidential trip to the Jewish state, where he faces a tough challenge trying to narrow his differences on the matter with the right-wing prime minister.

Laying the groundwork for his talks with Netanyahu, Obama took the rare stsep of offering a U.S. assessment of how long it would take Iran to build a nuclear bomb should it make the final decision to pursue one. Tehran denies that is its aim.

“We think that it would take over a year or so for Iran to actually develop a nuclear weapon, but obviously we don’t want to cut it too close,” Obama said.

Netanyahu, at the United Nations in September, set a “red line” of spring or summer for when Iran would be close to weapons capability, suggesting prospects for an Israeli attack around that time. But Iran’s latest talks with world powers plus adjustments in Tehran’s uranium enrichment processes are widely thought to have pushed back that deadline.

“The United States obviously has significant capabilities but our goal here is to make sure that Iran does not possess a nuclear weapon that could threaten Israel or could trigger an arms race in the region,” he said.

Obama and Netanyahu have had a notoriously fractious relationship, but with both leaders starting new terms they seem to have come to the realization that they are stuck with each other and have a chance to open a new chapter.

Obama will also try a different tack, using his three-day visit to reach out to a wary Israeli public and try to convince them of his commitment to their security. The centerpiece will be a nationally televised address to university students in Jerusalem on Thursday.

All signs are that Obama hopes the strategy will give him more leverage with Netanyahu, weakened by January’s election in which centrists made surprising gains against his right-wing bloc, to pursue a peaceful resolution with Iran and eventually address the Israeli-Palestinian stalemate.

Obama acknowledged he and Netanyahu have had differences but insisted they shared a “terrific, business-like relationship,” often referring to the Israeli leader as Bibi, his popular childhood nickname.

Netanyahu only clinched a deal for a broader-based coalition on Thursday, and Obama said any breakthrough in peace negotiations with the Palestinians would be unlikely until the Israeli government stabilized.

Obama faces the challenge of overcoming Israeli suspicions that have lingered since his early days in office when he pressed Netanyahu for a freeze on settlement expansion and launched a short-lived outreach to Tehran, Israel’s arch-foe.

Touching on the long-stalled peace process with the Palestinians, Obama said his “goal on this trip is to listen” during meetings with Netanyahu in Jerusalem on Wednesday and with Palestinian President Mahmoud Abbas in Ramallah on Thursday. He will see Jordan’s King Abdullah in Amman on Friday.

Obama stopped short of calling for a freeze in settlement building in the occupied West Bank, but suggested a change in Israel’s policy would empower moderate Palestinian leaders.

“It’s a matter of both parties coming together and recognizing that their futures in some ways are going to be inextricably linked and that Israel will be safer, more secure, more prosperous if the issue can be resolved,” he said.

Previewing Obama’s trip, U.S. deputy national security adviser Ben Rhodes told reporters the president would not bring any “specific” new peace proposals but would use the opportunity to “take stock” of the prospects for future efforts. Obama’s first-term peace push broke down in 2010 amid mutual acrimony.

In an appeal to the Israeli people, Obama said he regretted that he would not have an opportunity to walk the streets. “Sometimes I have this fantasy that I can put on a disguise, wear a fake moustache, and I could wander through Tel Aviv, go to a bar, and you know have a conversation there,” he said.

Obama will see the Dead Sea scrolls in Jerusalem and a high-tech exhibit in the Israel Museum.

He will lay wreaths at the graves of Theodor Herzl, the founder of modern-day Zionism, and assassinated Prime Minister Yitzhak Rabin and visit Yad Vashem, the memorial to six million Jews killed in the Nazi Holocaust. He will also visit the Church of the Nativity in the West Bank town of Bethlehem. DM