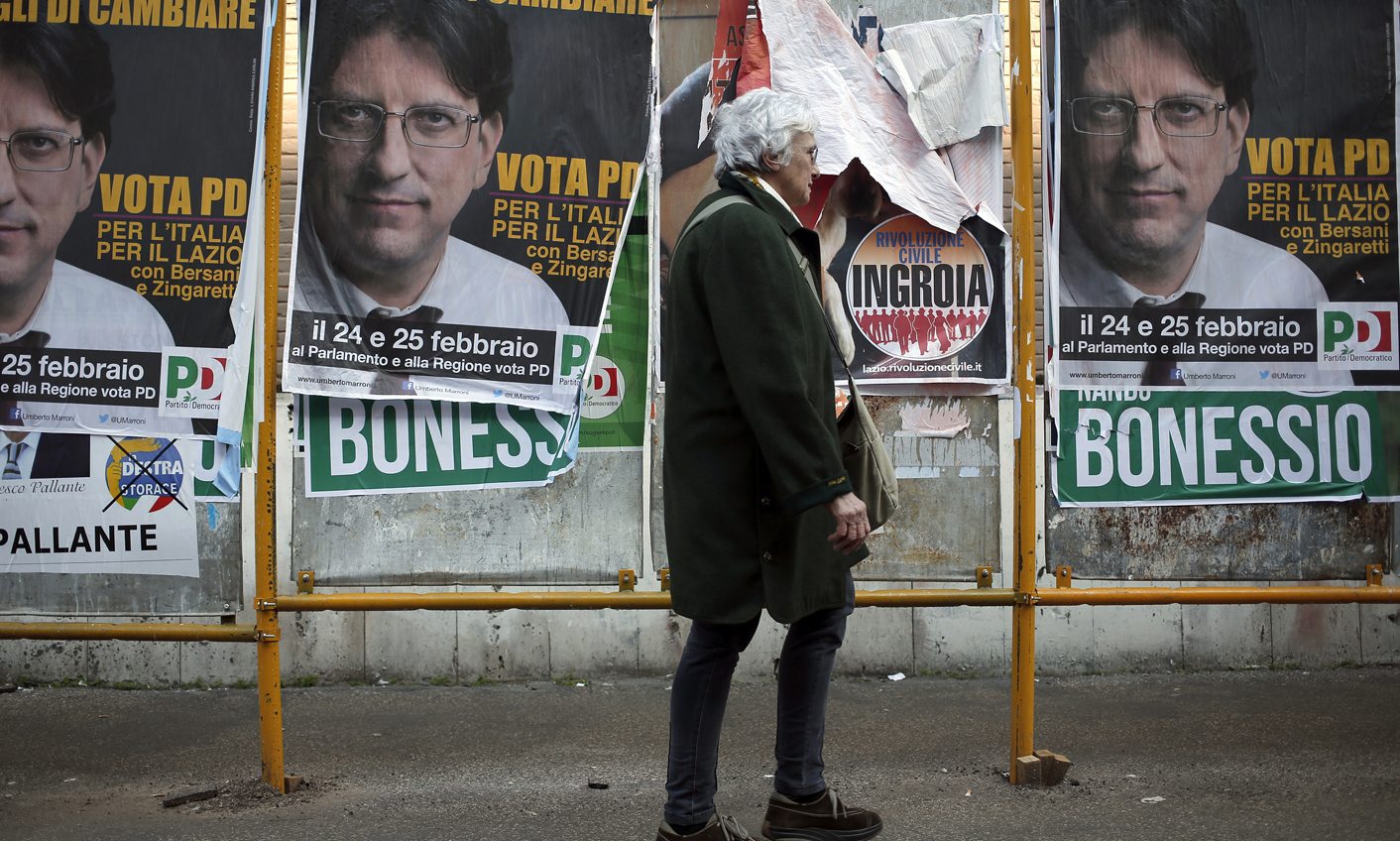 Italy’s Adam Sandler took most of the vote. Bunga-bunga man Silvio Berlusconi made a comeback, promising fake money from Switzerland in order to pay back an unpopular tax. Europe is pulling its hair out, wondering why the euro zone’s third biggest economy won’t accept choking austerity measures. In other words, business as usual in the First World’s future Somalia. By RICHARD POPLAK.

The filmmaker Matteo Garrone, who shot the superb Gomorrah in 2008, recently released his follow up. It’s called Reality, and it tells the story of a fishmonger from Napoli who goes insane waiting for a call from the producers of the reality TV show Big Brother.  Luciano, played by the non-professional actor Aniello Arena, is obsessed with the idea of fame, convinced that it can free him from the hustle that is life in the mafia run town that is all about connections. The film never goes in for Fellini-esque excess, which is telling about an Italian flick that deals with madness. Society in Italia has become so whacked out, so dysfunctional, that magic realism can’t compete with realism for sheer loonyness.

In many respects, Reality pairs nicely with the superb documentary Videocracy, which tells of the rise and, well, rise of Silvio Berlusconi, who was able to grasp the hearts and minds of regular Italians via his RIA channels, the lowest common denominator tits-and-ass TV that defines Italian pop culture. RIA was as much a political play as a cultural one: control the airwaves, and you control the country. Never has that been truer of a country than it has been in Italy.

Make no mistake: the third biggest economy in the euro zone is a basket case. Almost nothing redeemable has happened in Italy since the financial crash, which exposed the country as a mismanaged hellhole borrowing itself into oblivion. You think the Americans are in debt? Italy’s in the hole to the tune of 130% of GDP. The economy shrank 6.76% over the course of the recession, and now chugs along at about 1% growth, and not because of anything Italians have done. The euro zone has agreed to make continual purchases of weaker economies’ debt, which has allowed the whole house of cards to stay erect for the meantime.

We’ll see how long that lasts. The swing from teenage Saudi prince to austere nun-ishness happened overnight, mostly under the aegis of Mario Monti, a Brussels-minted economist and so-called “technocrat” who was tasked with slashing spending and increasing taxes. These were austerity measures imposed from outside that had no logical way of succeeding, much less of garnering popular support from actual Italians, none of whom voted for Morsi considering the fact that he was forced on them after the last Berlusconi regime fell to pieces in 2012.

Italy doesn’t work when it isn’t a democracy, and it doesn’t work when it is. This time out, 25% of the ballots were ticked in favour of Beppe Grillo, a former comedian whose Five Star Movement was exceptional for being both anti-austerity and anti-policy – the party has no real ideas except that it doesn’t like ideas. Grillo is a populist of the first order, and his outrage clearly found a conduit, but he is at best a clown, and at worst a demagogue. Time will tell.

Coming in at 30% of the vote was the videocrat himself, Shagger-in-Chief Silvio Berlusconi. With his wife, 50 years his junior, off shopping, he cast a vote in favour of himself, and promised to pay back – not just repeal by pay back! – an unpopular housing tax with money taken from Swiss tax shelters.

You may be thinking to yourself at this point: the Italians are not a serious people. Their caprice could topple the euro zone, but will more probably kick off a period of stagnation that mimics Japan’s – another notoriously wretched democratic sinkhole. The one small ray of light in Italy’s favour is the centre-left coalition leader Pier Luigi Bersani who, if he does cobble a coalition together, is not stupid enough to hold a bunga-bunga party to celebrate. Even if he does manage a coalition, it’s unlikely to hold. And an unwieldy Italy means an unwieldy Europe. And that does not help the global economy in the least.

Italy needs two things. The first is a Europe that understands that austerity measures, meted out with a technocratic fist, are not politically tenable. There needs to be some push and pull between stimulus and restraint, and an understanding that the future is something worth building towards. Brussels in general, and the Germans in particular, have been remarkably unthinking in their approach to both containing the bleeding and reforming the economic culture. It has been a disastrous failure of economists and politicians, many of whom fancy themselves one in the same.

Italy also needs a reasonable politician to take the helm. The political class has become so rotten that almost no amount of cynicism is too much. Berlusconi is an unmatchable fool, so clownish that he makes an actual clown look good. Beppe may be a populist flash in the pan, but he is more likely to be a force for years to come.

And none of this would matter if Italy didn’t matter. The country has made incredible leaps since World War II, transforming from an agrarian backwater with civilised tourist traps into one of the great industrialised economies producing some of the planet’s finest goods. Italy was Apple before there was an Apple – a place of high design and endless innovation. It was undone by a belief that the social contract was endlessly negotiable, and that the coffers would never run dry. Corruption, gangsters, idiots and fools came to the show. And while they’ve made out like the bandits they are, ordinary Italians are holding the empty wallet.

Sad as it may be, Italy is on the brink. And it may take Europe, and the global economy, down into Dante’s hell with it. DM

Photo: A person walks past ripped political election posters in Rome February 28, 2013. An Italian political crisis that has rattled the euro zone deepened on Wednesday when two party leaders ruled out the most likely options to form a government and avoid a new election. REUTERS/Yara Nardi