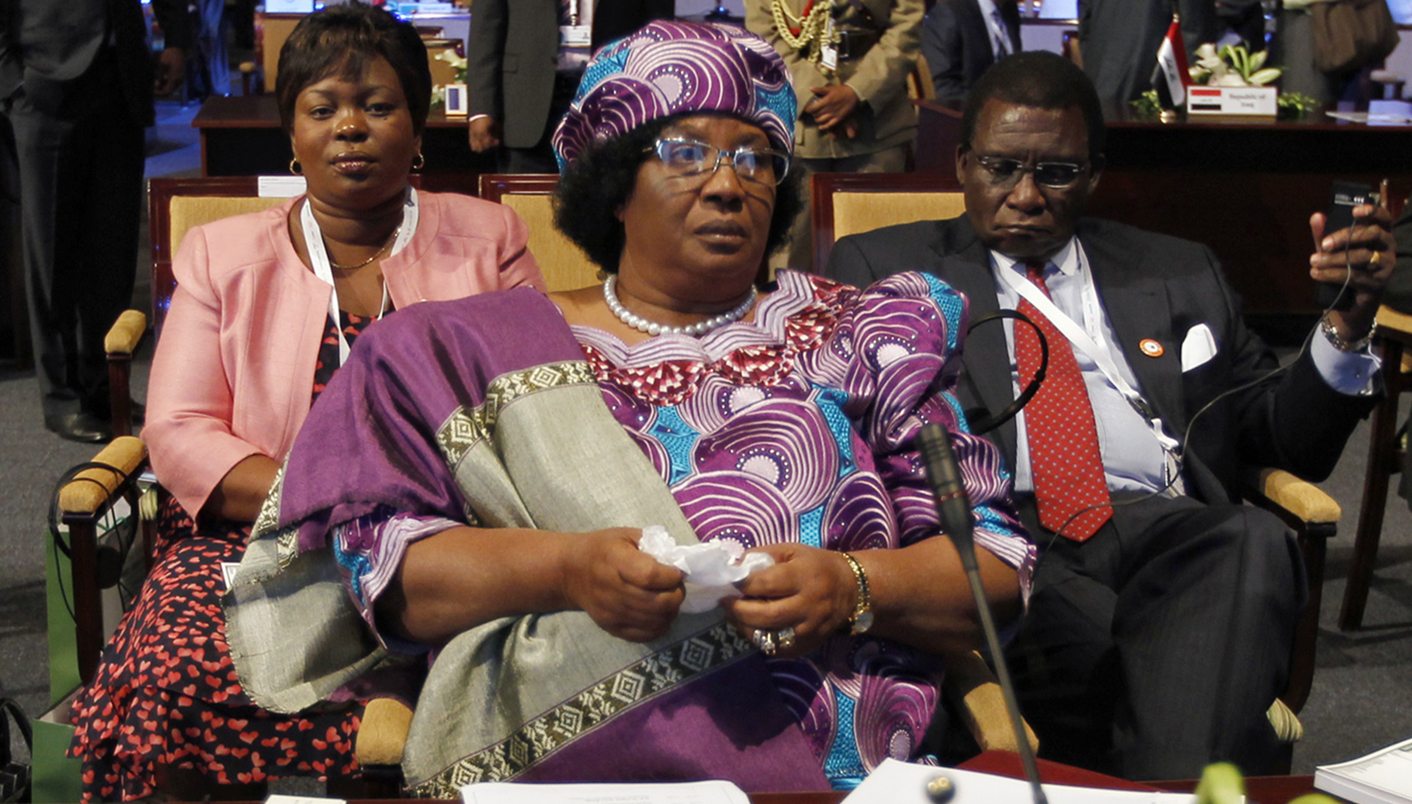 Malawi’s president is something of an international darling: she’s a woman, and she’s not her reviled predecessor. But now that Joyce Banda is in charge, it’s her job to sort out Malawi’s problems. The massive strikes currently crippling the country indicate that her people aren’t too sure she’s up to the task. By SIMON ALLISON.

Joyce Banda is in something of a dilemma. Malawi’s accidental president – she assumed power on the unexpected death of her predecessor Binguwa Mutharika, despite his attempts to freeze her out – is being lauded internationally for her efforts to turn her country’s economy around, while her citizens rebel against the harsh austerity regime that she’s imposed.

On Wednesday, this dilemma was starkly illustrated by two separate but related events. The first, and more encouraging of the two, was the visit of a team from the International Monetary Fund, who were in town to assess the pace of reform and pass judgment on Banda’s successes to date, in particular to check up on how Malawi is spending the vast some of money it has borrowed from the fund. And pass judgment they did.

“Overall performance under the programme has been satisfactory,” said team leader Tsidi Tsikata. “There are encouraging signs that economic recovery is under way, aided by increased availability of foreign exchange, including through the re-establishment of external credit lines. Improved price incentives for tobacco production and good rains so far this season are expected to boost agricultural output and overall growth of the economy in 2013.” Tsikata also praised Banda’s currency devaluation – one of her first major decisions as president – and urged her government to step up the pace of reform by cutting government spending even further.

In other words, the IMF is happy, for the most part. Tsikata did, however, raise a few concerns: “There is growing public outcry over falling living standards and perceived wasteful spending and fraudulent activities in the government sector. There have also been strikes by civil servants and other workers demanding higher wages…[the mission] discussed the scope for policy actions to stabilise the exchange rate and lower inflation.”

Tsikata referred to the strikes in the past tense, but this wasn’t exactly accurate. As he was delivering the IMF assessment so Malawi’s public servants were delivering their own verdict, and it wasn’t nearly as rosy. More than 100,000 public sector workers have been on strike since last week, unhappy with the price of living, the rampant inflation, and their pay. Workers are demanding a 67% pay increase, which government says it simply can’t afford. Negotiations, however, have broken down and the dispute is escalating: a two-day strike turned into a five-day strike which is now indefinite, and on Wednesday civil aviation workers joined the protest action and shut down the country’s airports.

And the protests haven’t all been peaceful. In the capital Lilongwe on Monday, 100 policemen clashed with striking civil servants on Capital Hill, firing teargas at workers to force them to disperse. No, this is nothing like the mass demonstrations which Malawi witnessed during the last months of Mutharika’s rule, but it is an unmistakeable message to President Banda that her honeymoon period is well and truly over.

Banda came to power last year to a chorus of praise and appreciation, both locally and internationally. For a start, she wasn’t Mutharika, whose increasingly erratic decisions were undoing all the good work he had overseen in his first term in office and swiftly ruining Malawi’s economy. Then there was the fact that she was a woman – only the second female head of state in African history – which is a remarkable achievement in its own right. Finally, she seemed determined to do the right thing. She unmade Mutharika’s more egregious decisions – selling the presidential fleet of luxury vehicles, for example – and seemed determined to make the tough economic decisions and restore donor funding.

But in the hype surrounding her appointment – Chris Gibbons in this very publication described her as “Saint Joyce of Malawi” – a few salient facts were overlooked. Yes, she may have fallen out with Mutharika, but she was still his pick as vice president. Yes, Malawi may have been agitating for new leadership, but ultimately she was not leading the opposition nor was she its preferred choice. Yes, she may have started a new party, but on Mutharika’s death she stuffed it with all the same plump, vacuous legislators who had previously pledged their life and soul to him.

She’s no saint, she’s a politician, and now she faces her biggest political crisis since she came to power. There’s widespread dissatisfaction with the harsh austerity measures being preached by the likes of the IMF and practised by the government, and even in some quarters a hankering for the return of the good old days of Mutharika. The civil service strikes are an unmistakeable symptom of this discontent.

“I have come to believe that President Joyce Banda is far removed from realities of the harsh times that we are going through in this country… one cannot help but shudder at the grim reality that this ship, which is sailing in turbulent waters, is captained by one who doesn’t even know where north is on the compass,” wrote columnist Madalitso Musa in Malawi Today. Musa pointed out that a litre of petrol cost 700 kwacha (almost R17), compared to just 300 kwacha when Mutharika was in charge – conveniently forgetting, perhaps, that petrol was almost impossible to come by in Mutharika’s last months. “With the stunted salaries that you and I receive it means survival will be by some divine providence, if you believe in any.”

With government coffers nearly empty, Banda doesn’t have much choice but to listen to the IMF, which controls the purse strings, and hope that the economy rights itself before public anger boils over. But she needs to convince her citizens that it is worth the long, hard wait.This is the first major test of her leadership. With presidential elections scheduled for 2014, her response could well determine if she can turn her accidental presidency into one she’s earned – and prove herself worthy of the international adulation. DM

Photo: President of the Republic of Malawi Joyce Banda attends the World Energy Forum during the first day of the programme at the Dubai World Trade Centre October 22, 2012. REUTERS/Jumana ElHeloueh