‘In Whom Can I Still Trust’: The Holocaust’s pink triangle 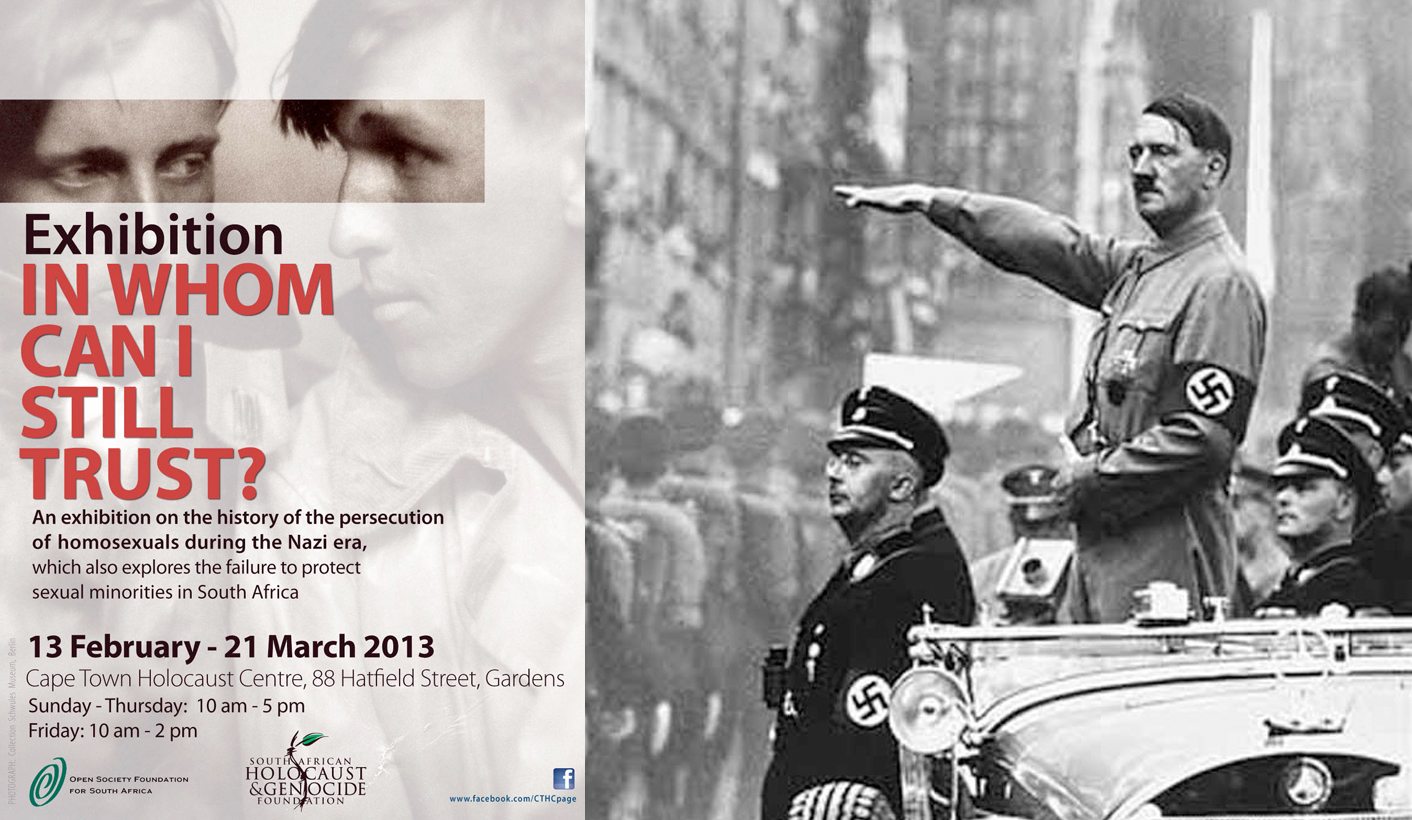 An important new exhibition at Cape Town’s Holocaust Centre reminds us of the sometimes under-acknowledged persecution of homosexuals in Nazi Germany. ‘In Whom Can I Still Trust’ serves a second purpose, too: to highlight the gulf that exists between South Africa’s liberal constitutional provisions for gay people, and the lives of fear and danger that many still endure. By REBECCA DAVIS.

An estimated 100,000 homosexuals were arrested during Adolf Hitler’s regime in Germany. Of these, about half were convicted and sent to prison, to atone for their “crime” through hard labour. Some were released after their prison terms, but between 10,000 and 15,000 – the ones suspected of having seduced more than one partner – were promptly dispatched to concentration camps. There, they wore a pink triangle on their sleeve to mark them out as homosexual. Around 60% of them died.

Today, the pink triangle has become a mark of gay pride, reclaimed as a symbol of defiance and unity in a way that would be far less likely for, say, the yellow star that denoted Judaism. Speaking at the exhibition’s launch on Tuesday night, curator Klaus Mueller argued that the reason why a Nazi invention could become a symbol of gay pride was that there are so few concrete facts or memories about homosexuals in concentration camps in the public understanding. Very few people can call the names or faces of those affected to mind today.

This is largely because homosexuality remained a deeply contested identity long after Hitler was dead. Despite post-Holocaust “Never Again” pledges, homophobic legislation remained on both West and East German statutes until 1969. Homosexual survivors of the camps received neither recognition nor compensation. One survivor, the exhibition records, had his application for compensation rejected because “he was not a victim of nation-socialist injustice”. There have only been three written testimonials published by gay survivors.

As such, an exhibition like “In Whom Can I Still Trust” is clearly necessary to flesh out the missing historical record. At the launch on Tuesday, Holocaust Centre director Richard Freedman said that it had been a “long dream” of the centre to mount such an exhibition. And indeed, because much of the information is not well known, it makes for fascinating reading.

The exhibition was developed by IHLIA, the Homosexual/Lesbian Archive Amsterdam, and it incorporates photographs, archive documents, and testimonies: some of which were given personally by survivors to curator Muller. Chronologically, the exhibition explores the treatment of homosexuals in Germany (and, less extensively, Holland) from the early 20th century to the end of World War II. Under the Weimar Republic (1918 – 1933), we learn, Germany adopted a raft of social reforms, including introducing voting rights for women. And gay people had it pretty sweet, at least compared with what was to come. The world’s first gay film, Anders als die Anderen (“Different from the others”) was made in Germany in 1919. Berlin, at that time, had more than 100 gay bars.

But within 15 years, all was to change. In 1933, homosexual organisations were dismantled, and gay bars and magazines were banned. In 1934, Hitler ordered the execution of Ernst Rohm, a known homosexual who was leader of the SA (Sturmabteilung, the paramilitary brown-shirts). After this, a special department was set up within the Gestapo to focus exclusively on targeting male homosexuals. The Nuremberg Laws of 1935 made it possible to arrest men merely on the suspicion of homosexuality. Lesbians had it a little easier, because they were regarded as invisible. But, as Mueller pointed out on Tuesday, central to Nazi ideology was an emphasis on motherhood and traditional gender roles. Consequently, many lesbians entered fake marriages with friends in order to escape detection.

By 1936, homophobia had become a firmly entrenched national-socialist policy, ratified by the foundation of the Reich Central Office For Combating Homosexuality and Abortion. Young students were particularly affected: after being convicted, they could not return to study at any reputable institution. Some were even stripped of PhDs. Over the next three years, well over 20,000 men would be convicted for homosexuality.

How did they manage to make so many arrests? Because the public was all too ready to turn in suspected homosexuals. “The persecution of homosexuals in Nazi Germany was possible on such a large scale because of the ready complicity of society,” the exhibition records. Mueller said that 62% of investigations in Berlin came after tip-offs from friends, family or colleagues. The exhibition includes excerpts of letters sent to the Gestapo: “We have lived in the same house for 12 years but in all that time he has never been out with a girl. Obviously I cannot say anything for certain, but it strikes me as very suspicious.”

Two of the survivors featured in the exhibition ended up emigrating to Cape Town. Wilhelm Tagg, born 1894, was convicted in 1936 and sent to Dachau, and then Buchenwald. He was one of the lucky ones who got out. In the camps, forced castration could also be ordered by commanders. For homosexuals in the SS or the police force, the camps weren’t an option: they faced an immediate death penalty.

The exhibition is fairly small: one is left wanting more, though it tells its story concisely and effectively. Even at this scale, though, what is clear is the extent to which pursuit of homosexuals became a Nazi obsession. The exhibition notes: “In February 1945, while whole neighbourhoods in the centre of Berlin lay in ruins, the Berlin police unit on homosexuality still had 12 civil servants working on tracing homosexuals.”

If only the same diligence that went into tracking homosexuals in Nazi Germany was devoted to protecting homosexuals in present-day South Africa. The exhibition attempts to pair the two contexts, though the union is effected slightly uneasily. While you might expect an overview of Apartheid persecution of homosexuals, the South African resources amount to not much more than a board featuring recent newspaper articles about attacks on gays and lesbians here, and the “It Gets Better” video campaign, where local (mainly straight) celebrities give messages of support to gay teens . A chilling feature, however, is a simple list of all recorded LGBTI murders in the country in the last few years. It is extensive, yet almost certainly drastically incomplete.

UCT Law Professor Pierre de Vos (and Daily Maverick opinionista) spoke to the South African context at Tuesday night’s launch. Noting that the Constitution is a “historic, inspirational” document, he nonetheless stressed that its promises to gay people have not yet been fulfilled, even though privileged people may sometimes feel like they have. “It is often not safe to be any kind of ‘other’ in South Africa,” De Vos said.

He compared the Constitution to a “prophylactic” to ensure that the mistakes of the past are not repeated, pointing out that in the Constitutional Court, the Apartheid past is often invoked by way of comparison. “This exhibition reminds us that when we remember the past, we run the risk of doing so selectively,” De Vos said. “We need to discover an uncomfortable past in which some of us were both oppressor and oppressed” – for instance, everyone who was both white and homosexual.

Speaking of the “moral amnesia” that often settles on societies after trauma, De Vos quoted Evita Bezuidenhout, who once made the point that in South Africa, the future is certain, but the past unpredictable. “We must all confront our unpredictable pasts,” said De Vos, “and not retreat into shame and silence.”

The importance of the “In Whom Can I Still Trust” exhibition, other than shining light on an often obscured part of Nazi history, is the evidence it provides of how fundamentally liberties may be eroded over a relatively short period – particularly in the name of cultural purity. In 1919, Germany was a bastion of liberalism for homosexuality. By 1939, gays were being rounded up and arrested. It’s a stark reminder not to take our freedoms for granted – and to keep an eye firmly fixed on the Constitution. DM

Decolonising the airwaves with Midnight Son